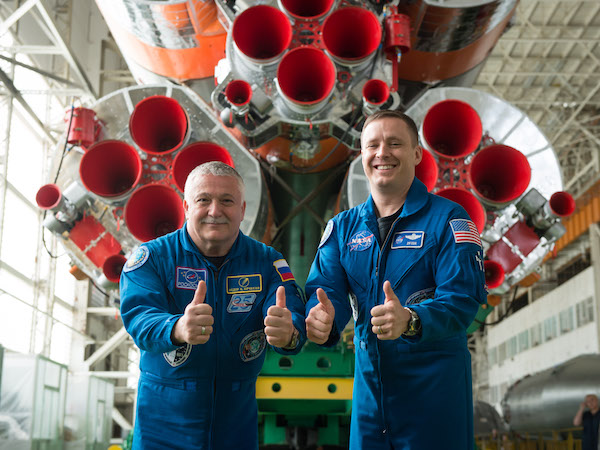 jsc2017e043850 (April 14, 2017) — In the Integration Facility at the Baikonur Cosmodrome in Kazakhstan, Expedition 51 crewmembers Fyodor Yurchikhin of the Russian Federal Space Agency (Roscosmos, left) and Jack Fischer of NASA (right) provide a “thumbs up” as they pose for pictures April 14 in front of their Soyuz booster rocket. Fischer and Yurchikhin will launch April 20 on the Soyuz MS-04 spacecraft for a four and a half month mission on the International Space Station. Credit: NASA/Gagarin Cosmonaut Training Center/Andrey Shelepin

Staying up late tonight watching the stars?  Well, that’s funny,  because two more human beings will be launching into space to join the crew of the International Space Station tonight, and you can watch it happen LIVE.  Space.com reports.

Tonight, April 20th, at 3:13am EDT (1:13am PDT) (0713 GMT), NASA astronaut Jack Fischer and Russian cosmonaut Fyodor Yurchikhin will launch to the International Space Station to join Commander Peggy Whitson and Expedition 51.  The men ‘will take a swift, 6-hour flight.’ They are due to arrive at the orbiting lab at 9:23 am EDT (7:23am PDT) (1323 GMT).   NASA coverage of that docking will start one hour before arrival, at 8:30am EDT. 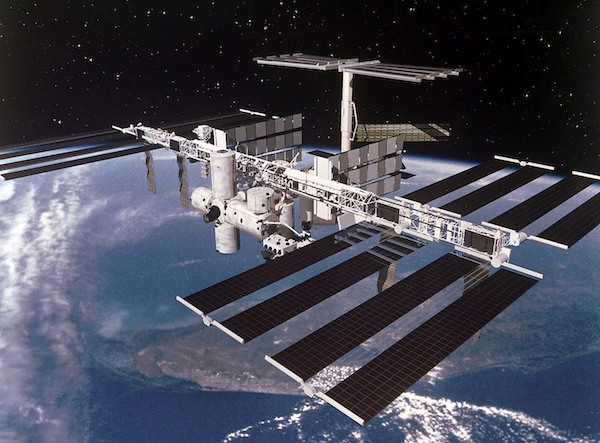 “Expedition 51 will continue work on hundreds of experiments in biology, biotechnology, physical science and Earth science aboard the International Space Station, humanity’s only microgravity laboratory.

” Jack Fischer, a first-time space flier, and Yurchikhin, a veteran of four spaceflights, will spend more than four months aboard the orbiting laboratory before returning to Earth in early September.”