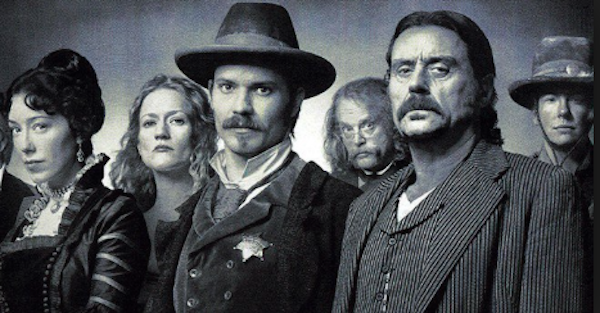 Deadwood fans have something to hold on to.  Ian McShane, Speaking with TV Line has said that HBO has a script for the Deadwood Movie in their hands.  This, according to The A.V. Club.

There have been rumors and intense desires swirling around a Deadwood movie for years.  It looked, for awhile, as though that was not in the cards.  But, in his statement, McShane said that a  “two-hour movie script has been delivered to HBO.”  This is big, big news.

RELATED:  STARZ Has Released the Official Trailer for AMERICAN GODS

It’s well known among rabid Deadwood fans (me and presumably everyone else that saw any portion of that amazing show)  that the cast is in love and on board for a film.  It has not been known, however, that anything tangible was happening around making the thing.  HBO has not confirmed or denied McShane’s comments.  Perhaps that’s because McShane took them to task.  He said of HBO, “If they don’t deliver, blame them,”

Oooooh!  It is on!  All we can really do for now is cross our fingers and wish our deepest wishes.  But, I feel very encouraged that one of my very favorite shows of all time might have some life in it yet.   Don’t you?