THE WALKING DEAD Most Shocking Deaths From Each Season

The Walking Dead season 8 returns in October with the 100th episode of the series. AMC has released a retrospective video highlighting the past 99 episodes and will air a special preview of season 8 next month. This is big deal guys! I’ve already started my TWD marathon!

To commemorate this big event, GGA will take a look at the hit series in many different ways. Think of it as a special countdown to season 8. Here are our picks for the The Walking Dead‘s most shocking deaths of each season. 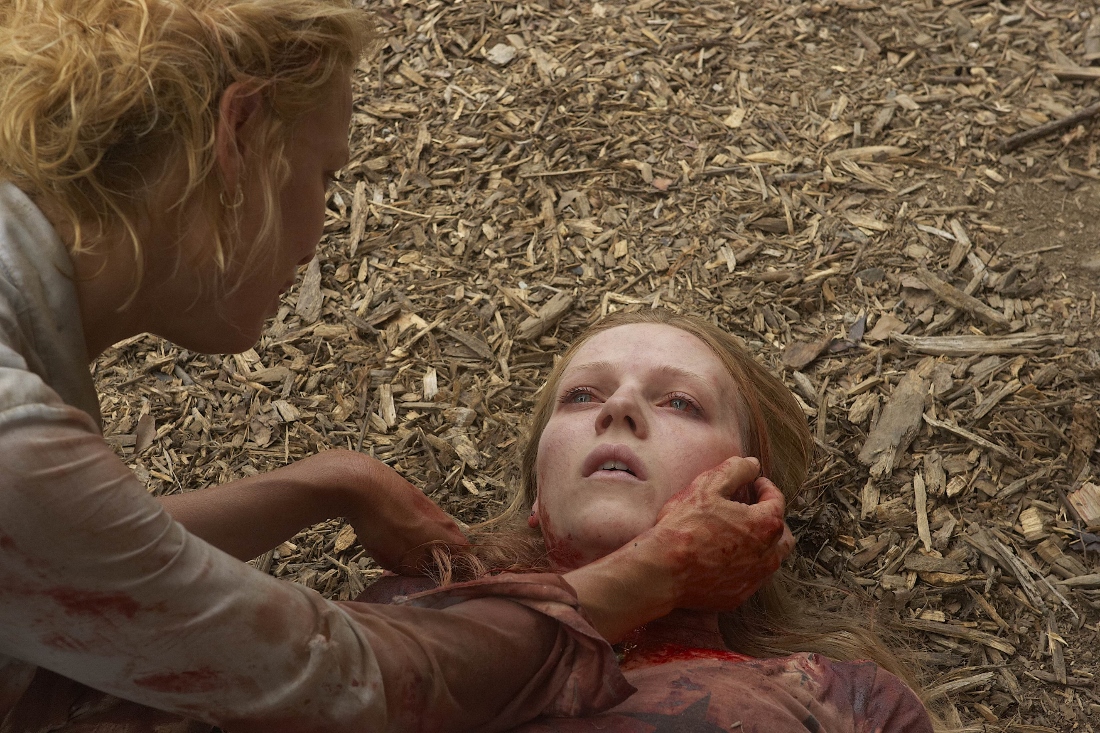 Andrea (Laurie Holden) watches over Amy (Emma Bell) after her death in Season 1 of The Walking Dead, amc.com

A lot of people died in season one…pretty much the whole world.  Amy’s (Emma Bell) death was significant because it was the first time we witnessed someone getting bitten and turn into a zombie…ehem…walker.

We didn’t really get a chance to really know Amy.   What we do know is that Amy was Andrea’s (Laurie Holden) much younger sister. Their age difference is 12 years.  And she died on her birthday. There was no real emotional attachment to Amy, but the show made up for it by focusing on Andrea’s grief for her sister.

Amy died when a group of walkers stumbled upon the refugee camp. Amy had gone to the bathroom in her camper, but was missing toilet paper. When she called out for some, a walker grabbed her arm and bit her.

Andrea held her sister until Amy turned the next morning. It was the first time we saw a dead person reanimate.  Amy’s eyes were glazed over, her skin was very pale, and she growled. Amy reached for Andrea and Andrea shot her in the head. 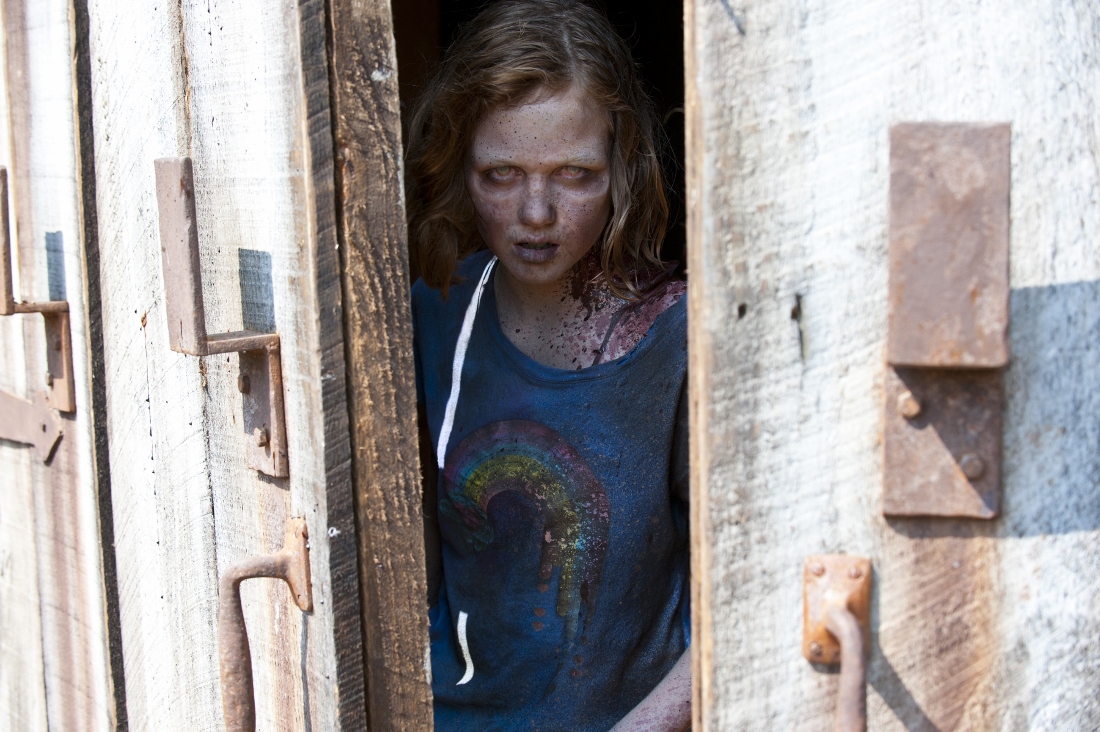 Sophia (Madison Lintz), Carol’s (Melissa McBride) daughter, disappeared in the beginning of season 2.  A walker chased her into the woods away from the rest of the group.  Rick followed her and told her to hide while he led the walkers away.  That was the last time they saw Sophia alive.

This is when the group found Hershel’s farm and were more worried about staying in one place.  Carl Grimes (Chandler Riggs) was shot by a hunter and that took some of the attention off finding Sophia.

When Glenn Rhee (Steven Yeun) announced that the barn was full of walkers, it didn’t take much to figure out that Sophia was among them.

Seeing Walker Sophia emerge from the barn was heartbreaking. First of all because she was just a little girl. Secondly, Daryl Dixon (Norman Reedus) spent the first half of the season looking for her.  He even got shot for Sophia.

It was the first time I felt that none of the characters were truly safe. 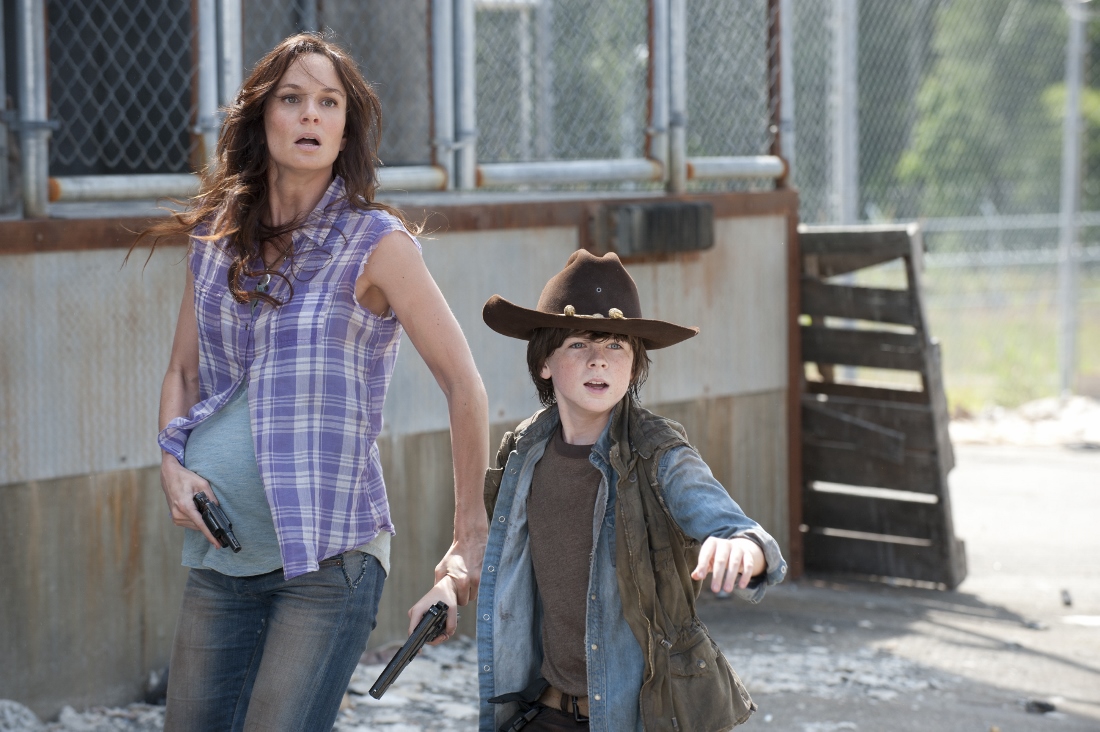 Lori (Sarah Wayne Callies) announced her pregnancy in season 2. At first, she planned on aborting the baby. She asked Glenn to search for medication that would do the job for her.  When she took the pills, she quickly changed her mind and threw everything up.

Rick Grimes (Andrew Lincoln) found the pill package later and confronted Lori about the baby. That’s when she admitted that she had an affair with Shane Walsh (Jon Bernthal).

In season 3, the group found a prison with a few prisoners left inside. One of the prisoners lured a group of walkers into the prison to kill Rick and his group. Lori, Maggie Greene (Lauren Cohen) and Carl were able to escape and hide from the horde. That’s when Lori when into labor.

The cut to Lori’s abdomen was fatal. She passed out from the pain and died due to the blood loss. Maggie took the baby and prepared to find Rick. Before they left, Carl shot Lori in the head to prevent her from reanimating. 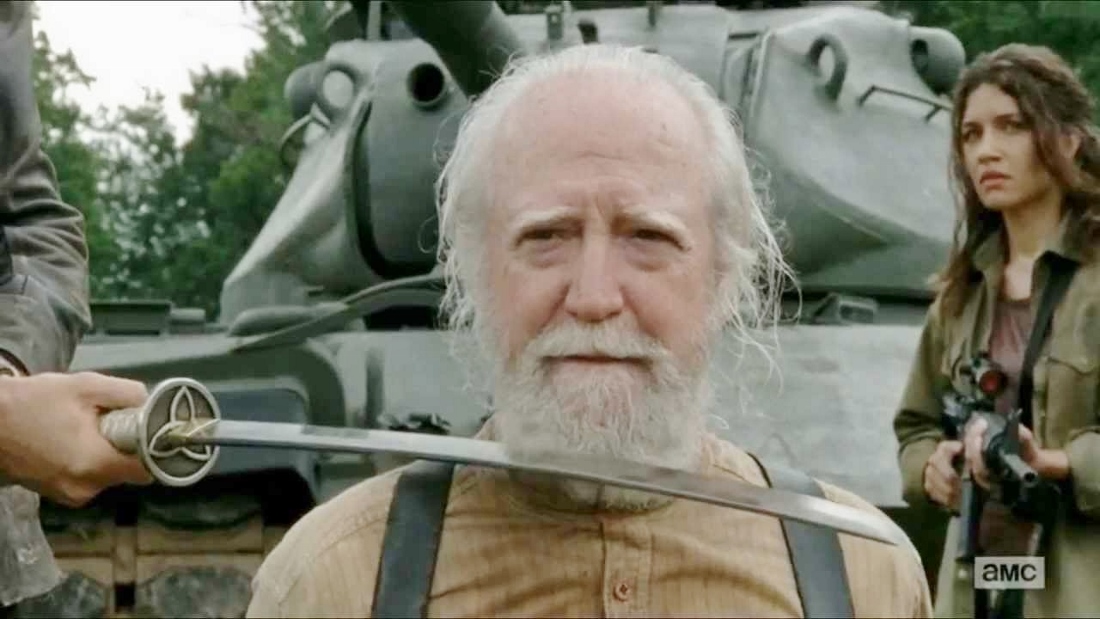 Scott Wilson as Hershel Greene in The Walking Dead, amc.com

Hershel (Scott Wilson) wasn’t the most pleasant when we first met him in Season 2. He saved Carl’s life because it was the right thing to do. Then he told Rick and his people to leave the farm. He didn’t like that they killed the walkers. It was his belief that they weren’t dead. They were all sick and a cure would be found soon. So when Shane and the others killed all of the walkers in the barn, Hershel lost it.

After the fall of the farm, Hershel had no choice but to stick with Rick and the others. He finally saw what the others knew. The dead were dangerous and there was no going back.

If there was one thing that Hershel represented it was basic humanity. He recognized flaws in people, but he also saw their strengths. His relationship with Rick, Glenn, and Maggie established them as leaders. He became their mentor and steered them to always do the right thing.

So when Hershel died, it was as if everything that was good in the world went with him. His death affected everyone. Rick was their leader, but Hershel was their conscience.

Hershel met his demise when the Governor (David Morrissey) cut off his head with Michonne’s (Danai Gurira) katana. 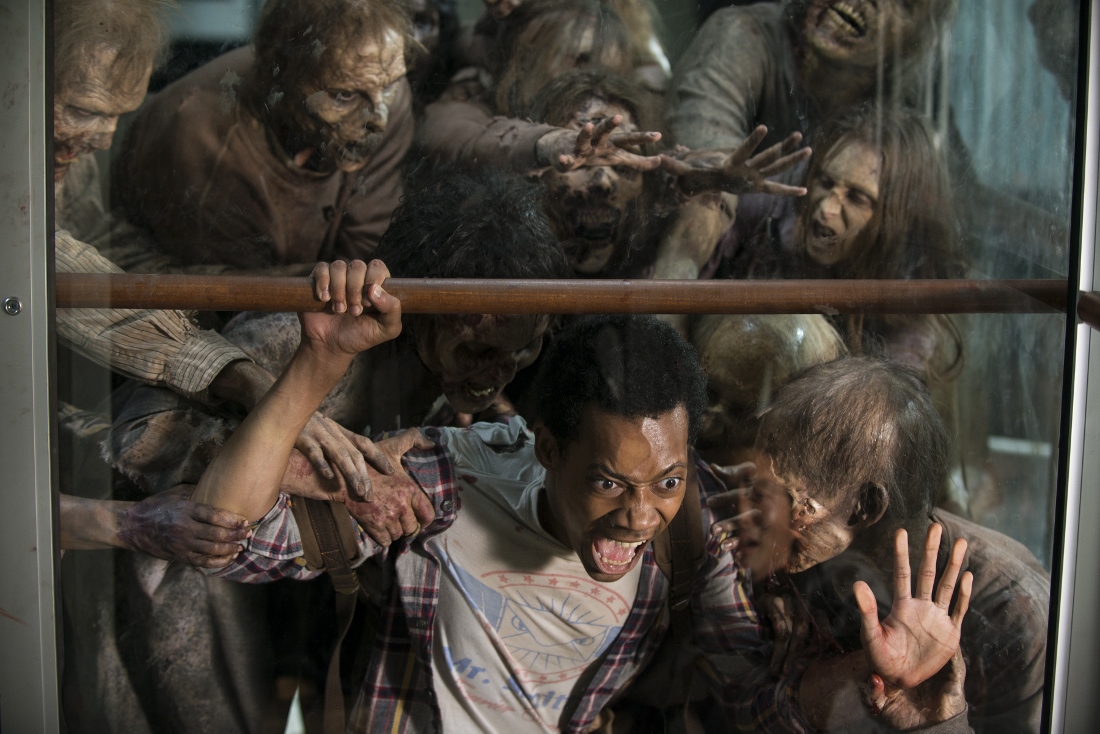 Oh Noah (Tyler James Williams).  We barely got to know him in season 5.  The fans still referred to him as Everybody Hates Chris.  Noah’s death is one of, if not the most gruesome deaths of the series.

We met Noah at the Grady Hospital. He was being held captive there with Beth Greene (Emily Kinney).  Noah escaped and was able to lead Daryl to the hospital. After Beth was killed, Noah left with the group and headed home.

Noah found that his home had been destroyed and his family was dead.  He had nowhere to go. He travelled to Alexandria with the everyone else.

Glenn and Maggie sort of adopted Noah.  He quickly became a part of the family.  Noah saw potential in Alexandria. He was even tasked with figuring out ways to improve the community.

While on a supply run, Noah ran into some walker trouble.  He got trapped in a revolving door with Glenn and Nicholas (Michael Traynor).  Instead of helping Glenn and Noah figure out  a way to get everyone safely out, Nicholas freaked out and bolted.

This caused the door to open just enough for the walkers to grab Noah and pull him out.  Noah was pinned up against the glass. The walkers literally tore Noah apart right in front of Glenn. 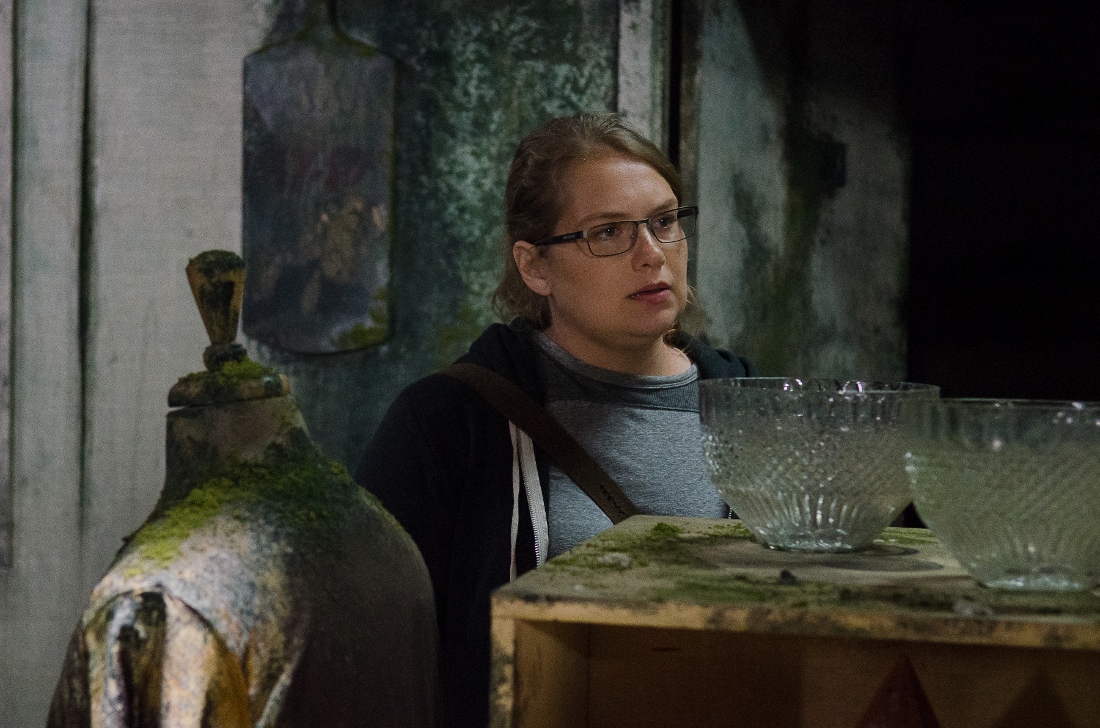 Like most Alexandrians, the outside world made Denise Cloyd (Merritt Wever) very nervous. Denise’s anxiety hit an all time high after Pete Anderson (Corey Brill) died.

Pete was the local doctor and died after he killed Reg Monroe (Steve Coulter). Denise was in medical school when the apocalypse happened, but she was nervous about her ability to administer medical attention to people.

Denise and Tara (Alanna Masterson) became romantically involved. Tara encouraged Denise to be confident in her abilities. Denise wanted to be brave like Tara. She felt the best way to be brave and to do more to help the community was to go on a supply run with Daryl and Rosita (Christian Serratos).

Everything seemed fine at first. They found what they needed and were heading back to Alexandria. Denise found a cooler in a car and attempted to take it. She dragged a walker out of the car with the cooler.

Rosita and Daryl tried to help Denise but she insisted on killing the walker by herself. Daryl and Rosita tell her it that was a foolish thing to do. Denise argues that she needed to face her fears. She says she is capable of being brave just like Tara, Rosita and Daryl. She stops talking when an arrow strikes her in the eye.

Savior Dwight (Austin Amelio) used a crossbow to shoot at the group. The arrow was meant to kill Daryl. 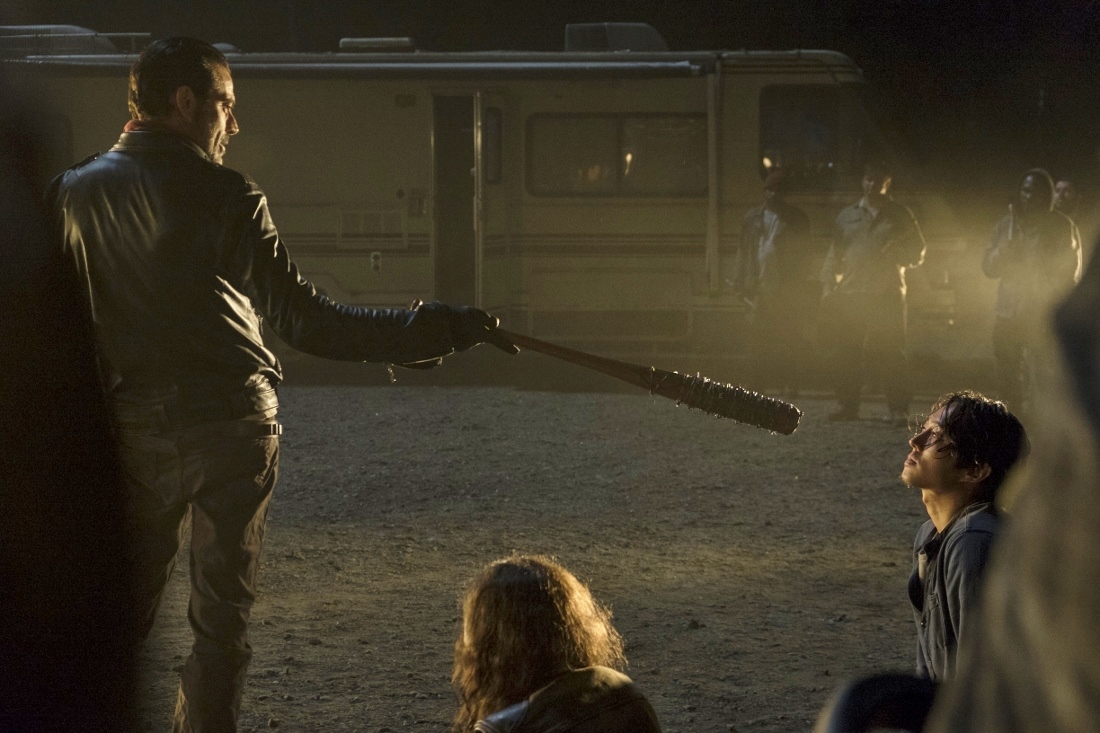 Comic book readers knew about Glenn’s demise at the hands of Savior leader Negan (Jeffrey Dean Morgan). The season 6 cliffhanger left us with the hope that maybe…just maybe Glenn would survive this ordeal.

TWD fans watched Glenn grow from pizza boy into a strong leader in the apocalypse. We watched Glenn fall in love with Maggie and together, they tried their best to keep some goodness in the world. Glenn believed Alexandria was the best place to raise his family and soon after, Maggie was pregnant.

Even though some of us knew he would die, Glenn’s death shook the TWD fandom like no other. Some fans said his death was too graphic and disturbing. Yes, it was. Just like in the the comics. CANON! I miss Glenn’s presence and the grace he brought to the show. There are no characters like Glenn. In a way, he carried Hershel’s legacy with Maggie. He always tried to the right thing.

The only thing I really didn’t like about his death in the show…other than he had to die…is that it was Daryl’s fault that Negan killed Glenn. Daryl punched Negan after he killed Abraham Ford (Michael Cudlitz). Negan told the group that they had to be punished for the hit. That’s when Negan bashed Glenn’s head with Lucille.

The most heartbreaking moment of all…Glenn’s last words..”Maggie…I’ll find you.”

Showrunner Scott Gimple says the pace of season 8 will be quicker and with more action. The group is heading into a war. This means that there will be more casualties. The question is, will the next casualties be at the hands of a walker, or of another member of the living?

Tell us who you think will meet their demise in Season 8.

The Walking Dead Season 8 premieres October 22 on AMC. Stay tuned to Geek Girl Authority for the latest news leading up to the premiere.