Home » Stuff We Like » Dragon Con 2017: Nathan Fillion Starts Friday With a Bang

Dragon Con 2017 started strong on Friday with one of their biggest panels of the weekend. Nathan Fillion, an actor known to science fiction and pop culture conventions goers the world over, opened day one of the show with a sell out panel. Not only did Fillion completely pack the massive Hyatt ballroom (at 10:00am no less, at a convention notorious for its late nights), but he also filled a second overflow room with over 2000 people.

Fillion seemed honest and completely at ease during the hour long panel. He worked the session completely by himself, not leaning on a moderator as he took questions from a seemingly unending line of fans for the entire runtime. He touched on anything and everything in his unending career during the panel. Nothing proved to be off-limits, with everything from  Saving Private Ryan, Two Guys a Girl and a Pizza Place and Castle each being talked about fondly.

When asked about the tricky presence of Chinese required for Firefly, Fillion answered candidly. “We would have our Chinese on a cassette tape. The lady would say it very slowly and annunciate very clearly… Alan (Tudyk) was the worst at it.”

However, he wasn’t shy about showering the ever deserving Tudyk with praise. When asked who he would “flip out” over meeting: “I get a little nervous over meeting Alan now. I marvel at his talent. They guy forgets he did jobs… I love Pixar movies, I go see it, and Alan’s in it!”. Fillion will be speaking later in the evening about Con Man. His pet project with Tudyk will be jumping from Comic Con HQ to Syfy later this fall. 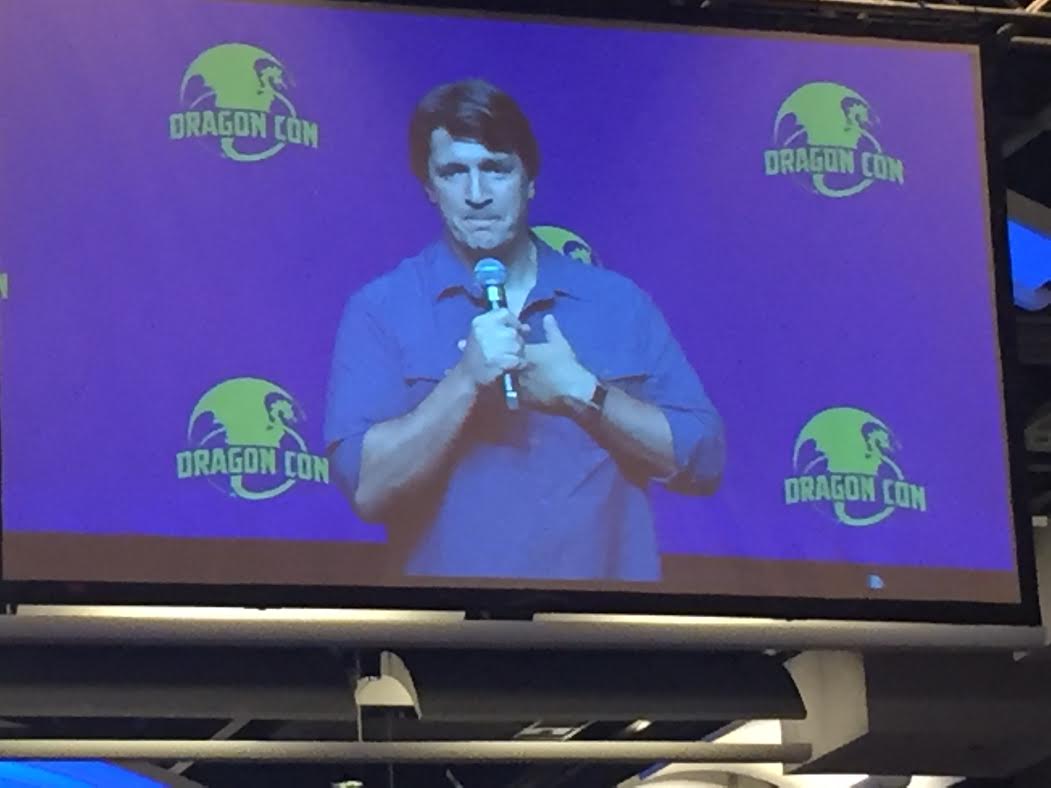 A great moment came when an attendee asked what products Fillion used to maintain his rugged handsomeness:

“My secret is really simple. Keep your distance. My secret to good hair… don’t fight it man… gentlemen, always smell good. I don’t mean axe body spray. If you’re going to wear colognes, two sprays in the air and walk through it. Be clean man, april breeze. (Bursts into laughter) I couldn’t keep a straight face”.

Gaming fans in the panel were ecstatic about the upcoming release of Destiny 2, which is set to hit stores September 6th. Fillion voices character Cayde-6. The actor seemed visibly excited about the project. He handed a pack of special Destiny stickers to a young attendee who asked a question. He also revealed that he also plays the game on both gaming consoles.

Fillion seemed relaxed and at ease during the panel. When an attendee referred to him as “Mr. Fillion”, the Firefly star’s response was  quick, “So formal… call me Your Lordship”. This began a running joke which lasted through the panel. Half the questioners referred to him as “Your Lordship”, with one making a thinly veiled joke (which Fillion pretended not to get) about being on her knees. The actor took everything completely in stride, and played off the audience well in the informal and unrestricted setting.

However, Firefly seemed the most common question topic. When asked who his favorite character to play was, Fillion responded quickly, “Malcom Reynolds”. He later became visibly emotional recounting a story involving actor Ron Glass during the filming of the episode entitled “Out of Gas”. When an exhausted Fillion fell asleep on a bed during the shoot, he woke up to Glass telling him: “Maybe you should do that at home”.

Fillion’s candid honesty and reliability stood out during the panel. As questions came to a close, Fillion looked over the crowd, “I can’t imagine my life without days like this. You guys warm my heart. Thank you”.