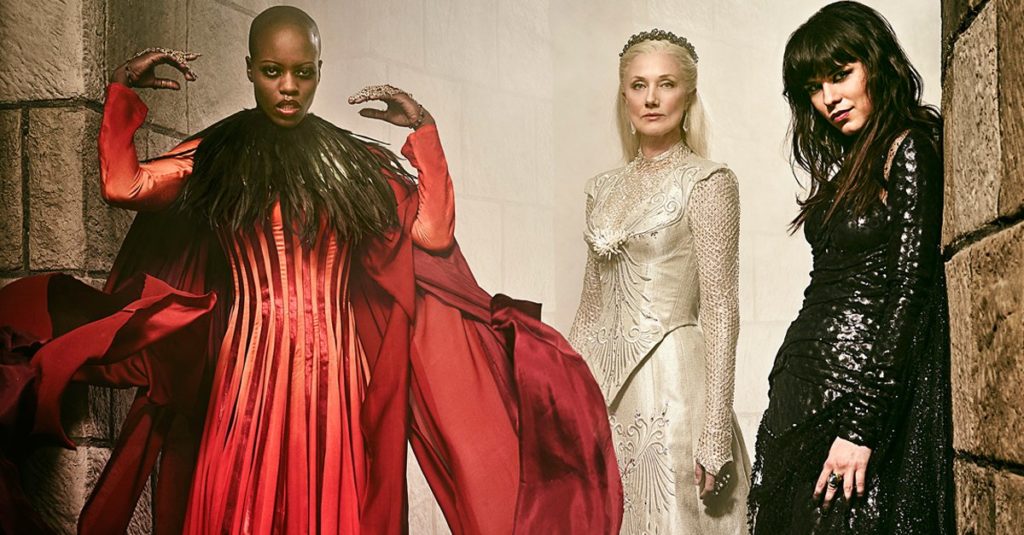 NBC finally gave us a full length Emerald City trailer and this is definitely a new Oz.

Gone is the house, the dog, munchkins, flying monkeys, the Scarecrow, Cowardly Lion, and Tin Man.  Instead we have a car that gets sucked into a tornado and hits the Wicked Witch of the East.  Oh, and she has sisters that will be oh so angry.  But somehow the witch survives?  I’m a bit confused there.  And if we are going to get witches based on the four directions and change the rest of the characters so much, then where is the Witch of the South?

Instead of the Dorothy companions we’re used to we get Tip, Jack, and Lucas.  For the life of me, based on the promo and the marketing materials, I can’t figure out who is supposed to be whom.  In addition to this merry trio we also get The Wizard (I’m assuming of Oz), Lady Ev and some dude named Eamonn.  I would say maybe he is supposed to be Toto, but a K9 dog seems to fill that role.

It’s been a very long time since I’ve read the book, the musical is what’s firmly stuck in my head so maybe I’m not remembering something.  I’m all for changing stories and updating to bring things more in line with the times, but this looks like another one that is using the source material merely as a loose guide.

Oh, and can we talk about the effects?  It continues to be a shame that networks won’t pump in the proper money for spectacular effects.  If you’re going to go full Game of Thrones, then go full GoT and make the effects amazing and not more Once Upon a Time or Grimm.

As least the costume designs and the witches are fabulous!  Seriously, I’m probably going to love, love, love East and West.

In the blink of a tornado’s eye, 20-year-old Dorothy Gale and a K9 police dog are swept into a world far removed from our own – a mystical land of competing realms, lethal warriors, dark magic and a bloody battle for supremacy. Starring Vincent D’Onofrio as the guileful Wizard and directed by the visionary Tarsem Singh across three European countries, this is Oz completely reimagined – a place where familiar characters show up in fresh, unexpected ways, and where an unsuspecting young woman holds the fate of kingdoms in her hands. And as Dorothy navigates this dangerous world and uncovers her true destiny, we’ll see there’s no place like… Oz.

After the trailer, take a look at all the character posters.

Emerald City premieres on NBC January 6 at 9pm, but be sure to check your local listings.

Are you a good witch, or a bad witch? #EmeraldCity pic.twitter.com/i63ign97xC