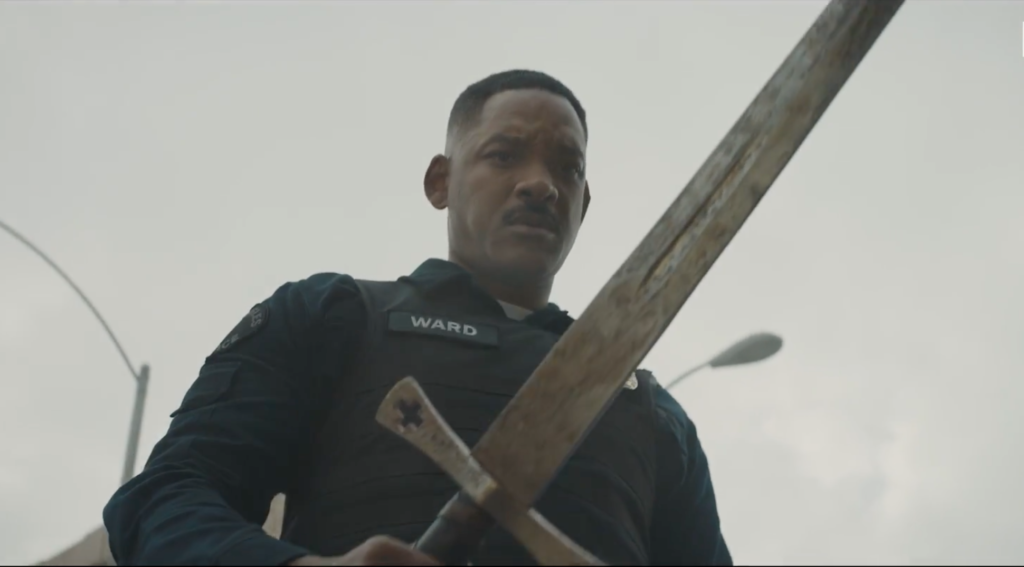 Netflix continues to push the boundaries of the way we consume traditional media, refuting the long held idea that movies are for theaters and episodic stories are only for television.  So far they’ve killed it with their episodic stories, such as Orange is the New Black, Bloodlines, Kimmy Schmidt, Series of Unfortunate Events, House of Cards, and the Marvel Universe.  Recently they’ve turned their considerable clout to movies, attracting big names to deliver quality content across multiple genres.  Their latest offering is Bright, a David Ayer directed, Will Smith and Joel Edgerton staring movie where magic is real and humans aren’t the only race inhabiting this planet.

Bright dives headlong into the urban fantasy genre with the main characters being an orc (Joel Edgerton) and a human (Will Smith) as police partners in Los Angeles.  For those unfamiliar with the urban fantasy tag, it’s a subgenre of fantasy generally characterized by a modern day setting with supernatural/fantasy elements that take place in a large city.  You’re probably familiar with both movies and TV shows that fall under this category.  While not much is yet known regarding the movie, it seems a fairly accurate description of Bright given the summary and the teaser.

Set in an alternate present-day where humans, orcs, elves, and fairies have been co-existing since the beginning of time. Bright is genre-bending action movie that follows two cops from very different backgrounds. Ward (Will Smith) and Jakoby (Joel Edgerton), embark on a routine patrol night and encounter a darkness that will ultimately alter the future and their world as they know it.

Magic is real and out in the open.  Humans coexist with supernatural species and cops probably have some different skills than the ones in our mundane world.  Don’t expect the bumbling golly gee willikers magic is real wide eyed fumbling from Smith.  This is going to be a version of Bad Boys but with magic and actual monsters.

Bright is currently scheduled to hit Netflix in December.