Here we are friends: Gaming Quarter 4 of 2018. As I’m sure you’re well aware, it feels like huge titles and anticipated indies are being released every weekend and that’s because it’s partially true. The last 2018 Quarter of video game releases is absolutely full to the brim of amazing games. If you’re like me, you are desperately trying to find time in your busy schedule to play them all. This month, we’ve got assassins, heroes, cowboys, lego villains, and even Cthulhu! So here’s a look at our Most Anticipated Games for October.

One of the biggest standouts at E3 2018 was Assassins’s Creed Odyssey. Prepare to enter the Peloponnesian War and play as either Alexios OR Kassandra as you fight your way through Ancient Greece. Something that is unique about this Assassin’s Creed title is the ability for players to romance other characters. Another new development in the game is that civilians will now attack you instead of running in fear. So best be careful when attacking mercenaries or soldiers in public areas. These are just a few of the revised mechanics that give the Assassin’s Creed series a revitalized experience. Players felt the change with Assassins Creed Origins (2017), but it really feels like Ubisoft has nailed in this title. Players can look forward to exploring the beautiful islands and landscapes of the Aegean Sea, Naval Battles, interacting with famous historical figures, Spartan-Kicking enemies, and of course, lots of assassin-ing. Assassins Creed Odyssey is now available for the PC, Xbox One, and PS4.

Everyone’s favorite multiplayer mini-game title is BACK with Super Mario Party on the Nintendo Switch! Grab your friends and get ready for some classic Mario Party antics. The game comes with the classic 4-player board game mode, as well as a Nintendo Switch specific 2v2 mode and an Online Mini-Game mode. The Switch’s Joycons add an extra level of fun in over 80 new mini-games. Prepare yourself for rhythm and vibration based mini-games, as well as ones that utilize the motion controls of the Joycon (using a magnifying glass, petting a Wiggler, etc)!  You’ll battle against your friends in free-for-all, team up in 2vs2, and destroy friendships in 1vs3! And for some extra fun, players can pair two Nintendo Switch systems together for Toad’s Rec Room mode! Get the party started with Super Mario Party, now available on the Nintendo Switch. 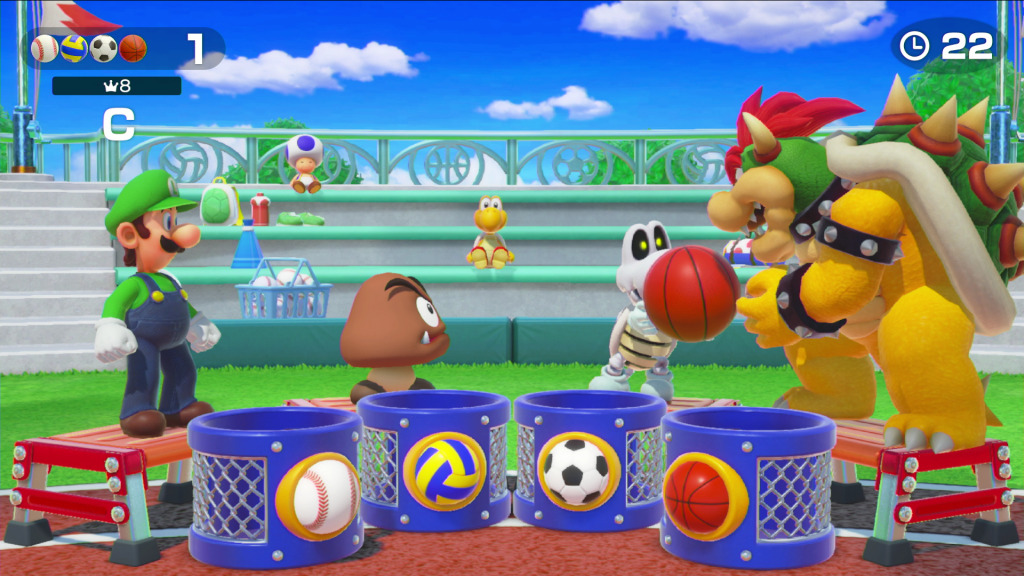 Have you ever wanted to play as your favorite DC Villain? Better yet, as your own DC Villain original character? Well, now you can, in Warner Bros.‘ Lego DC Super-Villains. Team up with Lex Luthor, The Joker, Harley Quinn and many more as you create, destroy, and rebuild the world around you. Fans of the Lego series will find the same brick bashing, collecting, and puzzles that the franchise offers. What makes this title stand out is the incredible customization that players are provided with when creating their Villain. When I played the demo at E3 2018, I could have easily spent the entire time creating the most detailed DC Villain I could imagine. And for DC fans, get ready for an engaging and action-packed story that dives deep into the DC World! Lego DC Super-Villains will be available for the Nintendo Switch, PS4, Xbox One, and PC on October 16.

Join Deku and all of his friends (and enemies) for a fighting game that puts the Plus in Plus Ultra! In Bandai-Namco‘s My Hero One’s Justice, players jump into the world of My Hero Academia and fight against their favorite characters and villains in a variety of stages. Play as Uravity and manipulate your opponent and the stage around them, or suit up as Shoto and pulverize your enemies with a variety of fire and ice physical attacks. Each character has their own unique strengths, outfits, and combos that lead to unique gameplay experiences.  You can even appoint a player as a sidekick, providing extra support or damage during battle.  Additionally, the environments around you can be broken and manipulated throughout your various fights. Fans can pick up My Hero One’s Justice for the PC, Xbox One, PS4, and Nintendo Switch on October 26.

Red Dead Redemption 2 remains arguably, one of the most highly anticipated games of the year (alongside Spider-Man, and Super Smash Bros. Ultimate). Journey through the Wild West as Arthur Morgan, a member of a traveling bandit group, Dutch’s Gang. You’ll travel to various areas of the western United States as you hunt animals, build relationships and morale within the camp, and of course, shoot and loot in town. Red Dead Redemption 2 features far more detail and world-building than it’s predecessor. You can gain and lose weight as Arthur, his hair will grow throughout the game, and your level of cleanliness will affect the characters around you. Additionally, each weapon has its own design, load, feel, and will even get jammed and eventually break. Dead-Eye mode also makes its return, with multiple levels that expand upon the ability. Finally, committing crimes is so detailed, that by taking certain precautions, you can reduce the chances of being found or even acquiring a bounty. And on top of that, every object in this world can be interacted with, creating one of the most in-depth titles of all time. There is not enough space in this piece for me to go into every single exciting detail and gameplay function that Red Dead Redemption 2 has to offer, so you’ll have to play it for yourself to see them all. Red Dead Redemption 2 will be available for the PS4 and Xbox One on October 26.

For all the Lovecraft and RPG fans,  Call of Cthulhu: The Official Video Game is arriving just in time for the spookiest day of the year. Based on the beloved Table Top RPG, this game is a survival horror where you play as Private Detective Edward Pierce. As Pierce, players must set out to Darkwater Island to investigate the mysterious death of the Hawkins family. Throughout the game, players must use their skills to investigate, interact with other characters, and solve the mysteries around then. Your skill levels determine if you are able to gain knowledge or succeed from findings and encounters. If you’re a fan of the Amnesia series, this game has a similar frightening feel. Mixed with Lovecraftian horrors and stories, players can expect a memorable experience that will haunt them in their dreams. Call of Cthulhu: The Official Video Game will be available on the PC, Xbox One, and Ps4 on October 30.

These are only a few of the many exciting titles coming out this October! And before you can even finish getting your hands on these games, November will be right around the corner with its amazing lineup of releases! Do you feel that there are too many releases to enjoy this Quarter? Or the more the merrier? Let us know in the comments below, and we’ll see you back in November with our Most Anticipated Games!