Home » The Daily Bugle » NETFLIX AND MARVEL RUMORED TO BE CASTING MICROCHIP FOR PUNISHER!

NETFLIX AND MARVEL RUMORED TO BE CASTING MICROCHIP FOR PUNISHER!

You know those grains of salt we always tell you take — we’ll get ready to pick up the salt shaker once more because we have a new rumor for you!

The hit Marvel series out from Netflix, Daredevil, introduced us to Frank Castle, a.k.a. The Punisher, earlier this year in their second season. The character was so well received and the actor portraying him, Jon Bernthal, did so well, that the character got his own series. While we don’t have an exact release date yet, we do have this new rumor from MCU Exchange that the series is looking to cast Frank Castle’s long time associate, David Lieberman, better known to us as Microchip.

This is not much of a stretch as at the end of Daredevil’s second season we saw Castle grab a CD with “Micro” sharpied onto it. However, MCU Exchange is claiming, not only that the series will cast this character, but also that casting is currently under way. 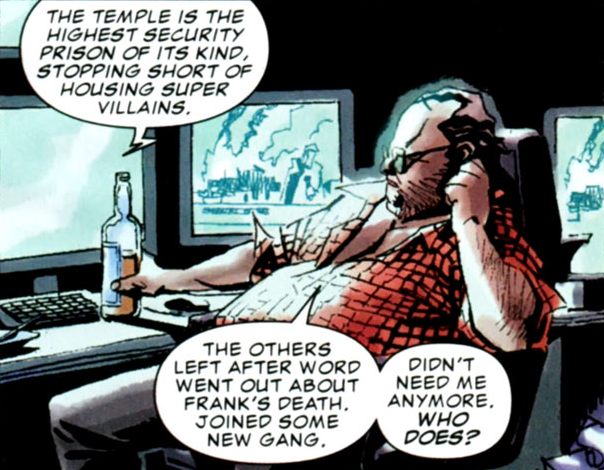 And just who IS Microchip? Well, as his name implies, he’s an adroit hacker who gets mixed up with The Punisher when Kingpin murders his nephew. He works with Castle to help get weapons and safe houses and basically anything that helps him in their ongoing war. Along with that, if anyone can be said to be a friend to The Punisher, it’s Micro.

In fact, the site claims to have a transcript of the sides they are using for the auditions! You can read it below.
Frank: You’re nervous

Micro: What, no I’m not, I’m not nervous, why would you even…

Frank: You keep checking your watch, but you’re not really checking the time, it’s a nervous tick. You might be good with computers and all, but you’d be shit with poker.

Micro: You’re early, I’m just a little surprised is all, I didn’t expect to find you here already.

Frank: Why were you here if you didn’t expect me to be here then?

Frank: I’m not supposed to be found at all.

Frank: You got one minute, then I’m walking out the door and you won’t find me, I guarantee you.

Micro: Okay, okay I understand. Look, first of all, I wouldn’t, I wouldn’t contact you if I didn’t think that you could help.

Frank: Contacting me puts us both in danger. You could have been followed.

Frank: I don’t trust you, I don’t even know you. I should put a bullet in your head right here and now.

Micro: Okay, look, that would not be in your best interest.

Frank: Why wouldn’t it be?

Micro: Your just lucky that I’m a little smarter, and a little faster than them.

Micro: Look we are both in a world of trouble here. We can keep sleeping with one eye open the rest of our lives, or we can make a stand and stop them before they find us.

Frank: I don’t need you for that

Micro: What? We can help each other, we’re in the same boat, and yes you do need me

Frank: I don’t need anybody

Micro: You need answers, though, don’t you? I’m right, aren’t I? You have a lot of unanswered questions.

Frank: I don’t know what you’re talking about

Frank: How do you know that?

Micro: It’s like you said, I’m good at computers, and the like. Look, friend, I know your story, and I know we can make things right again.

Frank: What do you want?

Micro: I want your help. I had a wife and kids, a family, and those bastards, they just took it away from me, and you know what that’s like, and I want my life back. As far as I can figure this is the only way to go about it, but I can’t do it alone. I know my limits, and I need your help.

Micro: Does the name Nicholas Simon mean anything to you? (beat) He’s in town. I know where he is, and I know how to get to him.

Frank: Where is he?

Frank: Tell me where he is.