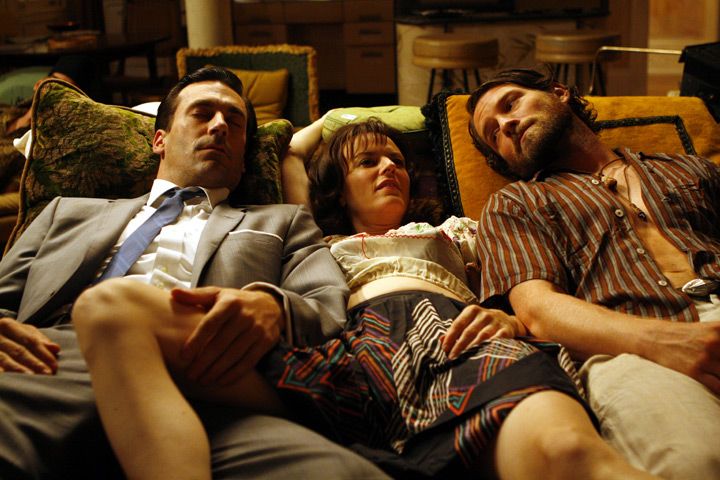 All you need is:

Pour all the ingredients into a glass either before or after the ice – I dunno how urgently you need this Julep buddy – and get yo muddle on. Or, y’know. Just rough it.

And into the episode we go!

Jerk face gets into a lift with a person of colour and I’m literally waiting for him to explode with racism. But it’s okay, because Peggy gets in instead, so he’ll just be really horrible and sexist instead…

Oh wait- no, there’s the racism. There it is. Goodo. Glad we got that out.

Jerk face looks out his office window and appears to be a little teary over something, heck knows what… If it’s supposed to make me feel bad for him – it doesn’t. Because he’s a JERK FACE.  A very polite Peggy makes an offer to make him/get him coffee and WHY PEGGY WHY you know that’s NOT going to be OKAY… Jerk face tells her “do you know how hard it is to see you walking around here everyday” and I feel like asking him if *he* knows how hard it is seeing him be such a Jerk face every day.

So of course his negging (*shudder*) means they have sticky sex on his couch. He tells her afterwards that he’s thought about her “a couple of times” HAHAHAHAHA yeah right.

Joan visits the switchboard girls and pulls the classic make-everyone-like-you-move: she brings pasteries, compliments the girls for how wonderful they are, AND helps the girls visualise the sexy Italian man in the art department who speaks Italian to his mamma. Oh yes. She’s nailing the good working relationships stuff here.

Hamm sausage visits big boss man… in his socks. Big boss man and his shoeless feet present Hamm steak a cheque. He is shocked because it’s a LOT.

The totally-into-Italians Switchboard gal visits the art department just to see her Italian man and it’s pretty darn adorable. She tries to play it cool, and doesn’t actually do that bad a job, but he’s not having any of it. Which is surprising, so I think there’s something going on here…

Jerk face sitting in his office drinking, pondering his jerky-ness (HAHAhaha as if he’d ever do that), and clearly has nothing better to do. If this job still exists, call me. Because I could do a WAY better job at sitting in an office while drinking. Heck, at least I could look GRATEFUL. Where’s my cushy drinking at work job hey?????

Not-Annie visits her Jerk face husband. He gets really unreasonably grumpy at her, and starts blaming everything under the sun as her fault. She interrupts him when he was “busy” so bad wifey. She’s making them fight because she showed up unannounced BAD WIFEY. I really hope not-Annie dumps his Jerk face ass at the end of the season because that would be GREAT.

Draper gets into a fight with the client, and then proceeds to school him like a total legend. The client gets excited about how awesome the campaign will be for him, to which Hamm tortilla laughs “it’s not science, we do our best” because he’s realistic and thinks that saying yes to the client would be stupid. I miss this kind of honesty in business…

Hamm & cheese pasta talks about women claiming men as their property with a kiss and some lipstick, which I’m fairly confident is not what Peggy was going for with her copy for the lipstick. They walk past her desk, laughing and having a good time, because what’s better than treating a gal like a total Loser McLoserton who doesn’t get to laugh and join in even though she made your client happy ARGH. She feels left out and I’m ready to start an #ImWithPeggy support group. 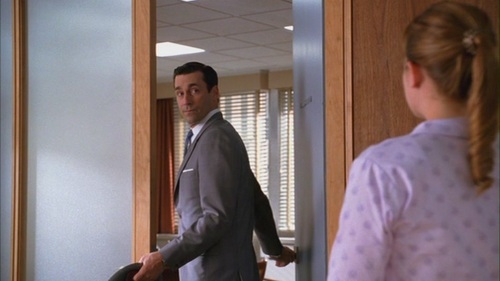 You’re still here?… Who are you again?

They then invite her in under the pretext of getting ice, BUT THEN they offer her a drink in celebration of her awesome copy and hells yeah! #ImWithPeggy!!!! Peggy rushes out to tell the other ladies her exciting news, but Joan gets a little pouty… It’s not always about you Joan, c’mon and celebrate your girl! Peggy goes to Jerk face’s office to tell him the good news and ends up inviting him out with the team to celebrate and SERIOUSLY PEGGY YOU NEVER LEARN. 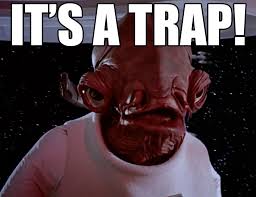 Switchboard lady calls Italian man’s number and (painfully, oh my goodness it’s painful) she invites him out. He is clearly enjoying the attention but something doesn’t feel right and I don’t know whyyyyyyy and my drink has run out.

Glazed Hamm visit’s his mistress but it looks as though she’s having a party and GREAT the freaking hipster is there and there’s a whole bunch of other sorta-hipsters and he is so out of place. He show’s her his bonus cheque and says they’re going to Paris, like, right now. She says they’re going to stay in the apartment and get high and listen to music. He is clearly a man who cares about his sausage because rather than stick to the plan, he agrees.

FLASHBACK FLASHBACK! We’re on a farm and it looks really dirt poor. There’s a traveller on the road who looks like a Hobo and ohhh that’s why the episode has Hobo in the title, he’s finally arrived so this had better be good! There’s an awkward family dinner involving the Hobo. Mother Hamm appears to be a little uncomfortable by his presence, and Papa Hamm is grumpy AF. He does NOT want Mr Hobo there. 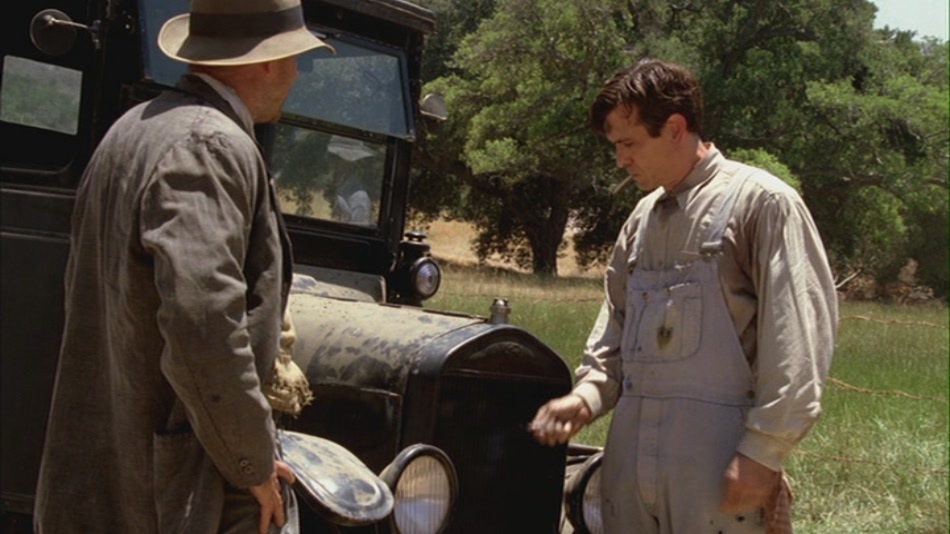 Meanwhile Italian Man has gone out for a drink with another guy and OH GOD HE’S GAY he’s really gay and wow I am just not perceptive this evening, I mean seriously it was *obvious* – my brain has seriously checked out for the day. Switchboard lady is gonna get a rude surprise.

Joan and the whole team (minus sandwich) are having drinks and dancing at the bar to celebrate how amazing Peggy is. Jerk face watches Peggy dance. The girls scream when “The Twist” comes on the jukebox and peggy twists her way over to Jerk face. He tells her he doesn’t like her “when she’s like this”… when she’s happy? When she’s celebrating? When she’s not oppressed and being jerked around? He leaves and she cries while she dances, and totally breaks my heart.

She looks so happy…

Italian man and date-fella have a super intimate finger touch at the bar and I’m on the edge of my seat, it’s so good. I don’t think Italian man has ever been with another man. He quickly freaks out and leaves the bar, his poor date left alone at the table.

Hamm pie has another flashback. He’s talking to the Hobo, saying his mother isn’t his mother, that he’s a whore child (sheesh Don, calm the flock down). Hobo tell’s mini Hamm that death is around every corner here, and I’m wondering if he means that the farm is a dead end, or if it’s just because they have stuff like cows they slaughter.  But tbh it’s gotta be the first because the only thing they seem to be growing is dirt.

The weed seems to be wearing off… back in his mistress’ abode, the hipster says that “love is boujoire”. There’s a hipster vs. Don world argument – and it’s kind of intense but in a weird way, because they’re still both REALLY high.

Adult Hamm tries one more time to get his mistress to go to Paris but she declines. So he gives her the entire cheque, as you do. WHAT!? He gives up and goes home. The Draper kids are asleep in bed, looking like little angels full of sweetness and love. So he decides to WAKE UP HIS SON. “Ask me anything?” Sure, I’ll ask you a question. What has two thumbs and will murder a baby if their sleep get’s interrupted? THIS WRITER.

Poor kid. He hugs his dad. So. Much. Therapy…