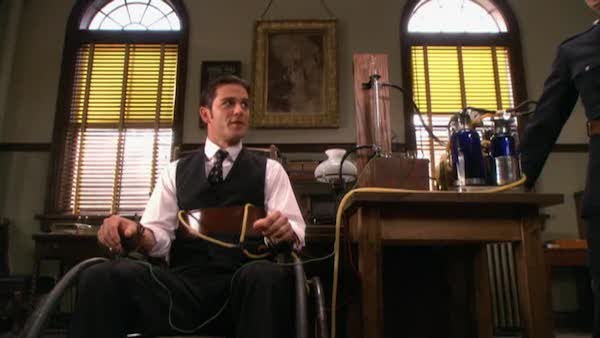 “Still Waters” opens on a quiet river. A group of children playing hide and seek stumble across a body of a young man. They poke him with a stick. As the realization gradually sets in, the boys run from the scene screaming.

Meanwhile, at Station House 4, Detective Murdoch (Yannick Bisson) shows the men his latest invention. Calling it the “nomograph,” he describes it as essentially a lie detector. The reactions vary, ranging from Inspector Brackenreid’s (Thomas Craig) all out skepticism, to the men’s uncertainty. The test of the machine proceeds smoothly until Dr. Julia Ogden (Helene Joy) enters. The men, knowing their Detective’s feelings for Dr. Ogden, immediately insist that she should ask the questions. The camera stares at Murdoch through his device, and viewers watch each and every excited fluctuation in the devices measurements. The moment ends quickly as a whistle blows. The police have discovered a body at the river.

Later, as they stare at the body, Julia makes a quick pronouncement. She finds that body had been in the water for less than 8 hours. As they turn it over, they learn that not only was he a professional rower, but he’s Richard Hartley (Christopher Cordell). The Hartley’s are a prominent banking family in town, and this is going to be an important investigation.

Later, the body is officially identified by Hartley’s fiancee, Minerva Fairchild (Charlotte Sullivan). She mentions the last time she met her fiancee was over lunch after a morning training session. His rowing team is hard at work training for the Olympics. Furthermore, she recounts that Richard had recently argued with his coach, Hamilton Cane (James Downing). “They didn’t always see eye to eye on matters”.

Murdoch finally gets the results of the Dr. Ogden’s post-mortem. Julia informs him that Hartley’s cause of death was most definitely drowning. She has also learned that the murder weapon had a hard edge.

The Detective goes to the club, where after a brief squabble with the concierge, he’s finally able to interview Coach Cane. When Murdoch mentions the argument, Kane shrugs it off, seemingly not thinking much about it. He looks around, saying “These boys are like family, Detective”. Murdoch quickly points out that conflict arises in even the closest of families. Murdoch works his way through the team, talking with each of Hartley’s teammates. However, the boys are flippant. There’s talk of drinking, and general brevity before the murder. They each finger a young man name Horace Briggs (Corey Sevier) as someone Hartley had trouble with. In fact, Hartley had recently replaced Briggs on the rowing team.

As Murdoch questions Briggs, the boy seems down to earth and hardly capable of murder. He’s somehow different than the other boys. As Murdoch presses him for an alibi, he discovers that the young man had been home with his Mother as he had to work the next day.

Later, as Constable Crabtree (Jonny Harris) and the Detective return to the clubhouse, they stop a passing waiter. George exclaims excitedly, “Sir! You have to try one of these. I’ve had four already this morning. It’s the damnedest stuff… coffee. It’s big in Europe apparently…”. As Detective Murdoch takes a small sip, he pronounces it a failure. “Why would anyone serve this when we have tea? I don’t see this catching on”.

Dr. Ogden meets Murdoch at the club, where she happens to be a member. She brings a sliver of wood which she managed to extract from Hartley’s wound. The murder weapon was a rower’s oar. Together, they go through the locker room, and find an oar conveniently stashed in one of the lockers. There’s blood on the wood, and it’s still wet. However, there’s a problem. Not only should the blood be dry, but as Murdoch examines the wood, it is not a match to the sliver pulled out of Hartley’s body. Could someone be trying to frame Briggs?

Questioning Briggs, Murdoch tests the young man. He’s wide eyed and earnest in his claim that he would never say or do anything to risk loosing his spot on the team. He would loose his access to the club, and the club was all he had.

As Murdoch recounts Brigg’s answers to Julia, he details his findings that Hartley had been hazed While Julia can’t speak to where the event might have been held, she knows someone who can.

Returning to the club, Detective Murdoch meets with Julia’s friend Dr. Isaac Tash (Steven McCarthy). Julia has known known him since medical school. Tash tells Murdoch, “We were young, foolish, and full of passion. She was quite the pistol”. As the two men walk and talk, they arrive at the spot. Murdoch not only finds splinters of wood, but a trail of blood leading to the water. This is the missing crime scene.

Once again, Detective Murdoch tries to roust information from the rowing team. However, when the boys remain silent, the Detective tries another tactic. He throws the boys in jail.

Searching for a solution, Murdoch looks to his new-fangled lie detector. This might be their best option to coax out a confession. One by one, Murdoch hooks the boys up to the machine. As they work their way through the group, the truth begins to emerge. Robbie Driscoll (a pre-everything Robbie Amell) admits that it wasn’t an accident. Coach Kane orchestrated the planned assault.

Confronted with the story, Kane admits that he didn’t want Hartley on the team. In fact, he believed that Briggs was their key to winning. However, when Hartley wouldn’t step down, Kane instructed the team to go extra hard on Hartley’s initiation. He says that Richard panicked and ran into the water in an attempt to get away. He also admits to framing Briggs for the crime.

However, there’s one thing which doesn’t add up for Detective Murdoch. The shoreline where the hazing happened was sandy. Why was there clay under Hartley’s fingernails? As he moves across the shoreline, Murdoch quickly realizes that Hartley actually survived the beating.

Returning to Dr. Ogden, they continue to discuss the case. Detective Murdoch hopes to examine the water in Hartley’s lungs. As Julia works to drain the lungs, they talk. The relationship bubbling under the surface comes to ahead as they suddenly kiss. The kiss is long, passionate and heated. And then Detective Murdoch snaps out of it. He was daydreaming again.

As George and Detective Murdoch study the lung water, they find remnants of bath oils. The only possible place bath oils could have been used would have been in the guest houses of the club. Later, as they investigate one of the houses, they discover broken glass and blood. It’s another crime scene.

Complicating matters further, the guest room was set up to accommodate a romantic evening. The only possible next step is to talk with Minerva. Speaking with the young woman, she admits to preparing the romantic scene for Hartley. She lit candles. She poured wine. However, she’s somber as she says, “I didn’t choose Richard Hartley. Richard Hartley chose me.”

When a beaten and bloody Richard Hartley stumbled into the guest cottage, Minerva chose that moment to end their engagement. However, “You don’t say no to a Hartley”. Her decision sent him into a rage, but she states that he stormed off. Very much alive.

Later, as Murdoch takes an additional look at the lung water, he discovers chunks of phosphorescent bone. It’s fertilizer. Seeing a crack in the case, he returns to speak with Briggs. It turns out, Minerva and Briggs were having an affair. Faced with the thought of his lady love in prison, he confesses to the murder. He recounts how Hartley had discovered the affair. In a showing of dominance, Hartley kicked Briggs off the team; thus fueling the events of the murder.

Not only had Briggs lost his seat on the team, but also the woman he loved. As such, he took matters into his own hands. Angry at the turn of events, Briggs jumped Hartley as he drew a bath, drowning him.

As the episode ends, Julia comforts Minerva. While the two women talk quietly, Julia insists the distraught girl did nothing wrong. She didn’t ask for the men to commit murder for her. Later, as Detective Murdoch arrives, he and Julia agree to go for coffee, there’s a lovely Turkish brew at the club.

Murdoch Mysteries airs Monday nights on CBC. Season 10 premieres on Ovation here in the United States on January 9th, 2017. Viewers can catch up with previous seasons on Netflix and Hulu.