Daredevil, the next big Marvel series out of Netflix, premieres next Friday and it’s publicity machine is in full swing.

Today, we got two new motion posters, which are basically just really cool gifs. The first one shows Daredevil’s cowl covered in blood, held by a hand that is presumably The Punisher… though that would imply that it’s the Punisher that’s bleeding, right?

The second one sees a bloodied and beaten Daredevil on the ground, taking a knee, defeated, while the Punisher walks away from him, presumably the victor of this fight. In the background is a glowing neon cross that reads, “Sin will find you out.”

We also have a high-def version of the billboards in Toronto showing off our heroes/villains new costumes. Punisher with a minigun in high def. The nerds won. This is proof. 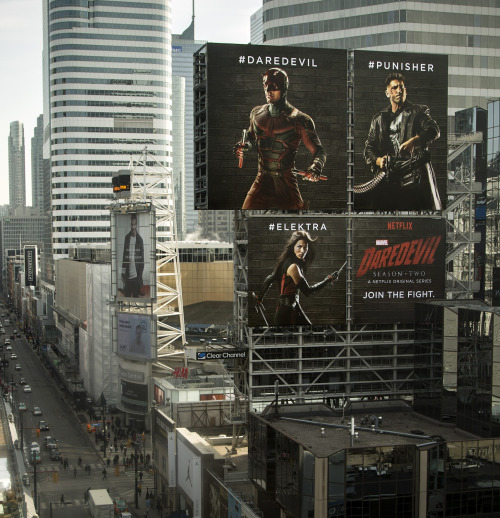 Friday! I'm delighted to be saying comedy words at #GameNightVarietyShow with my co-host @LaserMWebber and awesome guests @audreykearns, @KimEvey, and @danaswanswan! There will be music! BYOB! A cat might wander in to the theater! $5 tickets in advance: https://www.eventbrite.com/e/game-night-a-variety-show-comedy-comics-music-games-tickets-94538391875

Happy Monday, folks!
Let's embrace our ups and downs this week! -- like Billy Dee Williams said: "Failure's not a bad thing. It builds character. It makes you stronger."