X-Men: Apocalypse, the upcoming Marvel film from Fox featuring everybody’s favorite mutants, has released another poster this week. In it, we see Professor Charles Xavier (James McAvoy) along with his most gifted students.

Featured most prominently is Mystique, played by Jennifer Lawrence. Standing right behind her is Hank McCoy, a.k.a. Beast (Nicholas Hoult) and Pietro Maximoff (Evan Peters). 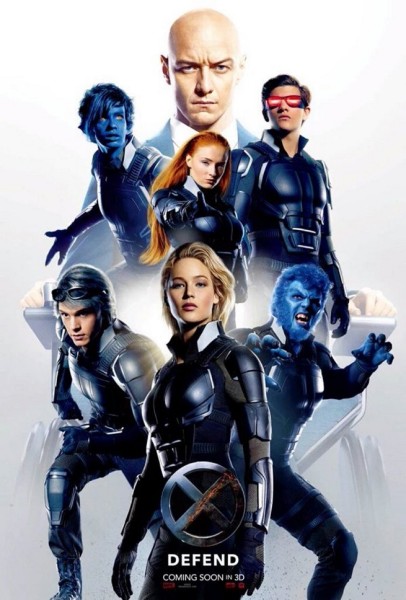 While we know Mystique and Beast will have prominent roles in the film, and that Quicksilver has another super speed sequence that will top the from Days of Future Past, it’s been a bit of a question just how big of a role our other heroic mutants would have. But here, perhaps, is an answer to that question as they are featured on this poster right along with Professor X himself.

We see Sophie Turner as Jean Grey, her hand out, no doubt controlling someone’s mind. Right behind her is her future boyfriend Cyclops, played by Tye Sheridan, with his special ruby-quartz glasses on to help contain his optic blasts. And finally, we have Nightcrawler (Kodi Smit-McPhee), our blue elfin character who looks ready to bamf out of this scene.

The entire team is outfitted in the same dark battle armor we’ve seen from the trailers, though this might be the first time we’ve seen Quicksilver wearing it.

This poster appears to be a direct response to the one released earlier this week that showed Apocalypse and his Four Horsemen. Where that one said “Destroy”, this one says “Defend.” It’s entirely possible that, much like what we’ve seen with the Captain America: Civil War campaign, these posters are all being released as a way to amp up the hype for the film with a new trailer to drop soon.

After all, X-Men: Apocalypse hits theaters just a couple weeks after Civil War.