Home » TV & Streaming » GOTHAM ‘The Things That Haunt Us’ Will See Return of Cameron Monaghan as Jerome/Joker!

GOTHAM ‘The Things That Haunt Us’ Will See Return of Cameron Monaghan as Jerome/Joker! 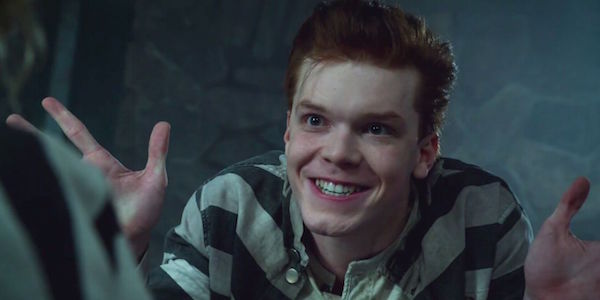 On Fox Television’s Batman prequel series, Gotham, it appears that we can expect to see Cameron Monaghan making a triumphant return as Jerome Valeska. If you think back to the season premiere for the second season, Theo Galavan killed Jerome on live television in order to paint himself as the saintly hero Gotham needed. This of course was all in a bid to get elected Mayor of Gotham and then take down Bruce Wayne as part of a centuries old vendetta between families.

The surprising thing about this at the time, of course, was that Jerome was supposed to be the kid that grew into Batman’s biggest arch-enemy, The Joker. However, it appears that maybe that Jerome is less dead than we all imagined.

According to the plot summary for the upcoming midseason premiere, Monaghan will be reprising his role after one of his acolytes finds a way to bring him back to life. Apparently, on this show, once your dead, that doesn’t matter because you can still come back to life.

This, of course, happens while Gordon is on the run after killed Mario Falcone and the Penguin is having problems as mayor.

“THE THINGS THAT HAUNT US”
AN ALL-NEW “GOTHAM” MONDAY, JANUARY 16, ON FOX.

Falcone places a hit on Gordon after learning that he shot Mario. Gordon and Bullock discover a follower of Jerome (guest star Cameron Monaghan), who plans to bring him back to life. Meanwhile, Penguin spirals out of control before the biggest television interview of his Mayoral career, and Bruce and Selina deal with Selina’s mom’s return to Gotham in the all-new “Mad City: Ghosts” episode of GOTHAM airing Monday, Jan. 16 (8:00-9:01 PM ET/PT) on FOX.”