The Agents of S.H.I.E.L.D. are back, but the team is “Missing Pieces.” At the end of season five, the team dropped off Phil Coulson (Clark Gregg) and Melinda May (Ming-Na Wen) on an island paradise. Coulson did not have much time to live and wanted to go peacefully.

RELATED: Things to Know Before the AGENTS OF S.H.I.E.L.D. Season 6 Premiere

Fitz and Enoch (Jeff Stoffer) were in space for 104 days when they were attacked.  Fitz is still in the cryo-chamber and Enoch is trying to calculate his chances of survival. The bigger alien ship cuts Enoch’s ship in half, causing a lot of damage.

The space team is forced to land the Zypher on a planet that looks like a junkyard. They are greeted by a few hostile aliens, who are scared of Quake. And rightfully so. All but one of the aliens run away from her and the last one gets chained upside down.

The alien is somewhat of a smuggler. He found one half of Fitz’s ship and sold it for parts. So the other half of the ship has to be on the planet. The team finds the other half of the ship and quickly look for it. They find the cryo-chamber, but no Fitz. He got out of the pod because there are three bloody fingerprints on the window. And the sad part is, there is no indication about where Fitz could be.

The others discuss their worry for Simmons well being. She has never let doubt set in. Daisy wants to return to Earth and regroup. Davis and Piper agree. Simmons comes in and shows them the message she found. She can read the alien script and it is from a place called Naro-Atzia. Simmons thinks that’s where the chamber was made. She thinks Fitz would go there to try and find a way to refreeze himself. The only problem is, it’s too far into space. Simmons prepares to go to Naro-Atzia, but the rest of the team wants to go home.

While they are arguing, an alarm goes off. The Confederacy has been chasing them through space and has caught up to them. Daisy and Simmons turn off the power so they aren’t detected. They reconvene in the Zephyr cockpit and watch the Confederacy ship go by. The Confederacy detects the Zephyr, so the space team is forced to leave the area. Piper prepares the ship to jump and Daisy prepares to put in the coordinates back to Earth. Too bad Simmons beat her to it.

Mack has set up S.H.I.E.L.D. HQ at the Lighthouse. Mack and his team are watching for some strange readings around the globe. May leads a team of quinjets to find out what’s causing these readings. They get a strong reading at a park where a big burly man named Jaco (Winston James Francis) steps through a concrete wall. A second man tries to step through, but gets caught in the concrete and dies.

May’s jet arrives at the park and she tries to make Jaco surrender. Instead, Jaco shoots one shot a the quinjet, making it crash. Back at HQ, Mack isn’t happy that the traveler got away, but he is happy that everyone is okay. The problem now is finding out how this guy and maybe others like him are causing these distortions. One of the new guys, Agent Keller (Lucas Bryant) says the distortions are happening on Ley Lines or energy lines across the Earth in some sort of pattern. It’s just a theory, but it’s the only one they got. Mack tells the team to research that theory more. And he wants Yo-Yo and May training for battle.

Mack goes to his office and watches messages from Coulson about being a good leader. May checks in with him. She presents him with a proposal and he’s willing to move forward with it. First, she has to find a department head. Mack reminds her that the next day is the anniversary of Coulson’s death, but May doesn’t want to talk about. She changes the subject by promising him an update soon. Mack commends her for her work in recruitment. He says they have the muscle, now they need more brains.

Yo-Yo and May take a quick break from training and to talk about how cute Agent Keller is. May thinks Keller is attracted to Yo-Yo and encourages her to go out with him. But what about Mack? Well, after Coulson named Mack the director of S.H.I.E.L.D., Mack threw himself into to work, shutting out Yo-Yo. They broke up. It happens. She insists that Keller isn’t her type, but he could be.

Later, Keller asks Yo-Yo for permission to go through some research on the Ley Lines theory he presented. She gives him the okay and lets him know that May knows or is starting to suspect something. They decided to put the brakes on their fling before someone finds out. Someone meaning Mack. Mack doesn’t know and Keller respects him too much. Huh?

May tracks down Mack at a local bar, his grounding place. She has found a director for her proposal and the first candidate is at the other end of the bar. Dr. Marcus Benson (Barry Shabaka Henley) is an old friend of May’s ex-husband’s. Dr. Benson is a bit standoffish at first. He doesn’t really like spies. The only reason Benson is there is to have a drink in memory of the love of his life.

Mack empathizes with him, telling him about Coulson. He says they tried to fill the void he left behind to rebuild. They need smart people like Benson. Mack tells him about their plans to build a S.H.I.E.L.D. academy. It would be a second chance for both S.H.I.E.L.D. and Dr. Benson. Benson is skeptical and thinks he’s too old to be dealing with boogeymen. It’s when Mack tells him that their brightest minds are in space that Benson actually looks interested.

Meanwhile, Jaco sits in the woods, eating an apple and waiting. Two more people, Pax (Matt O’Leary), and Butterfly (Brooke Williams) appear out of nowhere. They mourn the loss of their following comrade in the concrete wall, but quickly move on. They have one more team member to look for, Sarge. He is expected to show up at a museum. 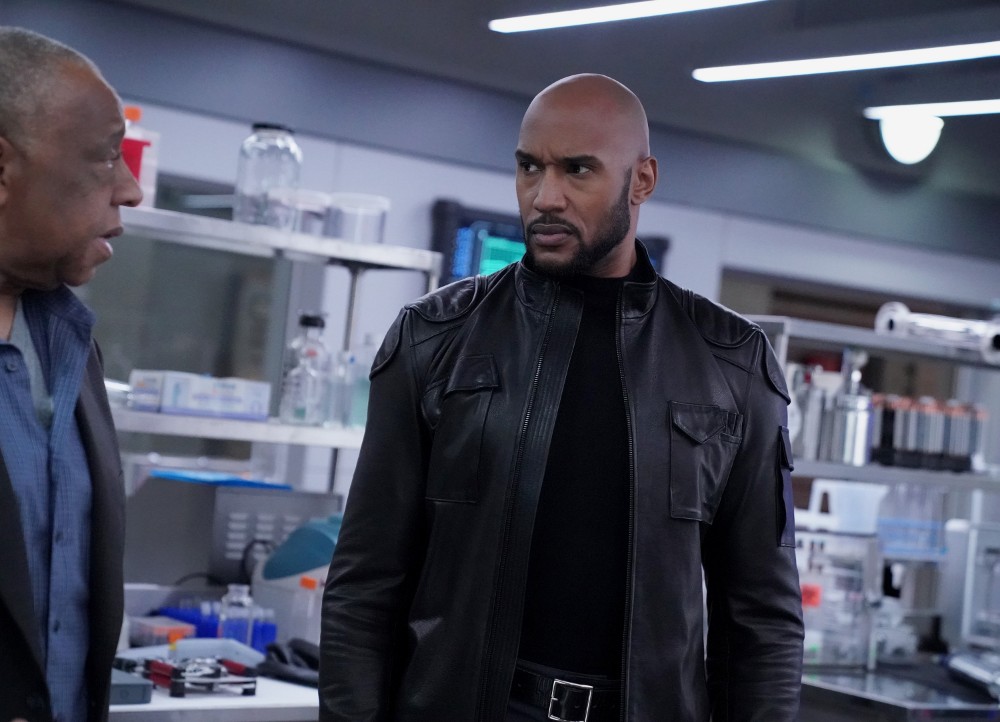 Mack shows Benson the piece of concrete with the man inside it. Benson finds what he thinks is a camera when the man reaches out and grabs him. Benson breaks free and the man tells Mack that he can’t stop it. It is coming. Pachakutiq. The man freezes up and dies before he can say any more, but a device falls out of his shirt. It’s some kind of communicator with coordinates listed on it.

Mack has his team find out where the coordinates lead. May and her team prepare to encounter the Jaco. At the same time, Jaco and his team arrive at the museum. The Agents encounter the hostiles at the museum. Butterfly pretends to be injured to give her team time to set up their equipment. She tells the agents that hostiles have her son. Keller pulls her to safety. She turns to an agent and tells him that he will be a butterfly soon.

A burst of light comes out of the sky, causing the museum to explode. The agents are scattered and disoriented like a bomb went off. An agent tries to detain Butterfly while May checks on Yo-Yo. Yo-Yo’s ears are bleeding but she tells May to go check on the others. A big truck comes out of nowhere almost running over May and crashing into the S.H.I.E.L.D. vehicles.

A man gets out of the truck and walks toward the agent and tells the agent to let Butterfly go. The agent is confused because he sees Agent Coulson of S.H.I.E.L.D. The man shoots him and says he’s never heard of S.H.I.E.L.D. May watches from afar, unable to move at the sight of Coulson’s face. The man and Butterfly get into the large truck and leave.

Somewhere…in some kind of metal shop, a man stands in the dark while someone bangs on the door. They are speaking in an unknown language, but the man tells his friend to give him a minute. The man injects himself with some kind of substance and turns around. It’s Fitz! The substance changes his eyes and he’s ready to go.

Wow! So much has changed, yet stayed the same. It’s so sad to watch Simmons try to remain hopeful that she can find Fitz. I wonder how many roadblocks she has hit the past year.

I like the idea of reforming SHIELD. It seems like they are off to a good start. Mack really needs his team to step up their game though because I think this Coulson doppelganger may be more dangerous than he appears.

I was shocked to find out that Mack and Yo-Yo broke up. If anything, I would have thought that Mack would need her more as director. Sure they are all sad about Coulson’s death and feel a little powerless without Daisy and FitzSimmons on Earth. All the more reason that Mack should have leaned on Yo-Yo a little more.

I have so many questions about the Sarge, his team and their mission. I hope we don’t have to wait long to find out what they are up to. And I really hope it doesn’t take Simmons long to find Fitz.

Quibi Launches April 6th, Here’s a Complete List of the Shows You Can Watch https://www.geekgirlauthority.com/quibi-launches-april-6th-heres-a-complete-list-of-the-shows-you-can-watch/

What I Learned From the Women of #TheMagicians

Check out the trailer for #QuantumError - a first-person shooter with a cosmic horror theme. https://www.geekgirlauthority.com/quantum-error-cosmic-horror-trailer-released-by-teamkill-media/

Looking for a new #twitch stream to enjoy while stuck at home? I highly suggest tuning into @CupAhNoodle! She is the Queen of horror games 👑👑 https://twitter.com/GeekGirlAuth/status/1245792343095033857

We are in difficult times and we find ourselves turning to our favorite Twitch streamers to get us through. So we put together a list -- 6 of GGA’s Favorite Twitch Streamers to Watch Play Games https://www.geekgirlauthority.com/6-of-ggas-favorite-twitch-streamers-to-watch-play-games/