The Walled City is divided in to two big rounds. In each round there are four phases. The goal of the game is to have the most victory points (called “votes”) at the end of the second round. I would consider The Walled City to be a rich, Euro style area control game, with the tiniest hint of role selection and “take that” sprinkled in. Players take turns placing roads and walls on the board along with cards that dictate how many of their meeples they will place in the city or on its towers. The roads players place form the parameters of the areas that will be controlled during the game. The strategy is deep, but the mechanics are streamlined and the goals are focused. Plus, the rule book is one of the best I have ever seen. I love that there is really no “point salad” at the end of the game as in some Euro style games. I’ve played it several times and always feel satisfied afterwards. 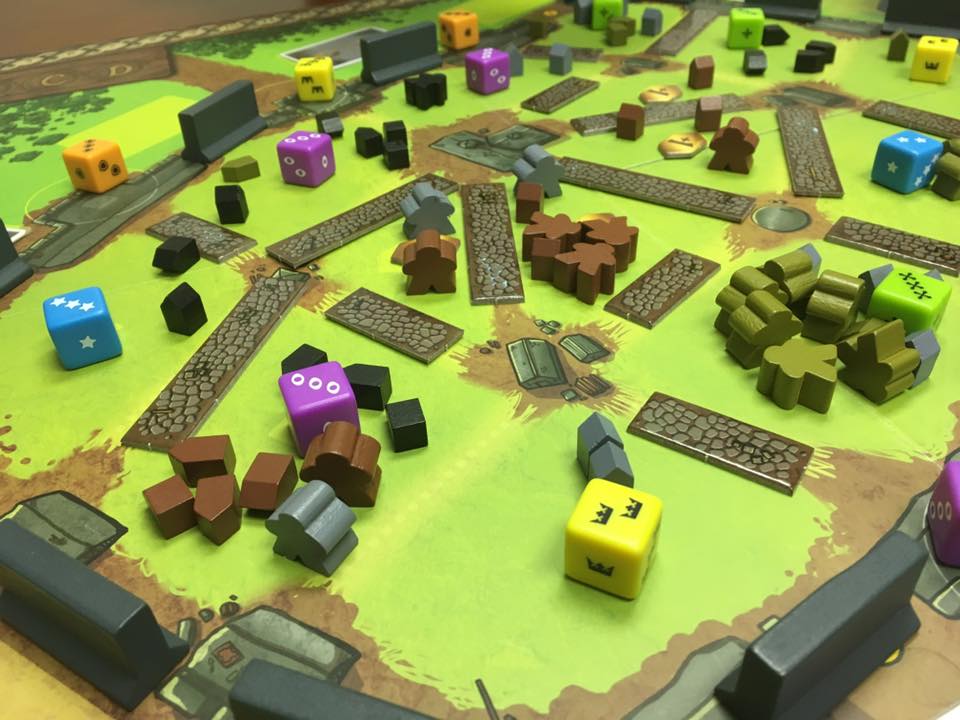 Royals sets the participants in 17th Century Europe. Everyone is trying to establish the greatest influence over the nobles of Britain, France, Germany, and Spain. The player who establishes the most influence at the end of 3 eras wins the game. That quickly sums up the theme of the game. Nobles + Influence = Victory. Collect cards from one of the 4 nations and use them to place your cube in a space occupied by a noble. There is only room for one cube per space, so the game gets ugly early. But its simple rules belies decent strategy and that makes it easy for me to find players. Win or lose, every play of Royals is a joy for me. 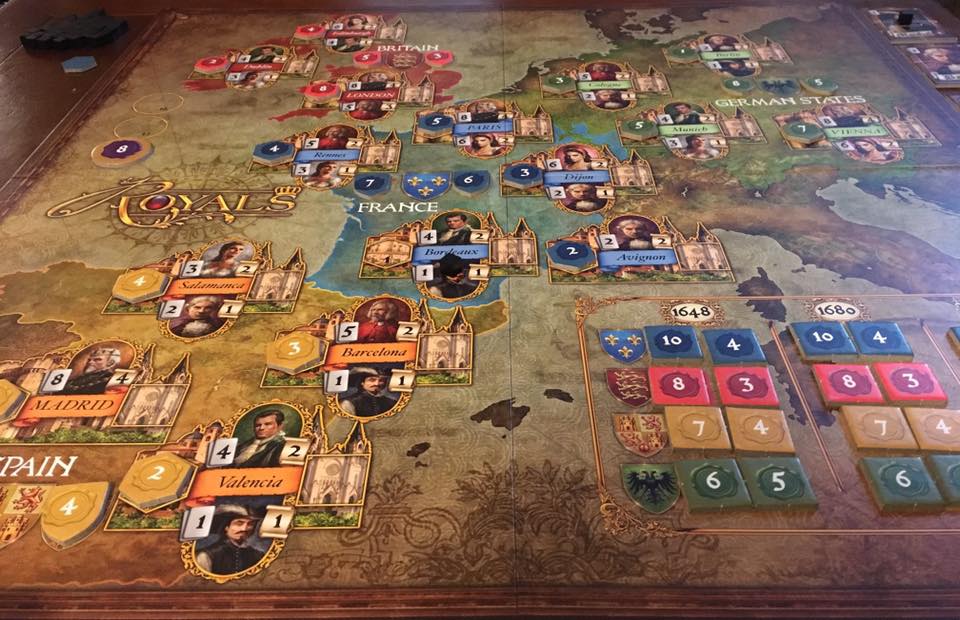 Clockwork Wars is a lovely and intense area control game. CW has a steampunk theme along with cool steampunk art. The area control aspect looks very simple on the surface. Players simultaneously write down where they will be placing their colored discs on the board each turn and then all players place their discs. Any spaces that contain multiple players’ units have to fight, which basically means if I have 3 and you have 2, then we each remove two of our units and I have one remaining on that space. But Clockwork Wars has a lot more going on than this would indicate. Players also vie for technologies, espionage, and board terrain to acquire strategic bonuses, so they can improve the chances of maximizing their own area control while hamstringing opponents. For me, this one is a no-brainer. I love games with streamlined mechanics that put a bunch of strategic options in players’ hands. Clockwork Wars is a hidden gem and if you like area control, you must check it out. 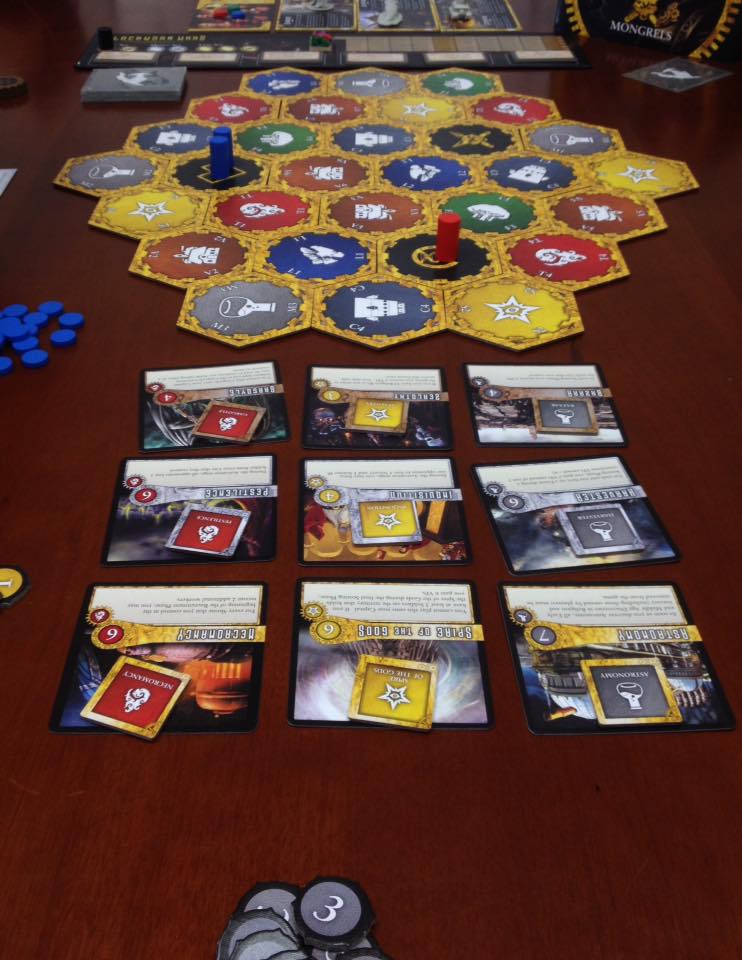 The king has died and players are trying to place and manipulate cubes on a map of Europe in order to influence which group (the Scots, Welsh, and Romano-British, or even the Saxons) will fill the power gap. Each player has the same types of cards in their respective hands. Once a card is used it is out of the game. There is zero luck involved and the strategic choices create a brain buzz that is certain to be good for you. (Disclaimer: I’m not a doctor or scientist). All I know is that The King Is Dead is super fun. As a bonus, the four player game is a 2 vs. 2 struggle in which players cannot really communicate with each other. It provides an excellent twist to an already excellent game. If you like area control and high strategy, The King is Dead is a must play. 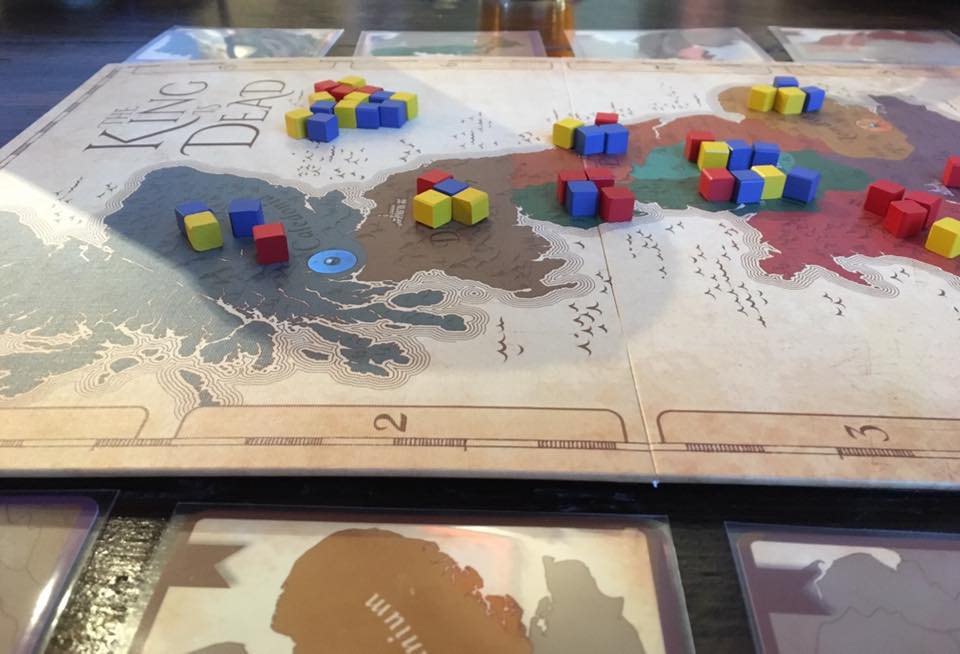 The newest addition to my area control list is Saga of the Northmen. Players use cards to place cubes into the seven major kingdoms of Europe and place gold into neutral territories on the map. After that, players maneuver the armies and fleets of the kingdoms they control into neutral territories to gain the gold located therein. The combination of luck (in drawing clan cards) combined with mitigation of the circumstances the board deals you makes for tense and exciting game play. The board and components are quite attractive as well. I’ve played it a couple of times now and it continues to grow on me.

What’s more fun than launching spaceships with your colorful astronauts in order to mine resources on Mars? If you like area control games, then the answer is not much. Mission Red Planet packs a lot of punch in 60 minutes. Players have identical hands of 9 cards, with each card having a unique action. Each round they choose one secretly and play it when its number is called the card is revealed and the action is executed. The result of these actions is that by games end, the areas of Mars are filled with little plastic astronauts. Controlling areas on the map provides players with victory points from acquiring resources and fulfilling secret missions resulting from area control. Mission Red Planet is a tightly designed game and one that every area control fan should own.

Well, that’s my list. For now. What games are on yours?