DISCLAIMER: The following recap is riddled with spoilers as much as Wynonna is probably riddled with doughnuts. Proceed at your own risk, and make your peace.

Welcome back, Earpers! Wynonna Earp returned to us last night with a bang and a belly bump! Wynonna is handling her newfound pregnancy the only way she knows how – with a plethora of doughnuts and demon slaying. We were given some lovely WayHaught moments, and a beautiful Earp sisters moment. Wynonna eventually told Doc of her bun in the oven, and while his initial reaction was one of shock, he later warmed to the idea. Wynonna and Dolls also shared a kiss, and I’m once again fully invested in this love triangle Wynonna Earp has forged for us. Shall we dive into “Whiskey Lullaby?” 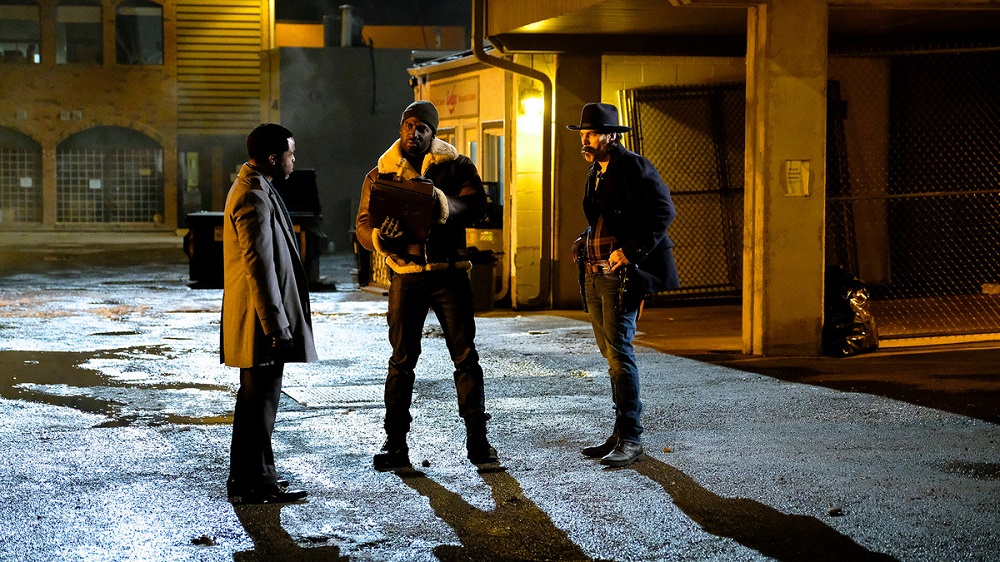 We open with Dolls (Shamier Anderson), Doc (Tim Rozon) and Moody (Kevin Hanchard) amidst a standoff. Moody tells our boys that Black Badge has simply deserted the Ghost River Triangle, since they see it as a lost cause. However, Moody throws them a bone and hands our duo a folder containing pertinent information regarding their missions. Aw, how nice of him to lend a helping hand.

Meanwhile, a priest (Stuart Bentley) stumbles upon a woman shrouded in black in his sanctuary. He informs her she can’t be there. Our woman in black promptly ignores him and proceeds to eat him. Yes, eat him. We see that the woman is Mercedes Gardner (Dani Kind).

Later, we’re at the Homestead with our Earp sisters. Waverly (Dominique Provost-Chalkley) is gently reminding Wynonna (Melanie Scrofano) that she can’t ignore the newfound life forming inside her. Plus, she must tell Doc of it at some point. Wynonna brushes it off as only Wynonna can, and the pair heads to the police station.

Then, Dolls informs the gang that while Black Badge has left them to their own devices, that simply means they have free reign over their work. They can call the shots without the blood pact affecting them or anyone closely supervising them. Total freedom! Aw, Dolls, taking a negative and turning it into a positive. How very “glass half full” of you. Meanwhile, Dolls asks Wynonna out for a coffee date. Well, Wynonna can only have tea at the moment. Waverly has a frank discussion regarding her sister’s next move – it’s only fair that she tell Dolls about her pregnancy, and of course Doc as well.

Suddenly, a nun (Meg Farhall) strolls into the precinct with blood-stained hands. The Earp sisters and Nicole (Katherine Barrell) listen to her intently as she recalls how she found her priest half eaten in the sanctuary of her church. What a way to go. Waverly vows to help the poor woman. Wynonna is merely excited to have a case to distract her from her current situation. 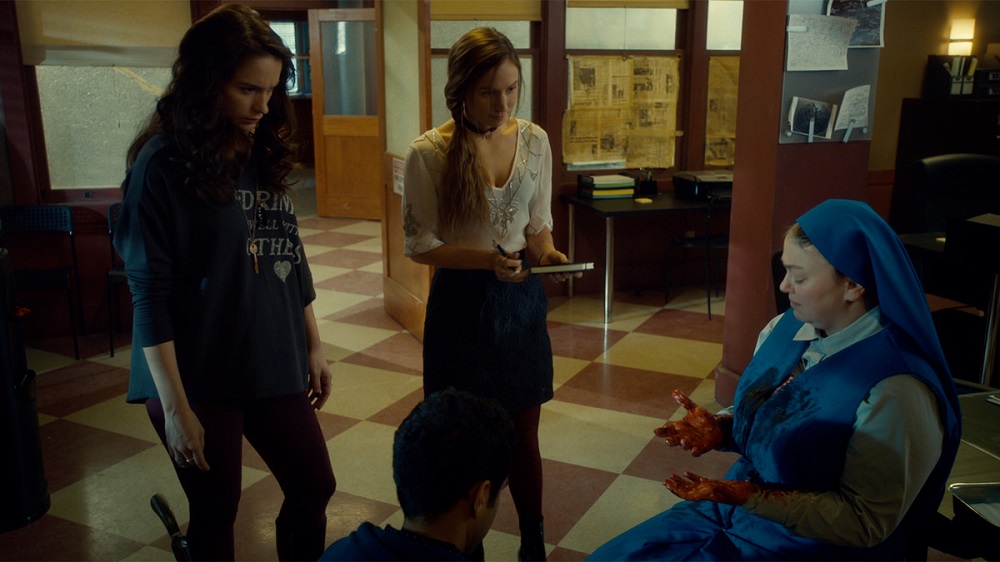 Later, we see Wynonna and Dolls are on their coffee date. Wynonna is trying to figure out how to avoid bringing up the pregnancy issue. Meanwhile, precious Dolls is attempting to confess his true feelings for her, and take their friendship to the next level. While the coffee date is happening, we are blessed with a lovely little Waverly and Nicole sexy fun times scene, where the former convinces the latter that everything they did while Waverly was possessed was still real. Wynonna excuses herself to the ladies’ room, but unfortunately falls into a deep sleep before making it there in time.

Then, Wynonna wakes up from said deep slumber and notices that everyone is asleep. She then notices that her baby bump is significantly larger. Wynonna frantically wakes up Dolls and they begin exploring their surroundings. They observe that everyone in Purgatory is asleep. Time to wake up the Scooby gang and put them on the case! 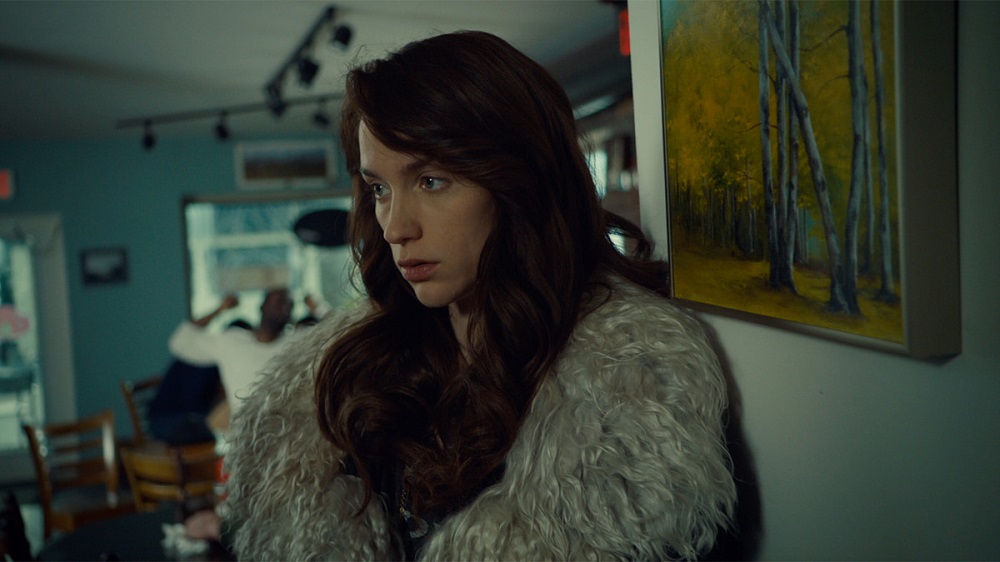 Meanwhile, we see that Tucker (Caleb Ellsworth-Clark) is up to no good. He’s holding Hypnos (Andrea Apergis) and his daughter Poppy (Kiana Madeira) hostage. Hypnos is responsible for putting the whole town to sleep, as per the wishes of the Gardner siblings. Meanwhile, we discovered, via Mercedes and Beth (Meghan Heffern), that said Gardner siblings are attempting to locate the second seal in Purgatory. In order for their search to yield any progress they had to put the whole town to sleep. Back at Hypnos’s residence, Tucker takes Poppy for his own, to do with as he pleases. He’s so creepy.

Later, Dolls and Wynonna wake up Waverly and Nicole. Dolls stumbles upon Nicole in the bathroom, and notices she fell asleep post coitus. Awkward. Our quartet decides to stock up on energy drinks to stay awake. Waverly heads to Shorty’s to wake up Doc, while Wynonna, Dolls and Nicole attempt to find the source of the sleeping spell.

At Shorty’s, Waverly finds Doc asleep, entangled with Rosita (Tamara Duarte). After he wakes up, Doc reminds Waverly that he doesn’t do attachments. He has his fun when and where he pleases. They go to the basement and discover that Jeremy (Varun Saranga) is asleep there. Once he wakes, he informs the gang that the second seal is in this very room.

Meanwhile, Wynonna, Dolls and Nicole are given a lead that takes them to Hypnos. The spell caster informs them that if the town isn’t roused from their slumber soon they will all die, including those they are awake. He was forced to cast the spell by the woman in black (Mercedes). Wynonna recalls seeing this woman and initially thinking she was Willa. Hypnos also reveals that Tucker took his daughter, and Nicole sets out to locate them. 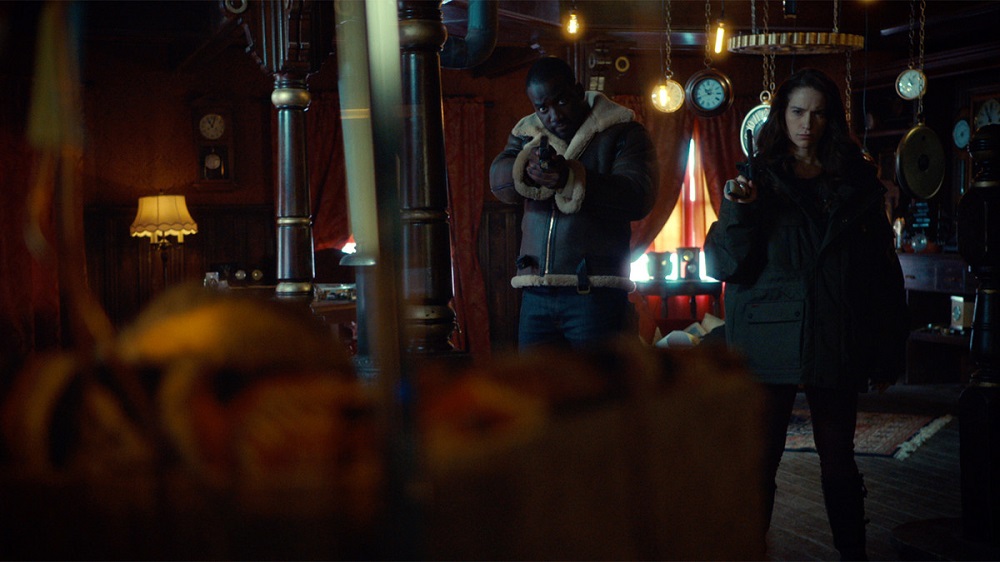 Taking out baddies since 2016.

Then, back at the precinct, Wynonna has an encounter with the woman in black, but she’s not alone. A second shrouded figure also joins them. Double, double, toil and trouble, indeed. Dolls finds Wynonna on the floor, and it’s then that he notices her protruding belly. Uh oh.

Meanwhile, we see Tucker give Poppy a cheerleader uniform to wear, one that happens to be Waverly’s. He basically wants this poor girl to imitate a woman he can’t have. Thankfully, Nicole shows up in time to stop the little brat. She shoots and hits Tucker, then returns Poppy to Hypnos.

Back at Shorty’s, Waverly, Doc and Jeremy are frozen by the Gardner sisters as they locate the seal. Not so fast, ladies! Wynonna arrives just in time to give them a taste of Peacemaker. She shoots both women in black and they immediately flee the scene. This unfreezes our trio in the basement and thankfully wakes up the whole of Purgatory. Then, Wynonna flaunts her bump to Doc. He reacts unexpectedly, by not saying anything at all. Scrofano and Rozon’s chemistry is off the charts, and their scenes are always so well done.

Later, we see the Gardner sisters regrouping. While Peacemaker didn’t kill them, it certainly left a nasty mark. Now they must continue their quest to break that second seal without being thwarted by Wynonna and co. They receive a surprise on their doorstep – the head of the Stone Witch, Constance Clootie. Well, that’s certainly interesting. 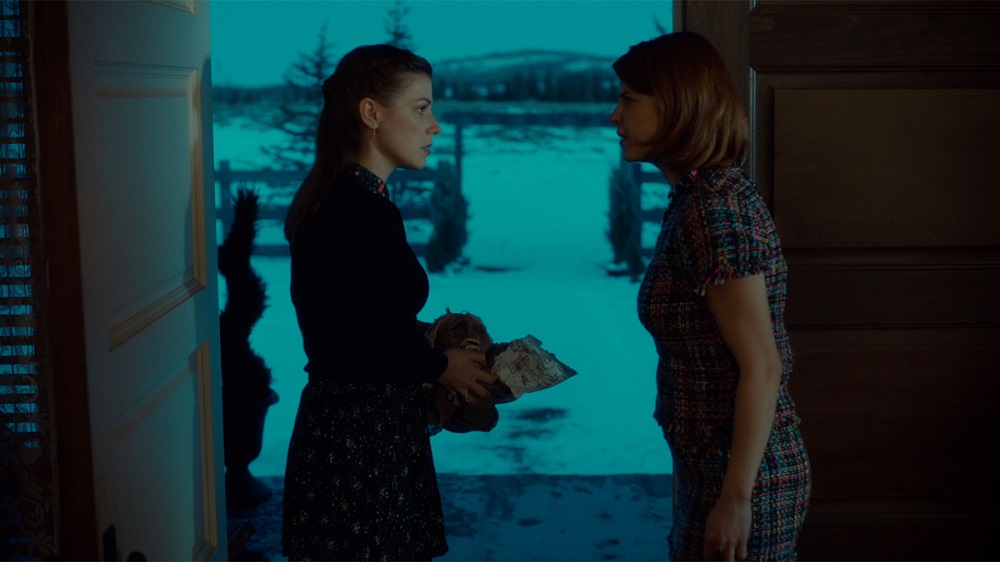 Back at the precinct, Jeremy reveals to our Scooby gang that he knew Wynonna was pregnant all along. Of course he would. Doc hands Waverly a note to give to Wynonna.

Later, at the Homestead, Wynonna breaks down and sobs in Waverly’s arms. Waverly vows to be there for her sister, regardless of what happens. Wynonna Earp is adept at granting us some wonderful sisterly love scenes. Then, Waverly hands Wynonna the note Doc wrote her. It simply says “I’m all in.” Yes, Doc! Way to step up.

This episode was all about Melanie Scrofano. That woman knows how to pull at my heart strings. Her scenes with Waverly and Doc were the standouts of not only this episode, but all of Wynonna Earp thus far. While I enjoyed the smooch with Dolls, Doc’s declaration of devotion to Wynonna and baby took the cake for me. While I’m 90% sure the baby is Doc’s we still don’t know for sure, and it’s rare in television to see a man in that capacity supporting an unmarried woman. Also, pregnant Wynonna might be better than demon Wynonna. So many doughnuts, and a new affinity for tea. I’m excited to see what the future holds in store for our Bacon Doughnut (and Angel Pants, for that matter).

Do you think Doc is the father? Will this newfound discovery spell out hope for Wynonna and Doc, or push “WynDolls” forward? How long before the Gardner sisters attempt to break the second seal again? Will we find a nice boy for Jeremy? So many questions, so little time. Join me next week for another romp through the Ghost River Triangle!

Wynonna Earp airs Fridays at 10pm on your SyFy affiliate.