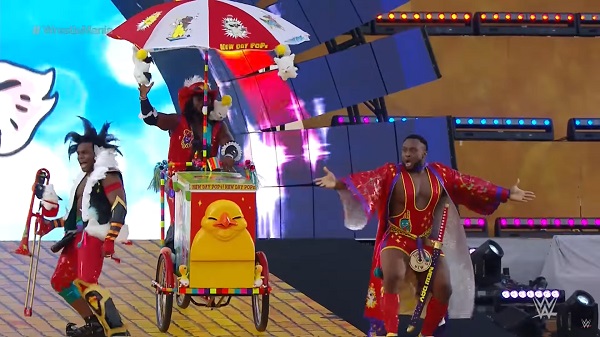 This weekend was WrestleMania 33 at the Citrus Bowl in Orlando, Florida and wrestling fans all over the world were treated to some amazing matches, happy beginnings, epic returns, and sad goodbyes.

To kick things off, WWE Superstars and WrestleMania 33 hosts, Big E, Kofi Kingston, and Xavier Woods (members of the tag team trio “The New Day”) made a fantastic Final Fantasy XIV themed entrance. In a partnership between WWE and Square Enix, each wrestler dressed up as character from the popular MMORPG. Big E was dressed as the Samurai, Xavier Woods as the Monk, and Kofi Kingston as the Red Mage. Kofi rode in on a “POP-cycle” adorned with images and plushies of fan-favorites Chocobos and Moogles.

Did everyone enjoy party with us at #Bootymania last night?

WWE worked in collaboration with Square Enix to produce the entrance. It is the first time that WWE has worked with a game studio to promote a game and have that game be a part of such a massive event like WrestleMania.

You can watch the entrance below and there will be more behind-the-scenes content available in the coming months.

Personally, I feel like the entrance could have used the Final Fantasy theme, more chocobos, and more moogles, but I’m biased. Kupo!