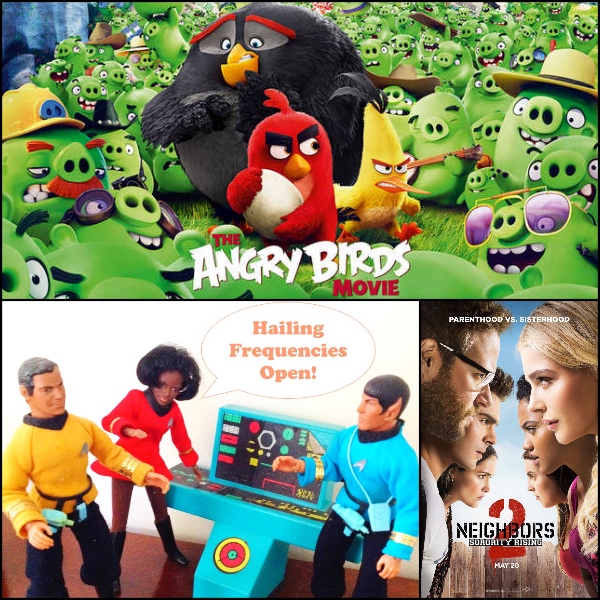 Superheroes were beaten by a bunch of birds and pigs as THE ANGRY BIRDS MOVIE opened at #1 with an estimated $39 mil. Although it’s something to crow about for a week, that number doesn’t bode well for an out-of-the-gate hit. A comparison might be drawn with several recent animated films that might give an indication of its domestic tally. RANGO opened in March of 2011 with $38 mil and went on to gross $123.4 mil. THE PEANUTS MOVIE opened November of last year with $44.2 mil and grossed $130.1 mil. THE CROODS opened with $43.6 mil in March of 2013 and ended its run with $187.1 mil. The bloom might have faded a bit on the rose, as BIRDS will probably end up in the neighborhood of $125-130 mil. Stiff competition awaits in the form of TMNT: OUT OF THE SHADOWS in two weeks and FINDING DORY in a month.

CAPTAIN AMERICA: CIVIL WAR crossed the $1 billion line this weekend, falling slightly more than was expected although a still respectable $33.1 mil domestic in its third weekend. It has now topped BATMAN VS SUPERMAN’s domestic tally and is within $15 mil of overtaking DEADPOOL’s $362.7 mil domestic as the #1 film in its genre at the midway point of 2016. For point of comparison, AVENGERS: AGE OF ULTRON had earned $372 mil domestic by its third weekend and took just 24 days of international release to cross $1 billion. CIVIL WAR has been open 17 days domestic, 24 days total including international, which means they are currently neck-and-neck in this Marvel v Marvel race.

NEIGHBORS 2: SORORITY RISING did OK business with a $21.7 mil opening, good enough for third, but that number is $28 mil less than the original NEIGHBORS opened with in May of 2014. This sequel won’t come anywhere near the $150 mil domestic/$270.6 mil worldwide of its predecessor.

The well-reviewed THE NICE GUYS (90% Certified Fresh on Rotten Tomatoes) met expectations with $11 mil and a #4 opening. People are saying that this is a breath of fresh air in a summer season normally full of superheroes, sequels and animated fare. Word of mouth may help keep this in theatres longer than expected, but its top end will probably be in the $45- $50 mil domestic range.

As for the rest, Disney continues to dominate as both THE JUNGLE BOOK and ZOOTOPIA loose the least week-to-week audience of any film in the top ten. The latter is within $19 mil of becoming Disney’s second film in 2016 to top $1 billion worldwide. Last week’s new releases didn’t fare too well in their second week as both MONEY MONSTER and THE DARKNESS lost 52% of their audience. Finally, amid middling-to-poor reviews, KEANU tumbled to #15 after dropping over 1,400 screens. The $15 mil comedy has grossed just $20 mil after a month in release.

Up Next: Two sequels vying for the #1 spot. ALICE THROUGH THE LOOKING GLASS hopes to match or exceed the $116.1 mil domestic opening of its predecessor, a film that went on to gross $1 billion in 2010. X-MEN: APOCALYPSE continues with the X-MEN: FIRST CLASS cast and hopes to build on the $90.8 mil domestic opening of 2014’s X-MEN: DAYS OF FUTURE PAST, a film that ultimately grossed $747.8 mil worldwide.