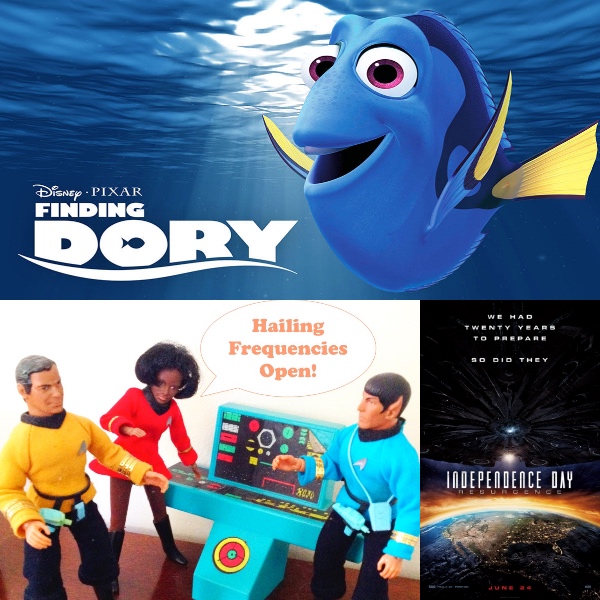 Four films opened wide this weekend. None of them could top an animated fish searching for her family. FINDING DORY continued its record-shattering run by grabbing $73.2 mil. To date the film has earned $286.5 mil domestic in just ten days. To say it’s found an audience would be an understatement. TOY STORY 3 (2010) is the only Pixar film to cross $1 billion in worldwide receipts and FINDING DORY currently leads it by $60 mil over the same frame (source: http://www.the-numbers.com/movies/production-company/Pixar). DORY will obviously need international help to get there, where it’s only earned $110.3 mil., but it’s a smash hit any way you slice it.

It’s a mixed bag for the newcomers. INDEPENDENCE DAY: RESURGENCE grossed $41.6 mil, which put it at #2. That’s a poor showing for a film that cost $165 mil to produce (plus $80-100 mil to market). Reviewers and audiences alike are skewering the film. It’s currently got a 33% rotten rating and 4.3 out of 10 on Rotten Tomatoes. As the old saying goes, you can’t go home again and ID:R has proved that in spades. To put it in perspective, the original ID4 opened two decades ago with $50.2 mil on nearly 1,200 fewer screens…and that number isn’t adjusted for inflation. Not good.

On the flip side, THE SHALLOWS opened extremely well. With a slim budget of just $17 mil and very little in the way of traditional marketing, it pulled in $16.7 mil. That’s a fantastic number for what appears to be a new horror franchise. Horror films in general are doing quite well this summer. THE CONJURING 2 fell just 48% week-to-week and has thus far grossed nearly $87 mil against a $40 mil budget.

THE FREE STATE OF JONES connected with virtually no one. The $50 mil period action drama grossed a slim $7.7 mil and has people like me wondering if it wouldn’t have fared better as a fall film meant for Oscar consideration rather than a mid-summer entry.

As far as the rest, CENTRAL INTELLIGENCE is doing exceptional business. After ten days in release, it’s earned $69.3 mil and has obviously built on positive word of mouth. X-MEN: APOCALYPSE crossed $150 mil domestic, which is $66 mil behind X-MEN: DAYS OF FUTURE PAST (2014) over the same frame ($216.7 mil after five weeks). After two months in release, CAPTAIN AMERICA: CIVIL WAR finally fell out of the top ten. To date, Marvel’s smash hit has grossed $1.1 billion worldwide. Finally, WARCRAFT continues its epic slide. It has lost 70% or more of its audience each of the two weeks it’s been in release and has earned just $43.8 mil domestic against a $160 mil budget. International monies are the only upside in this story, as WARCRAFT has earned $368.3 mil overseas with the bulk of that box office coming from China.

Up Next: Three new films vie for America’s 4th of July holiday money. A return to the jungle with THE LEGEND OF TARZAN starring Alexander Skarsgard, Djimon Hounsou, Samuel L. Jackson and Christoph Waltz. The newest Spielberg fantasy, THE BFG starring Bill Hader. Finally, THE PURGE: ELECTION YEAR the third film in the horror/thriller franchise.