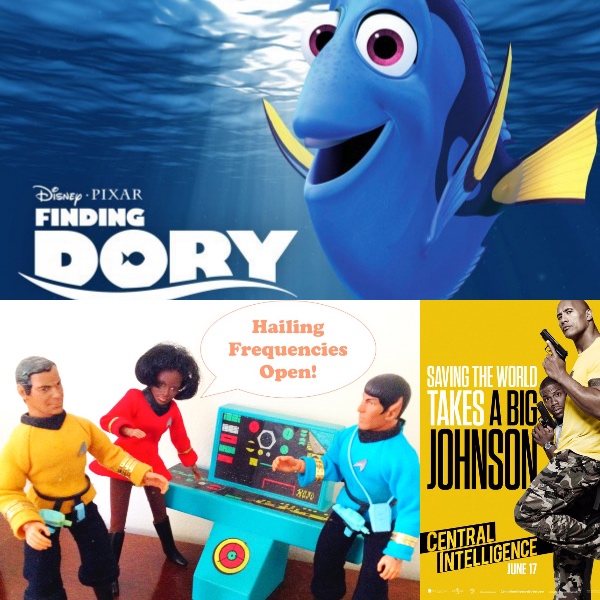 Disney continues its hot streak as it breaks records along the way to its domination in 2016. FINDING DORY raked in a massive $136.1 mil, the biggest opening for an animated film ever. It bested SHREK THE THIRD (2007) $121.6 mil opening by nearly $15 mil. FINDING DORY also shattered the single day record for an animated film as it scored $54.9 mil on Friday alone. Prognosticators had predicted going in that DORY would easily top $100 mil, but I don’t think anyone expected the amount of goodwill that FINDING NEMO obviously enjoys…until they saw Friday’s numbers.

There are a couple of takeaways from DORY’s massive opening. One, Disney can do no wrong in 2016. Their only miss (and it’s a huge one) is ALICE THROUGH THE LOOKING GLASS. Budgeted at $170 mil, the film hasn’t even broke $70 mil after four weeks in domestic release. It’s also a flop on the international front having earned just $166.7 mil. For point of comparison, ALICE IN WONDERLAND (2010) had grossed $293.5 mil domestic alone after a month. That blip on the radar aside, Disney is the studio to beat this year and, quite frankly, I don’t think anyone is going to be able to top them. On the downside, DORY’s record breaking opening weekend only solidifies Disney’s decision to make sequels to many of Pixar’s biggest hits. Where Pixar was once known for having only a single sequel under its belt (1999’s TOY STORY 2), after Disney fully acquired them a decade ago they’ve aggressively pushed out sequels: TOY STORY 3 (2010) $1 billion worldwide, CARS 2 (2011) $559.8 mil worldwide, MONSTERS UNIVERSITY (2013) $743.5 mil worldwide FINDING DORY (2016) and the upcoming CARS 3 (2017) TOY STORY 4 (2018) and THE INCREDIBLES 2 (2019). Although many say those sequels are an exercise in diminishing returns, they’ve proved to be winners with audiences who will follow the Pixar brand anywhere.

The other new release, CENTRAL INTELLIGENCE, opened with $34.5 mil. That is right in line with an average Kevin Hart film. RIDE ALONG (2014) is the biggest hit that he’s helmed and that opened with $41.5 mil. Hart’s last two films, GET HARD (2015) and RIDE ALONG 2 (2016) opened with $33.8 and $35.2 mil respectively before they went on to gross $90 mil apiece. CI should do at least that much business and I wouldn’t be surprised to see it top $100 mil or more considering its A- CinemaScore.

Last week’s new releases did not fare well. WARCRAFT plummeted, losing 73% of its week-to-week audience and earning just $6.5 mil. THE CONJURING 2 lost 61% of its audience, but that’s not unexpected in the horror genre. It’s now grossed $71.7 mil, which is $12.2 mil off the pace of the original after two weeks. NOW YOU SEE ME 2 has earned $41.3 mil and is trailing its predecessor by nearly $20 mil over the same period.

Up Next: A very crowded slate of four films vie for the audience’s dollar. The sequel 20 years in the making, INDEPENDENCE DAY: RESURGENCE, the action period drama FREE STATE OF JONES starring Matthew McConaughey, and not one but two horror films: THE NEON DEMON starring Elle Fanning, Christina Hendricks and Keanu Reeves and THE SHALLOWS starring Blake Lively.

Here, as always, are the weekend domestic estimates courtesy of our friends at BOX OFFICE MOJO: