Watch the Epic Trailer for WAR FOR PLANET OF THE APES

The trailer for War For The Planet Of The Apes has been released by 20th Century Fox, this morning, and it is epic. Truly a war movie, it is dark and sad, and thought provoking.

I have been a fan of the original movies since I was a kid. I’ve seen them all, I’ve dressed up as Nova for halloween, I met the original actress at a Doctor Who convention and got my first taste of the people you admire aren’t alway the people you admire. My point being that I am a huge fan. When Tim Burton announced that he would be directing the Planet of the Apes, 2001 version, I was excited. Hold your horses, I haven’t finished. Up until that point aesthetically speaking, his style really spoke to me. Then Mark Wahlberg got attached and it all went downhill. It was a disappointing movie to say the least.

Cut to ten years later and Rise Of The Planet Of The Apes is released. At first, I was super judgmental about it. I have my favorite movies and if they’re remade, I generally won’t even bother. But this movie was different. It was really good. Part of the appeal for the original movie is the makeup and affects. In it’s time, it was new and exciting and the same can be said for the latest installment of the franchise. The affects are stellar, we don’t have to rely on using living, breathing animals any more because the technology is so amazing that the apes are incredibly life like. Moving and breathing, every hair on their body looks real and textured.

Then you have the heartfelt performances by the stunning actors behind that apes. Leading the pack, the incredible Andy Serkis, who needs an oscar right away. A Motion Capture performance should be respected. The demands of creating a relatable character while having to transform physically is nothing to scoff at. All the actors are wonderful, but I have a soft spot for Maurice the Orangutan, played by Vancouver actress/dancer Karin Konoval. I love every part of her nurturing portrayal, and I just love orangutans.

Take a look at some the brand new images released today: 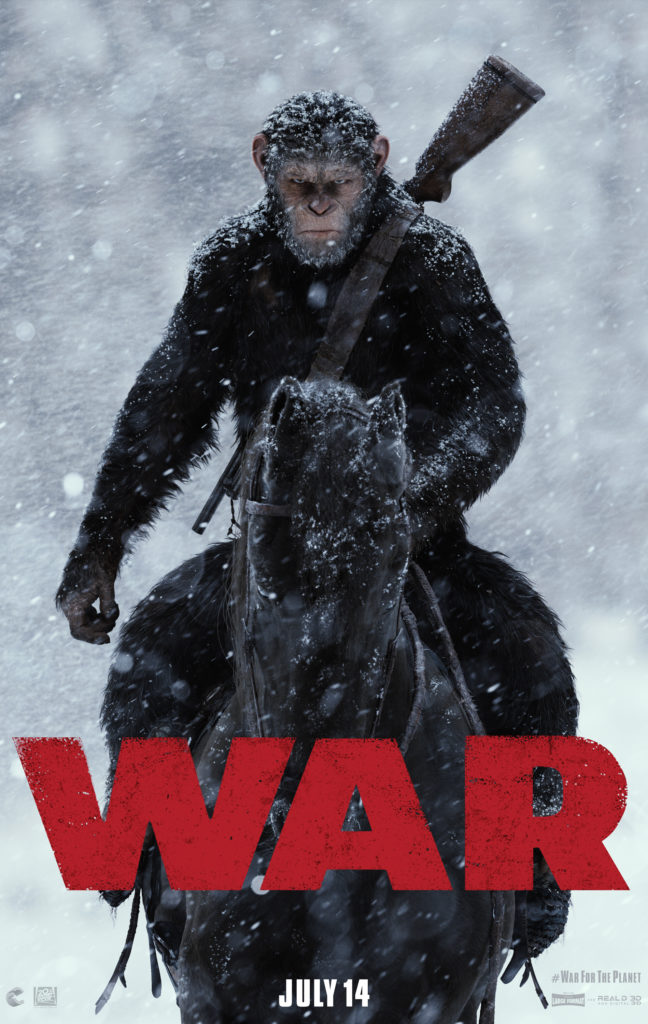 In War for the Planet of the Apes, the third chapter of the critically acclaimed blockbuster franchise, Caesar and his apes are forced into a deadly conflict with an army of humans led by a ruthless Colonel. After the apes suffer unimaginable losses, Caesar wrestles with his darker instincts and begins this own mythic quest to avenge his kind. As the journey finally brings them face to face, Caesar and the Colonel are pitted against each other in an epic battle that will determine the fate of both their species and the future of the planet.

Check out the trailer: