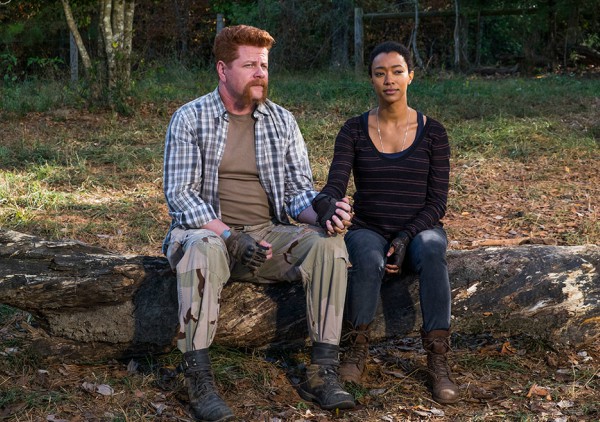 The Walking Dead Season 7 ended with a bang. Negan and Rick go head to head, but the real MVP was the most unexpected surprise.

Previously, Sasha reluctantly made a deal to join Negan and the Saviors. She also asked Eugene to help her commit suicide.  Eugene is 100% Negan.  He believes that Negan is keeping him safe.

King Ezekiel made the decision to join Rick after the Saviors killed Benjamin.  Morgan was so upset by Benjamin’s death that he decided to kill all of the Saviors.  And Carol finally came out of hiding when she heard what the Saviors did to Glenn and Abraham.

Rick found the guns he needed to take on the Saviors but failed to get anyone from Oceanside to join him.  He already established an alliance with Hilltop and the Scavengers.  Now the time has come to prepare for war.  But first!  Rick and the gang have to deal with Dwight.

Sasha is in a dark place listening to music. She is trying really hard to stay conscious.  She closes her eyes and the earbuds fall out.

In flashbacks we get to see the last conversation between Abraham and Sasha. It was the day that Rick took Maggie to Hilltop.  The same day that Negan killed Abraham and Glenn. Sasha tells him not to go. She had a dream that he died.  It scared her enough to beg him to stay in Alexandria.

Negan takes food to Sasha.  It’s their big day. The day that Sasha helps Negan set things straight with Rick.  She asks him what she needs to do. 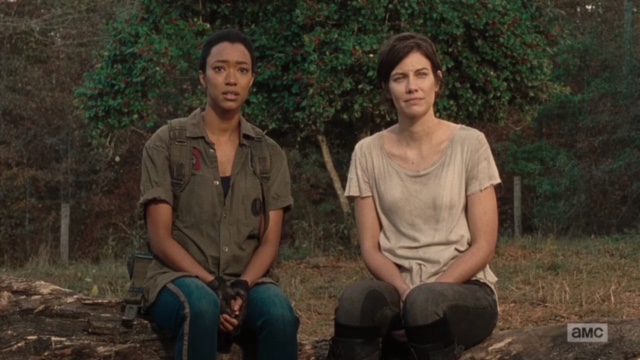 Sasha and Maggie are sitting in a field together looking at the sun.

The group confronts Dwight. He says he will help them because he wants Negan dead.  Tara reminds him that he killed Denise, her girlfriend.  Dwight says he wasn’t aiming for Denise. Daryl rushes at him and holds a knife to his head.  Dwight apologizes to Daryl.  He says they are both there because of Sherry.  Dwight says they can work together to stop Negan.

Rosita tells them that the Saviors have Sasha.  Jesus says that Dwight could be their only chance to get Sasha back. Rosita says she doesn’t trust Dwight, but she does trust Daryl’s judgement.

Dwight already has a plan.  He tells them that Negan is coming with three trucks.  He will slow them down by cutting trees down to block their path.  When they get to Alexandria, Rick can attack. Then Dwight will radio the Sanctuary that everything is okay.  They will pack up and attack the Sanctuary and then the outposts. 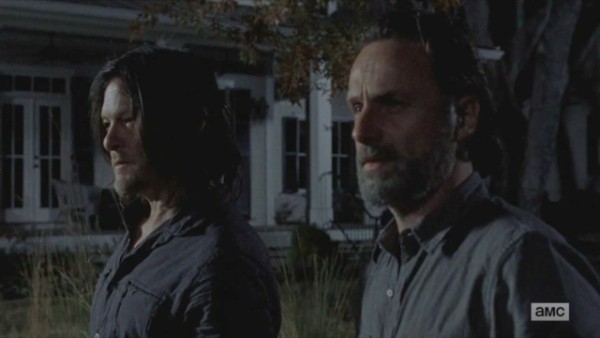 Rick and Daryl let Dwight go back to the Sanctuary. Daryl vows to kill Dwight.

Sasha isn’t very excited about Negan’s plan.  He’s disappointed that she started crying.  She insists that no one has to die.  Negan tells her that she’s wrong.  He plans on killing three people.  She talks him down to one.

Maggie talks to Jesus and Enid about where the group stands.She knows that Gregory is gone.  Gregory could be with Negan telling him everything.  Jesus says he’s glad that Maggie is the one making the tough decision.  Judith is at Hilltop. Enid takes her away.   She gives Maggie Glenn’s watch before she leaves. 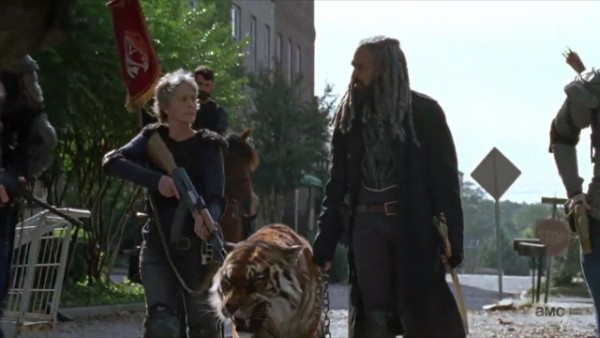 Carol has on armor as she leads King Ezekiel and his men out of the Kingdom. They encounter Morgan, who is wearing Benjamin’s armor.  Morgan says he will hunt down the Saviors alone. She tells him that if he kills any of them, the kingdom loses their advantage.  Ezekiel talks Morgan into joining their regiment instead.

Jadis and the Scavengers arrive in garbage trucks. They help set up the explosives and are stationed next to Rick’s people along the wall.

The Saviors hit the roadblock that Dwight set up.  Eugene asks Negan if he can approach Rick first to try and diffuse the situation.

Eugene tells Sasha that he’s glad that she had a change of heart about her ‘allergy medicine.’  He assures her that she will get used to life at the Sanctuary.  She tells him “not like you.”

The Saviors arrive at Alexandria.  Eugene has the bullhorn.  He asks Rick if he will comply with Negan.  Rick asks Eugene where Negan is. Eugene replies, “I am Negan.”

Rick hesitates, takes in the scene…he’s got his people and the Scavengers next to him.  He signals to Rosita to set off the explosives.  Nothing happens. 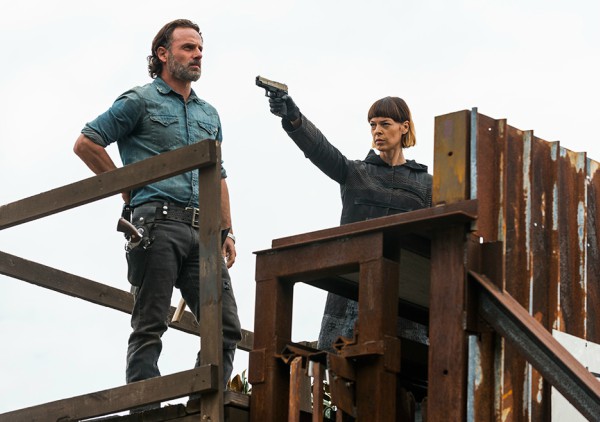 The Scavengers stand up and point their guns at the Alexandrians.  BETRAYED!

Negan steps forward.  He tells Rick that he knew he was up to something.  Did Rick really think he could pull one over on them?

Michonne has a shot on Negan and Eugene, but one of the Scavengers stops her.

Rick says to Jadis that they had a deal. She says the Saviors offered her a better deal.

Rick wants to see Sasha first. Negan is amused and talks to Sasha through the casket.

Abraham reminds Sasha that they put their lives on the line for their family.  He says they both know if they are going to die, it better be for a good reason.  Maggie is carrying the future. And she will feel guilty for not helping her.  Sasha agrees and they leave for Hilltop.

The Saviors are mobilizing for Alexandria.  Eugene gives Sasha an iPod for the trip.  She will ride in the coffin all the way to Alexandria. She asks Negan for a bottle of water.  Once inside the coffin, she turns on the music.  She looks at the poison pill that Eugene gave to her.  She takes the pill and waits.

Negan opens the coffin and Sasha is a walker. She lunges at Negan, knocking him off the trailer. 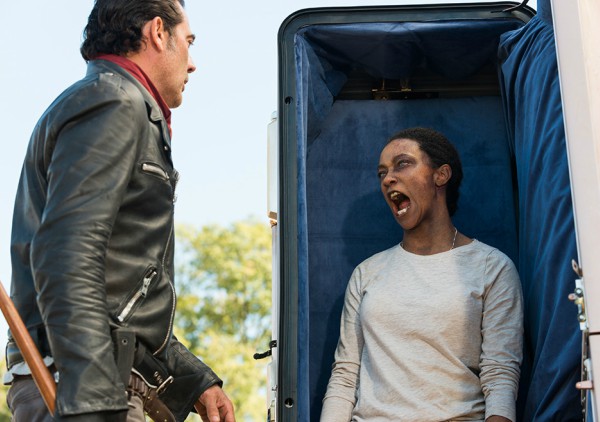 The Alexandrians start shooting the Scavengers.  Everyone start firing.

Michonne fights the Scavenger on the balcony.  The Scavenger is tough.  She’s besting Michonne’s every move.

Rosita is shot and Tara whisks her away to safety.

One of the Saviors pulls Sasha off of Negan before she can bite him.  Sasha tears into him.  Simon gets Negan to safety.

Jadis is holding a gun at Rick.  He tries to make another deal with her.  She shoots him and takes him to Negan.

Rick sees a lot of the Alexandria people dead on the streets.  There’s still a lot of gunfire going on.  When he gets to Negan, he sees Carl kneeling in front of the Saviors and Scavengers.

Jadis’ deal with Negan was that they take twelve people.  Negan says ten.

Rick kneels next to Carl. They see a body fall from the balcony where Michonne was. 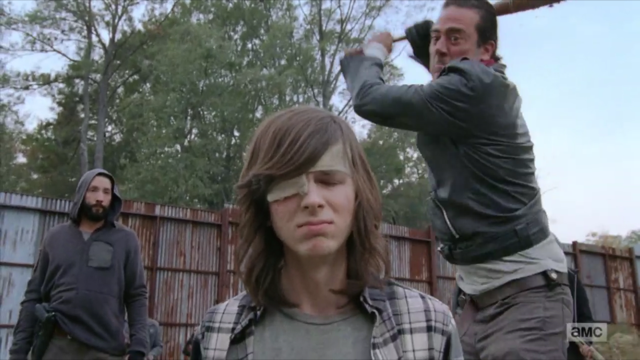 Negan tells Rick that he is going to kill Carl.  He will kill him quickly because he likes Carl. Then he is going to cut off Rick’s hands.  This is all Rick’s fault for not being on board with Negan

Negan pulls Lucille back, ready to bash Carl in the head.  Just before he swings, Shiva jumps at one of the Saviors.

The Kingdom has arrived, led by Carol.  Hilltop shows up too, led by Maggie.

Negan is shocked by the tiger.  He also makes note that Maggie is alive. 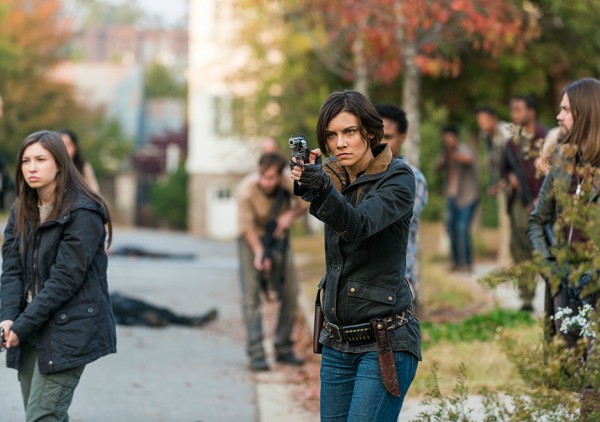 A gun fight breaks out.  Rick and Carl rejoin the fight.

The Scavengers set off smoke bombs and escape Alexandria.  Negan and the Saviors escape in a truck.

Rick and Carl find the scavenger’s body from the balcony fall and rush to find Michonne. They find her badly beaten, but alive.

At the Sanctuary, Dwight and Simon tell Negan that preparations for Plan B are underway.  Negan looks at Eugene and asks how Sasha died in the casket.  Eugene surmises that she ran out of air. Negan accepts Eugene’s explanation, but he is suspicious.

Negan looks out at the Sanctuary courtyard and tells all of his people…they are going to war.

The three communities band together to clean up and help the wounded. Daryl finds a wooden figure at the gate.  One of the soldiers that Dwight makes.  On the back, Dwight has written, “Didn’t Know.”

Tara sits next to Rosita. Rick sits with Michonne.

Maggie and Sasha sit together and watch the sun set.  They look at each other and smile.

Rick, Maggie and Ezekiel address the united communities: Alexandria, Hilltop, and The Kingdom. 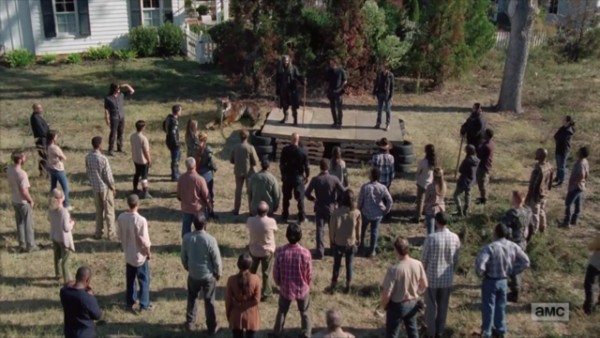 I can’t even…I have no idea where to begin.

Abraham! It was so good to see Michael Cutlitz on TWD again.  He’s one of my personal favorites.  No one lives up to his one liners.  He also appeared on Talking Dead and I literally cried when he showed up.  As I’m sure a lot of people did…according to Twitter.

Dwight…He’s done so much to Daryl. There’s no way Daryl will ever forgive him.  And now he looks like a liar.

Sasha.  I knew she would die. She said her goodbyes two episodes ago.  I was surprised by how she died. I can’t decide if it was courageous or not.  On one hand, she knew Negan would open the casket.  She knew she would turn and have an opportunity to kill Negan.  Which is exactly what happened.  On the other hand, Negan broke her. She thought it was the only way.  There’s always another way. RIP Sasha.

Scariest moment – Rick and Carl on their knees in front of Negan again.

Funniest moment – When Jadis told Michonne that she would “lay” with Rick. hahahaha!

Speaking of the Scavengers…I knew they were sketchy!  They’re so weird. I didn’t trust them from the start. And I was right!  Even if they had defeated Negan this time, I was sure that the Scavengers still would have turned on Alexandria and took everything they had.

King Ezekiel made me want to take up arms and jump in the TV to fight!  Hahaha! I felt like a hobbit at the Black Gates of Mordor. LOL

That was an epic battle.  I was literally jumping up and down when Shiva jump in the scene.  I knew Shiva would play a big role, but that was more than I expected. Thank you for that TWD!

I’m excited for Season 8, but scared at the same time. This cast has gotten so big.  I predict that there will be mass casualties next season. And some of them will be fan favorites.  Boo!

That’s it until October…ugh! That’s so far away!

Thanks for reading everyone!