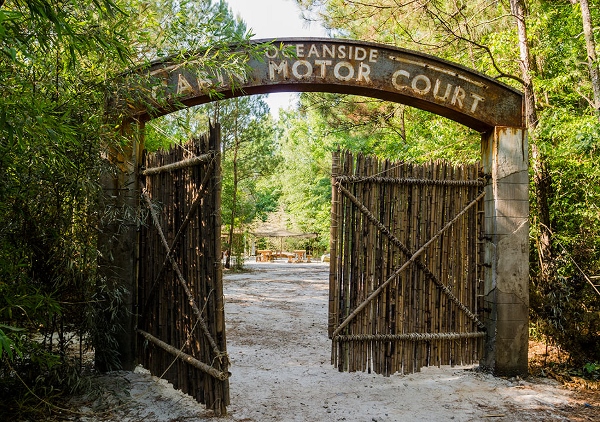 The Walking Dead has shown us several different communities of survivors, but all have one thing in common.  They will do whatever it takes to survive.

Tara (Alanna Masterson) and Heath (Corey B. Hawkins) left the group to scavenge for supplies and food.  This was the same day that Rick’s group raided Negan’s outpost and killed everyone inside.  Tara and Heath haven’t found much in their search.  Heath is getting discouraged. Tara remains optimistic that they will find something. 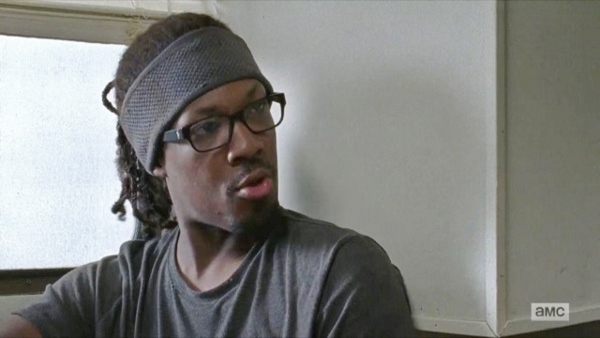 The duo find a small abandoned settlement on a bridge. There is a sand truck in the middle of everything. Tara finds a duffel bag stuck in the sand. She tries to pull the bag out and the sand collapses. Walkers climb out from under the sand. 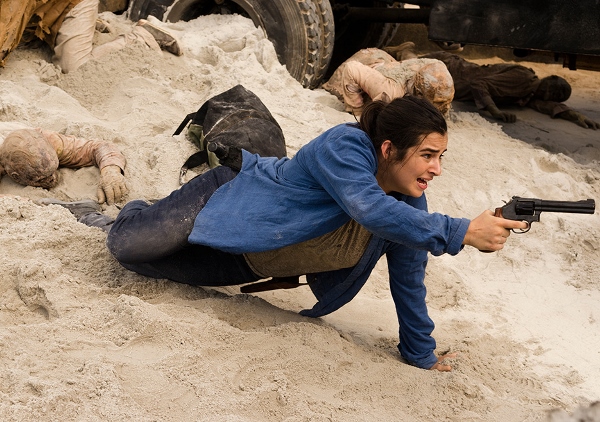 Heath and Tara fight off the walkers. They get separated and Tara falls over the railing of the bridge into a stream below.

Tara’s body is found washed ashore by two girls, practicing their walker killing skills.  The younger girl wants to kill Tara, but older girl, Cyndie (Sydney Park) won’t let her.  Cyndie moves Tara into the shade and they leave her.  Cyndie returns  to give Tara water and food. 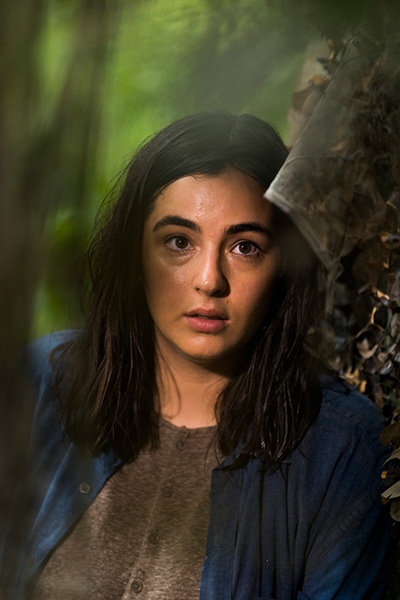 Tara wakes up and see Cyndie leaving.  She gets up to follows Cyndie.  Cyndie leads Tara to a small community of women.  There are literally no men in this camp.  The are young children playing and making things.  Something or someone triggers an alarm and everyone quietly scatters. Tara is alarmed, so she hides.  She sees the women run to a building full of guns and ammo.  Someone shoots at Tara and Tara takes off running. 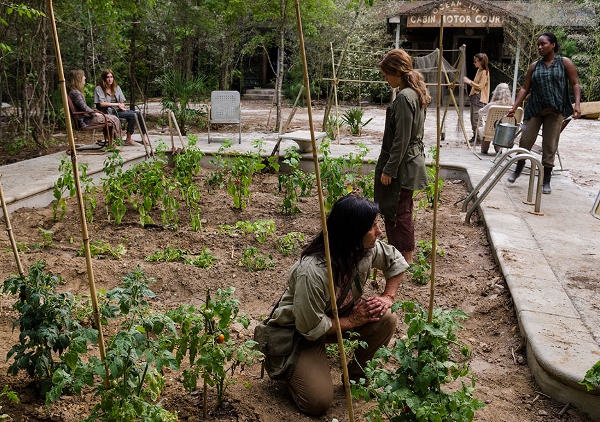 Several women start shooting at Tara, but she manages to evade the bullets. She encounters one of the women and is able to get the gun away from the women.  Tara knocks her out and runs away. When she turns the corner, a young girl is pointing a gun at Tara. Tara surrenders.

Natania (Deborah May) is their leader. Beatrice (Briana Venskus) and Kathy (Nicole Barre) join them to find out more about Tara.  She asks Tara where she is from She lies and tells them that she has been travelling with a friend that she met on a fishing boat.   They ask what kind of fishing boat she was on. She can’t answer, so they answer for her.  Natania asks Tara why she is there. They get nervous when strangers arrive.

Tara tells her that she and her friend found an abandoned settlement on a bridge. They were scavenging until they were attacked by walkers. The two got separated and she fell off a bridge.   She fought the current and ended up on the beach by their settlement.

They ask what she is doing there. She tells them that she saw Cyndie and followed her back to the camp. Tara was hoping to find safety. That’s why she was sneaking around. Tara apologizes for scaring them. She offers to leave.

Natania tells her that they can’t let her go. Normally they shoot any stranger that wanders into their camp. Tara knows where they are and that is dangerous for them. 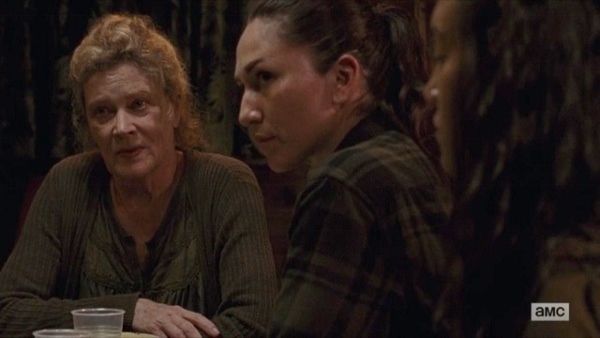 Later at dinner, Natania ask Tara to stay at their community…Oceanside.   It’s a perfect solution…they keep the village secret and Tara gets to live.  They will help her find her friend and he can stay too.

Tara asks where the men is.  Natania said they got into a skirmish with another group and all of the men were killed.  They left their old community and decided that they would kill all strangers.

Natania asks Tara to be honest about where she is from.  Tara tells them about Alexandria, a community with walls and houses.  She says they have had to do bad things as well. Tara tells them about the attack on the satellite station.   She says they didn’t kill those people because they were terrorizing others; they did it to stay alive.  She suggests that the two communities work together to protect each other.

Natania says she will send a guide with Tara to find her friend and escort her back to their community.  Beatrice and Kathy volunteer to go with Tara. 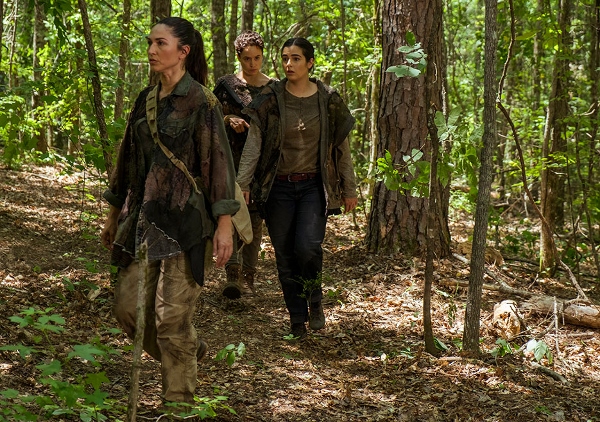 When they get into the woods, Tara makes a run for it when Beatrice and Kathy turn on her.  Tara almost gets away but Beatrice holds her at gun point. Beatrice tells Tara that her people are aldready dead.  The Saviors are the group that killed all of Oceanside’s men.  Every male above the age of 10.  Tara tries to tell her that her group took care of the problem.  Beatrice tells her that the Saviors are everywhere.

Cyndie jumps in and knocks over Beatrice allowing Tara to run away.  Cyndie follows her and tells Tara that she has to swear to never tell anyone about their village.  Tara swears. 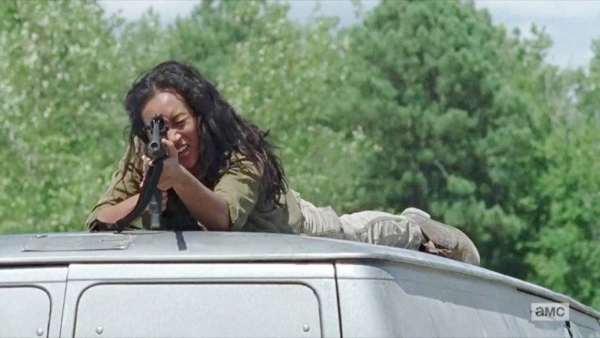 The two make it to the bridge. Cyndie covers Tara as she runs to the other side of the bridge. Cydnie returns home with Beatrice and Kathy.

There is no sign of Heath, except for the tire tracks where the RV was parked and Heath’s glasses.  Tara starts walking home.

Tara stops in a abandoned gift shop to spend the night.  She finds sunglasses and a bobble head doctor.  The next morning she arrives at the gates of Alexandria.  Eugene (Josh McDermitt) meets her and immediately starts crying. 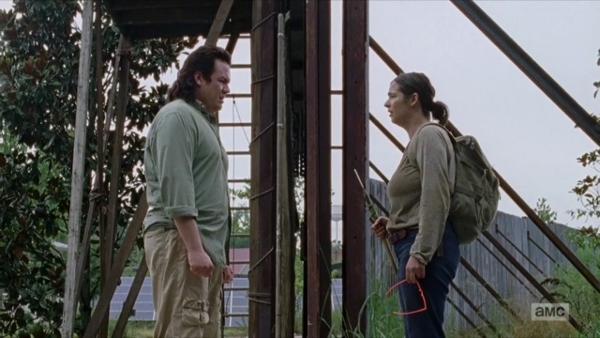 Tara sits in Denise’s exam room, holding the bobble head.  Rosita (Christian Serratos) asks her if she found any guns or ammo that they could use to fight the Saviors. Tara lies and tells her no.  She says she didn’t see anything like that.

Thoughts…yes, these last few episodes have been slow.  They are telling a story that is obviously leading up to something big.

I would like to take a moment to thank the Walking Dead writers for making the women such bad-asses this season!

Four communities – Alexandria, Hilltop, The Kingdom, and now Oceanside, have all been taken over by Negan and the Saviors.  Four!  We’ve seen how each community deals with the tyranny and they each deal differently.  Hilltop people are scared, The Kingdom comply, but remain calm, and Oceanside are running scared.  Alexandria is new to the game and they are doing their best to adjust.  But there are four communities, one with guns, one with food, all with lots of man power that could stand up to the Saviors.

So when does this war begin?

Two more episodes until the mid season finale.  Something big has to happen to kick Rick back into gear.