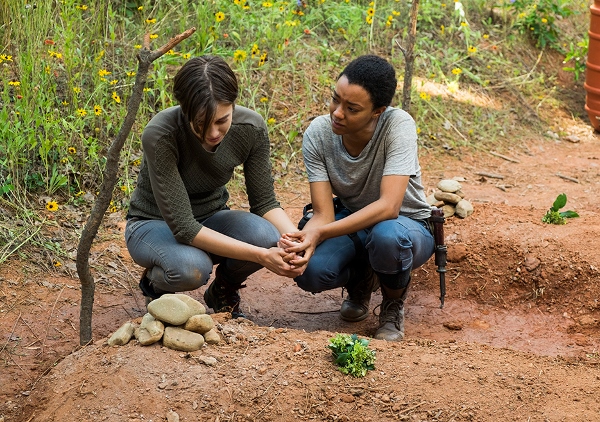 This episode of The Walking Dead reveals what happened to Maggie and her baby.  Sasha and Jesus fight for Maggie’s safety and Carl makes a bold move against Negan.

Maggie (Lauren Cohen) wakes up in Hilltop. Dr. Carson (R. Keith Harris) tells her that there was a minimal tear in the placenta, but the baby is healthy and has a strong heartbeat.  If Maggie takes it easy, she will be okay.  He suggests that she stay in Hilltop until the baby is born. 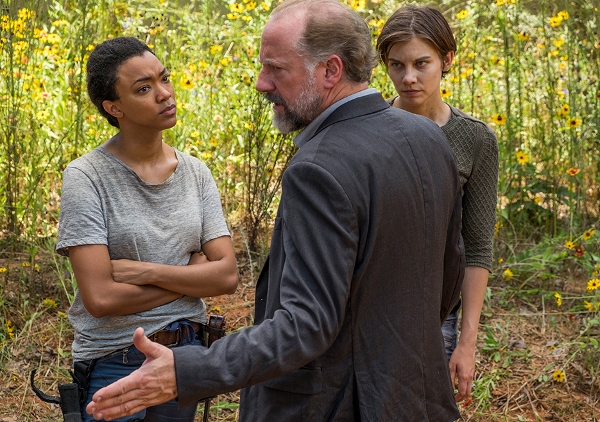 Sasha (Sonequa Martin-Green) shows Maggie where Glenn and Abraham are buried.  Jesus (Tom Payne) joins them.  He has been putting flowers on the graves.  They are interrupted by Gregory (Xander Berkeley) and his rantings.  He is very agitated because Maggie and her people were not able to take care of their Negan problem.  He’s afraid if Maggie stays, then Negan’s men will find her and that will cause further problems for Gregory. He tells her to leave.

Rick (Andrew Lincoln) is trying to convince Carl (Chandler Riggs) to go on a supply run with him and Aaron (Ross Marquand).  Carl is so frustrated with the situation. He refuses to go.  Michonne (Danai Gurira) talks to Carl about Rick’s willingness to give into Negan.  Carl says he’s wrong. Michonne isn’t so sure about their living situation either. She leaves Carl to go figure some things out. 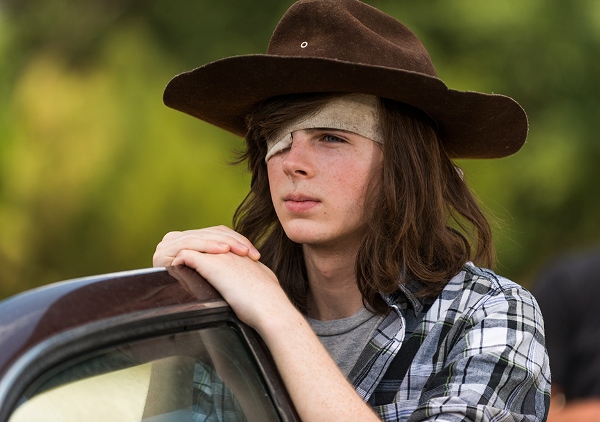 Carl catches Enid (Katelyn Nacon) scaling the wall to leave Alexandria. She tells him that she is going to Hilltop to find Maggie.  He says it’s too dangerous for her to go on her own.  Enid says she needs to go. Carl tells her that he is through saving her.  She tells him she will be okay, better than Carl would be. Enid is sorry that Carl had to witness what Negan did.  Carl says he’s not. Later, Enid is riding a bike to Hilltop when she encounters a walker.  A car drives up and hits the walker, saving Enid. The driver is Carl.

Jesus set up Maggie and Sasha in his trailer and leaves them to rest.  Sasha is trying to find a way for Maggie to stay at Hilltop.  Jesus can’t provide any answers for her.  He only wants to help people, but he won’t leave Hilltop.   Jesus gives Sasha a key chain owned by Abraham. (The one Rosita gave to him.) 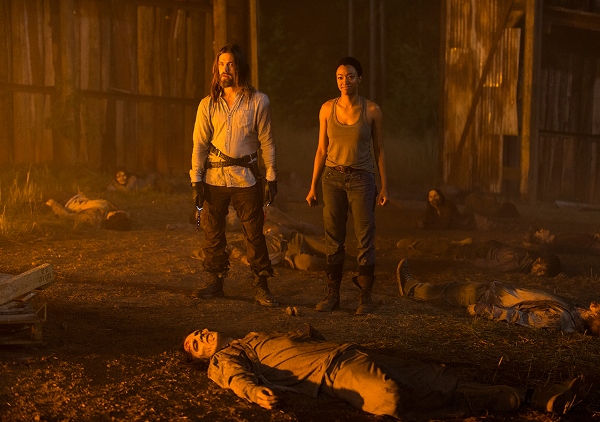 The Hilltop community wakes up in the middle of the night. Someone has parked a car in the yard with music blaring from inside. There are fires lit and the front gates are open.  Sasha jumps into action to try to find a way to turn off the music.  Jesus and two other guards go to help Sasha.  Gregory looks out of his window and sees everything.  He cowers back into the safety of his room.  Maggie uses a tractor to run over the car to stop the music. 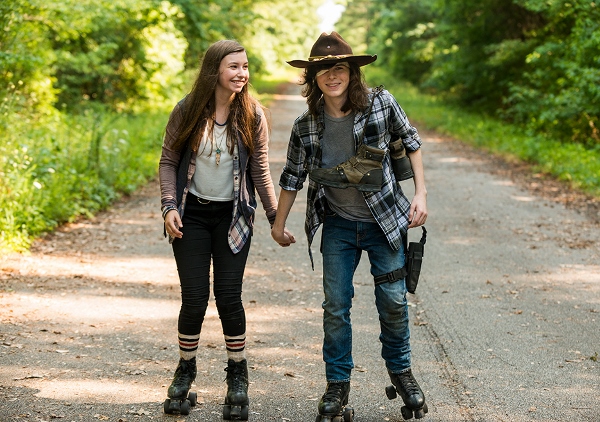 Carl and Enid continue their walk to Hilltop. They are talking about Glenn and Abraham’s deaths.  Carl tells her he didn’t look away because he needed to see it.  That way if he ever got a chance to kill Negan, he wouldn’t hesitate.  Carl apologizes for locking Enid in the closet. She says she didn’t need to see it.  She is worried about Maggie.  They eventually find two pairs of skates. Both kids are smiling as they roll down the road to Hilltop.

Gregory is still insistent that Maggie and Sasha leave Hilltop, even after they saved everyone.  Jesus is fighting for them to stay. Gregory reminds Jesus that he is in charge. He says the responsibility would be to big for Jesus to handle.  Maggie and Sasha come in to fight for Maggie to stay.  Gregory continues to deny them and they hear trucks outside. The Saviors have arrived and Gregory is freaking out!  He tells Jesus to hide Maggie and Sasha in the closet. 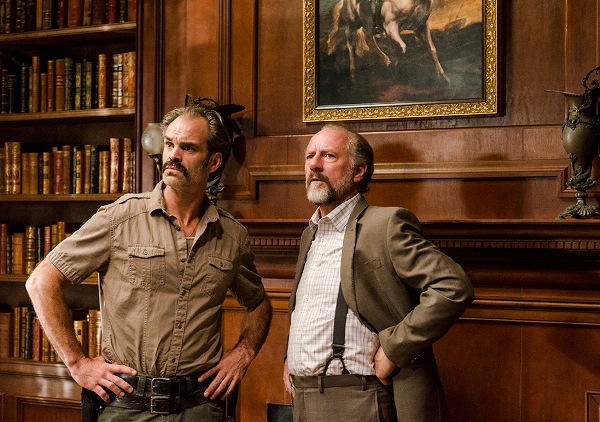 Simon (Steven Ogg) has been sent by Negan to talk to Gregory. The Saviors are the ones who lit the fires, opened the gates and turned up the music the night before.  Simon insists they did all of that to remind Hilltop of the services that the Saviors provide.  He tells Gregory that Rick’s group now works for Negan.  Simon asks Gregory if there is anything they should know about.  Gregory takes him to the closet.  The only thing they find in the closet is a box of Scotch.  Simon takes it to give to Negan.

Carl and Enid reach Hilltop and see Negan’s trucks.  Enid figures out that he came after her not to make sure she was safe, but to find a way to Negan.  Carl wants to find Negan and kill him.  Enid tries to convince him to stay with her.  Carl kisses Enid  She asks him one more time to stay. Carl says he will see her soon.  She walks away and says he won’t.

Gregory is upset with Jesus for not hiding Maggie and Sasha in the hall closet.  He wanted to give them up to Simon.  Jesus fights for Maggie and Sasha to stay despite Gregory’s fears.  He asks Jesus if he is going to be in charge.  Jesus says he’s not, but neither is Gregory.  Maggie hits Gregory and takes back Glenn’s pocket watch.  She tells Gregory that she is staying and he will call her by her name…Maggie Rhee.

Jesus explains to Maggie and Sasha why Gregory was in charge.  He was already put in place when Jesus arrived and no one really could be the leader…until now.  They watch the Saviors leave and Maggie leaves.  Sasha asks Jesus if he can find where Negan lives.  Jesus says yeah.  Sasha asks him to keep that from Maggie.

Maggie goes to Glenn’s grave and finds Enid.  Enid asks if she okay.  Maggie says no, but she will be.

Enid put balloons on Abraham’s grave, thinking it was Glenn’s.  Enid says there was nothing marking the graves.  Maggie had put the pocket watch on Glenn’s grave, but Gregory took it.  Maggie gives it to Enid.  She says they don’t need anything to remember them by…just themselves.

Jesus watches the trucks drive away and jumps in the back of one left open.  Carl is also in that truck..headed to Negan’s.

Lot’s of girl power this season! Last week it was Rosita and Michonne showing more strength than the guys.  This week Maggie and Sasha step up to put Gregory in his place and save the community.  If they hadn’t been there, there would have been so many dead Hilltop residents.  Jesus can’t do it all on his own.

Gregory is such a douche to Maggie, I was cheering when she punched him!  I cheered again when she told him her name was Maggie Rhee!!!  YES!!

And Carl kissed Enid!! But the skating scene was a little cheesy for the Walking Dead.

Carl leaving like this is going to cause so much frustration for Rick. It might even cause another death.  Eeeeeek!

The story line did seem to slow down a bit.  We had to give time to each community to show the impact of Negan in the surrounding areas.  Each community is dealing with Negan in their own special way.  One has to believe that eventually they will all come together to find a better way to trade and help one another.

Regimes fall all the time…Negan’s world is strong, but for how long???

Next week, we finally find out what happened to Tara and Heath.  Will they end up in yet, another community affected by Negan?  Or is their journey something new?

Check out the video for a peak at next week’s episode:

Microwave that day-old pizza and cue up the Law & Order reruns -- it's time to revisit Season 1 of Resident Alien before Season 2 drops on Wednesday. Check out our recap of the first season!

We're back with even more incredible new books coming out in 2022. This time, get ready for everything fantasy!
https://www.geekgirlauthority.com/new-books-of-2022-fantasy-edition/

"Nanny crafts a richly compelling, introspective tale asking us to examine our inner monsters..." Check out our review of Nikyatu Jusu's Nanny!

"...a laugh-out-loud satirical romp with Sterling K. Brown and Regina Hall leading the charge with two powerhouse performances." Check out our review of Honk for Jesus. Save Your Soul!

We had the privilege of chatting with Charlie Davi

Happy 76th Birthday to the Queen of Music (and our

This week’s WCW goes to our favorite half-eleven