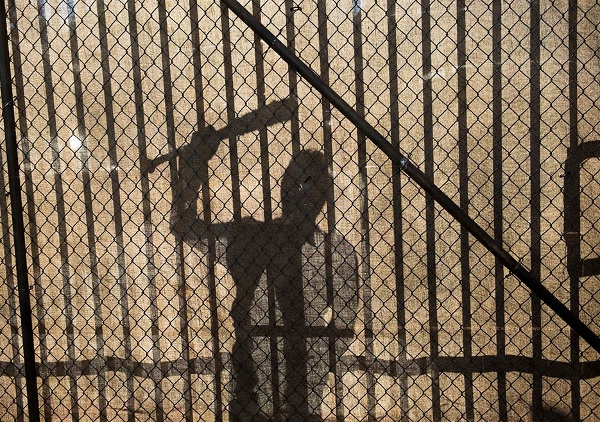 Glenn is dead. Abraham is dead.  Life at Alexandria continues, but how different will it be under Negan’s rule?

Michonne (Danai Gurira) slips away early to practice her sniper skills.  Rick (Andrew Lincoln)  sees her leave, but doesn’t say anything.  She practices shooting at walker and misses. She kills a deer that was in the woods behind the walker. 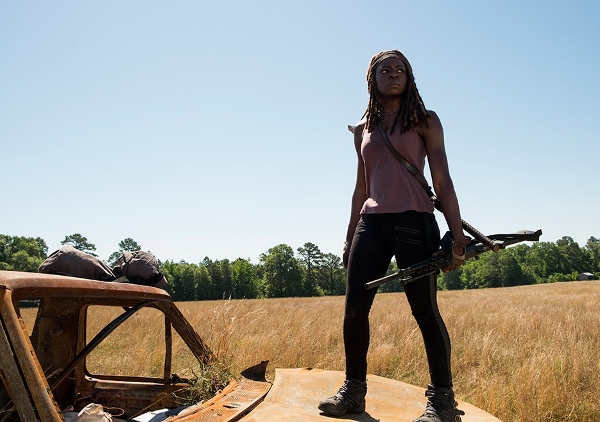 Rick says good morning to Judith as the community begins to stir.  Rosita (Christian Serratos) and Spencer (Austin Nichols) are up for an early run.  Eugene (Josh McDermitt) is at the gate when they ask to be let out and then….

“Little pig, little pig…let me in.” Negan (Jeffrey Dean Morgan) has arrived at Alexandria…a week early.   Rick and the gang are about to find out just how much their little world has changed.  Spencer reluctantly lets Negan in.  Rick arrives just in time to see that Negan brought Daryl (Norman Reedus) along with him.  Negan won’t allow Daryl to talk to Rick. Daryl is his now.  And Daryl is helping Negan’s people load their trucks. 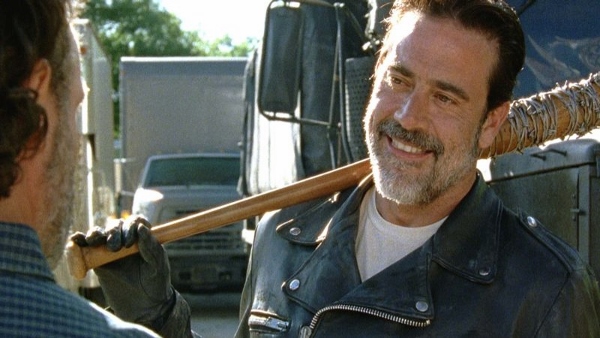 Negan asks Rick to give him a tour of the place as Negan’s men start to raid homes.  He hands Lucille to Rick, allowing him to carry the bat around Alexandria.  They take all of the beds, furniture and all of the guns and ammo.  Negan is taking more than half of their stuff, but he doesn’t take their food.

Negan asks for Maggie (Lauren Cohen), the sick girl. He put two and two together. Negan knows that Maggie was married to Glenn. He hoped to take her back to the Sanctuary to be with him. In the only funny moment of the show, Father Gabriel (Seth Gilliam) comes out of nowhere and scares Negan.  Negan calls him creepy, ha! Father Gabriel implies that Maggie is dead. He even dug a third grave next to Glenn to sell the lie.

Dwight (Austin Amelio) taunts Rosita asking for Daryl’s bike. He says she knows where it is and he wants it brought back to him.  He confiscates her gun, pours out her water, and takes her hat away before letting Rosita and Spencer drive away. 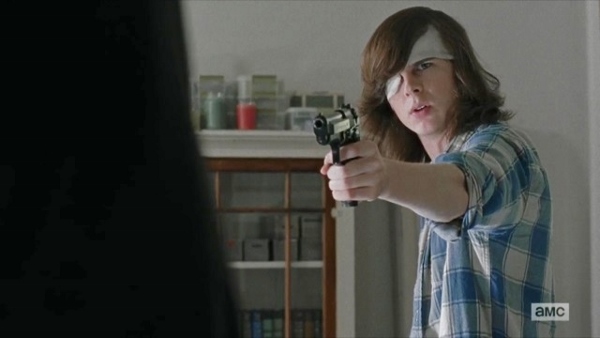 Carl (Chandler Riggs) is pissed.  He pulls a gun on Negan’s men when they enter their home.  He doesn’t want to give in to Negan’s rule.  Carl is not afraid of Negan.  Negan talks him down and Carl gives in. Carl has to helplessly watch as Negan’s creepy men taunt Enid (Katelyn Nacon) about her balloons.

Things get a little tense when one of Negan’s people discovers that there are two guns missing from their inventory.  Negan threatens to kill Olivia (Ann Mahoney) unless the guns can be found.

Rick gathers the Alexandrians in the church and asks for the gun. Rick tells them that Negan is in charge now and he will kill Olivia if the gun is not found.  The Alexandrians are having doubts and are angry about the situation that they are in.  Eugene tells him that not everyone is there.  Rick and Aaron (Ross Marquand) frantically look for the gun at Spencer’s and Rosita’s.  Rick finds the gun in an air vent along with food and booze. 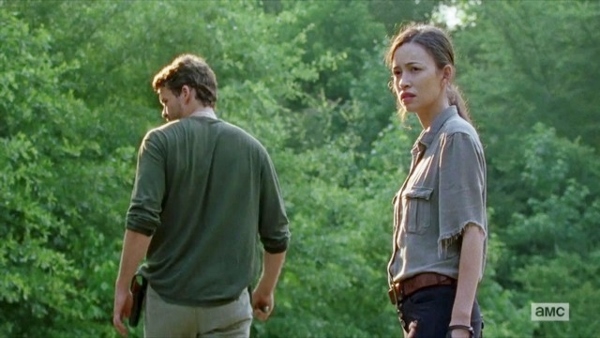 Rosita and Spencer return with Daryl’s bike for Dwight.  Dwight gives the hat back to Rosita.  What they don’t know is that Rosita found some of Negan’s men in the woods. They were walkers, but one of them had a gun. Rosita took it and is hiding it from Negan’s people.

Rick hands everything over and Negan prepares to leave.  Rick sees Michonne return with the deer that she killed.  He meets her in the tower at the gates. He tells her to give up the sniper rifle.  Michonne is not happy about that. She says they need to hide the guns so they can defend themselves.  Rick takes the gun and hands it over to Negan.  Negan tells Rick that he made a trusting move by giving up the rifle.  Negan tells his men to load up and to take Michonne’s deer.  Rick asks if Daryl can stay.  Negan gives Daryl the opportunity to ask to stay. Daryl doesn’t say anything.

Negan has some memorable words for Rick before he leaves. Negan knows he has the upper hand on Rick. Everything Negan asks for, Rick gives to him.  Negan tells Rick to have something interesting for him the next time he shows up.  Or someone will die. 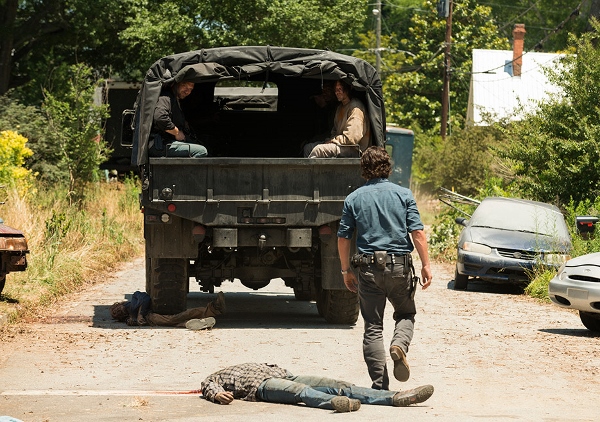 Rick scolds Spencer for hiding the gun.  Spencer is just as frustrated blaming Rick for putting the entire community in danger.  Spencer mentions Glenn and Abraham, blaming Rick for their deaths.  Rick threatens to break his jaw if Spencer ever says anything like that again. 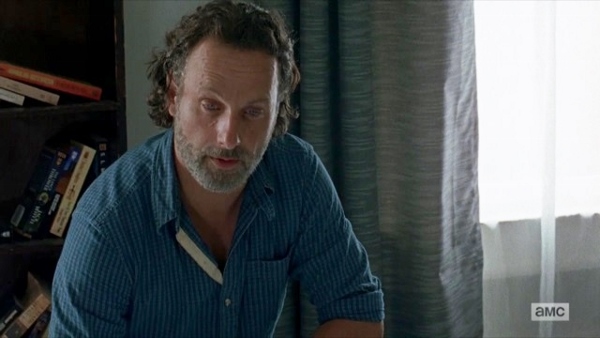 Judith.  Judith is not Rick’s biological daughter.  She is Shane’s daughter. Regardless of that fact, Rick loves Judith and will anything to protect her.   He wants to see her grow up and teach her how to survive.  He says this is how they live to survive.  Rick tells Michonne that they all have to accept it or it won’t work.  She says she will try.  Michonne  returns to her sniper spot.  She sees smoke and goes to investigate.  Negan’s people emptied the mattresses from their trucks and set them on fire. 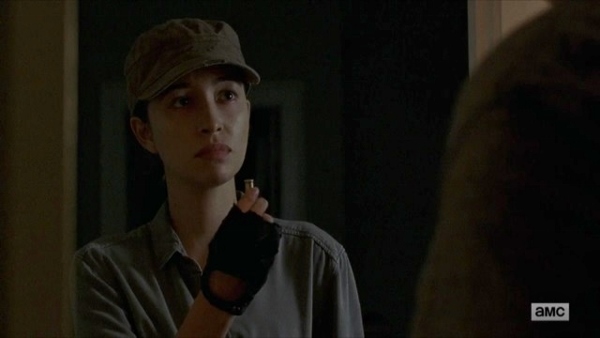 Rosita pays a visit to Eugene later that night. She has a bullet casing that Negan had shot earlier.  She asks Eugene to make her a bullet.

How much longer will Rick have to suffer under Negan?  It’s so frustrating to watch these strong people give into to someone who just carries a bat. Yes, I have read the comics and I was just as frustrated at this point in the story.

We finally get confirmation that Judith is in fact Shane’s daughter. Rick’s devotion to her is so heartwarming. It reminds me that there is still love and goodness in their world. And Rick is willing to do anything to fight for Judith.

And Daryl!  I have to wonder if this is what he was like as a kid.  He was abused as a child and he hasn’t said much about it.  His reaction to Negan and Dwight though…he just shuts down and takes it.  That’s not the Daryl we know.  And I hope he doesn’t wallow in his self pity for long. Yes, he feels guilty about Glenn. But Glenn wouldn’t back if he were in Daryl’s situation. Daryl needs to find that inner strength that tells him to fight to honor Glenn.

I’m pretty excited about how Michonne and Rosita were ready to stand up to Negan. They were clearly outnumbered, but the ladies don’t want to live their lives in fear.  Yeah! The ladies of the Walking Dead are sometimes stronger than the men…and I love that!

Knowing what’s coming…it’s gonna get worse before it gets better…be ready folks.  Next week, Maggie and Sasha move on. I wonder when we will see Tara again.