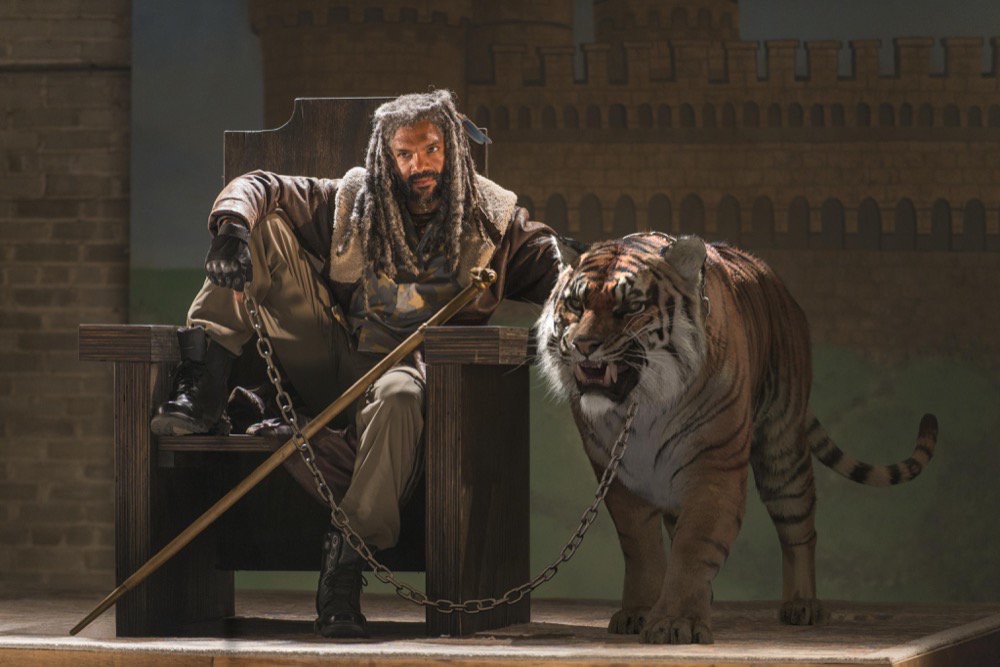 This week’s episode of The Walking Dead is so much different from last week’s season premiere.  The second episode of season 7 catches up with Carol (Melissa McBride) and Morgan (Lennie James).  We also meet some new friends.

At the end of Season 6, Carol had just been shot.  Morgan killed the Savior who shot her.   A couple of men find them and offer to help them. 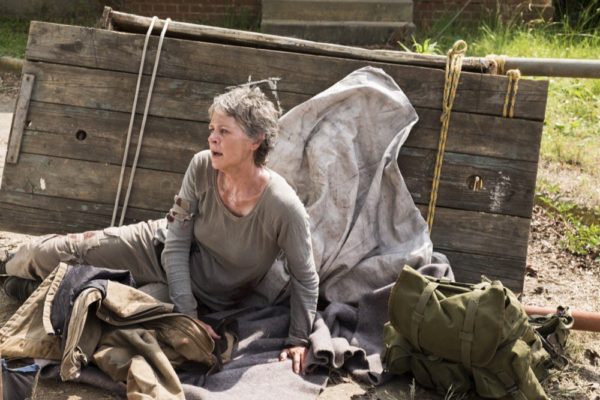 The episode begins from Carol’s point of view as the group is traveling.  They stop to fight a group of walkers that they are having a hard time fighting off  A disoriented Carol runs away and she sees more people on horseback arrive to save everyone.

When Carol wakes up, she sees Morgan watching over her.  Carol wonders where they are and Morgan takes her to see the community.  The community has a school, lots of gardens and looks very safe.  They get to a theater of some sort and Carol meets Ezekiel (Khary Peyton)and his tiger Shiva. 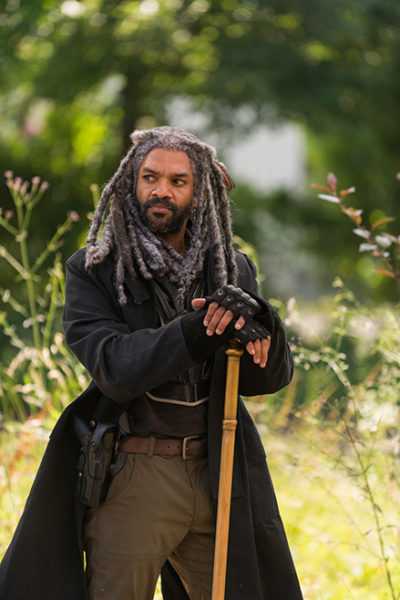 The community is called The Kingdom and Ezekiel is their King.  Shiva, the tiger protects Ezekiel.  Carol is amazed by what she is seeing.  Morgan is a little hesitant about Ezekiel as well, but he seems more willing to accept Ezekiel.  Ezekiel invites Carol to remain among them.  His rules are just that she contribute to the community.  Afterward, Carol tells Morgan that she plans to leave. 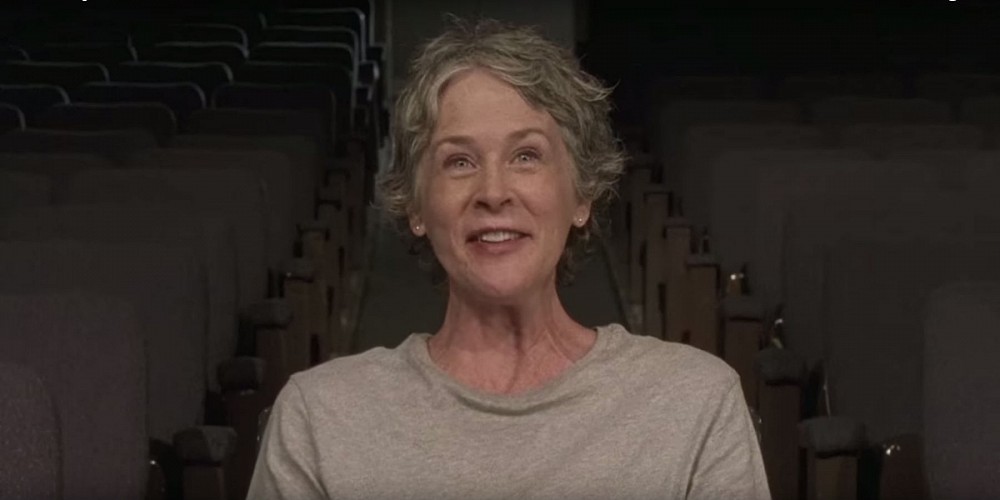 Morgan has been doing his part in the Kingdom.  He goes on runs with some of the men from the community to feed some pigs. They are feeding walkers to the pigs though.  One of the men says that the community cannot know about what’s been going on.  While they pack up, walkers descend upon them.  One of the younger men, Benjamin (Logan Miller) uses the opportunity to practice killing walkers. He gets into a little bit of trouble and Morgan uses his bow staff to save him.

When they return to the Kingdom, Ezekiel asks Morgan to teach Benjamin how to fight with a bow staff.  Ezekiel says that Benjamin will become an important member of his court.  Morgan reluctantly agrees.  Meanwhile, Carol is stealing provisions, chocolate, a knife, clothes, and food so she can leave. 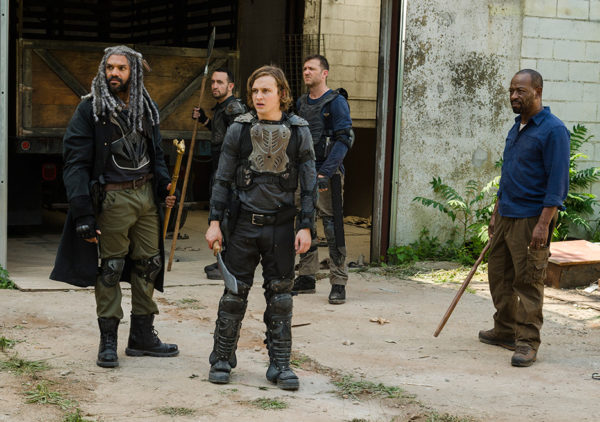 Ezekiel tells Morgan that he is keeping a secret from the rest of the community and he wants Morgan to see it.  They go with the same group of men to meet some other men…Saviors.  The Kingdom is providing the Saviors with the pigs that ate the walkers.  The Saviors are just as nasty to the guys from the Kingdom as they were to Rick’s group.

Ben and Morgan are getting along well.  Morgan even lets Ben borrow his aikido book. Ben asks Morgan about the book and the inscriptions that Morgan wrote in it.  Morgan tells him that no one can give him the answers.  He tells Ben that he has to find his own path.

Ezekiel admits that he was a zookeeper. He saved Shiva’s life one time. And when the world ended, he took her with him.  She has protected him ever since.  He says he was also in community theater, doing Shakespeare plays and even portraying Martin Luther King Jr.  When he arrived with Shiva by his side, the people made him larger than life and created stories about him that made people want to follow him. 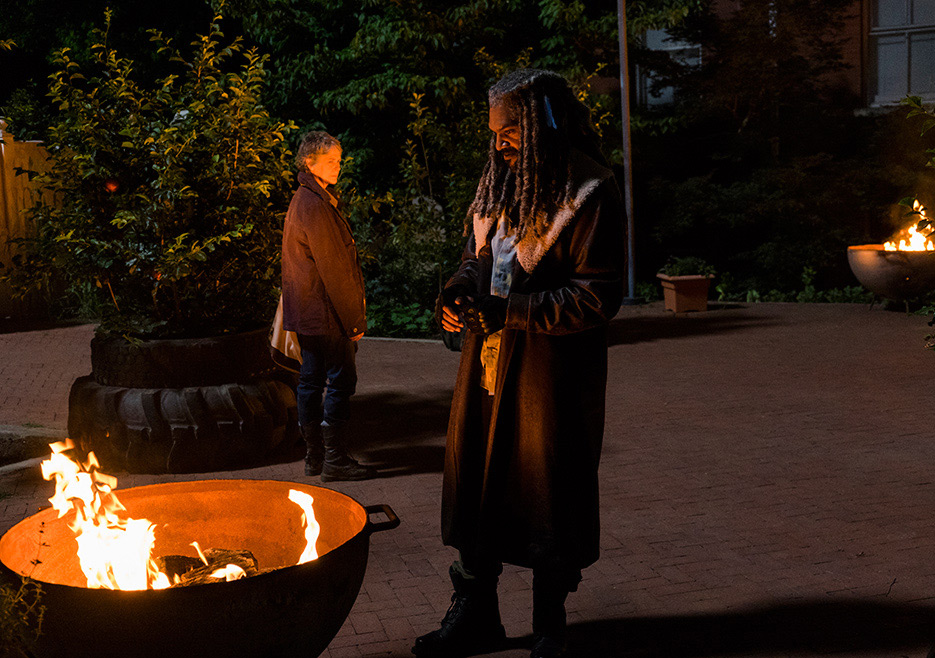 He asks Carol to keep his secret.  She tells him she wants to leave.  He tells her he is sorry for whatever bad things have happened to her, but it’s not all bad.  “Where there’s life, there’s hope, heroism, grace, love,” he says. He has lost a lot as well, but this outlook on life helped him create his world.  Carol asks why he cares, he says, “Because it makes me feel good.”

He tells her she doesn’t have to stay in the Kingdom, but she can stay in a house at the edge of the Kingdom. The next day Morgan rides with Carol to that house.  They don’t say goodbye, but they do semi-apologize for hurting one another.

Carol clears out the house and settle in. Someone knocks at the door and she hears Shiva growling.  Ezekiel is standing at the door with a pomegranate for Carol.

Remember when Rick and the gang first arrived in Alexandria.  People there were delusional about the world outside of their gates.  They were safe and they basically ignored what was happening beyond their walls.  Well, The Kingdom is the same way.  This community is trying to live life as if the world never changed.

The small number of people that do leave the walls, they know the world is different and they are prepared for it, but they act as if they are actual knights of the round table.   It’s kind of funny.  In the back of my mind, I’m thinking, “you’re all dead!”

We also get to see a community that has been found by the Saviors and they are complying with Negan’s demands.  The Saviors that they meet actually respect Ezekiel because he is never late with their deliveries and they always deliver everything the Saviors have asked for.  However, Ezekiel and his men are keeping the arrangement a secret.  That tells me that Ezekiel has no confidence in his community.  Much like Alexandria, the residents of the Kingdom are not prepared for what’s beyond their walls.

When Morgan showed up in Alexandria, I thought it was going to be to teach Rick that there are other options to killing people.  Now I think it’s Carol that needs Morgan’s teachings, when she is ready.  Just as Carol doesn’t want to kill anyone, Morgan realizes that sometimes, it’s the only option.  Ezekiel looks to be on the same page as Morgan.  Violence can be avoided, but at what cost?  And how long can Ezekiel give their resources away before the community realizes it?  When will Negan start asking for more?

Three communities are being controlled by the Saviors.  The Kingdom is doing well and Hilltop is struggling. How will Alexandria serve the Saviors after last week’s devastating loss?  I’m still very sad about that.

Next week, we get to see The Sanctuary.  Ugh…..