THE WALKING DEAD Recap: (S07E14) The Other Side 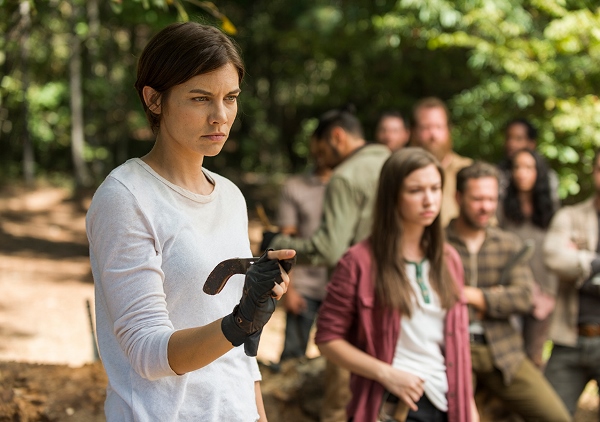 The Walking Dead has been building up to a big confrontation.  Rosita and Sasha decide to make the first move against the Saviors.

Life at the Hilltop community has been productive.  Maggie (Lauren Cohen) observes life that happens.  She and Sasha (Sonequa Martin-Green) train people for the impending war with the Saviors.  Jesus (Tom Payne) works on a layout of the Sanctuary.

Daryl (Norman Reedus) is having a hard time looking at Maggie for any reason.  He feels responsible for Glenn’s death.  Maggie notices his distance and tries her best to get something out of Daryl.

Gregory (Xander Berkeley) watches from afar.  He can see that the people at Hilltop are looking at Maggie as their leader.

Yes, life is quiet at Hilltop.  And then Rosita (Christian Serratos) shows up.  Sasha agrees to help Rosita go after Negan.  The only condition was that Sasha wanted to take the shot. 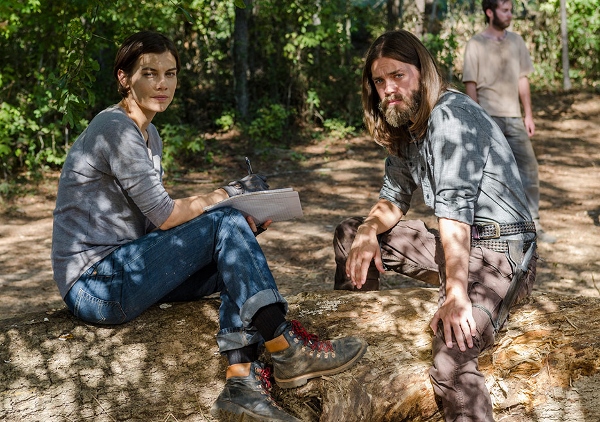 Maggie and Jesus have gotten comfortable with each other, living in the same trailer.  Jesus says he doesn’t mind having a lot of people around.  He says he has always had trouble opening up to people.  Maggie, Sasha and Enid (Katelyn Nacon) makes Jesus feel comfortable.

Sasha sneaks up on their talk as it end and they walk away from the trailer. She goes inside to find a book with bullets hidden inside. Enid and Jesus catch her.  Jesus asks Sasha to delay her mission with Rosita until everyone is ready.  She won’t wait. Sasha tells Enid to take care of Maggie. Enid says ok. She says she will give Sasha a ten minute head start.  At that time, Enid will tell Maggie what they are up to.

A bell rings and the lookout guards yells to everyone that the Saviors are coming.  Enid, Daryl and Maggie run to find a hiding place.  They have to duck into a cellar.   Enid does her best avert one of the Saviors from going into the cellar.  He enters anyway.  Maggie and Daryl watch him closely and prepare for a confrontation.

Sasha quickly packs and meets Rosita, they escape through a passage that goes under the wall. They make their way through the wood, unseen. 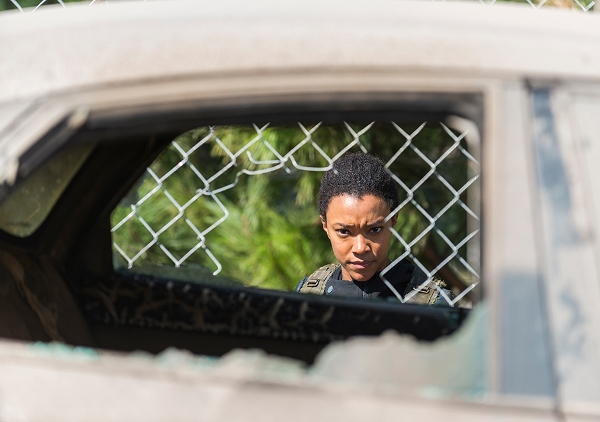 Sasha and Rosita try to hotwire a car, but fail.  Rosita notices Sasha’s necklace. It is the keychain that she make for Abraham. She tells Sasha this information.  Sasha tucks it into her jacket and zips it up. She tries to make small talk with Rosita. Rosita is obviously bothered by the necklace.  They discuss how they will take out Negan. Sasha wants to set up in a near by building and take the shot from afar. Rosita wants to go in into the Sanctuary and seek out Negan to ensure they actually kill him. They are able to find a car that will start and make their way to the Sanctuary.

Gregory meets Simon (Steven Ogg) at the mansion. Simon tells Gregory that they have someone that Negan wants.  Gregory is nervous about who that might be and why Negan wants this person.  Gregory and Simon pay a visit to Dr. Carson.  Simon tells the doctor that Negan needs his services.  Dr. Carson asks why Negan needs two doctors.  Simon says they don’t.  The doctor figures out that his brother was killed.  Dr. Carson tries to object saying he has patients there that need his attention. Simon gives the community a crate of aspirin in exchange for the doctor.

Daryl is ready to pounce on the Savior in the cellar.  Maggie holds him back.  The Savior leaves with some supplies and shuts the door. 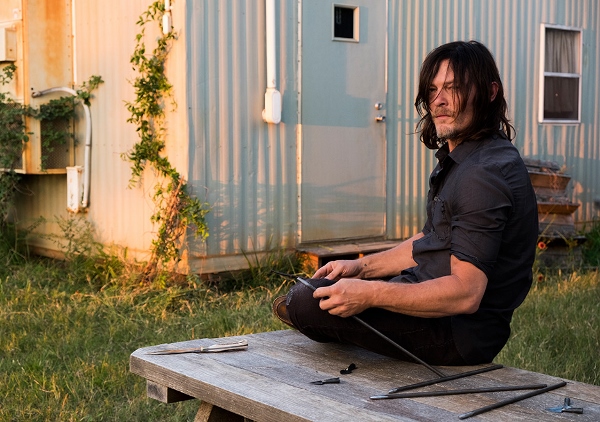 Maggie confronts Daryl about his distance.  Daryl hasn’t said a word to Maggie since he arrived. He can’t look at her, even when she asks him to. Daryl starts to cry and apologizes to Maggie for Glenn’s death.  Maggie consoles him saying that Daryl isn’t to blame.  She says that he is one of the good things in this world. Glenn knew that…he was one of the good things too.  She says she wanted to kill that man, the Savior.  Maggie says they have to win. She hugs Daryl and tells him to help her win.

Sasha and Rosita are set up in a building across from the Sanctuary entrance.  Sasha scopes out the entrance and sees Eugene ordering people around.  Rosita thinks Eugene is playing some angle.

Sasha and Rosita are waiting for Negan to appear. Sasha asks how Rosita knows how to defuse a bomb.  Rosita tells Sasha how she acquired most of her skills. She learned about bombs, cars, knots and other stuff from the men she dated.  Rosita said the men always wanted to save her. She was always able to surpass their skills. 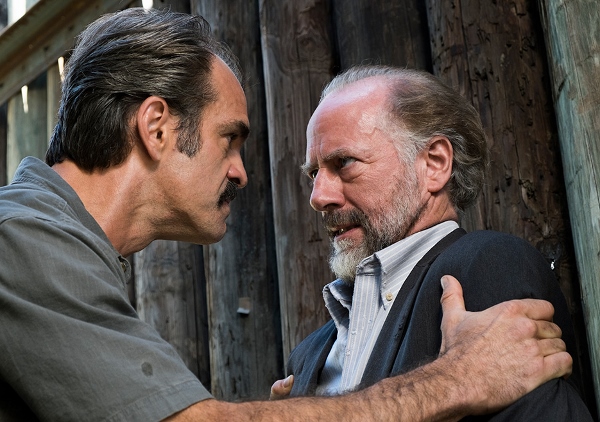 Gregory pulls Simon aside to assure him that he is on Team Negan.  He tells Simon that he has do whatever he can to keep the people’s trust. A less cooperative person could take over and he may need Negan’s help to keep the peace.  Simon tells Gregory that if that happens to find him.  He gives Gregory a note that will get him into the Sanctuary if he ever needs help.  The Saviors leave as the Hilltop residents look at Gregory disappointedly.

They talk about Abraham.  Abraham saw Rosita’s value. He was different.  She says she wasted time hating Sasha. And she wishes she could have told Abraham that she was happy for him.

Sasha sees a truck approaching with Dr. Carson in the back.  Negan emerges from inside. Sasha cannot get a clear shot.  Next they hear Eugene on the walkie telling the Saviors to beef up security.  It’s clear that Rosita and Sasha will have to enter the compound to get to Negan.

Back at Hilltop, Gregory gives Jesus a list of new assignments for everyone. Jesus accuses him of splitting people up to protect himself. Gregory warns Jesus about how he talks to him, especially with the Saviors around.  Gregory says he looks out for his friends.  He realized they are not friends.  Jesus leaves Gregory’s office and Daryl asks him where Sasha and Rosita are.

At the Sanctuary, Eugene discusses security protocol with one of the Saviors.  Rosita and Sasha kill the savior and attempt to rescue Eugene.  He tells Rosita that he won’t go with her and he runs away.

Sasha tells Rosita to keep watch. Sasha climbs through the fence and uses a lock to keep Rosita on the other side. She tells Rosita that it’s not her time.  Alexandria still needs her.  Sasha runs into the Sanctuary.

A group of Saviors run to the courtyard yelling about an intruder. Rosita has a mini breakdown and runs away. She notices someone in the dark watching her…holding a crossbow.

I was happy to hear more about Rosita’s background. Rosita had a lot of cool skills and no history to back it up. She was very affected by Abraham’s death.  Her reaction has been so erratic.  She hasn’t opened up to anyone.  Rosita became a time bomb and has already exploded once.  Spencer tried his best to try and learn more about Rosita, but she always had a wall up.  So it was good to see her open up, especially to Sasha. They loved the same man. That’s awkward no matter what the state of the world is.  They were able to look past the hurt and work together for a common goal…vengeance.

As for Sasha, I feel like she was saying goodbye to everyone.  Everyone knows about Sonequa Martin-Green’s upcoming role on the new Star Trek series.  So everyone automatically assumes she will die before the season’s over.  That may not be the case, but her last words to Rosita seemed like a very final goodbye.

Daryl and Maggie had me in tears.  There’s still a bit of pain after Glenn’s death. This has to be weeks, maybe a month or two after Glenn’s death, so the pain is still pretty fresh.  Daryl felt responsible. He jumped at Negan that caused Negan to retaliate on Glenn’s head.  Maggie doesn’t blame Daryl. She blames Negan and the Saviors. Her revenge and Daryl’s redemption will come when they defeat the Saviors.  However, even with Maggie’s forgiveness, Daryl will continue to blame himself for Glenn’s death.

Eugene…oh Eugene… He hasn’t changed much, has he?  He does what he needs to do to survive. And Negan has given Eugene a lot of responsibility; more than he had in Alexandria.  Negan looks at Eugene differently. Eugene is unlike anyone else at the Sanctuary. And Negan recognizes Eugene’s need to have some sort of power.

The big moment, for anyone who hasn’t read the comics was when Jesus opened up to Maggie. We learned that he grew up in a group home, he is gay, and he has a hard time finding where he belongs.  Jesus burst onto the scene in the most hilarious way. And now that we are learning more about him just indicates he will be around for a while.

Next week looks intense. The second to last episode always is. I’m excited about this one!