A war is brewing on The Walking Dead.  Richonne search for guns and supplies.  Rosita looks for a quicker solution to their Negan problem.

When we last saw Rick (Andrew Lincoln) and the gang, they barely escaped the Scavengers. Instead, they made a deal with the Scavenger leader Jadis to provide them with lots of guns.  This week Rick and Michonne (Danai Gurira) are on trip to find guns to fulfill that agreement.  They search many places and almost run into a group of Saviors.  They eventually end up at a carnival of walkers with lots of guns. 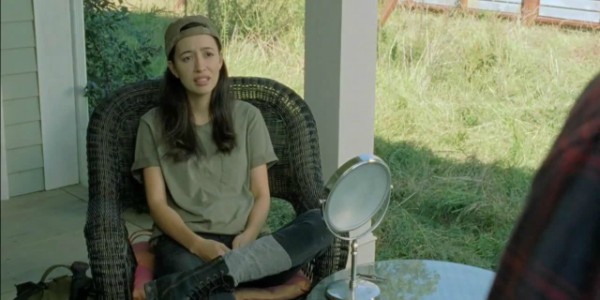 In Alexandria, Rosita (Christian Serratos) is restless. She is desperate to leave and find more guns.  Tara (Alanna Masterson) tries to calm her down, but Rosita only lashes out at Tara. Tara tells her to save her energy for the Saviors.  Rosita goes on a search of her own. All she finds is a toy gun.

The carnival has walkers dressed in military uniforms and carrying guns.  The place looks like there was a gun fight.  As they stand on top of a building, surveying the carnival, the roof caves in and the two fall into the building. Inside the building is lots of boxes of military food rations. 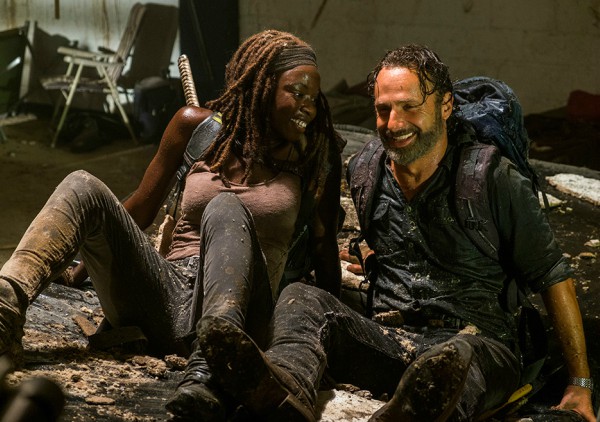 Rosita returns to Alexandria and finds Gabriel (Seth Gilliam).  She is very agitated that she was unable to find one real gun. Rosita blames Gabriel for trying to talk her out of killing Negan. She says if she had gone through with her plan, Negan would be dead, Eugene would be safe and a lot of other Alexandrians would still be alive.  Gabriel tells her that the community still needs her. That’s why he said those things to her.  She is being foolish by directing her anger at him.

Richonne make a camp in the building and talk about their plan to take the guns.  Michonne asks what happens after they kill Negan. How will the communities rebuild?  Rick says that they will find a way for all the communities to work together.  Michonne tells him that they need a leader to do that.  And that leader should be him.  He says he doesn’t want to be a leader. He will if Michonne leads with him.

Later, even though they are safe in the building, Rick remains awake, while Michonne sleeps.

Tara babysits Judith and weighs the pros and cons of telling Rick about Oceanside.  Oceanside was decimated by the Saviors. Tara believes they have a good reason to join the fight. She is afraid that Oceanside will fight Alexandria instead.  She promised to keep the location a secret, but they need the people and the guns.  Oceanside has plenty of guns.

Richonne go into the carnival to kill the walkers. Michonne distracts the walkers while Rick moves a car to close a gap in the fence. The plan fails when the brakes fail on the car.  A gun start shooting at the group, causing more walkers to close in on the car.  Michonne has to jump into the trunk to avoid gunshots.  The car stops and walkers surround the it. 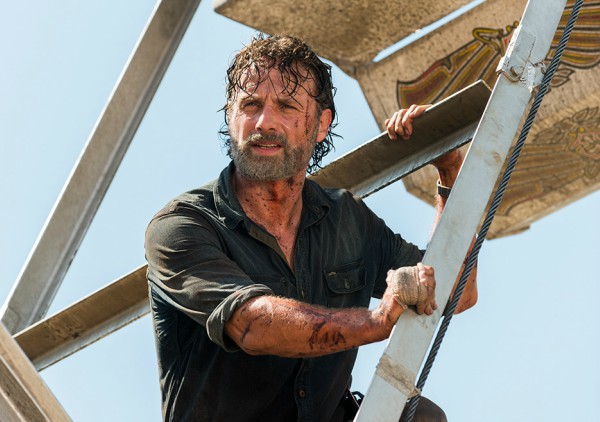 Richonne are able to get out through the sunroof and they head for the rides. They split up to lessen the herd of walkers.  Rick see a deer and climbs the ferris wheel to get a good shot.  The ferris wheel car breaks and Rick falls out of the ride.

Michonne rushes to him and sees the walkers eating something fresh.  She thinks they have Rick.  She drops her sword and is ready to die from grief.  Rick jumps out of a box car and they both start fighting again. 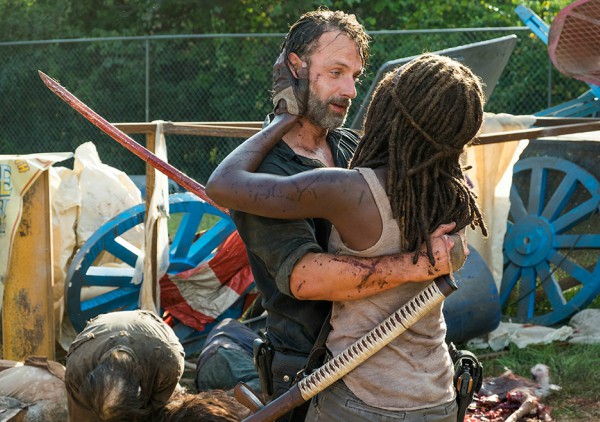 Richonne collects a lot of guns.  As they are picking things up, Michonne gets overwhelmed.  On the way home, Rick tells her that he hasn’t been sleeping.  He says they are going to win. And they are going to lose people. They could lose each other.  He says that they are fighting for the future.  Michonne says she afraid of losing Rick. He asks her to lead if anything happens to him.

Alexandrians deliver the guns to the Scavengers. Jadis (Pollyanne McIntosh) says it’s not enough.  Jadis wants to keep all of the guns that they brought and she wants her cat sculpture back.  Rick has to negotiate to keep 20 guns and the cat.  Jadis agrees, but they still need more guns. 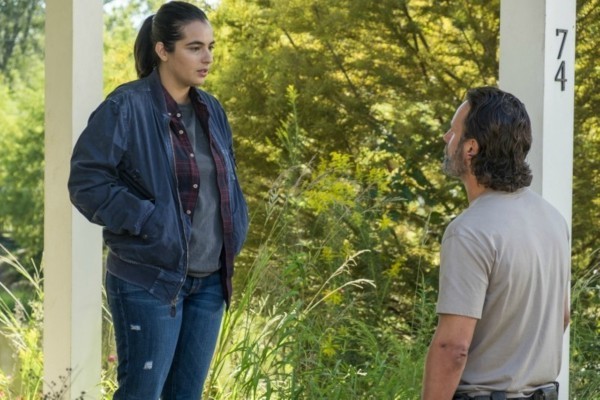 Later Rick asks Tara if she has seen Rosita.  Rosita didn’t showed for guard duty.  Tara says she doesn’t know, but she has something to tell Rick.

Rosita shows up at Hilltop to find Sasha (Sonequa Martin-Green).  Sasha says she will help on one condition…she gets to take the shot.  Rosita pulls out a sniper rifle and hands it to Sasha.  She tells Sasha says Richonne found guns, but they won’t move yet.  She says she memorized Daryl and Carl’s description of the Sanctuary.  Sasha says they could both die. Rosita says its a one way ticket.  The ladies are going to kill Negan.

Rosita is going to get someone killed!! Maybe Sasha…We’ve all seen this before. Nothing good can come out of a rogue group member who has already made mistakes.  Olivia and Spencer died because of Rosita; Eugene was taken because of her. What else can Negan do to make Rosita stop and calm down?

Rick has his hands full already with trying to convince the Kingdom to join and to provide guns to the Scavengers. Now he has to approach Oceanside? I hope he sends Michonne. This is definitely a job for the women of the resistance to convince the women of Oceanside to stand up and fight.

It’s going to be a long road to victory…but we know Rick can do it!  Next week, Carol searches for answers…Click here for the preview.