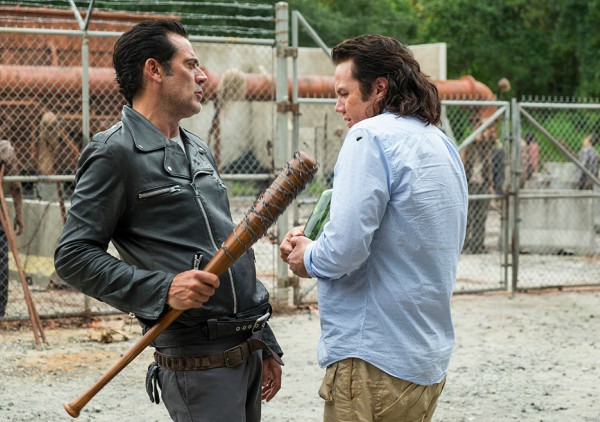 The Walking Dead catches up with Eugene at the Sanctuary. Dwight looks for Sherry after she betrays Negan.

Dwight (Austin Amelio) and other The Saviors find Fat Joey’s body. Dwight rushes to find that Daryl has indeed escaped.

He runs to his room and finds it has been ransacked.  He finds Daryl’s prison outfit on his floor and the note that was slipped to Daryl. It looks as if Dwight recognizes the handwriting.  He sits and studies the note.  Someone knocks at the door. It is other Saviors.  They beat up Dwight. Negan (Jeffrey Dean Morgan) watches from the doorway.

Negan returns from Alexandria with Eugene (Josh McDermitt) as his guest.  Eugene is crying. He is afraid.  Savior Laura (Lindsley Register) leads him to his own room.  Laura tells Eugene that Daryl escaped, but Eugene doesn’t know where Daryl could be.  Laura offers Eugene some food and leaves.

Eugene locks to door behind her.  He looks around his new room, he looks in the refrigerator and sees food and beer.  He turns on the radio and likes what he hears.  (Easy Street).

Negan put Dwight in Daryl’s closet and talks to him through the door. The Saviors went looking for Daryl. Negan says when they got back, Sherry was missing.  Negan thinks Sherry let Daryl go.  Dwight says it wasn’t her.

Negan opens the door. He thinks Daryl either ran home or is on his way back to kill them.  Negan tells Dwight that he needs to find Sherry.

Dr. Carson (Tim Parati) cleans up Dwight. He thinks that Sherry was the one to let Daryl go.  He reminds Dwight to stay loyal to Negan.

Dwight goes back to his room to get ready to leave.  He finds two cigarettes and one has lipstick on it.  He gets his bike and leaves the Sanctuary. 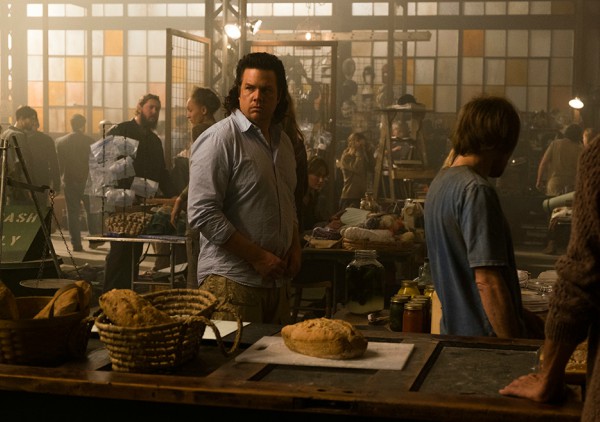 The next day, Laura shows Eugene around the Sanctuary and how things work there.  She takes him to see Negan.  The first question he asks is, who are you?  Of course Eugene answers with his name.  The others answer “Negan.”  Negan asks Eugene if he is smart.  Eugene is more than happy to tell Negan just how smart he is. He says he has a PhD and worked on a human genome project.  Negan asks Eugene for a solution to keep walkers from falling apart.  Eugene tells him to use hot metal and pour it over the bodies to keep them together. Negan loves the idea. And to reward Eugene, he’s going to let Eugene spend time with his wives…but no sex.

So when he gets to hang out with Amber (Autumn Dial), Tonya (Chloe Aktas), and Frankie (Elyse Nicole Dufour), he just plays video games. The girls are bored and tell him that they would enjoy an intelligent conversation.  He tells the girls that he’s too smart for them.  They ask if he could make a bomb out of ??? He says no, but he could make something explode from everyday items. They ask him to show them.

The girls take him outside and watch him make foam spray out of a beaker.  Then he blows up some balloons filled with hydrogen. The girls laugh and are thoroughly entertained. 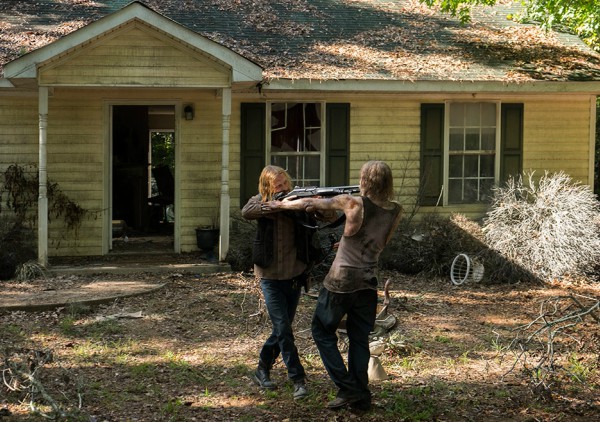 Dwight and Sherry had set up a meeting place if they were ever separated.  Sherry was there, but she left.  She wrote a note explaining that Dwight had a bad memory.  Sherry reminded him that he promised to bring her pretzels and beer.  She says she knew he would forget. Sherry says it’s her fault that they lived in the Sanctuary.  It’s her fault that he became a man he hated.  Sherry knew that Dwight hated Daryl because Daryl reminds Dwight of who he used to be.  She let Daryl go so Dwight could live. Before Dwight leaves the house, he leaves a bag of pretzels and a six pack of beer.

Frankie and Tonya return to Eugene’s room. They tell him that Amber is sad because she hates the way she is forced to live. They ask Eugene to make a pill to help Amber commit suicide.

The next day, Eugene goes to get what he needs to make the pills.  He tries to cut in line is is forced to use his position of power get the supplies he needs…and a few more things he doesn’t need.

Dwight returns to the Sanctuary.  He tells Dr. Carson that he found Sherry and she was attacked by walkers. Dr. Carson says to forget about her. 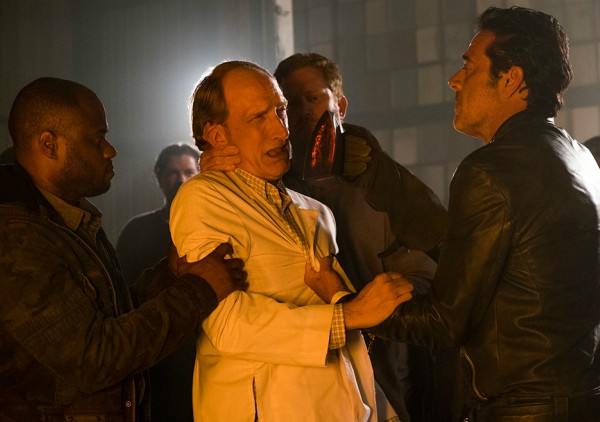 Laura takes Eugene to the furnace room. Negan has gathered a crowd.  He tells Eugene to pay close attention. Negan swings Lucille at Dr. Carson.  He found a note from Sherry to the Dr. Carson that says “goodbye honey.”  He blames Dr. Carson for allowing Sherry to let Daryl go.

Dwight told Negan that he found Sherry before she was torn to pieces.  Dr. Carson says that Dwight is lying.  Negan says that Dwight gains nothing from lying.  Dr. Carson repeatedly apologizes to Negan.  Negan drops the hot iron and it looks like he is going to let Dr. Carson go. Negan throws the doctor into the furnace.  He puts his arm around Dwight, looks at Eugene, and says, ‘it’s a good thing they have a replacement for Dr. Carson.” 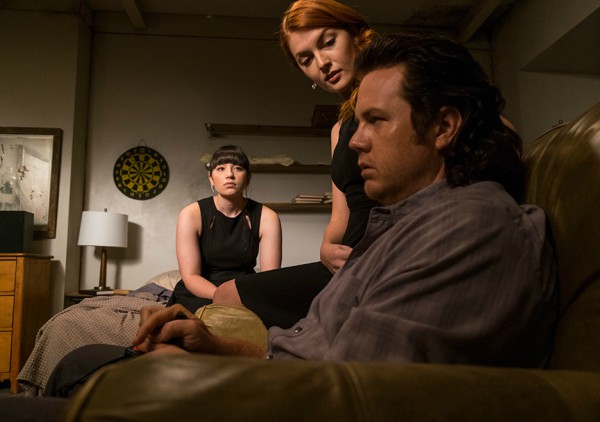 Frankie and Tonya ask Eugene for the pills, but he refuses to give them up.  He talks the girls that he’s not stupid. He know the pills are for Negan.  They threaten to tell Negan that the plan was Eugene’s idea. He tells them that Negan won’t believe them.  And they, unlike him, are replaceable. The girls call Eugene a coward and leave.  Eugene agrees.

Later, Negan visits Eugene. He says there’s no need to Eugene to be scared anymore.  Negan starts to ask who he is.  Eugene answers that he is Negan before Negan can finish the question. 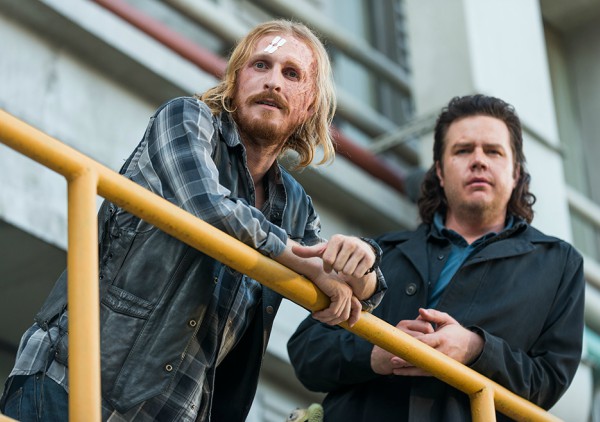 Later, Eugene oversees the fence line workers.  Dwight joins him and asks if he’s really onboard.  Eugene says yes.  They exchange names and Eugene says, “We are Negan.”
Thoughts…

This episode was slow, but it establishes more depth about Dwight.  Comic book readers know how important Dwight is.  With Eugene at the Sanctuary, that new friendship between Eugene and Dwight could become Negan’s kryptonite.  It’s clear that not all of the Sanctuary residents are happy under Negan’s rule. Someone is going to get the courage to stand up to him soon.

This uprising is going to take a while. The seed has been planted, but not everyone is on board yet.  Something crazy is going to happen that will bring everyone together and take a stand against Negan.

I like Negan.  I hope he stays around for a long time!

Check out the trailer for next week’s episode of The Walking Dead.