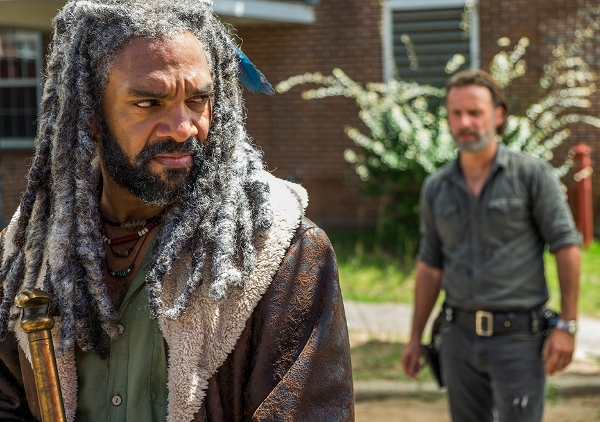 The Walking Dead returns after eight episodes of Rick and the crew being terrorized by Negan and the Saviors.  It’s time for them to fight back and regain control of their lives.

We start where we left off…in Alexandria.  Gabriel (Seth Gilliam) is on watch and all is quiet.  Next, we Gabriel go to the pantry and take all of the food and all of the weapons.  He packs up a car and leaves.  (Did anyone else see the passenger?)

Rick (Andrew Lincoln), Michonne (Danai Gurira), Carl (Chandler Riggs), Rosita (Christian Serratos), and Tara (Alanna Masterson) had just arrived at Hilltop and were reunited with Daryl (Norman Reedus).  Maggie (Lauren Cohen), Sasha (Sonequa Martin-Green), and Enid (Katelyn Nacon) are living at Hilltop now.  Gregory (Xander Berkeley) is telling them that he will not cooperate with their plans to stand up to the Saviors.  He will not allow any of the Hilltop members to join them either.  He keeps talking about how Alexandria said they would take care of the Saviors and they failed. And he’s not going to do anything that will lead their failure back to Hilltop. 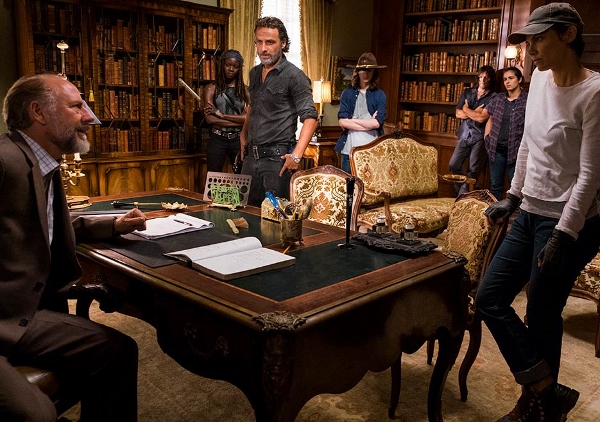 Rick is disappointed about Gregory’s decision.  Enid shows Maggie and Rick that there are Hilltop members ready to fight. They are thankful, but they need more people.  Jesus (Tom Payne) says it’s time they met King Ezekiel (Khary Peyton).

At the Kingdom, the group are greeted by men on horses.  Richard (Karl Makinen) is one of the men and he greets Jesus.  He tells them that Rick and the others request a meeting with the King.  Richard reluctantly takes the group to Ezekiel.

Rick and the others see that the Kingdom is thriving community and well protected.  Tara sees Morgan (Lennie James). Everyone is happy to see him. Richard comes back and says Ezekiel is ready to see them.

Rick and Daryl ask Morgan about Carol (Melissa McBride). Morgan tells them that Carol was shot, but she is okay.  She wants to be left alone.  He also says that he had to kill a man to save Carol.

Jesus approaches Ezekiel to introduce him to Rick.  Rick proceeds to tell Ezekiel that the time has come for them to band together and stand up to the Saviors.   Richard likes this idea and speaks up in favor of joining Alexandria.  Ezekiel asks for Morgan’s input.  Morgan doesn’t want to have to kill anyone. He says if they just tried to capture Negan, then maybe that would be enough.

Rosita tells him that the Saviors killed Glenn, Abraham, Spencer and Olivia.  She tells him that Negan took Eugene (Josh McDermitt) and had Daryl too until he escaped. Now Daryl is a walking target.  Morgan is sad to hear the news.  Ezekiel says he will give them his decision in the morning.

Elsewhere, the young “squire” Benjamin (Logan Miller) is walking in the woods and runs into Carol. He says he is checking up on her for Ezekiel. Ezekiel likes to know the people he cares about are doing ok.  He offers Carol water and food.  She asks why he would do that.  He says because there aren’t many people left.  They have to help each other to survive.  That’s pretty much the same excuse Benjamin gives to Ezekiel.  Benjamin believes they have to help Rick and Alexandria fight against the Saviors.

The next morning the group goes back to Ezekiel to discuss his decision about joining in on the fight. Ezekiel says that his community came at a cost. It was the price of lives and limbs and children losing their parents.  He doesn’t want to spend anymore lives to keep the peace that he already has with Negan and the Saviors.  He offers asylum to Daryl since Negan is looking for him. The group is very disappointed in Ezekiel’s decision and asks him how long he thinks he can keep the Saviors out of the Kingdom. 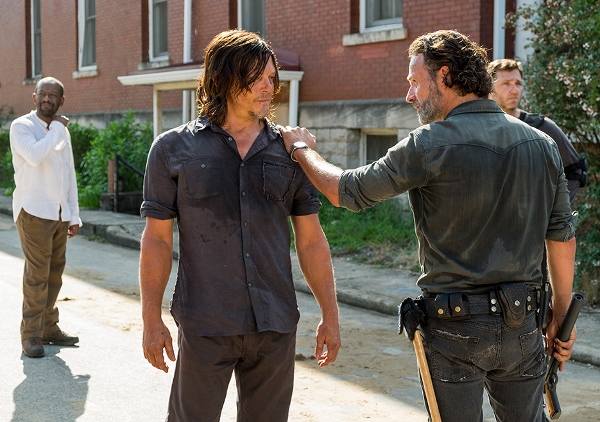 The group leaves and Richard offers to go with them to fight.  Rick tells him and Daryl to stay behind and keep trying to change Ezekiel’s mind.

On the way home, the group is stopped by a blockade of cars set up by the Saviors.  As they move the cars to get past the blockade, Michonne finds a trip wire, armed with explosives.  Rick wants to use the explosives later in a fight.  They all work to get the explosives off of the wire.

They can hear Negan over the radio talking.  Negan has discovered that Daryl is missing. The Saviors are going to Alexandria.  They have to get to Alexandria before the Saviors do. 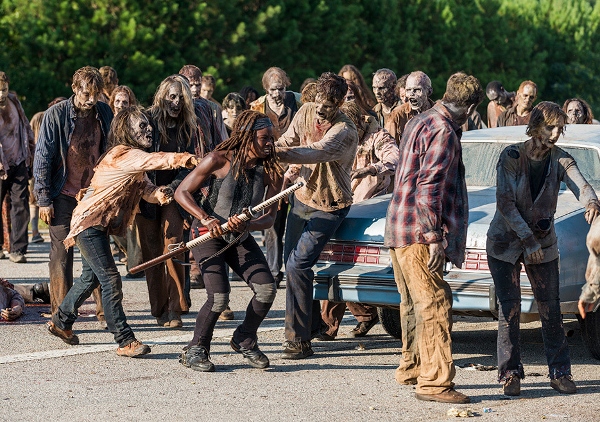 There’s also a hoard of walkers are headed toward them.  Jesus, and Sasha leave for Hilltop on foot.  Rosita, Carl, and Tara carefully work to disarm the explosives.  Rick and Michonne pull of an amazing clothesline to take out some of the hoard.  The wire is tied between two cars. They hot wire the cars and drive toward the walkers, slicing a lot of them in half with the wire.  They narrowly escape the rest of the hoard and head back to Alexandria.  Jesus and Sasha run back to Hilltop on foot.

The Saviors, led by Simon (Steven Ogg) show up just as Rick and the gang get home. I start to tear up the place looking for Daryl saying they’re going to kill them if they find him.  They find the food pantry is empty. Aaron (Ross Marquand) tells him that it’s hard to keep things on the shelves.

The Saviors prepare to leave. Simon apologizes for leaving the place in such a mess. Simon says  if Daryl shows up, Rick will need his hatchet.  The Saviors will come back. And they will kill Daryl when they find him.

Rick ask Aaron what happened to the pantry they say don’t they don’t know.  They said they can’t find Gabriel either.  He was on watch the night before.  When they woke up the next morning, he wasn’t at his post and the pantry was empty.  Tobin (Jason Douglas) says they think he took the food and ran.  Rick says Gabriel wouldn’t do that to them.  Rosita disagrees.  Rick finds a notebook in the pantry and flips through it.  He shows the notebook to Aaron on a page that just says “boat.”  Aaron wonders how did Gabriel would know that that they were out there.  They decide to go back to the boathouse where Rick and Aaron found all their supplies.

Eric (Jordan Woods-Robinson) tells Aaron that he doesn’t want him to go.  Eric just wants him to be safe and wants them both to stay alive.  Aaron has a sense of duty to protect the community and Eric. 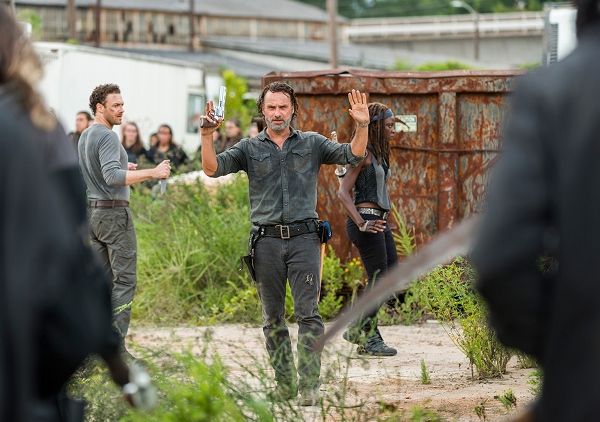 At the boathouse, the group looks for any sign of Gabriel.  They see footprints and they follow them to another building.  They are met by people pointing guns in their faces. When they stop, Rick looks at them and smiles.

(All photos courtesy of AMC.com)

I completely understand why Ezekiel would not want to get to skirmish with the Saviors. He has an established a relationship with the Saviors that works for him and he doesn’t have to tell his people about the arrangement.   It’s just a matter of time now before the Saviors will force their way into the Kingdom and take what and who they want, the same way they did in Alexandria. When that happens Ezekiel will know exactly what Rick and Jesus were talking about and why they will need to stand up against the Saviors.

It’s also probably going to take the death of one of his closest people Jerry, Benjamin,  or Richard.  Benjamin would be really devastating for Ezekiel to lose.

And then there’s Carol.  What will it take to get her back into the fight.   She doesn’t know that Glenn and Abraham are dead.  She wanted to be left alone to get away from having to kill people.  I think that hearing about Glenn will be a wake up call for Carol.   Now that Daryl is that the Kingdom, that will also be a factor to bringing Carol in back into the game.   And then Carol can talk Ezekiel into joining them, because Ezekiel likes Carol…a lot!

What is Gabriel up to and why did he take the food and all the weapons from the pantry? It reminded me of when he decided to lock all the doors to his church so that none of his parishioners could get in and they all died.   However, Gabriel has grown from that experience. He has become bolder and more considerate. So yeah, I agree with Rick. Gabriel wouldn’t do that to them.  Not this Gabriel.  There was a passenger in the the car with Gabriel.  I’m pretty sure he was forced to pack up the food and weapons.

It is really annoying that there are so many groups of people out there with controlling leaders.  Can’t these people think for themselves?

What do you think? Who are these emo-hoodie people?  Maybe another group from the comics that we haven’t met yet?  If I hear the words Alpha and Beta, I’ll know for sure. But until next week, check out the trailer for the next episode of The Walking Dead.