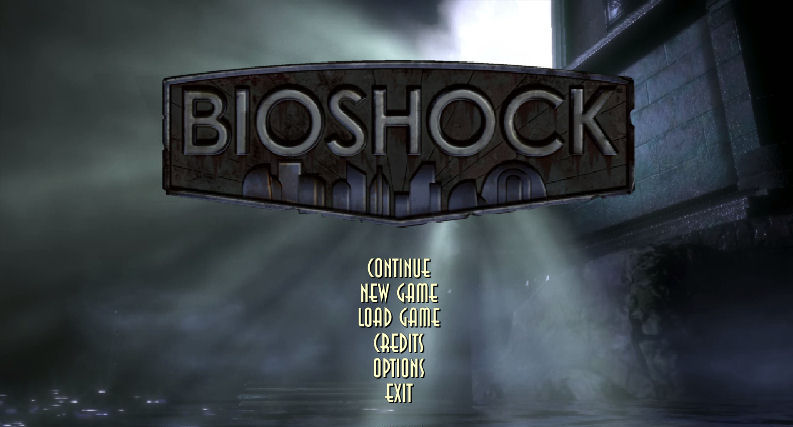 In September 2015 I was supposed to be married. But by the end of 2014 I realised that I had begun to fall out of love with my fiancé. There was no drama behind it.  The relationship had simply run its course. But we both were in denial. In June that year, just before we split up we got an apartment and even though we weren’t together we thought we could make it work. We were both dealing with the reality of our failed engagement, we couldn’t draw a line between our friendship and our old relationship. We were self-destructing. 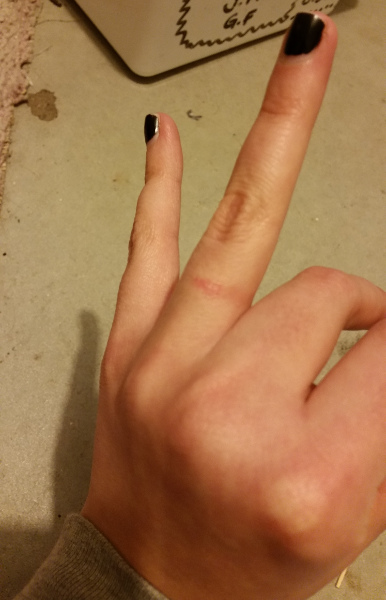 I never took a photo of me wearing the engagement ring, only when I had to remove it because it was giving me a rash.

Things were tense, but not aggressive. Two weeks into our lease, in a failed moment of judgement, I changed our dynamic and he left. After six years we were finally done. I was living alone for the first time in my life and not only did I have to accept my relationship was over, I’d lost my best friend. Depression set in, harder than it ever had. I stopped eating and, for the first time in my life, I was put on medication. I should have gone back to my psychologists. I should have moved in with my mum. Instead I went to work, lived on coffee and came home to cry.

On one particularly difficult day I walked out of work at 9am on Wednesday morning and didn’t come back until the following Monday.

My ex-fiancé and I didn’t have much between us, so he didn’t leave me much; a bed, a TV (to be returned eventually), a PS4 (which I paid him out the half he’d spent on it) and my PS3. The apartment had no television reception. The phone line needed fixing before I could set up an internet connection. So I began by blindly watching through my DVD collection, picking New Girl as my binge of choice, which only helped me feel so much.

Behind the medication, the litres of coffee, and the drunken nights, out there was still a very sad, highly disconnected individual. My disassociation was so great that going to work, talking to people, doing anything at all felt like someone else was doing it on my behalf and just relaying the details. And negative influences were all around me, a demoralising work place, friends more concerned with making sure they were prominent in my life – unforgotten – than if they were helping me or not, unwanted attention from strangers. It was easy to let myself be swayed by the noise. I stopped caring if what I was doing was beneficial or not, I was willing to implode as long as I could lock the door on what was going on in my head. 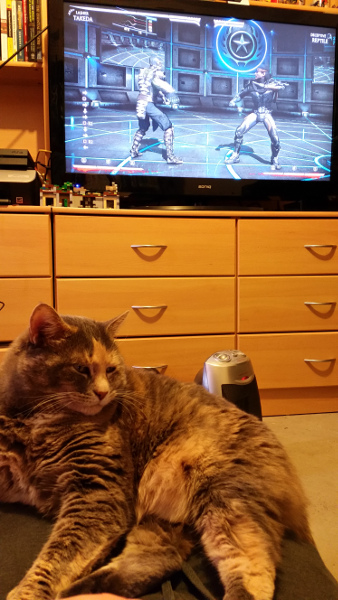 Mortal Kombat X, the reason we got a PS4 in the first place

Before the move, I’d started dabbling in Mortal Kombat X. Fighting games were something I seemed to excel at. For a basic playthrough there’s not a lot of skill involved, not much to think about being good at. Button mash until you win. So on days when I felt I could, I picked up my controller and gave it a beating.

There’s only so much a fighting game can hold back and the depression got worse. I started seeing my psychologist again. There was a lot to pick through: a huge betrayal, which became two, which became a big mess with no clear exit. There was nothing I could see that could get me out of the sadness, out of the pain. I stopped within myself, making awful plans. But when I played video games, even the basic brawlers, my success relied on me being somewhat present. Video games don’t progress unless you engage with them. Music still plays, films still run, but a game stands still. While the major mess of my life was unfolding I played through Bioshock – twice. Both times with people who were part of the negativity but have since bowed out of my life. 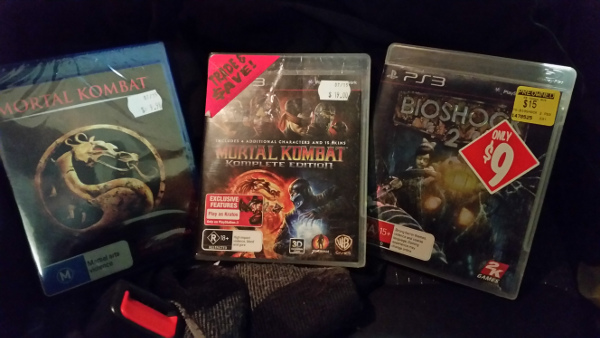 I found my own copy of Bioshock 2. Plus some more Mortal Kombat.

I don’t associate the game with them and the state my life was in, I associate it with how it made me feel – alive. 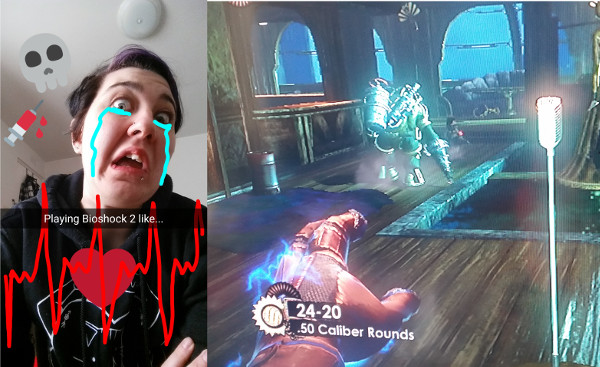 Bioshock is still a horror game!

I scoured bargain bins at EB Games for my own copy. Bioshock became my lighthouse, my own beacon of hope. I finally felt there was something I could do to help me get through. I eventually found a copy of Bioshock 2 for PS3, interestingly while out with my now ex-fiancé. We had gone out to catch up, make sure things were as okay as they could be. And slowly, but surely, because the game also terrified me, I chipped away at it. Spending an hour at a time playing and comforting myself with biscuits. I even paid homage to the game and what it meant through a silly crossover cosplay at PAX Australia 2015. 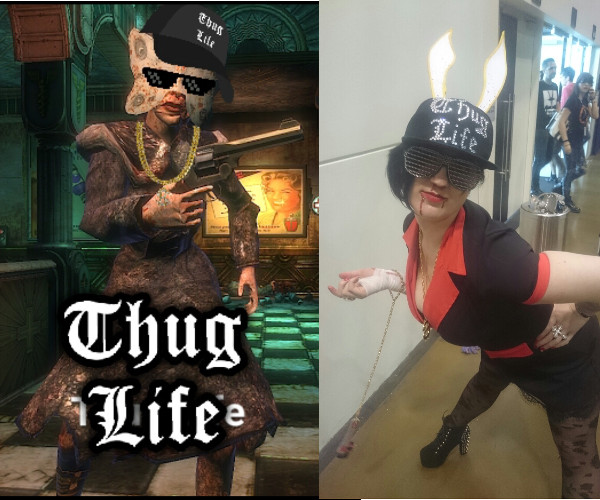 And the Thug Life Splicer was born

So coming home from work, or getting up early before the day started and throwing myself into a game gave me a direction, a distraction, a reson d’etre. It brought me back into the present of the game at least, and that was better than the nothing I was living in. Once I finally had an internet connection I discovered that I could download games from the PSN. So I put down a little money here and there, playing games I’d never heard of, and letting the world of gaming possibility unfold.

It was very freeing. Living alone and gaming for myself meant there wasn’t anyone to judge my choices or my progress. I could play whatever games I wanted, on any difficulty level I chose and not have to worry about the gamer label that gave me. Nothing about what I was doing mattered to anyone but me, and considering at that point not a whole lot mattered to me either I didn’t judge or second guess myself for what I was doing or what I was playing.

And every game was worth playing. Even if it just meant that I found a genre of game I didn’t really enjoy. Soon I was playing AAA games and sitting outside in the sun eating (yes, I’d started doing that again too) beautiful platters of cheese and berries. New Year’s Eve saw myself and the dorky (but lovely) guy I had been sort of dating play Diablo III until midnight in my still mostly unfurnished apartment. But I didn’t care, and nor did he. What a night of stupid wonderful fun it was. 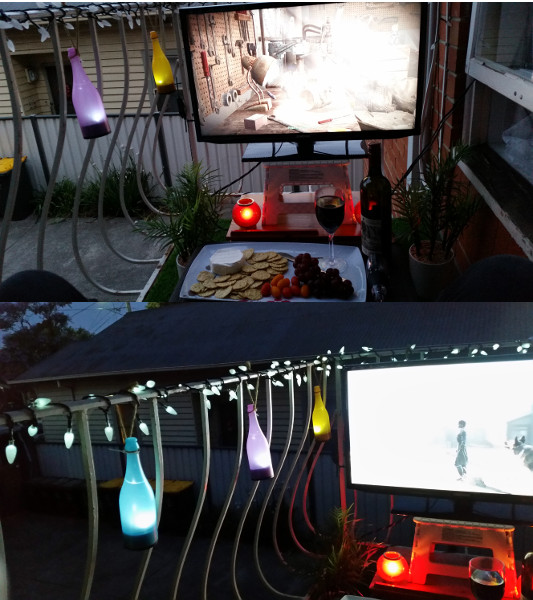 Fallout 4 on a balmy night with cheese and wine.

A few final things from the mess of 2015 were still crumbling down but I didn’t feel like it was too much anymore. And having a library of games to come home to when things did start to get overwhelming was a huge help. I no longer needed medication, I was getting back to a stable point. I was still seeing my psychologist and working hard on the “why”s of 2015. Most importantly, I wasn’t afraid of gaming anymore. I wasn’t intimidated by the sheer weight and hype of AAA titles. And after writing about Darksouls last year I went and picked up Darksouls III. It’s not a universe I’m familiar with and I’m currently still not very competent with it, but I’m letting it teach me, just as I did with all the other games I played.

Beyond Eyes taught me it’s okay to grieve, Three Fourths Home reminded me to talk to family, The Witness taught me to observe, Everybody’s Gone to the Rapture taught me to listen, The Vanishing of Ethan Carter made me think about the actions and motivations of others, Cave Story taught me to persevere, Journey reminded me I wasn’t alone, Flower showed me I was capable, Fallout 4 didn’t mind that I made my own choices and let me safely explore.

And Bioshock, the first game that I really picked up when I had nothing else, taught me to fight for my life.