Last week on Once Upon a Time, Emma faced the new villain, Gideon for the first time. She was able to defeat him, giving everyone a chance to breath.  Regina brought back Robin from an alternate reality.  His presence will cause quite a stir, especially for Regina. 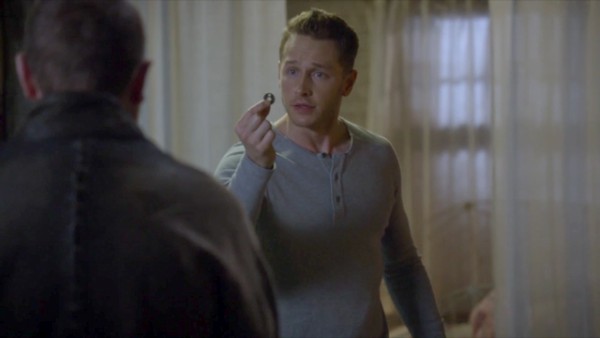 Prince Charming wasn’t always a prince…and the prince wasn’t always charming. That much we knew about David (Josh Dallas) and his twin brother James (Josh Dallas).  What we didn’t know is how the two got separated.  Rumpelstiltskin (Robert Carlyle) of course.

David and James were very ill as babies. Their parents, Robert and Ruth couldn’t afford enough medicine for both boys.  Rumpelstiltskin made a deal with them to save the boys.  The cost was to give up one of their sons and give him to King George.  Robert agrees, but doesn’t like the deal.  And that’s why James grew up a Prince and David grew up a farmer.

David always believed that his father died in a cart accident.  He thought his father was a deadbeat drunk.  He accepted his death and never thought about it again.  The Evil Queen (Lana Parrilla) gave David a coin that he gave to his father for good luck. David hasn’t thought much about that coin until he sees the ghost of his father.

The vision of his father makes David pass out. Hook finds him and David brushes it off.  He thinks he just needs to sleep.  He hasn’t slept since Emma (Jennifer Morrison) disappeared. David feels better about Emma chances now.

Robin (Sean Maguire), the new Robin wakes up in Regina’s house.  He is trying to adjust to his new life in Storybrooke.  Regina  (Lana Parrilla) gives him some of the old Robin’s clothes. 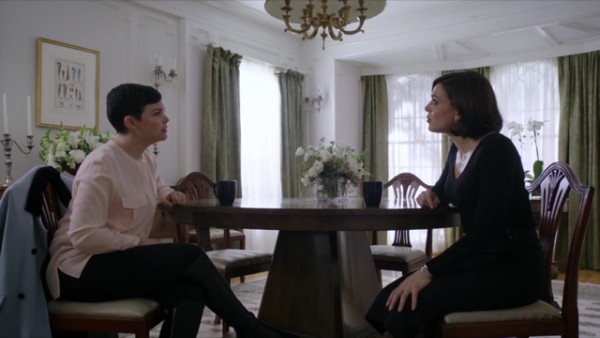 Regina tells  Snow White (Ginnifer Goodwin) about the new Robin. Snow is not excited. Snow says though they may look alike, they are not the same.  Look at David and James. They are two totally different people.  They are twins and couldn’t be more different.

Killian Hook (Colin O’Donoghue) is talking to Archie (Raphael Sbarge) to get advice on how to talk to David. David has been very cold toward Killian lately.  He reminds Killian that he’s nothing much but a pirate.  Killian tells Archie that he is going to propose to Emma.

David and Snow go back to their sleeping schedule.  David wakes up and he sees Robert’s ghost again.  He asks Robert what he wants. Robert says “truth.”

In a flashback, Robert, David’s father is at the bar. King George comes in and announces that he will reward anyone who can bring back his abducted son James.  Robert believes this is his chance to do something good for his family. He wants to find James and take him home where he belongs.  Robert tells his wife and David that he will be leaving to find James.  David give him a coin for good luck. 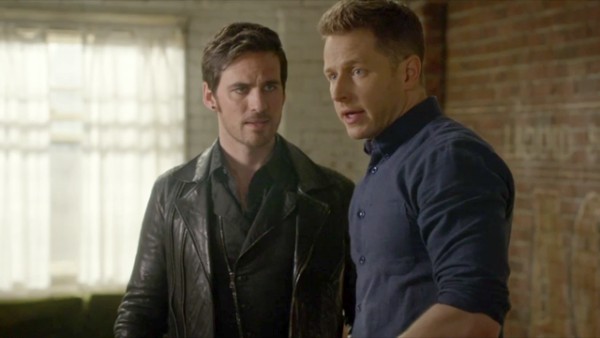 Killian visits David to talk about Emma.  David is distracted and asks for Killian’s help.  He wants to know why he’s seeing his father’s ghost.  Killian says that Emma is better at solving things like this.  David says he doesn’t want Emma, he wants Killian to help him.  Killian can’t pass up the opportunity.  He wants to prove to David that he is a good man.

At Regina’s, Regina shows Robin the story book.  He has many questions. They are interrupted by Zelena (Rebecca Mader).  Zelena stops by to tell the new Robin to stay away from her baby. Regina assures her that the new Robin won’t take baby Robin away from Zelena.  Zelena leaves and Regina finds that Robin has left the house.  He left the book open to his story and a picture of him with the Sheriff of Nottingham. 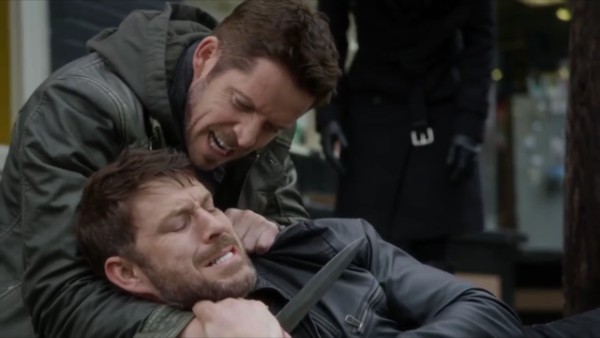 David tells Killian that he needs things from Emma’s shed to cast a spell. The spell will show him where his father was killed.  Killian is hesitant to break into Emma’s place. David reminds him that he is a pirate, it’s in his nature to break in to places.   Emma is out sailing with Henry (Jared Gilmore).  The coast is clear for them to get into the shed.

In the past, Robert goes to Rumpelstiltskin to ask for help. He tells Rumpel that he owes Robert.  Robert wants Rumpel to find James for him. Rumpel agrees to help Robert for one hair from his head.  Robert agrees and Rumpel gives him a ticket to Pleasure Island.  He tells Robert that James ran away from King George. 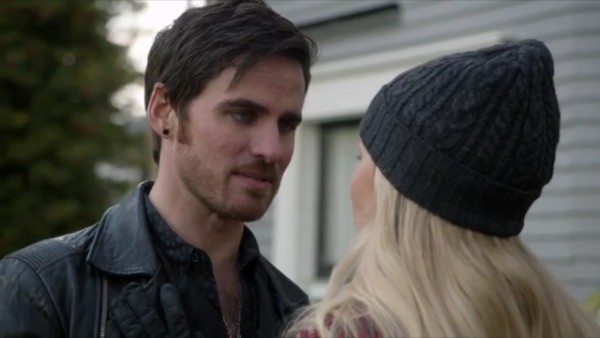 Emma almost catches David breaking into her shed.  Killian distracts her by telling her about his visit to Archie.  He says he had a hard time dealing with her disappearance and impending death.  Emma is happy that Killian was able to share his feelings with her.

Regina shows Robin her mausoleum.  She tells him about her past and she shows him her wall of hearts.  Regina reveals that he has a daughter in the new world.  Robin isn’t thrilled about the news. Regina promises him that they can figure it out together.  Robin kisses Regina.  Regina doesn’t seem to like it. 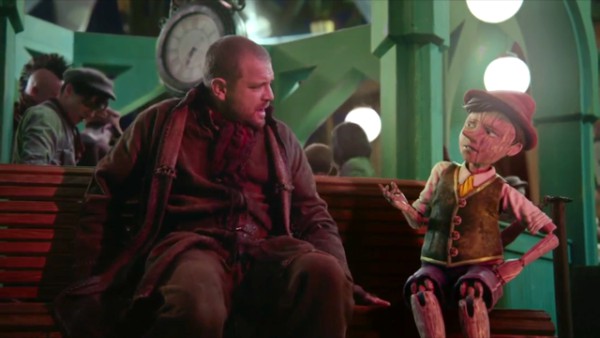 In the past…Robert arrives at Pleasure Island. Pinocchio is there and helps Robert find James.  James ran away from King George.  He says he doesn’t want to be a knight.  Robert tells him that he can go home with him. He tells James that he will have a brother.  James agrees to go and they are seen trying to escape.

David asks August/Pinocchio (Eion Bailey) about Pleasure Island.  August says he remembers meeting Robert.  He didn’t know that was David’s father.  David said he thought that his father was just a drunk.  David realizes that Robert was trying to save their family.  August tells David that he took some pages out of Henry’s book that might help him learn more about Robert.

David says he knows who killed his father. Killian doesn’t want David to go.  David handcuffs Killian to a bike rack and leaves to confront his father’s killer.

Robert and James are leaving. They run into King George at the pier.  James tells them that he doesn’t want to go with the King. The King blames Robert for James’ disappearance. He tells his guards to kill Robert. 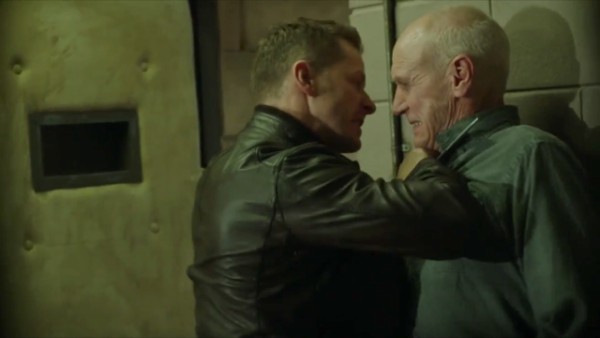 David goes to the prison to see George.  He pulls him out of his cell and holds a knife to his throat.  He says he will kill George for killing his father.

Killian breaks them up before David can kill George.  He throws George back in his cell. David attacks Killian for stopping him. Killian tells him that everything will be okay. David breaks down. He feels powerless to help Emma.  He doesn’t know how to break the curse on Snow and him.  David admits that he misses Snow a lot.  All he can do is tell David that everything will be okay.

Later, David is alone on the pier thinking about his father. Killian finds him to make sure he is okay. David apologizes to Killian.  He recognizes that Killian has changed and is a noble man. Killian takes the opportunity to ask David for permission to marry Emma. David says yes.

Regina tells Snow that she kissed new Robin and it just wasn’t the same.  While they are talking, new Robin breaks into Regina’s mausoleum and steals a heart. 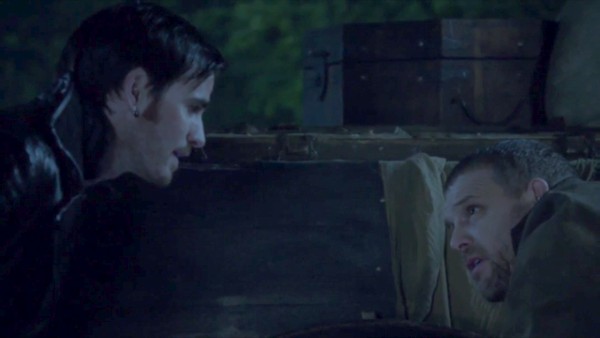 Flashback…Robert is tied to a wheel on a cart. Two of George’s guards are dividing up the King’s gold. They pour alcohol on Robert to make it look like Robert was drunk and crashed the cart.  They are interrupted and killed by a pirate by the name of Hook.  Robert thinks he has been saved.  Hook says he cannot leave any witnesses behind.  He stabs Robert and leaves him to die.

August asks Killian to give pages from the storybook to David.  Killian looks at the pages and realizes, he’s the one who killed David’s father.

We’re bouncing back and forth between the big story about Emma vs. Gideon, David’s past, Regina trying to rekindle her love live, and what ever happened to Aladdin and Jasmine?

So much is going on that I’m starting to wonder if any of it will really end well.

Of course the new Robin is not going to be the same Robin that Regina fell in love with. As a matter of fact, he’s gonna be worse.

David will find out that Hook killed his father and that will stop any future plans Hook and Emma had together.

I’m predicting that Belle will find a way for to work with Snow and David to save both Emma and Gideon.  Gold will threaten that alliance, but it will all work out in the end.

I hope to see Aladdin and Jasmine again.  Is Agrabah the land that Gideon grew up in?

Now that we know that Once Upon A Time will return for season seven, I hope the writers can fix some of the predictable behavior of our heroes. Maybe give Henry a chance to grow.  They really need to focus on some of the untold stories.  What was the point of transporting them to Storybrook if we weren’t going to see them.

This thing between David and Hook is the most exciting thing that has happened this half of the season.  I’m not sure what to expect, but tying up loose ends just seems to create more problems for our heroes.