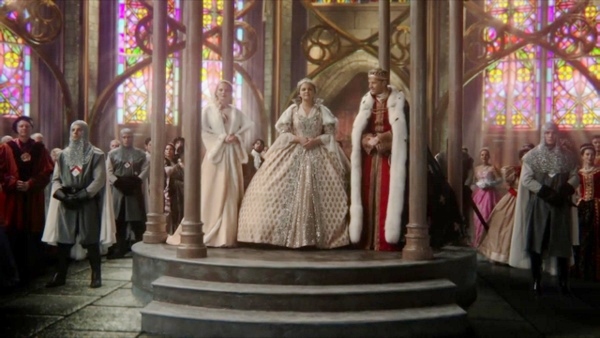 Make a Wish.  Aladdin put on the genie cuffs to help Jasmine find Agrabah.  That decision could be a solution for the Evil Queen. 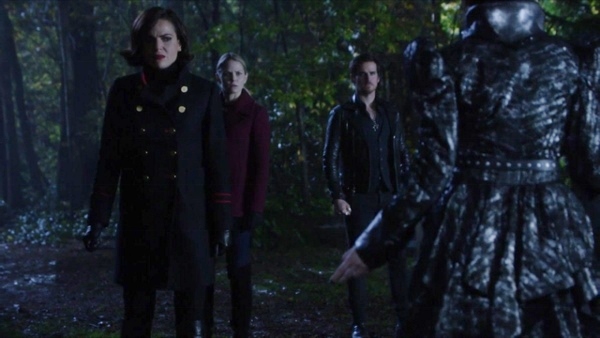 This angers Regina and she attempts to throw a fireball at the Evil Queen.   The Queen stops her reminding her that if Regina hurts the Evil Queen then she will also hurt herself. The Queen gloats about how Regina’s friends can’t hurt her either because then they would hurt Regina. She says love is a weakness.

The Queen tells Emma to say hello to Sleeping Beauty or Sleeping Daddy.  Emma swings the  villain’s sword at her and cuts the Queen’s cheek.  Emma looks at Regina to apologize. Regina is fine though. Emma figures out that she can use the villain’s sword to kill the Evil queen and the Queen disappears. 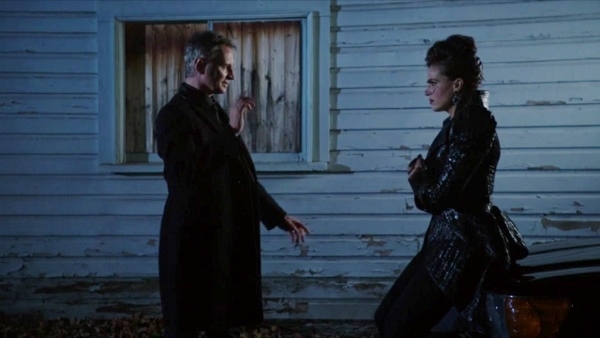 The Queen retreats to an ally.  Mr. Gold/ Rumpelstiltskin (Robert Carlyle) has no sympathy for the Queen. He observes that the Savior has a new weapon that she stole from him.  He says he will let this one go, so he can concentrate on finding his son. And the Queen can prepare to die. He puts a locator bracelet on her.  He says that what she did to him and Belle was unforgivable.  And if the Savior doesn’t kill her, he will.

Our heroes reconvene at the Charming’s. Emma decides that she is going to go after the Queen despite Henry’s (Jared Gilmore) objections.  He tells her that this battle could be the battle that kills her.  She says she can’t back down from a fight because it might be her last. She is the savior. He reminds Emma that she is his mother too.  Henry is upset with her.

Emma, Hook and David (Josh Dallas) are given a report that the Queen was seen downtown.  They hear someone screaming for help from Granny’s.   It’s Princess Jasmine (Karen David). The Queen has her tied up.  She also has the lamp. The Queen rubs the lamp in Aladdin (Deniz Akdeniz) appears.   It is Aladdin’s job to grant the evil queen three wishes, but like magic, wishes have consequences. 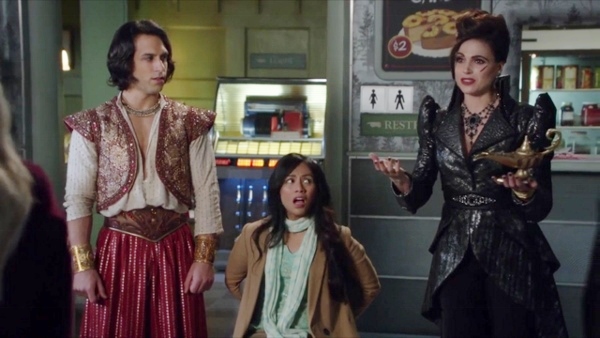 The Queen’s first wish is to give Emma her wish that she had never become the savior.   Aladdin has to grant the wish and Emma disappears.

Hook and David call Regina and Henry and the four of them argue about who’s fault it is that Emma has disappeared.  Jasmine reminds them that they must work together in order to find Emma. Regina goes to find the Queen and the lamp. 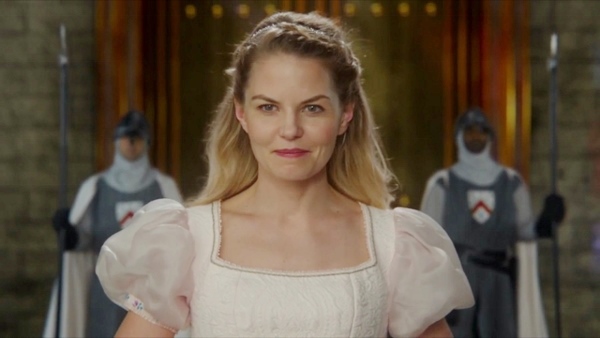 Emma is transported back in time…sort of.  She is the princess of the kingdom.  Snow and David raised her and have even aged.  Henry is also in this world, ready to be knighted.  This is what Emma’s life would have been like if the Evil Queen hadn’t cursed her to be the savior.

Emma still has the villain’s sword.  She gives it to Henry for his knighthood ceremony.  She tells her parents of her strange dreams where she is a savior in a land called Storybrook. 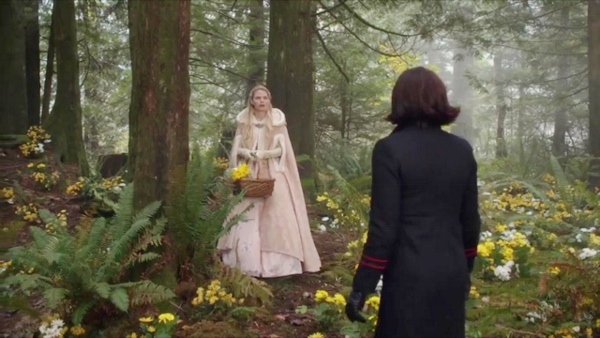 She goes to a cave and finds Rumpelstiltskin (Robert Carlyle) in a jail cell. He tells her the only way to break Emma spell is to remind her that she is the savior. The original story began when Emma was prophesied to become the Savior. There’s no way to get back to Storybrook without his help. He tells Regina that he has a magic bean. He will give to her but the cost is she has to free him. Regina agrees to the deal. Rumpelstiltskin promises to meet her the next day to give her the magic bean.  Rumple also tells Regina that she does not incite fear with the way she looks he encourages her to look like the evil queen and to do everything she can act like the evil queen. 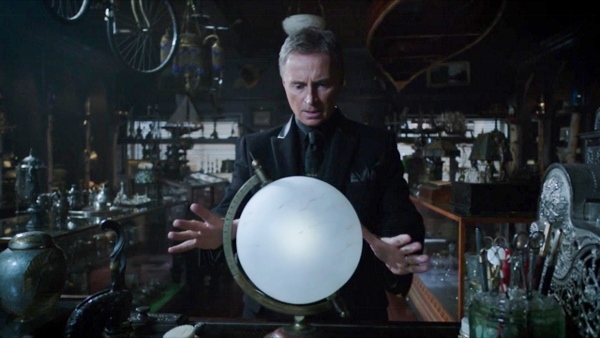 Gold tries to do a locator spell to find his son. He can’t get it to work and that worries him. Gold finds Belle (Emilie De Ravin) to tell her that something is wrong. He tells her about the locator spell.   He thinks he’s in trouble.  Gold removes Belle’s locator bracelet to gain some trust from Belle. Belle calls the convent to check on the baby.  Something has happened to Mother Superior, the Blue fairy (Keegan Connor Tracy).  Blue is in the infirmary.  Blue tells Belle and Gold that she fought hard for their son, but he was taken anyway.  The Black Fairy took their son. 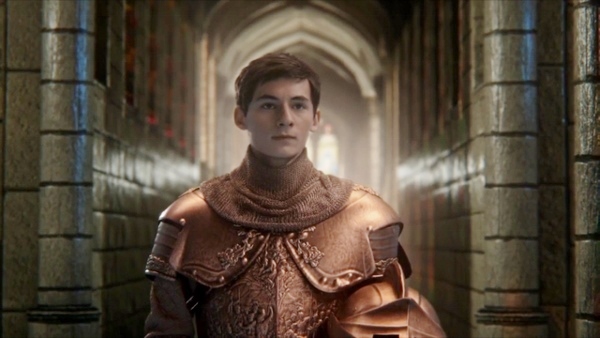 In the Enchanted Forest…

The Kingdom has gathered for Henry’s knighthood ceremony. Snow White is about to declare him Sir Henry. Regina shows up as the Evil Queen and stops everything.  Regina freezes Snow and David.  She vows to put an end to their happiness unless they find a hero who can stop her. She directs her glare at Emma and tells her to find that hero and then she will know where to find her parents. Regina disappears with the Charmings.  Henry runs to his mother to ask what they need to do. 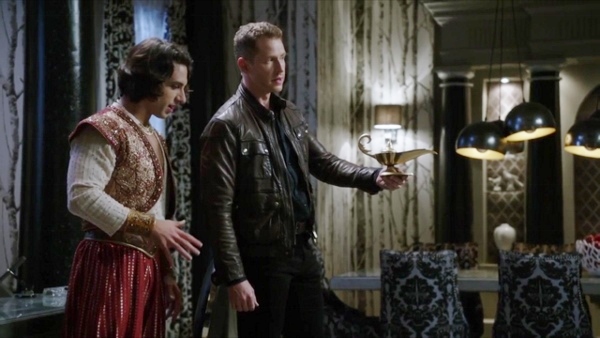 Hook and Jasmine are waiting for David so they can try to come up with another way to find Emma.  David has gone to the mayor’s office to confront the Evil Queen.  He picks up the lamp and summons Aladdin.  David wishes for the Evil Queen to get what she deserves. Nothing happens.   The Evil Queen explains that she already has everything she wanted. She wanted to destroy the Charming family.  David tries to lunge at her with his sword but she stops him.  Hook and Henry arrive and they stop her from killing David.   Before she leaves she reminds David that he is all alone. She has accomplished her goals and has finally won. 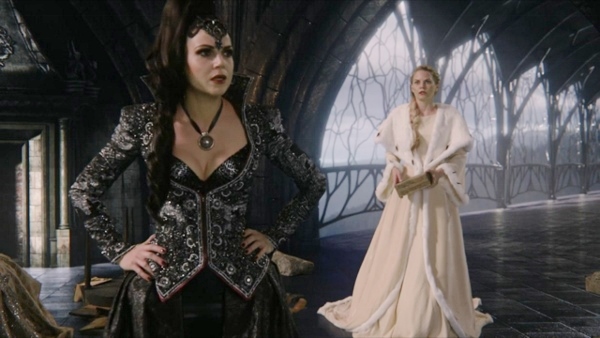 Back in the Enchanted Forest…

Regina has the Charmings at her castle. Emma arrives to save them by offering the evil queen the key to the kingdom.  Since Emma was never the Savior, she never learned how to fight.  Henry arrives in offers to kill the evil queen. He has the villain’s sword and he throws it at Regina.   Emma stops time and saves Regina.   Emma remembers. She stopped Henry from killing Regina because she didn’t want him to have darkness in his heart.  Regina tell Emma that she didn’t really kill her parents.  No one in that world is real. 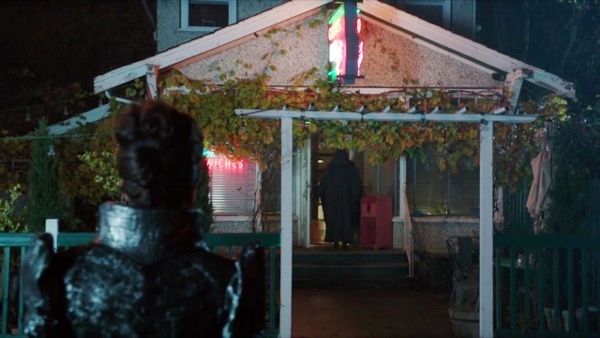 The Evil Queen is walking down the street when she sees a flash come from Granny’s.  A dark hooded figure steps out of the restaurant. The Evil Queen asks who it is. The dark figure pushes her back and then turns her into a cobra snake. She got what she deserved.

Aladdin and Jasmine leave for Agrabah.  Aladdin promises to return. Grumpy (Lee Arenberg) takes the snake to David and Hook.  He tells them about the hooded figure.  It’s the hooded figure from Emma’s vision.  They ask who it was. 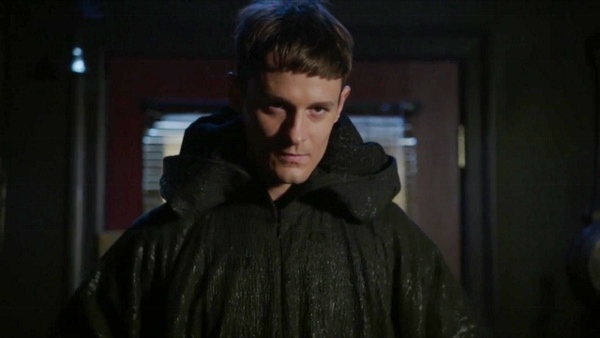 Belle and Gold are in his shop talking about how to find their son.  Gold says the Black Fairy is in a place where time doesn’t make sense. It is a place of darkness.  Belle is worried about their son.  They are interrupted when a dark figure walks into the shop.  He takes off his hood and it’s their son, Gideon (Giles Matthey).

Regina and Emma meet Rumpelstiltskin to get the magic bean the opens the portal back to Storybrook. An arrow is shot at them before they can jump.  It’s Robin Hood and he’s there to rob them.  Regina stares at him.  Emma tries to get Regina’s attention. The portal closes before either of them can jump. 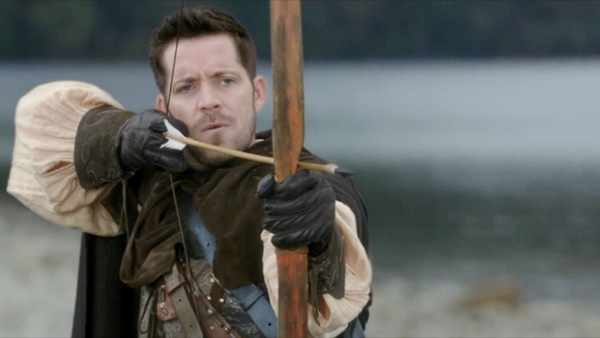 This was the winter finale.  Regina is truly good.  And now she has a chance to be with Robin again.  But!  She also missed her chance to go home! And she knows the people in that world are not real.  Someone or something is messing with her. -_-

I was shocked that Gideon ended up being the villain.  So that puts Belle and Gold against the Charmings and Hook.   While Emma and Regina are gone, what will Gideon do?  Can Belle make him good? Or will he be more evil than his father?

We’ll find out when Once Upon A Time returns in the spring!