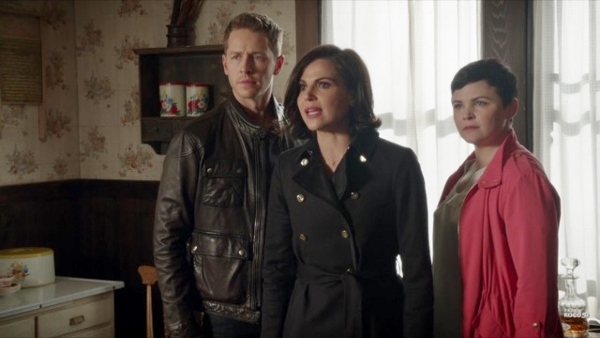 Once Upon A Time, Hook was a bad guy and he is still learning his lesson. Emma reaches out to Aladdin. And the Evil Queen continues to make trouble.

There’s so much going on….

First things first…Save Archie (Raphael Sbarge) who is still a cricket.  David and Snow Regina (Lana Parrilla) distracts The Evil Queen (Lana Parrilla) and Zelena (Rebecca Mader) as Snow (Ginnifer Goodwin) and David (Josh Dallas) rescue Archie . During the rescue, Zelena’s daughter Robin, starts to cry, giving up Snow and David.  The Evil Queen confronts them and they remind her that there’s nothing she can do to break up their family. 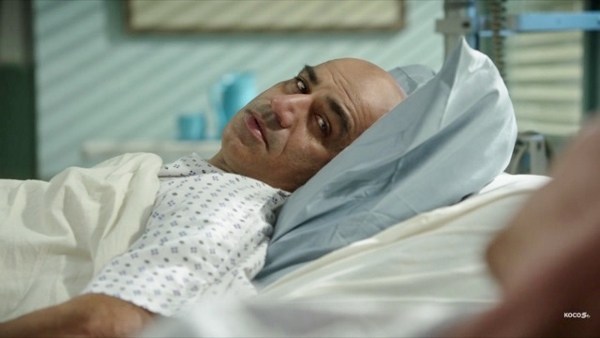 A new Untold Stories character has been found, but he’s hurt.  David helps him get to the hospital. Snow meets him there and runs into Belle (Emilie De Ravin). Belle is getting her first ultrasound but she is far from excited. She is thinking about Gold (Robert Carlyle).  Belle hasn’t forgiven him and she hasn’t decided if he will have any part in the baby’s life.  Belle says she doesn’t know if Gold can ever do anything to repair their relationship.  She is concerned because in their dream, their son looked at Gold with hatred.  Belle hopes that things can turn out differently for Gold and their son, so she shares the ultrasound pictures with Gold. 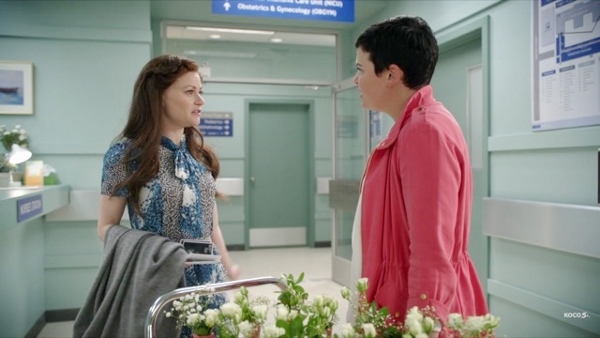 Aladdin (Deniz Akdeniz) and Jasmine (Karen David) are reaquainted and Aladdin likes Storybrooke a lot.  Jasmine reminds him that she needs him to save Agrabah.  Aladdin told her that he is no longer the savior. She insists that Agrabah still needs him and he runs away from her.

Jasmine calls Emma for help to find Aladdin.  Emma finds him breaking into a car. She doesn’t arrest him, but tells him about how many times she ran away.  And now when she thinks of her family having to watch her die, she still wants to run away.  Running away doesn’t solve anything, it can make things worse. That’s why she decided to not use the shears. 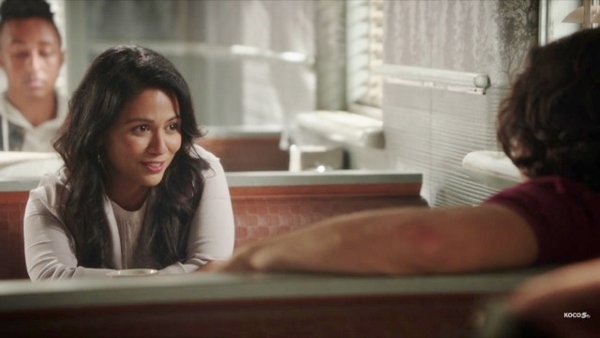 Aladdin asks what he should do.  Emma tells him to go back to make up for his mistakes.  He believes that the reason Agrabah fell is because of him.  He doesn’t even really know what happened to Agrabah. Emma tells him to find out. 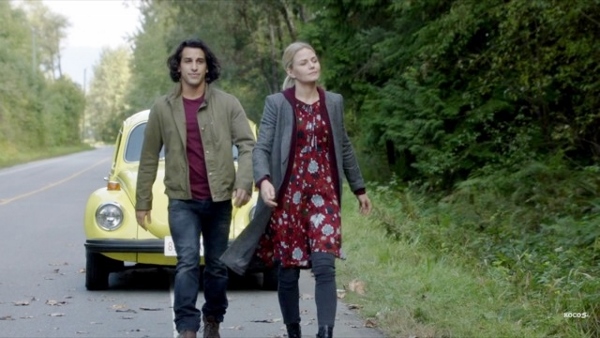 Aladdin finds Jasmine and apologizes for running away.  He’s ready to fix things, even though he’s not the savior.  He’s ready to go back to Agrabah, but Jasmine tells him that Agrabah is gone.  When he fled, she went to a neighboring kingdom for help. When she returned, Agrabah had disappeared.

Hook (Colin O’Donoghue) has the shears that would cut Emma (Jennifer Morrison) off from her Savior destiny.  He hides them in the shed, but The Evil Queen reveals them to Henry (Jared Gilmore).  She tells Henry that Hook doesn’t care about Emma or the family.  Henry takes the shears but before he can get rid of them, Hook stops him.  They are approached by two men and  taken prisoner on the Nautilus.

Henry lays into Hook for taking the shears.  He tells Hook that being the Savior is who Emma is and the reason that Henry and Emma reunited.  Hook was only thinking of himself when he took the shears.  Henry is also upset with Hook because they were taken prisoner by the men on the submarine.  Hook knows these people.  He’s been on the Nautilus before.

Flashback to when Hook was seeking his revenge on Rumplestiltskin.  He was taken captive by Captain Nemo (Faran Tahir) and his first mate (Nick Eversman). Nemo says he’s giving Hook a second chance. Revenge is not necessary.  Nemo wants to give him a family.  He also needs Hook’s help on a mission. 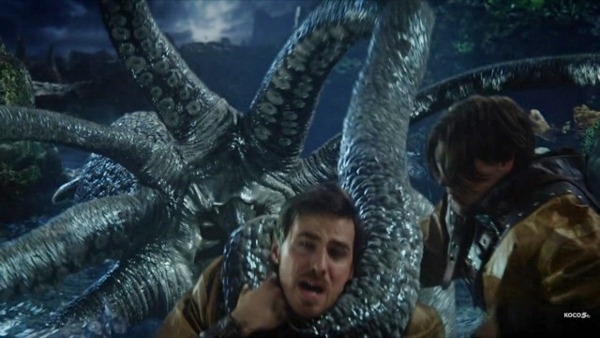 Nemo, Hook and the first mate are on the mission to find a treasure chest.  The first mate tells Hook that his family was taken from him.  He had to live by the docks and fend for himself.  He never found the person responsible, but Nemo save his life and he would give that life for him.

They find a treasure chest. Before they can open it, a krachen grabs Hook.  The first mate tries to save Hook.  Nemo throws a spear at it and it goes away. They take the chest back to the ship and there is a key to the Land of Untold Stories.  Nemo asks Hook to join his crew, but Hook hesitates when he realizes who the first mate really is.

Hook admits to Henry that he killed his father.  He says he once had a chance of having his own family. His father had a younger son…his brother, Liam.  He says he left the boy as an orphan.  Hook tells Henry that he cannot ruin another family.  They’re trapped on the Nautilus and it’s Hook’s fault. 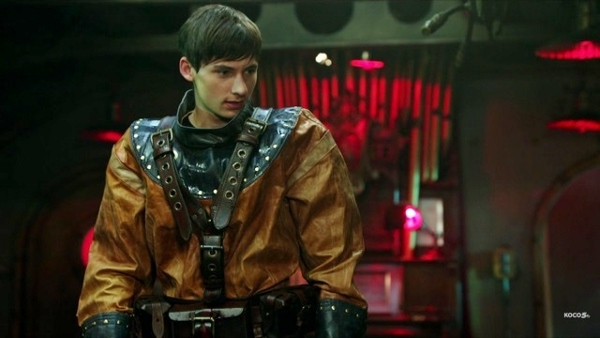 Henry won’t give up though.  He uses the shear to unlock the door.  They prepare Henry to leave, but  Hook isn’t going with him..  He says he is saving Henry for Emma.  And Hook will face his fate.  Liam finally shows up and he’s ready to kill Hook.

Flashback Nemo tries to convince Hook to stay and face Liam.  Nemo reveals that Liam is Hooks younger brother.  Hook is also the man who killed their father, leaving Liam an orphan.  Liam overhears them and goes after Hook.  Nemo steps in the way and is stabbed by Liam.  Liam blames Hook for Nemo’s injury and  Hook leaves. 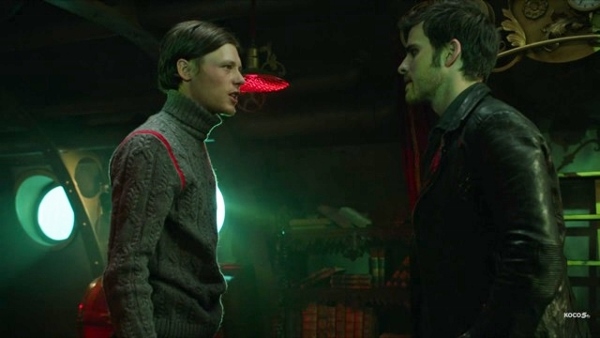 Back in the present day, Liam tells Hook that Hyde took Nemo to the Land of Untold Stories.  He says that Nemo is probably dead and attacks Hook.  Hook won’t fight back.  Henry stops Liam from killing Hook and Hook knocks him out.  Hook says he needs those shears because he loves Emma, but he won’t use him if Henry doesn’t want him to.  Hook vows to find another way to save Emma.  They put the shears in the treasure chest and throw it in the sea.

Hook takes Liam to the hospital. Hook asked him why Liam stopped when he saw Henry.  Liam said that he realized if he killed Hook in front of Henry, he would be leaving another boy with heart full of hate.  He wishes Nemo could see that he made peace with Hook.  At that moment, Nemo is rolled into the room with Liam. Hook leaves them alone to meet Emma and Henry. 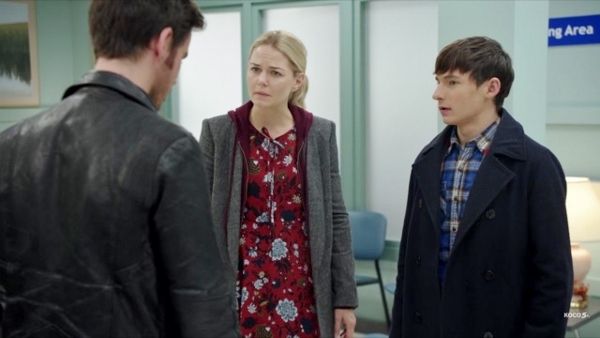 Gold pays a visit to the Evil Queen and tells her he wants the Shears of Destiny.  The shears will work on the Dark One as well as the Savior.  The Evil Queen doesn’t know where they are.  Later she tells him that she forgot the lesson he taught her to go after what she wants. The Evil Queen hands him the shears as payment.  She wants him to help her get Snow White’s heart. 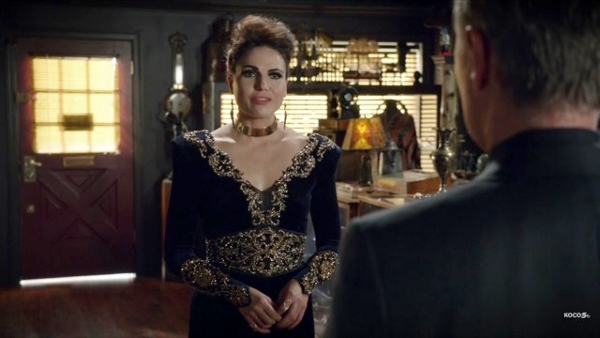 Well, kind of a slow episode.  I get that they are trying to redeem Hook and have him learn a lesson about keeping secrets, but the only thing that came out of this episode was the fact that the shears will work for Gold as well as Emma.  And of course, the Evil Queen gives them to him.

The Evil Queen is by far the best part of this season. Her scenes with Gold make me cringe, but she has to have equal.  It’s all about the power. Gold is powerful and it’s attractive to her.  The Evil Queen is my favorite.  She funny, charismatic and dresses like Elvira.  I hope she sticks around for a while.

I really hope we get to see Aladdin and Jasmine find Agrabah. Something tells me they will find Jafar and will need the Charming gang’s help to defeat him.  Aladdin’s character hasn’t changed much. He’s still a street rat.  I hope they make him the hero that I loved in the movies.  I know, I know…it’s never just like the movies.

Our heroes have been honest and upfront with each other…with the exception of  David. What is his secret? When we will find out? When will Snow find out?

Next week, it looks like the Evil Queen is ready to make a major move.  I wonder what that substance in the bottle is?  And what exactly it will do to our heroes if it is opened?  What will happen if it’s not opened?  Hmmmm…..