ONCE UPON A TIME Recap (S06E19) The Black Fairy 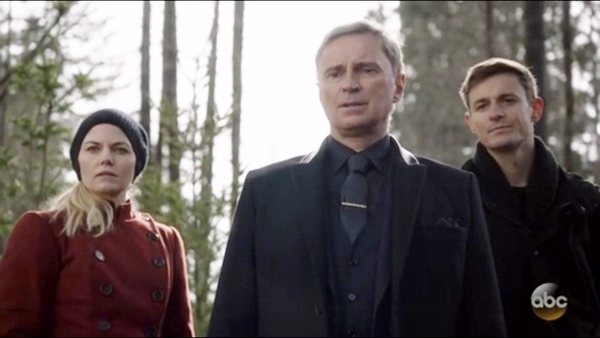 Once Upon a Time, a young mother turned to dark magic to save the life of her son.  Nothing is ever as it seems…we should know this by now.

Last week, The Black Fairy attempted to use Zelena’s power to increase her own.  Snow was eager to start planning Emma’s wedding. David and Emma agreed to postpone the wedding until the Black Fairy is dealt with.

Read last week’s full recap of Once Upon a Time, “Where Bluebirds Fly”

Rumpelstiltskin was literally born in the darkness.  Two fairies arrive to inform his parents, Fiona (Jaime Murray) and Malcolm (Stephen Lord), that her son is special.  Tiger Lily (Sara Tomko) is his fairy godmother.  And he is destined to become the Savior.

Rumpelstiltskin (Robert Carlyle) is trying everything to wake up Blue.  She stirs at the smell of dragon’s breath, but does not wake up. Rumpel is frustrated and takes a break.  Belle (Emilie De Ravin) tries to calm him down.  He’s worried about Gideon (Giles Matthey).  He’s afraid that their family’s fate is cursed.  Emma (Jennifer Morrison) tells them to get back inside.

Blue’s eyes are open.  Snow (Ginnifer Goodwin) sits by her.  Hook (Colin O’Donoghue) interrupts and asks where the rest of the Fairy Wand is.  Blue answers that it is at the center of Storybrooke. 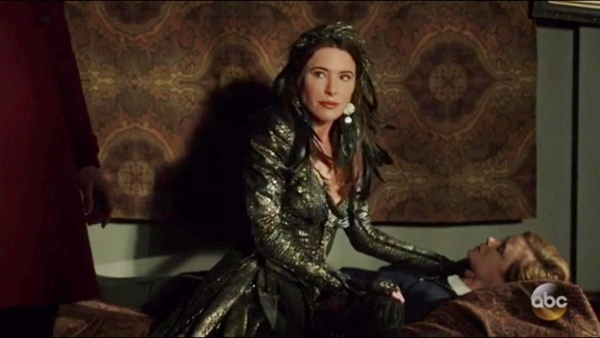 Snow tells her to relax and not to give away all of her secrets.  Snow puts her hand around Blue’s neck.  Emma questions her motives. Snow turns into the Black Fairy. She tells them to back off. David (Josh Dallas) tells them to listen to her.  He transforms into Gideon.

The Black Fairy takes Blue. Gideon starts to leave.  Rumpel catches his arm and puts a cuff on him that inhibits his power.  Rumpel says it’s time to get Gideon’s heart back.

Zelena (Rebecca Mader) is adjusting to life without magic.  Regina (Lana Parrilla) tells her it will get easier.  Zelena hates that she doesn’t have the ability to protect her daughter.  Regina has an idea of how Zelena can best protect them both.

Rumpel and Belle tie up Gideon.  He can’t tell them where his heart it is.  The Black Fairy put a spell on Gideon.  He feels pain when he tries to defy her.  Rumpel has an idea of how to find Gideon’s heart.  He uses Sands of Morpheus to go into Gideon’s dream realm. It’s the only place where he can talk to Gideon without the Black Fairy knowing about it.  He takes Emma with him to keep her from going after the Black Fairy. 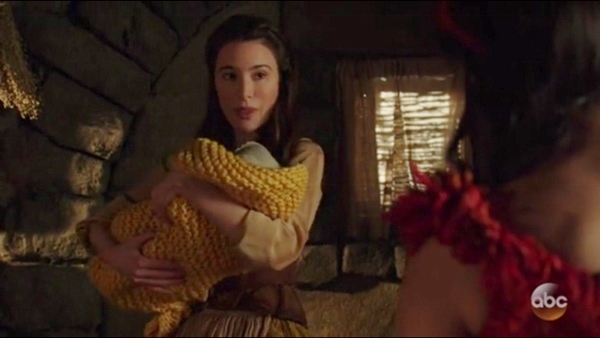 Fiona is freaking out about her son’s fate.  She has read everything about the Savior and learns that he will be killed by an evil bearing a crescent moon scar. This evil is said to have been born the same winter as her son.  Fiona sets out to find a child with a crescent moon scar.

Tiger Lily tries to assure her that she will protect the boy.  Fiona appears to calm down and even lets Tiger Lily hold her baby. Fiona takes Tiger Lily’s wand and transforms herself into a fairy.

They look at every child born that winter and cannot find the evil one. Fiona says she found two spells that she needs to put together. She asks Tiger Lily to get her into the Fairy vault to get the ingredients.

Regina decides it’s time for Zelena to learn how to drive.  She wants Zelena to have a way out when the Final Battle happens. That’s the best way she knows how to keep Robin and Henry safe.  She asks Zelena to take Henry with her.

Regina gets a call from Snow. She and David are trying to find the rest of the Fairy Wand.  They are at the clock tower and can’t find anything.  Regina says that when fairies talk about the center, they mean the heart. The heart of Storybrooke…Granny’s.

Emma and Rumpel look for Gideon. They figure out that they are in Rumpel’s dream, not Gideon’s.  Rumpel doesn’t want to deal with what’s in his dreams.  He wants to find Gideon so he can talk to him.  Emma asks if he will be on her side when she faces the Black Fairy. He says his mother never loved him. She never gave him a name. He says he will be happy when Emma defeats her.

Gideon finds them.  He’s very different in the dream realm. He thanks Rumpel for fighting for him.  Rumpel is very emotional and eager to find Gideon’s heart.  Gideon tells Rumpel that the Black Fairy is afraid for him to learn her darkest secret.  Gideon says he thinks all of Rumpel’s answers are in the dream realm.  He just has to face them.

Snow, David, and Hook meet Regina at Granny’s. They search everywhere for the wand. Hook and David move the jukebox and find a box under the floorboard.  The Wand is in the box.  Hook refuses to hand over the other half of the wand.  He wants proof that she’s not the Black Fairy. 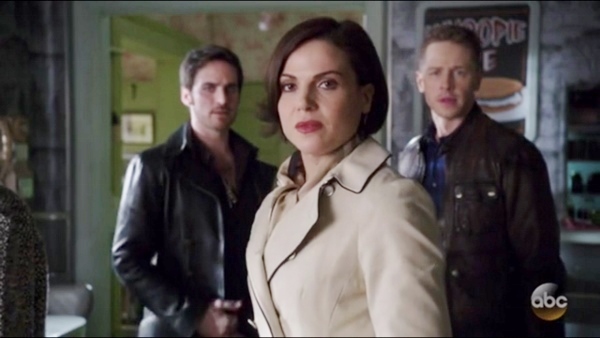 The Black Fairy appears and tells them the wand won’t do them any good without the Savior around. She demands they give it to her.  Regina tells her that she will have to fight for it.

Emma encourages Rumpel to face his fears and find out his mother’s secret.  Gideon backs her up. The three of them are transported to the Fairy Vault.  They see Fiona making her spell to protect her son.  Tiger Lily sees that it is a dark curse that will banish every child.  Fiona says it’s the only way to be sure that her son is safe.  Tiger Lily says it is his fate to die so that every child may live. That is the fate of the Savior. 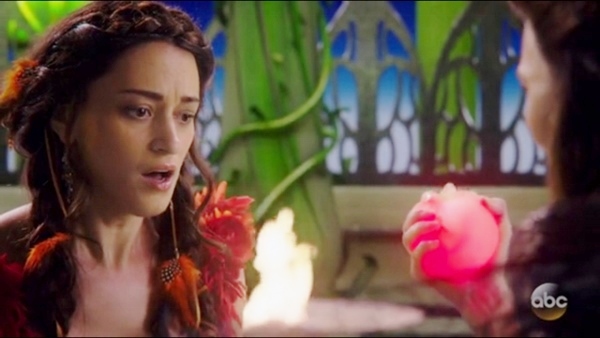 Fiona won’t let that happen. She takes Tiger Lily’s heart and transforms into the Black Fairy.  Tiger Lily sees a scar on Fiona’s wrist in the shape of a crescent moon.  Fiona is the great evil. Fiona and her son are destined to destroy each other.

Rumpel wakes himself up.  Belle and Regina are waiting for them.  She give the wand to Emma.  Emma gives it to Rumpel. They tell Bella and Regina that Rumpel is a Savior.  He mends the wand and goes after the Black Fairy.

They meet by the lake.  Rumpel believes that his mother left so he wouldn’t kill her.  The Black Fairy shows him what happened after she turned dark.

In the Fairy Vault,

Blue shows up and gives Tiger Lily her heart back.  Tiger Lily tries to break Fiona’s destiny by giving her the Shears of Destiny.  The Black Fairy says she won’t sacrifice her power.  She can still save her son. She tells them she can sever his destiny and keep her power to protect him. 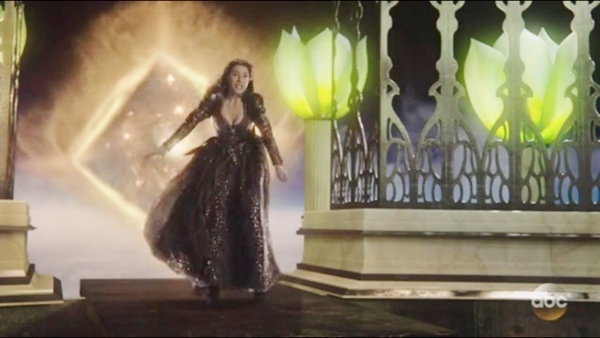 Blue tries to stop her. The boy is destined to be a great hero.  Fiona cuts his destiny saying she needs the power.  Blue banishes Fiona. Fiona makes a promise to find her way back to her son.

Villains like them that the world a vile place.  Rumpel realizes that he is just like his mother. He became the Dark One to save Baelfire.   He tried to cut Gideon from his fate.  Rumpel understands her reasons for what she did to him.

Blue and Tiger Lily take the baby to his father, Malcolm. Malcolm is overwhelmed with grief from losing Fiona. He blames the child and names him Rumpelstiltskin. 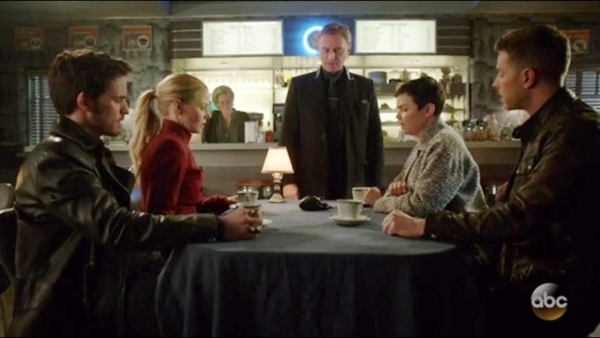 Rumble gives Emma a black heart. He says the Black Fairy is banished for good.  Blue is safe.  Now they can have their wedding the next day.

Rumpel gives Gideon his heart back.  Gideon is home with his parents for good.  Rumpel promises Belle and Gideon that everything he does is to keep them safe.

Hook catches Henry coming home. He asks Henry to be his best man. Henry gladly accepts. Emma catches them in the moment.  Henry says goodnight and Hook leaves.  It’s bad luck to see the bride before the wedding.

At the docks, Rumpelstiltskin meets the Black Fairy. He lied about banishing her.  Belle and Gideon are safe and have no idea of what’s going to happen.  The Black Fairy intends on killing Emma the next day.