Once Upon A Time Recap (S06E16) Mother’s Little Helper 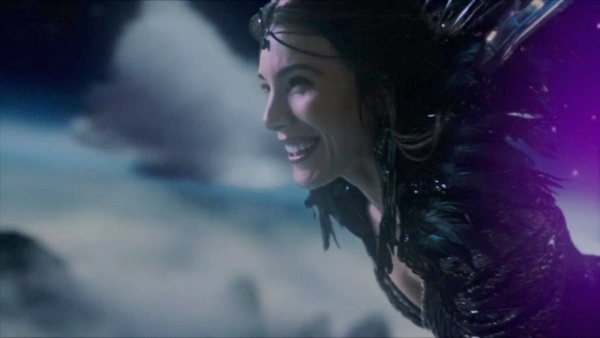 Once Upon A Time, The Black Fairy tortured a young boy named Gideon.  Gideon grew up to hate the Black Fairy.  He traveled to Storybrooke to find the Savior.  Together they would stop the Black Fairy and save the people of her realm.

That’s what should have happened.

The Black Fairy (Jaime Murray) took baby Gideon (Gils Matthey) from his fairy Godmother, The Blue Fairy (Keegan Connor Tracy).  Gideon is the son of Mr. Gold aka Rumpelstiltskin (Robert Carlyle) and Belle (Emilie De Ravin).  The Black Fairy is Gideon’s grandmother as well.  He grew up in a place where time moves differently.

RELATED: Listen to Merrin Dungey talk Once Upon a Time, Alias, Big Little Lies and her childhood obsession with television on Kneel Before Aud

Gideon and other children were tortured by the Black Fairy.  In flashbacks, Gideon thinks that his real mother was a hero. So that means he is one too, right?  He tries to stand up to the Black Fairy.  She says that he will never be a hero. To prove her point, she takes his friend from his cell.  She leaves Gideon’s cell door open, but Gideon doesn’t go through to save his friend.

Gideon sought out and found the Savior, Emma Swan (Jennifer Morrison) weeks ago.  His original plan was to kill The Savior and take her power. That didn’t work out. His new plan is to blackmail Emma.  Gideon sent Hook (Colin O’Donoghue) to another realm. The only way to get Hook back is for Emma to help Gideon.

Mr. Gold describes his mother as pure evil.  He tells Emma and Snow White (Ginnifer Goodwin) the Black Fairy is where all darkness comes from.  Emma is reluctant to help Gideon.  He’s been a big headache since he arrived.  After talking to Belle and Gold, Emma decides to help Gideon in his quest.

Gideon and Emma go to the Sorcerer’s House to open a portal.  The Black Fairy is already aware of they are up to. She send a huge spider through the portal to stop them. They have to run and hide from the spider. Gideon tells Emma that only her magic is strong enough to get into the Black Fairy’s realm.  He planned to jump and kill the Black Fairy after Emma opened it up to Storybrooke. (Hmmmmm…)   Emma asks why Gideon didn’t just ask. He quickly responds that he wanted to take the magic for himself.  He apologizes and tells her that she should just walk away. 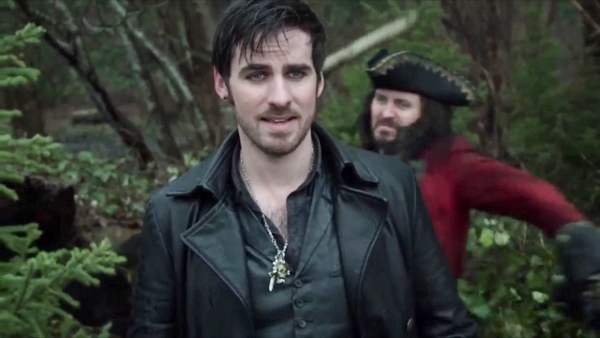 Hook finds Blackbeard (Charles Mesure) and has to play a game of cards with the old pirate. If Hook wins, Blackbeard has to give Hook a magic bean to get back to Storybrooke.  If Blackbeard wins, he gets the Jolly Roger…seems fair.

Hook and Blackbeard end up in Neverland and the Lost Boys begin to chase them.  They run to a boat on the beach.  Pan is dead. Hook knows who is leading the Lost Boys and says it’s the worst of them all.

Blackbeard hits Hook on the head and runs to the boat. Hook stumbles and Blackbeard gets away.  Hook can’t chase him. The Lost Boys have caught up to him and he must flee. 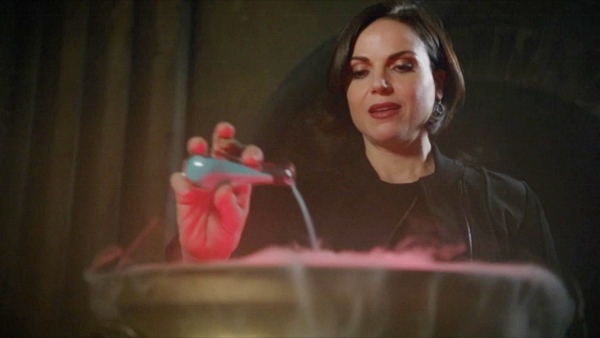 Regina (Lana Parrilla) works on reversing the sleeping spell put on David Charming (Josh Dallas) and Snow.  She asks Henry (Jared Gilmore) to help her get some ingredients from Emma’s shed.  Henry starts making a list and is put in a trance that makes him write in symbols.

Henry wakes up and is confused about what he was writing.  Regina knows someone who can help Henry.  They visit Isaac Heller (Patrick Fischler), the previous author about what’s happening to Henry.  Isaac looks at the symbols that Henry wrote. He says he can think better if he were released…and given a car…to go back to New York…and Hamilton tickets.

Regina and Henry leave. Isaac says that Henry’s author powers are taking over.  Henry doesn’t control his powers.  The trances will become more frequent and intense.  Isaac won’t help until Regina gives him what he wants.

When Gideon grows up, it’s is obvious that he’s on board with the Dark Fairy. He even does her bidding to find the person who stole her key.  He finds his childhood friend, who he thought was dead.  The friend admits to taking the key.  He tells Gideon that he has a choice and appeals to the goodness in Gideon. He tells Gideon to be a hero and help him defeat the black fairy.

Roger tells Gideon the real reason that the Black Fairy is gathering black fairy dust for a dark curse.  He wants to stop her from using it.  Gideon asks what happened to him after the Black Fairy took him. Roger says it’s better left unsaid.   Gideon says he regrets not helping his friend.

Roger tells Gideon that he has another chance to be a hero. He tells Gideon about the Savior.  They need the Savior to destroy the Black Fairy.  There is an orb that can help them communicate with the Savior.

At the Sorcerer’s House, 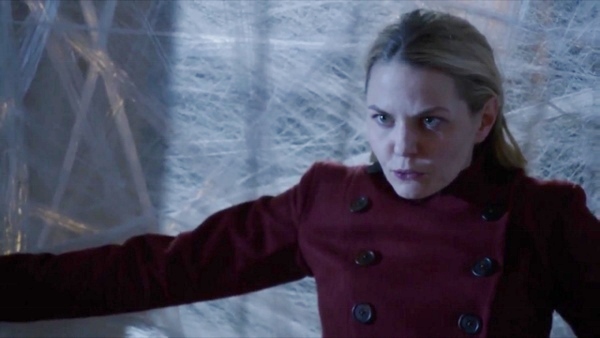 Gideon turns on Emma and knocks her into a spider web.  He takes her sword saying he is going to channel her power to open the realm..  He created the spider and brought it to Storybrooke to kill Emma.  Gideon tells her that Hook can never return to this realm.

Gideon takes the sword to the clock tower and waits for the spider to kill Emma.  The spider wraps Emma in a cocoon and tries to squeeze the life out of her.  The sword begins to glow and Gideon uses it to tear open the realm.

Just as Emma is about to die, Gold arrives and fights off the spider. He releases Emma and the two of them shrink the spider and kill it.  The Savior’s sword backfires on Gideon and knocks him out.

Gold asks where Gideon is.  Emma tells him that Gideon brought the spider.  She says that Gideon cannot be saved because he is evil.

Gideon takes Roger to the orb. They attempt to contact the Savior and the orb explodes.  The Black Fairy shows up. It was a test that Gideon failed.  The Black Fairy turns Roger into a spider and steps on him.  She tells Gideon that he will never be a hero. 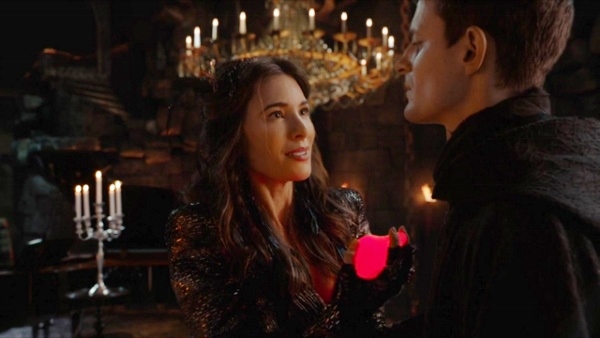 The Black Fairy rips out Gideon’s heart. She tells him that he belongs to her. She is sending Gideon to Storybrooke to find and kill the Savior.  Once the Savior is dead, her sword can open the realm that the Black Fairy is imprisoned in.

Gold and Emma meet up with Belle and Snow.  Emma believes that Gideon is evil and cannot be saved. Gold believes otherwise.   Emma tells them that she will not let Gideon attempt to kill her a third time. She says he has to take responsibility for his actions.  Gold tells her he will do what he must to protect his son.  Snow reminds them that they didn’t start this fight and she leaves with Emma.

Belle is sad that Gideon has caused so much destruction.  She says they’ve lost him.  Gold believes they can save him as long as the Black Fairy is not there.

At the clock tower

Gideon is talking to The Black Fairy, calling her Mother.  He says her plan failed.  The Black Fair disagrees with him.  Gideon turns around and the Black Fairy is standing before him.  She tells him that they have much to do. 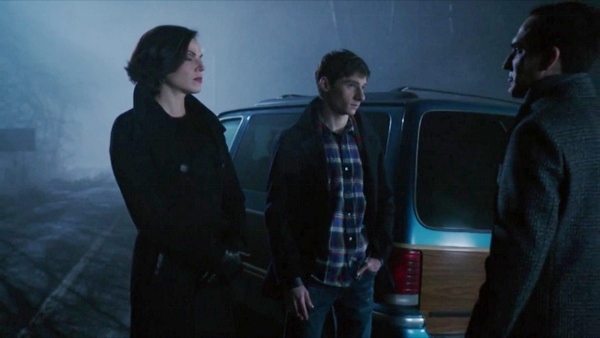 At the town line, Isaac is complaining about the car that Regina got for him.  He says to find out what is happening to Henry, they have to look at the book.  Henry opens the book and the pages he looks are blank.  It’s the final chapter.  Henry asks Isaac what happens in the final chapter.  Isaac says the Savior fights the final battle. And they don’t want to be around to see it.

So Gideon’s change of heart was just too good to be true.  However, knowing that the Black Fairy has his heart and is controlling him makes it a little easier not to hate him…I said a little.

We really should have seen this coming.

Of course Gold and Belle are going to fight for their son…especially Gold. He’s already lost one son, he really can’t lose another. That would be cruel.

And it looks like Henry will get a chance to be more a part of the story as he writes the final chapter.  Let’s hope he can learn to control his powers before that battle begins.

Final thought…Jaime Murray is so awesome as an evil villain.  She just has this look about her that makes you think she is having so much fun being bad…kind of like the evil queen.  I like villains like that!