This year at E3 2017, I had the privilege of being able to meet with developers and participating in hands-on tests of some of Ubisoft’s upcoming games. In this article, I highlight the four games that I tested: Far Cry 5, Skull & Bones, Assassins Creed: Origins, and Mario + Rabbids Kingdom Battle.

The Far Cry series remains widely popular and quite successful. It is no surprise that after the triumph of Far Cry 4, Ubisoft would have another sequel queued up.  Since 2004, the series has consisted of four main games and several side games. The premise of these games is that you are thrown into an open-world wilderness somewhere in the world, that is being controlled by one or more militant groups that you must fight.

However, this is the first Far Cry game to take place in the United States. This has caused a bit of an uproar due to the current political climate in the US, as well as the religious aspect of this fictional militant group in the game. The developer that joined me on my test told me that they were only getting outbursts from people who were not familiar with the series, or did not truly understand what the game was about.

In Far Cry 5, you return to your home town of Hope County, Montana. During your absence, it came under the control of an aggressive apocalyptic cult. Throughout the demo, I was able to run around the rural parts of Hope County, fish, fly an airplane, drive a truck, climb up a water tower, snipe enemies from above, and run around with my awesome dog companion Boomer ALL in 20 minutes.

What stuck out to me immediately remains the environment. The location design along with stunning graphics literally made me feel like I was roaming the wilderness of Montana. From the details of the grass and the trees, to the light reflecting off the water in the adjoining brook, I honestly wanted to explore the landscapes throughout my demo experience.

Additionally, it plays incredibly well too.  Far Cry 5 remained equally challenging and entertaining, as I attempted to take out as many enemies as I could before they all started to descend on me. With the help of Boomer, I stealthily dodged into the nearby shrubbery to catch my breath for a moment (and heal up) before I continued taking out the enemies. Not only does this game control well, but you actually *feel* what you are doing. In particular, while flying the plane, I could feel the kickback from the plane controls. I physically felt like I was flying this plane over the Montana plains, NOT just playing a video game in a small room.

Overall, I’m really looking forward playing more of this game, as well seeing how it fares for players across the world. Far Cry 5 is set to be released on February 27th, 2018. 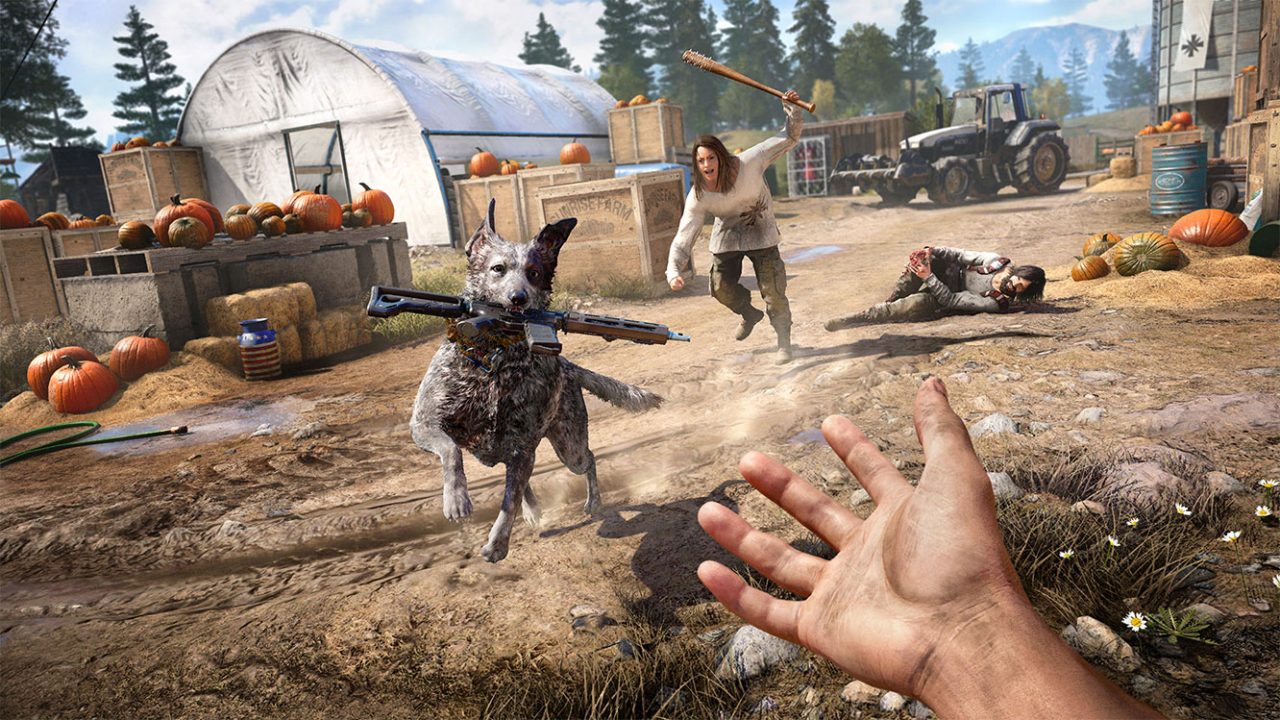 Skull & Bones is that gritty pirate game that you’ve been waiting for. Ubisoft’s Assassins Creed: Black Flag introduced players to a world of piracy and sea-objectives, while balancing traditional landlocked assassination missions. Since then, Ubisoft expanded that ship-sailing system, and developed an entirely new game around it.

In the Multiplayer demo, we could chose from 3 different ships each with significant strengths and weaknesses. You could choose the offensive ship: An easily maneuverable vessel that is great for bashing. The defensive ship: A craft that is difficult to sail, but contains tons of health to withstand a large assault. Or the long range ship: A small ship thats not too strong, but has incredible long range firepower. Using those three types of vessels, we constructed our fleet, and in both matches took down the opposing team.

It’s not just your firepower or strength that is crucial in this game-it’s how you master your vessel. You could have all the loot in the world. But if you’re not sailing with the wind just right, then you’re an open target for enemy vessels and pirate hunters. It’s mechanics like these that make me truly love a game. I love a good challenge and when I have to use my mind to fight. If you’re not paying attention to your map, the winds, and other players, you can lose the match! Pirates were tactical masters and maneuvered methodically. This game capitalizes on those aspects.

There will be more ships and items attained throughout the final game. And Skull and Bones will feature a single-player story mode as well. This game is set to be released in Autumn of 2018. 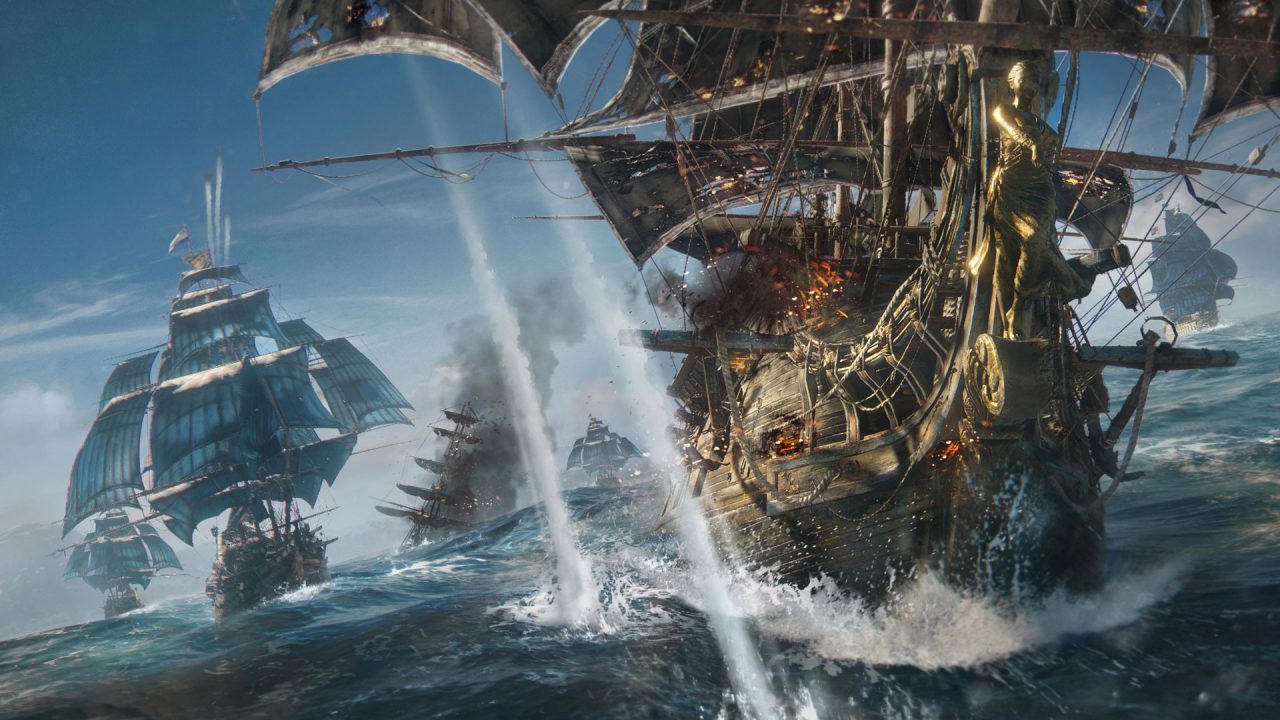 Assassins Creed: Origins contains an assortment of new features that have not appeared in previous games.  In the past, certain map sections would be locked, or separated into different loading areas.  Now we’ve got a fully expansive open world, that features day and night cycles as well. This remains fascinating, because now missions are no longer restricted by time of day or area. Speaking of missions, you can now have two objectives running at the same time. This is something I truly love about the new Assassins Creed game. It no longer feels like I’m being led by the game. Now it feels like I’m crafting my own story in this massive immerse universe.

Another feature I love is that you have your eagle, Senu who assists you. Senu distracts enemies, gathers intel and items, and offers a fresh perspective on the area. Is Senu the source of the eagle imagery in all the Assassins Creed games and lore? Including the special ability, Eagle Vision? Could be!

One additional new element I experienced in my demo is that there is no longer Parry in the combat system. In the previous games, your enemies would give you a “tell” as to what there next attack would be. If you correctly timed it out, you could parry this attack, gain the advantage, and injure your enemies all in one. Now, Parry appears replaced by a standard Block, which turns the combat completely on it’s head.

Finally, during the demo my game designer kept pushing me to engage in warfare with my enemies, instead of being stealthy. This makes me wonder that if in the finished game, there will be more forced combat than in the past. I love being the non-lethal, sneaky assassin, and I hope I’m still able to continue those tactics in this upcoming game. Assassins Creed: Origins is set to be released on October 27th, 2017. 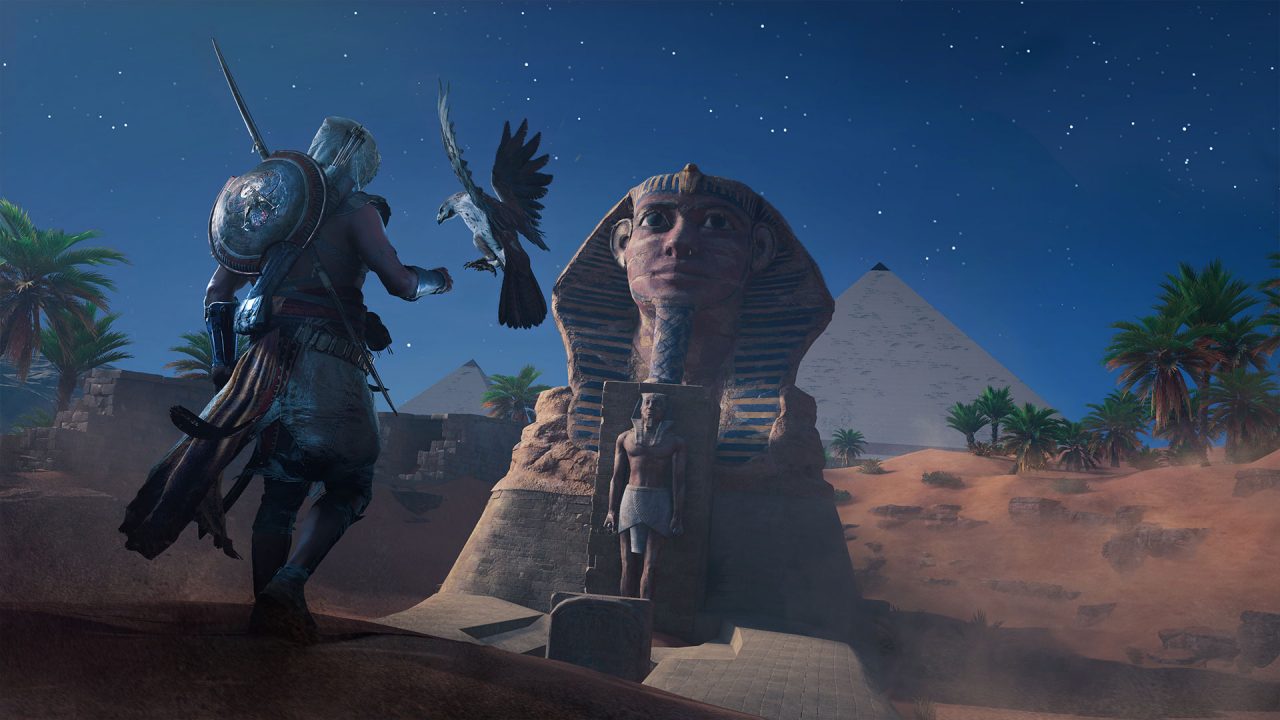 I covered this title in my Nintendo Switch Demos article linked above. This is the game that truly surprised me at E3 2017. The story is something I never expected. The character designs are fun and colorful. And it’s got that classic Mario feel we all love, with a new twist. I could not believe that 20 minutes had gone by when I finished the demo. I simply was having too much fun. Throughout my gameplay, I was never overwhelmed or confused by what to do. And each new level offered the right amount of fresh challenges. If you’re interested in getting into turn-based strategy games, I highly recommend this one. I will definitely have this game in my Nintendo Switch library come August. Mario + Rabbids Kingdom Battle is set to be released on August 29th, 2017.

Ubisoft’s 2017-2018 lineup remains pretty strong. Altogether, I am really impressed by the quality and diversity of gameplay each demo offered. To me, that’s a true depiction of a strong and successful video game company. A company that offers a vast collection of unique games, that appeal to gamers of all types. As I mentioned earlier, Skull & Bones reminded me of the fun of multiplayer games. And Mario + Rabbids Kingdom Battle introduced me to turn-based tactical games for the first time. Overall, I’m looking forward to the releases of Ubisoft’s lineup, and I hope you are as well!

Watch Marvel characters get their dance on in @slayerfestx98's video to "Agatha All Along"!

The #PlayStationStateofPlay closed out with news for #FinalFantasyVIIRemake. We broke down everything announced!

Watch Marvel characters get their dance on in @slayerfestx98's video to "Agatha All Along"!