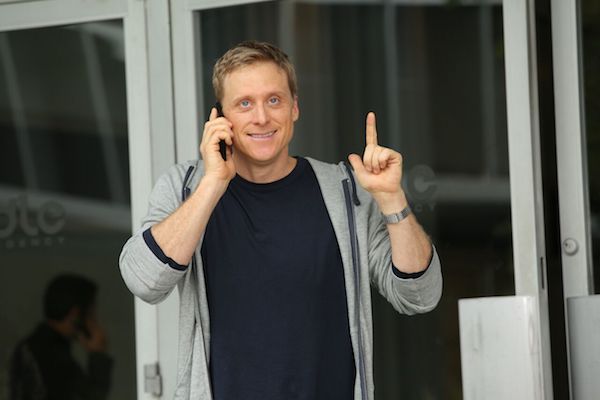 In 2015 Con Man took the brand new world of crowd funding by storm. When actors and Whedon Universe superstars Alan Tudyk and Nathan Fillion announced that they were starting an Indiegogo campaign in order to fund a new television series, fans came out in droves. The proposal for Con Man was a rousing success, ultimately making 735% of it’s initial goal on the crowd funding website.

Comic Con HQ quickly picked up Con Man. Since then, the show’s popularity exploded. Tudyk, who not only stars in the series, but also writes and directs it, has been instrumental in creating the fully fleshed out environment surrounding the series. There is not only a highly addictive, companion smart phone game, but also Spectrum comic books for fans to enjoy.

In the second season premiere, “What Goes Up” we rejoin the action a few months after the events of the first season finale. Wray Nerely is enjoying an under the radar relationship with Faith (Alison Haislip). At the same time, Faith’s boss, Jack Moore (Nathan Fillion) is attempting to get a film version of Spectrum greenlit, after securing the rights to the show at the end of the first season. 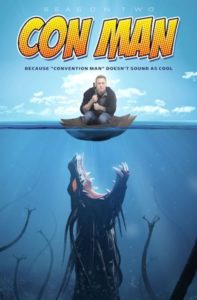 The second season premiere shows a fascinating evolution to the series. While Con Man began in the world of fan conventions, the environment of the show has since expanded to include Hollywood. The script, penned by Tudyk and Josh Dean, provides a witty and interesting take on Tinsel Town. There’s a particularly fun moment as Moore meets with his agents. During the meeting, Jack discovers he’s been replaced by a Hemsworth brother in one of his movies:

“It’s an industry wide trend. All leading men are being replaced with Australians…”.

Another agent chimes in, “They’re just more American… the ruggedness of Australians reminds us of America. The one we like to misremember”.

Later in the scene, Jack learns he was replaced by “Chip” Hemsworth. He exclaims, “Christ! How many Hemsworth’s are there?” One of the agents responds, “Not exactly sure at this point”.  With each episode of Con Man, Alan Tudyk continues to show his skill as a writer as the scripts take the series into new, and continually evolving environments.

Another draw to the series continues to be its’ close relationship to fandom. It’s not a huge stretch for viewers, especially “Browncoats”, to see Con Man’s close ties to Firefly. The show doesn’t shy away from making cross-fandom references either. “What Goes Up” uses Fillion’s Jack Moore heavily, and watching his performance it’s possible to see shades of his Firefly character Malcom Reynolds. There even seem to be even subtle references to Fillion’s iconic portrayal of “Captain Hammer” in Joss Whedon’s web-series Dr. Horrible’s Sing-Along Blog.

In a press call before the release, Con Man co-star Felicia Day reflected on the show’s connection to fandom, “It comes from a place of love. Geek culture can be so disdained upon.”. The first season of Con Man features cameos from performers representing various sci-fi and fantasy fandoms, including: Tricia Helfer, Sean Astin and Sean Maher. There are undoubtably even more interesting cameos to come in season two.

As Felicia Day mentions, Con Man comes from a place of love. The creative forces behind the show are all fans themselves. A number of the cast members reflect happily on working with each other. Mindy Sterling (Bobbie) speaks fondly about Alan Tudyk, “I’d never met Alan, and I just grew to so respect him, and love him. He’s been generally one of my favorite people to work with. I’m in awe of him”. Nolan North (Jerry Lansing) speaks similarly about Sterling, “I was always a fan of (Mindy’s). We got to get in and work things together. She’s a great talent. Fingers are crossed for season three. More Jerry and Bobbie”.

It’s sometimes difficult to remember that actors are just like the rest of us. They are all watching, and are themselves fans of various shows. Nolan North is like everyone else right now, and is all about Westworld. He says, “Westworld is my new thing. You can’t even blink or you miss something. You can enjoy watching it, then you’re trying to figure out what the hell is going on… That one really captured me”.  As the subject of Westworld continued, Alison Haislip added, “I audibly gasped in that last episode!”. Meanwhile, Felicia Day is loving Dirk Gently’s Holistic Detective Agency right now, “It’s the perfect mix of weird humor and sci fi. I love the way it’s shot. It’s so hip. It’s definitely the show I like”. As actors and creators, the cast brings passion to their profession, and this passion is definitely visible in Con Man.

Streaming Con Man is a breath of fresh air. The comedy series provides an interesting and witty breakdown of fandom culture, and it continues to evolve with each passing episode. The Con Man cast is no different from the rest of us. We are all fans. The passion behind the series is evident. If you’re a member of a fandom, you’ll love Con Man.