Home » Movies » Top 4 Things We Saw in the New GUARDIANS OF THE GALAXY VOL.2 Trailer

Top 4 Things We Saw in the New GUARDIANS OF THE GALAXY VOL.2 Trailer

More and more it looks like James Gunn and his crew may have done it again with the upcoming film, Guardians of the Galaxy Vol.2. We’ve seen a teaser, then a trailer and now, as of last night, we’ve got our most revealing trailer yet.

What did we see in it?

NOT A TEAM — A FAMILY

First of all, this trailer is very much about family. More specifically, what it means to be a family. Families are messy. They are people who didn’t necessarily choose to be together, bound by something bigger than themselves. It’s getting along with each other even though you never chose that for yourself, doing something for a family member in spite of yourself. There are arguments, fights, and personality clashes but at the end of the day, you always come back to a hug and an ally. That’s what we see in this trailer — family.

Star-Lord annoys Gamora at the beginning with trying to keep his cool in spite of his hand-wringing at her using guns as well as he does. As he says, “It’s just, swords were your thing and guns were mine, but, I guess we’re both doing guns now. I just didn’t know that.”

We see Quill hesitantly taking on the role of father to Baby Groot, who’s very much just a baby who wants to be involved with what his family is doing.

We see Drax being his charmingly selfish and oblivious self and irritating the entire team, but they always put their trust back in him.

We see Gamora doing her best to be a good mom to Baby Groot during the fight with the Abilisk. Baby Groot waves at Gamora as she’s firing a laser rifle at the space beastie. Even though all she says is, “Hi,” the entire exchange has the feeling of “Mommy look at me,” followed by, “Hi angel, mommy sees you but mommy is busy — fighting a giant inter-dimensional space squid…”

They fight the entire time together, but they’ll fight even harder to stay together and that’s family. Nebula even points this out at the end of the trailer, saying, “All you do is yell at each other. You are not friends.” But Drax, despite it all, has the line, “No, we’re family.”

Kurt Russell is Ego, Peter Quill’s father. We’ve known that for some time, but last night’s trailer gave us our first look at him and he is majestic. Well — to us — he’s majestic.

But just who is Ego?

Ego is an ancient being that is, literally, a living planet. He’s a sentient planet capable of entirely controlling his entire planet surface. However, out of curiosity, Ego the Living Planet created a humanoid extension of himself capable of exploring the galaxy as he had seen so many other species doing. Essentially, he was jealous of their mobility, so he created mobility for himself.

We don’t know much about the character other than that, but we thought we’d point out that we think we get to see the planet surface towards the end of the trailer. The really beautiful planet with the mystical, magical floating bubbles where everyone seems to be really happy and in love with each other — we think that’s the surface of Ego. We can offer no proof of this — it’s just a theory that we like.

Here’s why. It’s idyllic and perfect and magical and beautiful and the team seems to really love it. It’s the perfect place to spring a trap. This seems to be paradise, but there’s got to be more hiding under the surface and we think that’s what we end up seeing. Ego lures you in and then springs his trap. That gives us the question of why does he have to spring a trap, of course, and maybe he doesn’t, but we think that there’s more to Ego than meets the eye. By the end of the trailer, we think he might be as much a villain as Ronan was. After all, we don’t have a serious villain in this film beyond Ayesha or the Ravagers — and maybe they are the only villains — but this would be such a betrayal and such a great slow burn.

We see in the beginning that Gamora and her team were on the Sovereign planet to apprehend Nebula. After fighting the Abilisk and being insulted by Ayesha, they bring Nebula out and pull a hood off of her, with Gamora then giving her the evil eye. We later see her in hand cuffs being lead by the Guardians somewhere. However, we then start seeing her without her cuffs and flying a ship.

In fact, at least in the way they edited the trailer, Nebula seems to take over a Ravager ship, maybe even the Milano, and then uses that to attack Gamora as she runs away on a planet surface. Earlier in the trailer, however, we see Gamora firing her giant shoulder laser cannon at a ship … that resembles that exact same ship and in the exact same terrain as where she was running.

We think this is a knock-down, drag-out, you were the favorite sister jealousy fight between the two of them. They are both so incredibly damaged from their upbringing by Thanos, it’s expected that, of course, they’re going to fight. However, this has the feel of one of those fights that best friends have over a guy or girl — it’s explosive and there are some entertaining fireworks, but they come out on the other side even closer for the experience.

Our guess, they get Nebula, she gets away, maybe even makes nice with the Ravagers, takes a ship, attacks Gamora and her team, somehow they make up and then — together — fight the bad guys(s) at the end.

BABY GROOT
It’s clear — with those big cute eyes and his loving, endearing desire to always be around his family and help them out — Baby Groot will steal the show. At the very least, he’ll steal the parts that Drax doesn’t.

If you’re one of the few people left who have not yet seen the trailer, take a gander below!  After that, check out the poster. 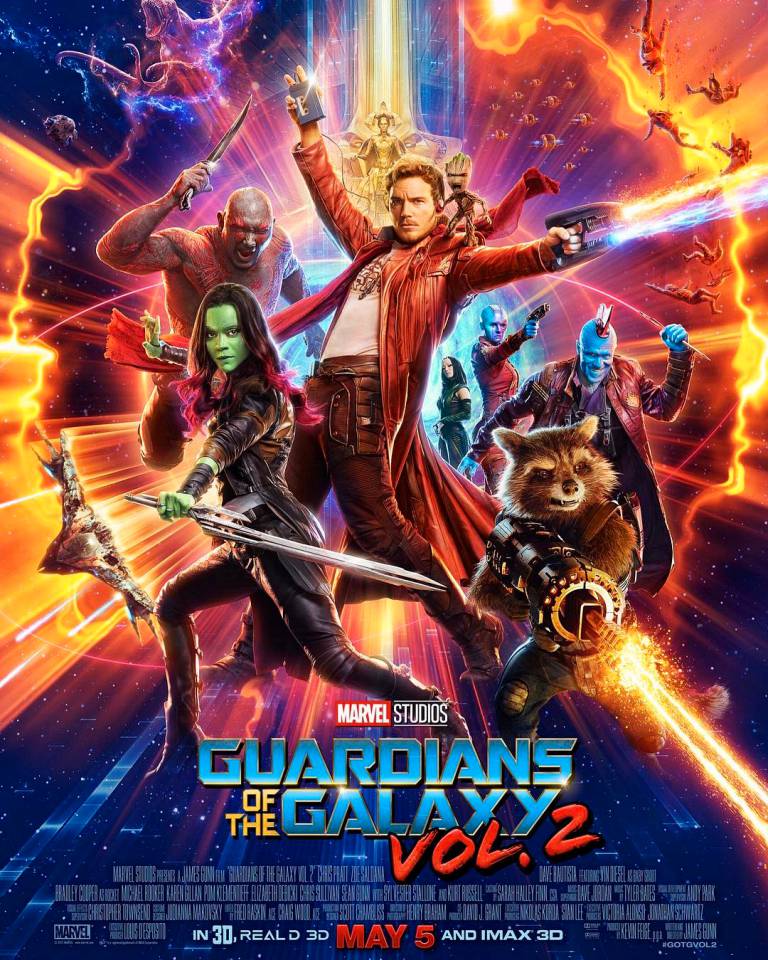