Top 6 Thoughts on That DEFENDERS Trailer!

Today is the day. It’s finally come. The Defenders trailer. It’s a promise Netflix made to us a couple years ago with their four Marvel series — Daredevil, Jessica Jones, Luke Cage and Iron Fist — and now the time to fulfill that promise is upon us.

Though we are still a few months away from the premiere, the series will not actually air until August 18th of this year, today Netflix released a trailer for the series and it looks every bit as fun as we’d hoped.

RELATED: Defenders Gets a Teaser and a Release Date

Here are our top seven thoughts regarding the trailer.

At the beginning of the trailer, we see Jessica Jones (Krysten Ritter) being interrogated by Misty Knight (Simone Missick) for interfering with her ongoing investigation. The city, apparently, is under siege and our guess is it’s The Hand.

Our guess here is that he’s tracking The Hand and knows that she, whether she’s aware or not, might have answers he’s looking for that will lead him to their leader. He needs to help Jessica Jones out in order to help himself get to the bottom of where The Hand is and what they are up to.

How is Luke Cage on a bus and out of prison? The time between his capture and the present day of this series has not been all that long. Did he serve a year and get released on good behavior? Or did someone help him get out of prison through either legal means or illegal means?

Our guess here is that Claire Temple has enlisted the help of her very good friend, attorney Matt Murdock who most definitely owes her a lifetime of favors. Somewhere between the events of Luke Cage and this series, Claire Temple has approached Murdock about helping her boyfriend out of a jam and, Murdock being Murdock, sees the injustice and can’t help but jump on it. With him giving up his life as a vigilante, which is something we’ve heard he’s done, he’s got plenty of time to help Cage out of this jam.

Of course, the likelihood that we are correct here is nil — it’s just a slightly informed guess on our part.

So we see here that their first meeting does not go well. Nurse Claire Temple (Rosario Dawson) introduces the two of them or, at the very least, intends to do so, but their first meeting, for whatever reason, ends with Iron Fist punching Luke Cage with his Iron Fist, and Luke Cage barely flinching. The two of them are immediately suspicious of each other and this sets up an incredibly fun dynamic for them to follow for the remainder of the show. As a comic book fan, we’re all crossing our fingers tight that these two end up teaming up to fight crime as the Heroes-for-Hire.

And though the two of them start off mistrusting each other and exchanging super powered blow after super powered blow, Claire Temple, a trusted friend to both, assures them that they are “On the same side.” And that seems good enough for them.

We don’t mean that as literally — Stick (Scott Glenn) is not a general, but he does seem to be the unifying force behind these four heroes who do NOT want to work together getting together. As he says it, “The War for New York is here,” and he knows. He’s the one that’s been pushing Daredevil to get involved in his war against The Hand since Murdock was just a boy, but now that war is upon them and they have quite the fight ahead of them, as is witnessed in the very next scene — Elektra.

It appears, however, that once the four heroes have teamed up, Stick stays with them for a bit, fighting alongside the team which makes them a formidable team to take on The Hand indeed.

As Stick says, “The War for New York,” the trailer reveals Elektra (Elodie Yung) still in that mystical resurrection urn. We know that she’s somehow related to The Hand and is some powerful human weapon they refer to as “The Black Sky,” but this is all shrouded in mystery. 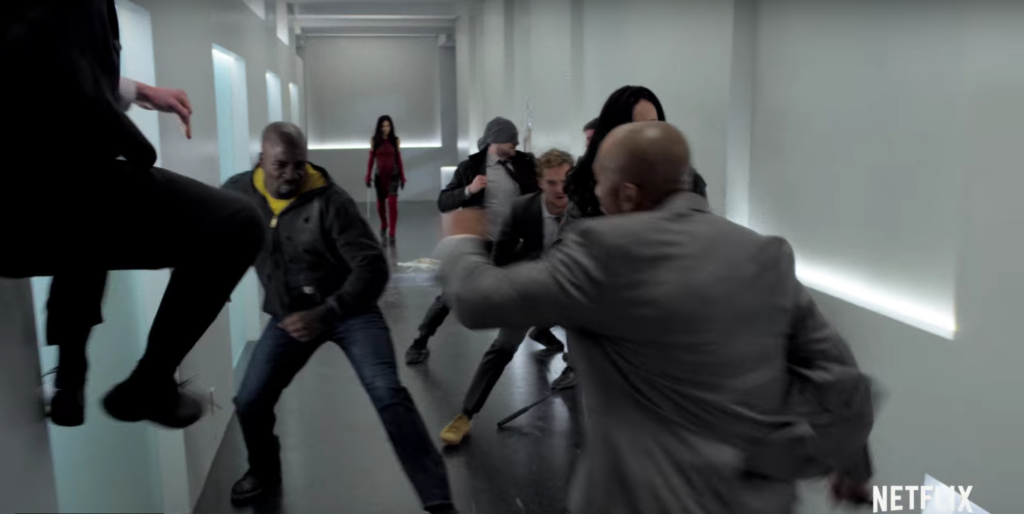 What is NOT shrouded in mystery is the fact that a big fight between our four titular heroes and Elektra is looming — at least the trailer wants us to believe that. It’s been a mystery since Daredevil Season Two what side Elektra would fall on and this trailer is putting her very squarely on the side of the bad guys.

WHAT THE DEFENDERS ARE UP AGAINST

Soon after we hear the dialogue from Stick that this is a battle for New York and we see Elektra, we see some invisible supernatural force wreaking havoc on the streets as it rips apart parked cars. This is immediately followed, in the trailer, by a scene where all four heroes are in a warehouse space with Stick and are all blown backwards by a similar force.

Initially, Stick seemed unaffected by this force, so it seemed evident that he was somehow behind it. However, if you look even more closely at the scene, you can see that he too is affected. Our guess here is that this is some sort of demonic energy summoned by The Hand to help them take over New York City. Obviously, to what end is uncertain, but they seem to very much want the Big Apple under their control. 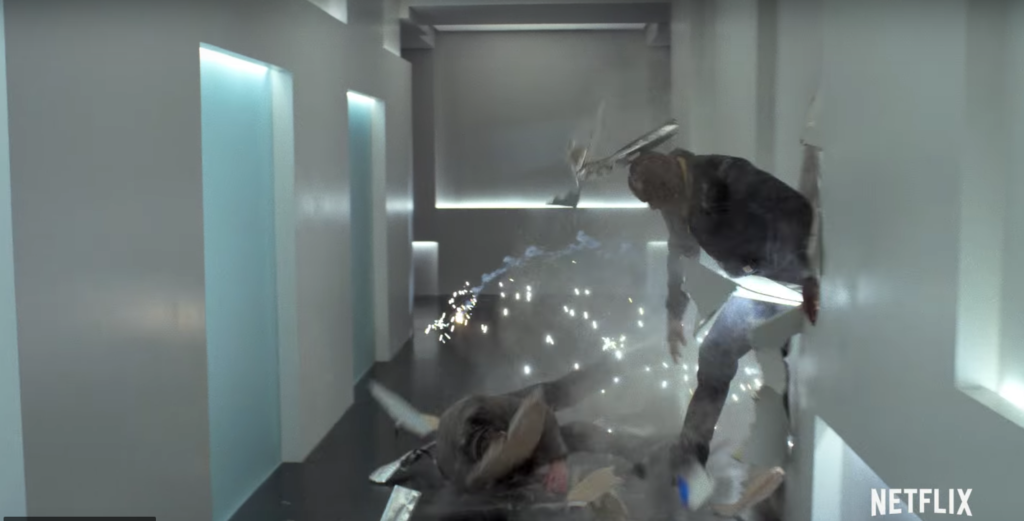 And we haven’t even begun to talk about Sigourney Weaver’s character who we also get our first glimpse of in this trailer. We know next to nothing about her character except that her name is Alexandra and that she believes “the more connections you have, the easier it will be to break you.”

If you’ve been keeping score, than you know the characters on this team have a LOT of connections. Matt Murdock has Foggy Nelson (Elden Henson) and Karen Page (Deborah Ann Woll), Luke Cage has Claire Temple and Misty Knight, Jessica Jones has Trish Walker (Rachael Taylor) and Malcolm (Eka Darville) and Iron Fist has Colleen Wing (Jessica Henwick) as well as, you know, the entire mystical city of K’un L’un which has just gone missing. So, yeah, lots of connections and loose ends to decimate each character on a personal level.

And now we know why Netflix was adamant to have all of them appear. 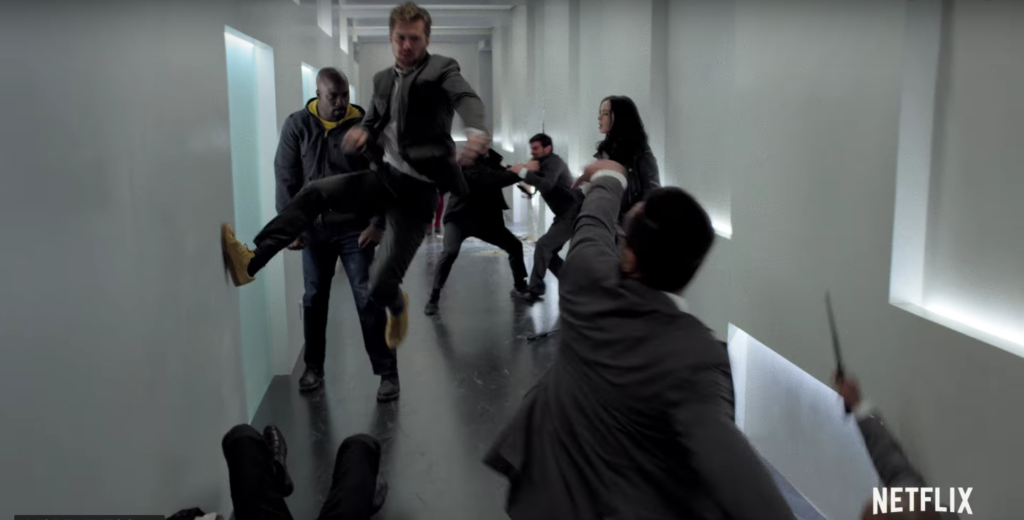 Finally, while we don’t see a whole lot of it, we do get a sense of camaraderie in this trailer, with the team all coming together under Stick’s, presumably forced, leadership. That is, none of the four want to actually work together at first until Stick sort of forces them to do so. Of course, this can’t be a smooth transition as we see in exchanges like the one between Jessica Jones and Matt Murdock in the hallway when she tells him, “You look like an idiot,” to which Murdock responds, “It’s your scarf.” 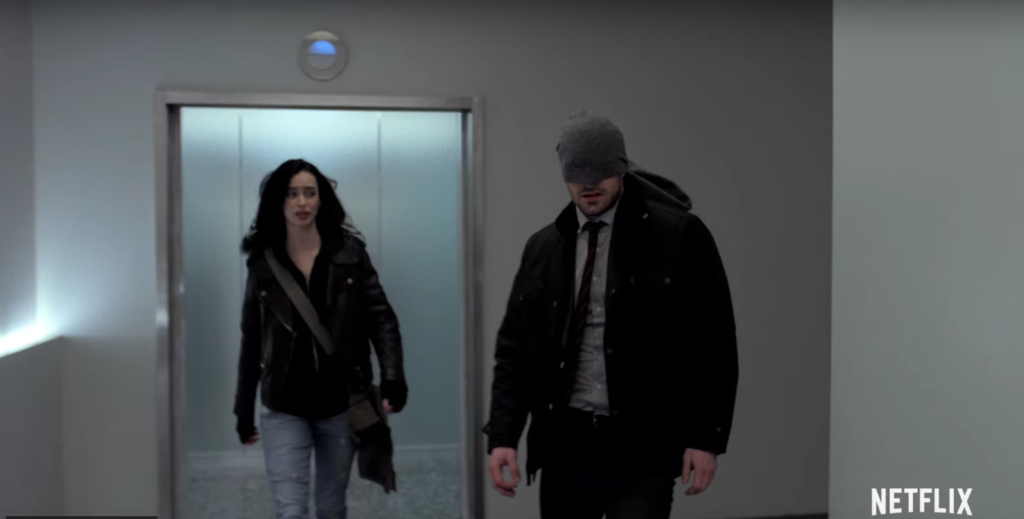 So, sure, they’re going to work together and fight this common enemy together, but it seems, much to our delight, that they’ll be kicking and screaming the whole way.