PAX Australia has wrapped for another year and I already miss it. So it’s only fair in post-PAX-glow that Geek Girl Authority should showcase some incredible game developers that featured this year. I spent my Saturday morning laughing and chatting to some really talented Australians that have left me feeling seriously invigorated and inspired at the state of the industry in our little corner of the world.

Here are my Top 5 Indie Games of PAX Australia in no particular order:

Oh.  My. Goodness. This game is such good fun. Let’s face it, it’s hard to get a good idea and feel for a game when you’ve only got a limited time to play at a con – but I got so much out of this little gem. Paradigm is a point and click game with humour that’s kind of across between The Mighty Boosh and Monty Python.

You play Paradigm, a character whose life begins at DUPA genetics. DUPA grows and sells prodigy children to the rich and powerful, people who don’t want to leave their inheritance to their less-than-ideal biological children. Something went wrong in Paradigm’s growing process and he was left horribly mutated. To save their reputation, DUPA dumped the hideous infant in a nearby post Neo-Soviet abandoned town, forcing Paradigm to fend for himself. Paradigm finds solace in music, dreaming of becoming the best electronic music artist the world has ever seen! Unfortunately his past is set to catch up with him and he must reluctantly step up as the world’s saviour (when really he just wants to finish his latest EP).

I found a commentary-free demo of the game on YouTube to give you a taste of what to expect (but if you want to remain spoiler free, skip to the next lot of text.

If you’re still not convinced, here’s a picture I took on my phone of the DOG TUTORIAL. Yeah, you heard me. Dog. Tutorial. In a game. 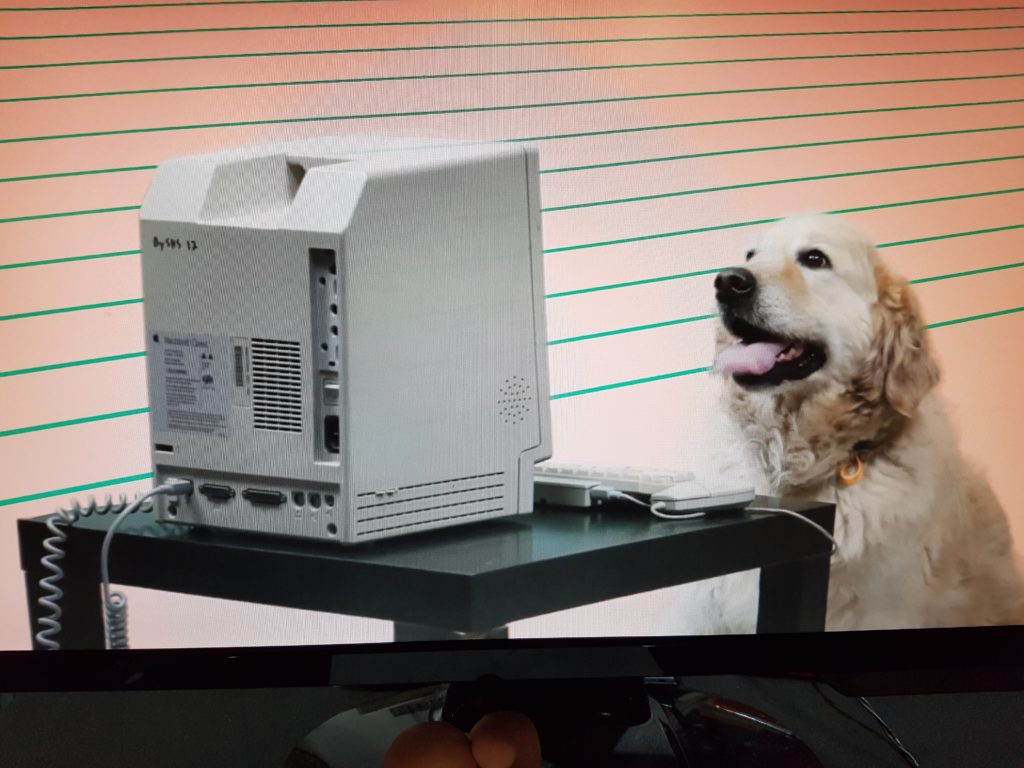 Paradigm comes out January 2017 and it’s definitely one you need to have on your list to try. Just wait ’til you see the Pug and the Sloth…

The Eyes of Ara is another point and click game, but contains puzzle solving goodness in a beautifully made digital environment. I had so much fun exploring in this game, the detail is simply gorgeous. The puzzle solving elements reminded me of the mobile game The Room, but turned up to 11 – you get to explore entire rooms (not just complex puzzles) on a much larger screen, with the rooms and environment shaping the mystery you’re trying to solve.

What I enjoyed most about this was how the progression of difficulty developed as you entered new areas. Puzzles become more complex the further you go, which is really satisfying and rather addictive in this gorgeous castle environment. The Eyes of Ara is totally a game you can play to build on your problem solving skills, whilst giving yourself something to focus and relax with if you’ve had a particularly stressful day.

The Eyes of Ara is available on Steam.

3. The Artful Escape of Francis Vendetti 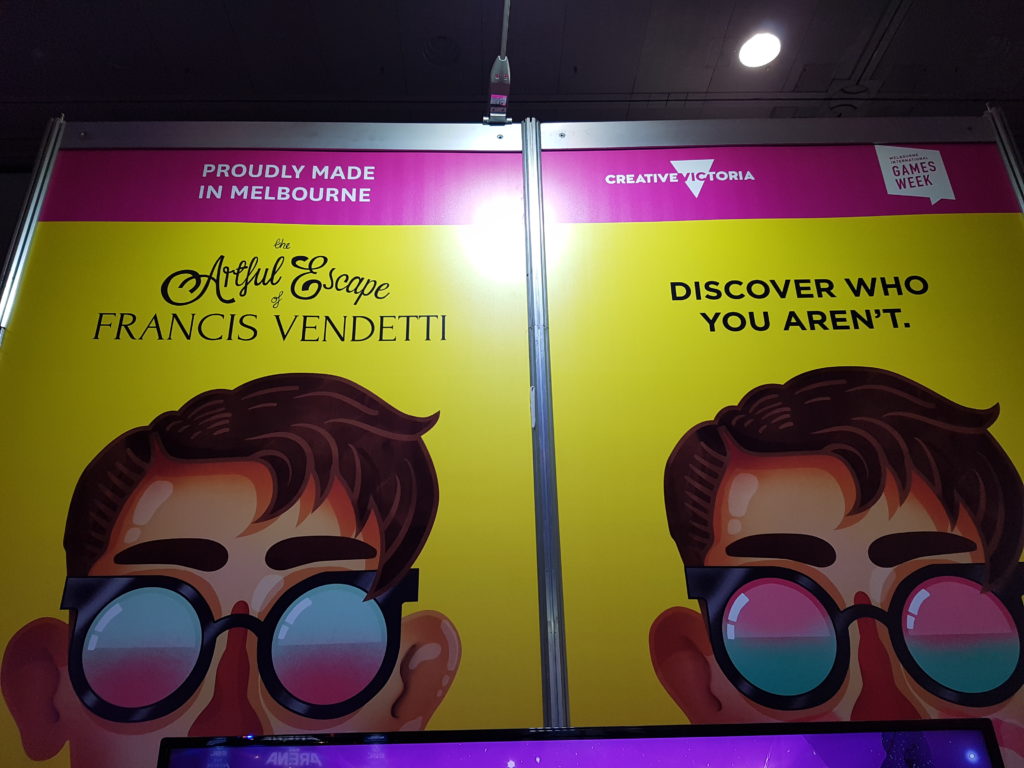 As I was playing, I felt a sensation similar to the first time I first picked up a controller for Journey. I was entranced by simplicity and beauty, finding myself relishing each small moment that took place. For an anxious mind, this is a really nice experience to have when you pick up a new game. As I ran Francis around the glittery landscape that surrounded him, I found myself stopping to enjoy the background views, even lingering every now and then over a guitar solo that made me feel like a rock star.

It’s the kind of game I feel like Bowie would have played (did Bowie play video games?) It’s fun, soulful and unlike any other music/art inspired game I’ve played.

The Artful Escape of Francis Vendetti does not have a release date yet but put it on your watch list for when it does. It’s not one you will want to miss. 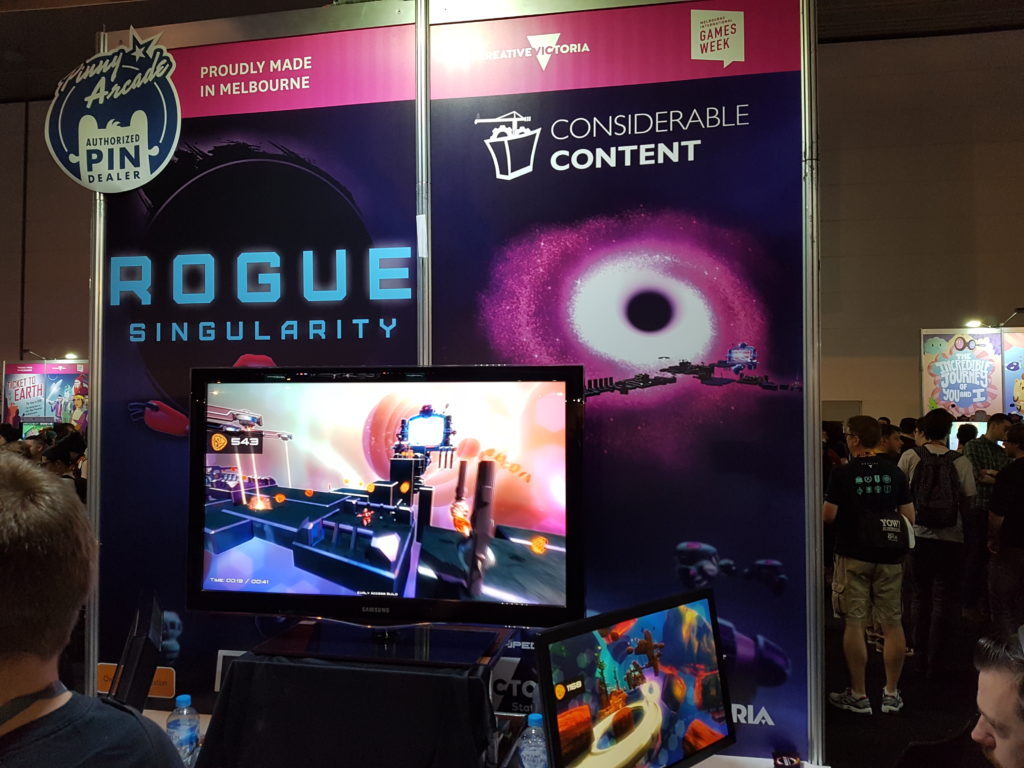 Rogue Singularity is a game I wouldn’t have expected to see in the indie game scene in Australia 5 years ago. The tech just wasn’t there, unless you had the cashy money – but even if you did you were probably working on bigger titles and with large international game companies.

This game is a high-speed infinite obstacle course. Navigate the perils in each course at the edge of a rogue singularity as it tears worlds apart. Customise your robot, face infinite challenges and fight to survive. Traverse universes to discover what lies beyond the void…

I had a lot of fun with this game! The robots are cute and the environments fun to traverse as you avoid getting smacked off ledges and missing jumps. The small part I played flowed nicely, and it’s definitely a game I want to get stuck into after PAX to see how the levels progress along. The completion-ist in me is looking forward to unlocking more custom characters and tackling challenges and time trials that are waiting to be met.

Inflatality is a fierce, derpy physics fighter featuring inflatable wavers beating the crap out of each other. Give your waver a unique look, name and skills, then FIGHT. Unleash rubbery combos, spanks and smacks to inflate your power bar, then dominate your opponent with devastating supers.

Yep- it’s Mortal Kombat with those stupid inflatable things they put out the front of car yards. It’s silly, ridiculous, and an awful lot of fun.

Any indie games you loved seeing at PAX this year? Leave a comment in the comments below! But for now, I’m going to go fall down and sleep.