I really dig the Tiny Epic series designed by Scott Almes and published by Gamelyn Games. I’ve played Tiny Epic Galaxies a lot, Tiny Epic Kingdoms a few times, and now I’ve gotten the chance to play the latest – Tiny Epic Western – a couple of times, so it’s time to share my thoughts on this little feller. TEW places 1-4 players in an 1800’s western town. Each player has his or her own character they will play during the game, with a unique special ability. Players take turns placing 2-3 meeple henchmen around town, gathering resources and vying for position to buy real estate in order to corner the market on the town’s industry. These actions translate to victory points at the end of the game. 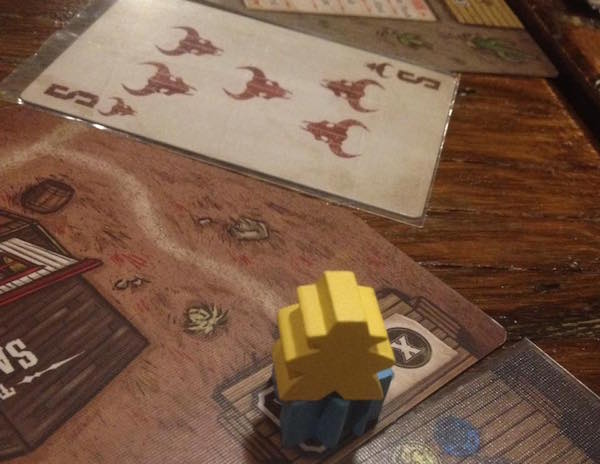 TEW is played over 6 rounds. During a round players will be dealt two poker cards of which they will keep one. This card will be used in a couple of different ways over the course of the round. First, it can boost your roll in a gunfight, which will occur when two players place their meeple on the same spot in town. Other times it will be used, Texas Hold Em’ style, to determine whether you can buy or control certain pieces of real estate currently on the board. The gunfights are a simple roll of a six sided die by each player. Then each player has the chance to modify his or her die by using special powers or expending resources to re-roll. The player who ends up with the higher number at the end of the fight gets to use the location. It takes all of 30 seconds to resolve a fight, and yet it does a perfectly fine job as a game mechanic. 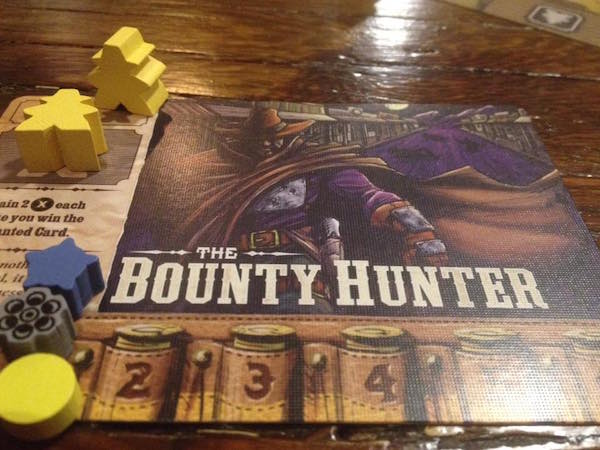 I would be remiss if I did not mention TEW’s game “board.” Tiny Epic Western sports a unique table set up (using only cards) that is quite clever. The layout ends up looking like a wagon wheel, which is not only thematically cool, but also facilitates the game’s mechanics. The set up places poker cards so that they can be combined with the single card in each player’s possession. This ends up forming the 3-card poker hands mentioned above. It is a really cool idea and works very well in the context of the game. 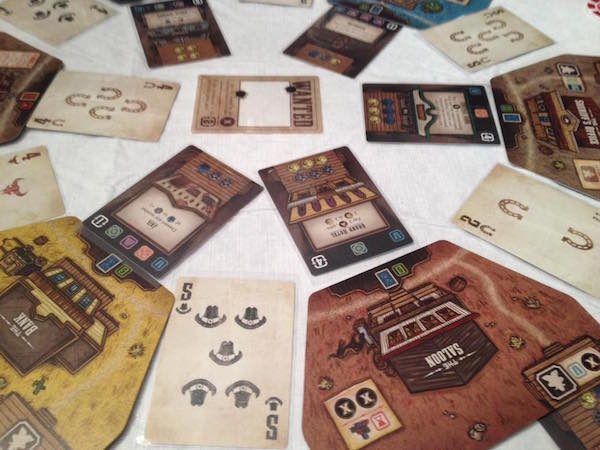 As with other Tiny Epic games, TEW lasts less than an hour. What has always gripped me with these games, though, is that after the relatively short game time you DO get the “epic” feeling that you got a lot of game out of it. Victory points are relatively hard to come by and both games I played (one 2 player, one 3 player) had first and second place separated by 1 point at the end. That’s a good bang for your gaming buck. Overall, I like Tiny Epic Western about as much as I like Tiny Epic Galaxies, which is a lot. I look forward to getting to know the different bosses in this tiny epic town, and get a chance to rabble rouse some more with them. This game is definitely worth checking out. (Insert

Well, y’all, thanks for reading and have dandy week. And remember, for this and other nerdilicious games, check out www.dicedropgames.com. Yeehaw!!!