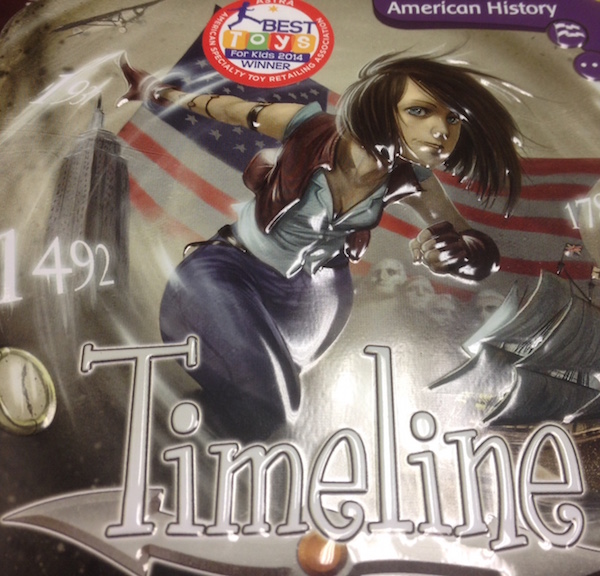 I’ve had Asmodee’s Timeline: American History in my possession for months now, but I’ve been staring it down like Greg Focker with his Speedo in Meet The Parents, afraid to try it out. Well, as has been proven many times, I’m a dummy. At the office yesterday my co-workers and I had a rare birthday lunch together and out came Timeline. I figured it was simple and quick and could appeal to a wide swath of interests. It worked out great. 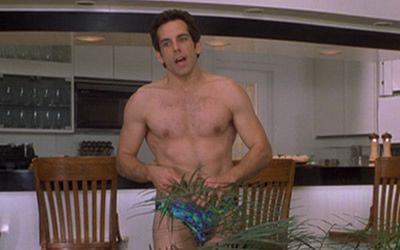 Timeline is designed by Frederic Henry and plays 2-8 people. The game consists of 110 cards, each with a particular event in American history listed on them. The cards have the same art on both sides, but one side shows the date on which the event occurred. Each player is dealt 4 random cards which are placed in front of them (date side down). One random card is chosen from the draw deck and is placed date side up in the middle of the table.

On their turns, players try to place one of their cards in the appropriate place on the timeline. Once placed, the card is checked for its date. If it is in the correct place in the timeline it remains, and if not, it is placed back in the box and that player draws a replacement from the deck. Either way, the player’s turn is over and play passes to the next player. This goes on until someone plays his or her last card. When that happens, players continue to finish that round. At the end of the round, anyone without cards is still in the game and everyone else is out. If multiple players are out of cards, those players draw one more and play (sudden death style) until only one of them has no cards at the end of a round.

Timeline takes about 15 minutes, and the box is very portable, making this a great game to play during lunchtime or at a pub. The rules are super easy, but there were some exciting moments when a player had only one card left and had a difficult decision to make. The other truly underrated aspect of the game was the fact that we felt like we LEARNED something while playing. We constantly were talking about where we were or whether we were even born when something occurred, for example, the Space Shuttle Challenger blowing up on live TV. There were times where we were surprised, like when we revealed that the World Trade Center wasn’t built until 1973. Overall, we had a surprisingly fun time while feeling like we increased our brain size (and patriotism, of course). 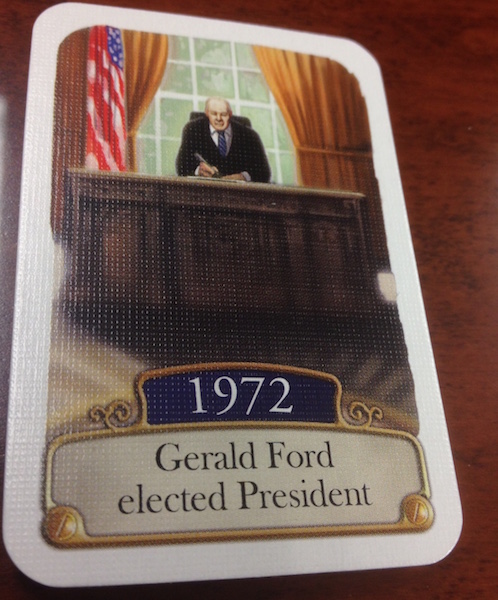 The only complaint I have with the game is a pretty big one. There was one card that we found that was completely wrong. Luckily, someone in our group knew the event (Gerald Ford becoming President) and pointed it out to us. First, Ford was never elected President – he took over after Nixon resigned and lost to Jimmy Carter in 1976. Secondly, the year he became President was 1974, not 1972 as printed on the card. For a game whose ONE JOB is putting dates on cards this is a pretty big mistake. Still, we were able to get a learning moment out of it. I’ve heard there are a couple of other (slighter) issues with card wording and dates, but the Gerald Ford one seems to be regarded as the worst (per Board Game Geek). I hope if they make further printings of this edition Asmodee fixes this. 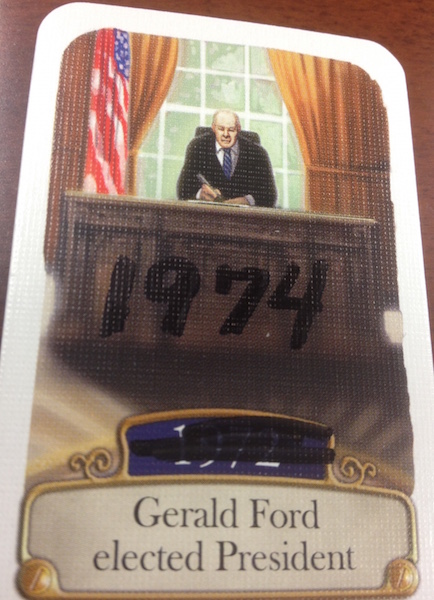 Even with the one problem, I was very pleasantly surprised with how much fun Timeline was. Several co-workers have added this to their holiday gift list. Further, there are several different Timeline games in the series, Inventions, Discoveries, Diversity, etc. So if you became too familiar with the 110 cards in this game, there are more options to continue the fun. I think Timeline would be a great addition to a family’s board game collection and would be a great tool/gift for any school teacher. I really encourage you to check it out.

Thanks for reading and keep nerding on!