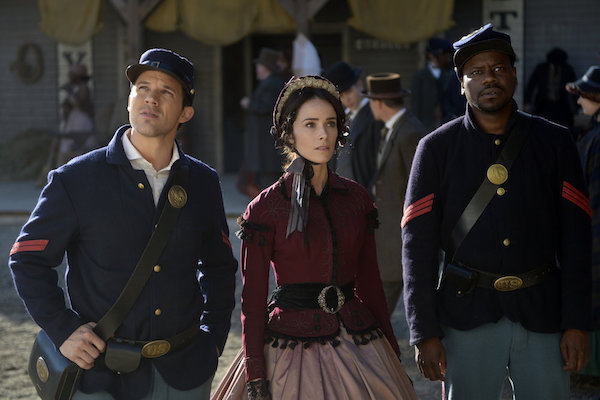 Logan is daydreaming about who he’ll shoot next

I need to tell you a story before we get into episode 2 of NBC’s Timeless. Not sure it’s important, but it’s relevant. And it may have impacted how I feel about this week’s episode.

Last year I put my time-travel obsession to work. My wife’s theater company holds a fundraiser several times annually: a short play festival (with open bar!). There was a 1930s theme, so I wrote a radio play in the period style, modeled after Flash Gordon-type sci-fi serials for kids. Remember I mentioned Voyagers! last week? I stole that premise and wrote “The Time Fixers”: a hero and his plucky sidekick travel through time fixing history and chasing a chaos-loving villain called the Time Smasher. The audience watched as the radio play was performed live complete with music and a Foley sound effects table. The characters (1930s broadcast professionals) read the script for the first time live on the air. 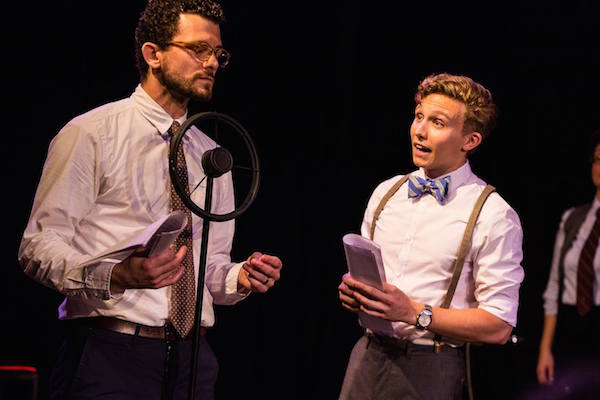 But something is wrong with the script: it calls for our heroes to go back to 1865 to make sure that Abraham Lincoln is assassinated. (The Time Smasher has convinced Booth to give up his plans for terror and vengeance, and return to the stage as an actor.) Remember, this is supposed to be a broadcast for kids. There’s even a ‘hearty breakfast cereal’ sponsor. All but one of the performers realizes the story is totally inappropriate for young listeners, and the rest of the play is a struggle to come to grips with the predicament as it unfolds live on the air. Eventually the script calls for the hero to disguise himself as Booth and assassinate Lincoln himself. (Keep in mind for later: I wrote the first draft in November of 2014. Performances were in June 2015.)

Yes, it was dark humor. It performed twice, and I don’t mind telling you it was very funny. I was fortunate to have a terrific cast and my uber-talented wife as a director.

When I first head about Timeless I kinda freaked out, because the premise was very close to the Time Fixers. And here we are at episode 2, and I’m freaking out again, because Flynn has arrived in 1865 and is tinkering with the events surrounding Lincoln’s assassination. But Timeless is ostensibly for grownups, airing at 10pm ET Monday nights, which means the question of whether it is either wise or ethical for a time-traveler to prevent Lincoln’s assassination—or, for that matter, to facilitate it—can be fully explored.

Ultimately, the episode left me unsatisfied as a TT fare enthusiast. (I’m beginning to think the show is probably better for history buffs.) Timeless, as you will recall from our discussion of the pilot episode, has a problem: the show’s creators have insinuated that certain events must transpire as essentially preordained or fated, but they have also made clear that other things can be radically altered.

This is the type of inconsistency that loses wormhole-points on my integrity scale. Worse, the creators don’t seem to be able to remain consistent. As a result, we don’t know at the end exactly why things turned out as they did. Did Fate intervene? Or did our heroes simply fail to accomplish what they intended? Episode 2 is quite muddy by the end.

It starts out with promise, though. Lucy is struggling with the changes in her timeline, and finding that her companions haven’t noticed anything unusual in their own lives. Discussing this at TT base camp, Mason (the billionaire character) takes a moment to articulate what has happened: he says that Lucy has “come from” a timeline where she has a sister to this one where she doesn’t. He’s as intrigued as Lucy is horrified and grief-stricken, but little more is said about it. So here’s the question: Is Mason right? 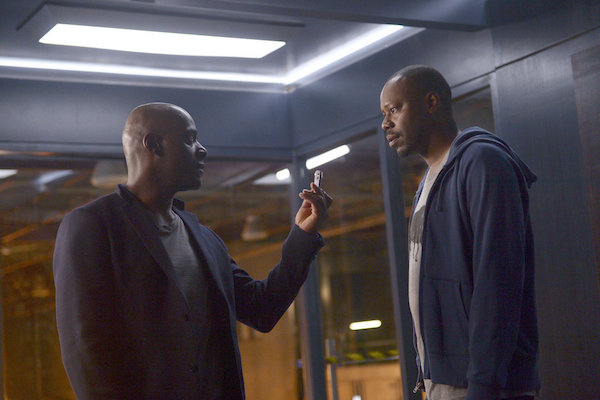 What are Mason and Rufus plotting? What is Rittenhouse? And should we care?

If Mason is right, then we are dealing with at least two timelines, and every episode, every trip back, is likely to create a new one. But we don’t know if it’s possible to return to the original (or at least familiar) timeline. Perhaps the writers are dabbling in a Many Worlds Theory scenario, where there are essentially infinite timelines? (If so, they may start veering into Sliders territory, eventually. Remember Sliders, everybody?)

If he’s not right, then…who knows? They keep trying to catch Flynn and minimize the damage along the way, I guess. I wonder if the show creators even know? 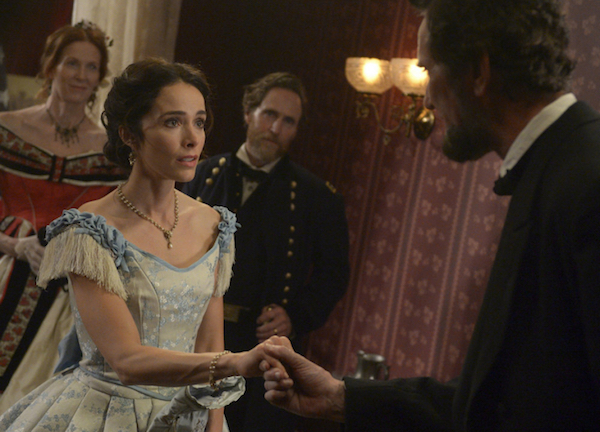 How do you do, Mr. President? Please get out of the building. I mean, er, nothing. There’s no assassination plot. I mean, er, what? I didn’t say assassination, that’s crazy, why would I say assassination? You’re crazy if you think I said that. Anyway, nice to meet you, enjoy the play, or don’t. You could leave, instead. It’s your call, sir, I guess…

Brass tacks time: Our heroes travel to Washington, D.C. on April 14, 1865. It’s the date of Lincoln’s assassination, so they have little time to spare. (I mean seriously, do they have a time machine or not? They are going to have to explain again why they can never get there ahead of Flynn.) Here’s a quick review of the subplots: Logan gets shot, because of course he and Flynn had to start shooting at each other again. Rufus confronts his fear of his own cowardice, with a little encouragement from Logan. And Lucy has a few close encounters with the president’s son, Robert Lincoln, with more than a little flirtation and affection. 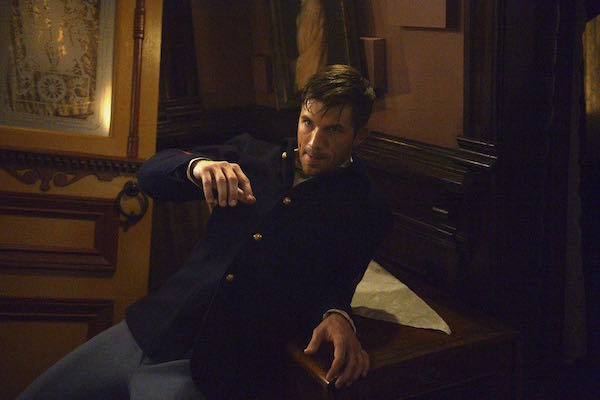 Why do I keep getting punched and shot? Life is unfair, I suppose.

This works out well, because it places Lucy in the box at Ford’s Theater where the president will be sitting with his wife, and with General Ulysses S. Grant… Wait a minute… That’s not historical! No, Grant is there because of Flynn’s machinations. He knows, as Lucy does (she wrote a book, don’tcha know), that Booth was part of a larger conspiracy to assassinate not just Lincoln, but also Grant, Vice President Jackson and Secretary of State Seward. Historically the conspiracy mostly fell apart, though conspirator Powell did stab Seward, who survived the attack. Flynn wants the conspiracy to succeed, and arranges for Grant to be in the box so that Booth can kill him and Lincoln both.

Logan and Rufus keep asking Lucy why they can’t save Lincoln, as well as the others. Lucy responds with Butterfly Effect explanations—cascading consequences that can’t be predicted, possibly more harm than good—but she doesn’t seem to be able to convince herself, much less her comapnions. Meanwhile, Flynn in running into his own troubles with altering timelines: Booth doesn’t want to carry the gun Flynn insists upon, the modern one that holds many bullets, preferring to carry his Deringer because it’s “more dramatic.” (How ya gonna kill two guys with one bullet, Johnny?) So Flynn knocks Booth out cold, and takes his place as assassin. 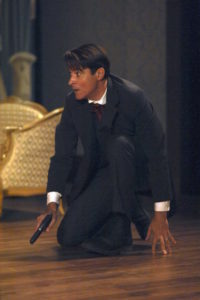 (Didja catch that? The time-traveler kills Lincoln himself. See intro re. The Time Fixers, above. This is freaking me out, still.)

At the fateful hour, Flynn succeeds only in killing Lincoln, thanks in part to Lucy’s interference. Apart from changing the identity of Lincoln’s killer from Booth to a mystery man (never identified or found, of course), the timeline remains mostly as it had been. (We even learn that Booth was identified as a conspirator and hunted down and killed, much in the same way he was hunted down in our more familiar historical record.)

But Lucy later confesses to her companions that at the last second she tried to save Lincoln, consequences be damned, and failed. So here’s where the questions about time travel arise. 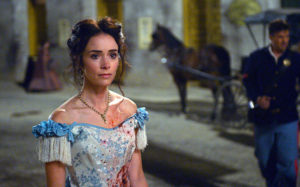 I failed to save the president, and I’m covered with blood. But at least I know who my father is, and I’m not engaged to marry a complete stranger, and…

Is this the kind of TT story where we can change historical events? I’m not clear yet to what degree the timeline attempts to right itself and to what degree it requires the stewardship of our plucky heroes. Did “The Past push back” against Lucy a la 11.22.63 when she tried to save Lincoln? How about against Flynn when he tried to nurture Booth’s conspiracy to full fruition? Or did the two competing efforts just cancel each other out?

The episode wraps up with a couple more interesting nuggets. The first comes from Jiya, a tech who has been looking into how preventing the Hindenburg disaster resulted in Lucy having no sister. As it turns out, because a certain relative didn’t die on the Hindenburg, Lucy’s parents never met and married. So how does Lucy still exist? Fair question. Think about it…

Yup, that’s it. Lucy just found out her dad is not her biological father. Oh, and then she goes home to the uncomfortable and awkward occasion of an engagement party—her own, to a man who seems to know her intimately but is, to Lucy, a total stranger.

Timeless still has my attention. I’m still intrigued by the premise and by the possibilities, if not by the execution. But I’m only going to be able to watch so many more episodes before I start to get overly annoyed with how…let’s say, how soft the rules are with respect to TT. I don’t need hard rules, necessarily, but I do need to know that the writers are not making it up as they go along. Which they very well might be.

TT Integrity: Low marks for this episode. Just not sure the show creators know what’s going on. Plus, they seem to be using TT as a device to unearth soap-opera-style plot devices about Lucy’s parentage, and then put her in the weird position of having to pretend she has been intimate with a man she’s never met. A little gross.

Determination: 4.5 wormholes on my 10-wormhole scale.

TT Narrative: I’m giving more marks here. Loved the exploration of the question of whether or not to save Lincoln. Loved Lucy getting emotional when the trio arrive in 1865 to see fireworks, and she explains that it’s a celebration—the Civil War had just ended. (I got a little emotional.) Loved the introduction of discussion of alternate timelines, which holds promise for later. And I loved Flynn insisting to Lucy that he is trying to save America, not destroy it. The best villains always have the best of intentions. 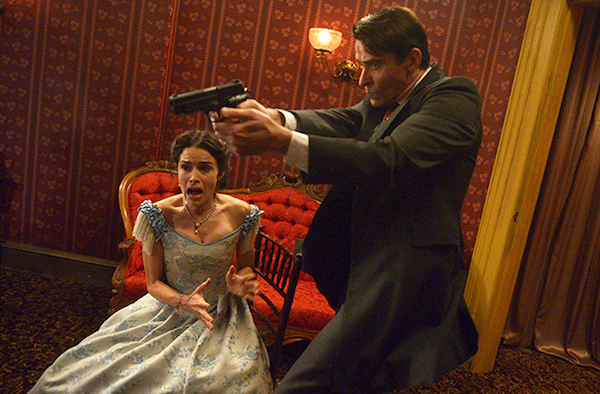 Oh, no! Someone has shot Lincoln! Exactly as I knew someone would!