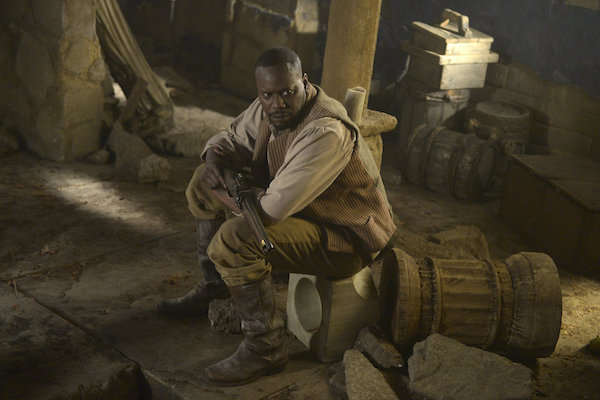 TIMELESS, Episode 5 (“The Alamo”) – A Review for Time-Travel Fans (SPOILERS!!)

First of all, a recent revelation I’d like to share with you: At the end of every episode of Timeless, our heroes are always having to explain to Mason, Agent Christopher, and everyone else in time-travel HQ what was different about the timeline before they went on their latest mission and changed history (again). So if I were them, I’d insist on bringing a rough copy of Wikipedia or some other reference guide with me into the time machine, so that when I come out back in the present they can check history against history for themselves. No more protesting to the time-travel HQ folks that “Ian Fleming never wrote that book” or “the Hindenburg was supposed to kill dozens of people” or “I swear I had a sister.”

Just an idea. (I’m pretty sure that after years of obsessing over this kind of detail that I would make one hell of a time-traveler.)

Episode 5 opens at the Alamo, where we hear the voice of Lt. Colonel William Travis of the Texas Army speaking the words of the historic letter he wrote from within the walls of the doomed fort just days before its fall. The too-late letter exhorts the American People to send reinforcements that would never come, but had the effect of rallying the United States to the Texan cause of independence from Mexico. As Lucy will point out later, with no such letter there would never be a State of Texas, whether an independent republic or part of the U.S.

After the cold-open in 1836 San Antonio, we are back at time-travel HQ where Rufus confronts Mason about Rittenhouse messing with his car and threatening his family, only to learn that Mason is just as frightened of the mysterious group. Meanwhile, a NCTC bigwig has arrived to replace Logan, because he hasn’t successfully killed the wily terrorist. Logan seems cool with it, but as we learn later, it’s a cover. 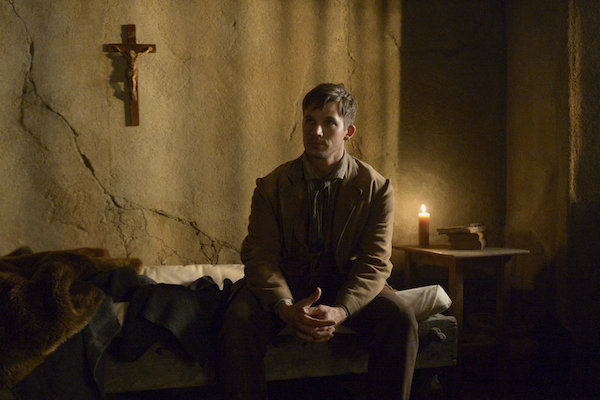 I got fired. And I’m trapped in the Alamo. Other than that everything’s fine. Why do you ask?

Once Jiya has determined Flynn’s next move, Lucy gets the call. Her mom confronts her about the secretive nocturnal trips to Mason Industries and the effect it could be having on Lucy’s academic career. Lucy puts an end to mom’s meddling with a well-placed “Oh, yeah? Well, who’s my dad?” That shuts her up, but good. (Seriously, mom, did you think you could keep that a secret for Lucy’s whole life?)

The team reunites, apparently just one more time, for a trip to the Alamo to find and thwart whatever Flynn has planned there. This time Logan is bringing grenades. (I still think a flash drive loaded with 19th Century American history would be more important, but no one listens to me.) He explains that he’s been fired, and that he means to kill Flynn but good this time if given the chance—and shooting at the time-terrorist has been ineffective so far.

And then, there we are at the Alamo, meeting the famed heroes who will soon die as martyrs, including Jim Bowie (for whom the knife is named) and the legendary Davy Crockett. (“He has the hat,” says Rufus in mid-mancrush.) We also see Flynn with Santa Anna, doing a little double-dealing. But we don’t know why until Flynn actually shows up inside the Alamo in the dead of night to assassinate Lt. Col. Travis—who would be dead soon anyway, so…what? Why? 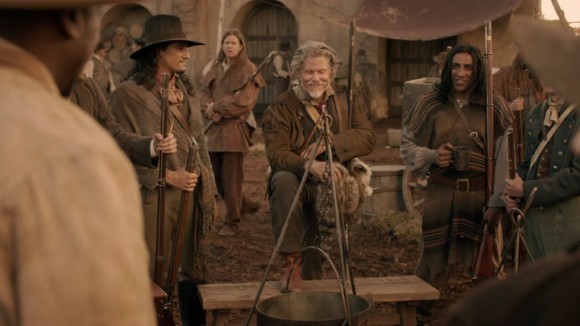 Look, he DOES have the hat!

It’s the letter, of course, as Lucy explains, too late. Flynn put a bullet in Travis before he could finish putting pen to paper, and though the famed “Victory or Death” letter would never save the Texan soldiers from Santa Anna’s siege, U.S. and Texas history would never be the same. Without that letter, neither you nor I may have ever even heard the words “Remember the Alamo.”

Hey, wait a minute…how did Flynn get in there? Is this a fort or not?

Oh, and did I mention that Logan is having PTSD-induced flashbacks? Seems the war setting can be triggering, and Logan has been suffering survivor’s guilt since his exploits in the Middle East. With no mission to return home to, it becomes apparent that he plans to stay at the Alamo because he can’t leave good men behind to die, again. It’s a suicide mission, but he doesn’t care. That is, until Lucy manages to convince him that she and Rufus are his team, and it’s them he’d be leaving behind, not the doomed rebels of the Alamo.

All of this is pretty good stuff, actually. Episode 5 brought me as close as I’ve come to caring about Logan as a character. His flashbacks are essentially hallucinations, and they are seriously creepy and compelling. And though I never worry for even a moment that this is the end for Logan or even the end of his time-traveling, the scene in which Lucy convinces him that she and Rufus need him more than the Alamo does…well, I can admit it: it got me.

Ultimately, the team manages to foil Flynn’s machinations. Lucy manages to write a letter for Travis that would make any Texan proud, and Logan manages to convince a boy courier that carrying the letter out is more important than staying behind to fight alongside the doomed—during which he seems to be convincing himself as well as the boy. (Maybe Matt Lanter who plays Logan is a better actor than I’ve been giving him credit for?… Hrm… Maybe. He needs to sustain this level for more than one episode. We’ll see.)

Of course, the team needs to hurry up about it. Flynn’s interference has emboldened Santa Anna, who has not only decided to attack a few days early but also to raise the red flag: a “no prisoners” signal that suggests that even women and children will not be allowed to survive. Even Flynn is shocked, but dude, you’re messing with history—when did women and children become a bridge-too-far for you? What about the innocent people you planned to kill on the Hindenburg in episode 1?

So Rufus uses Logan’s grenades to blow a hole open in the floor of the Alamo’s sacristy, where a 100-year-old aqueduct provides a means of escape for the women and children, including the courier with Lucy’s letter. Oh, and Rufus, Lucy, and a reluctant Logan. 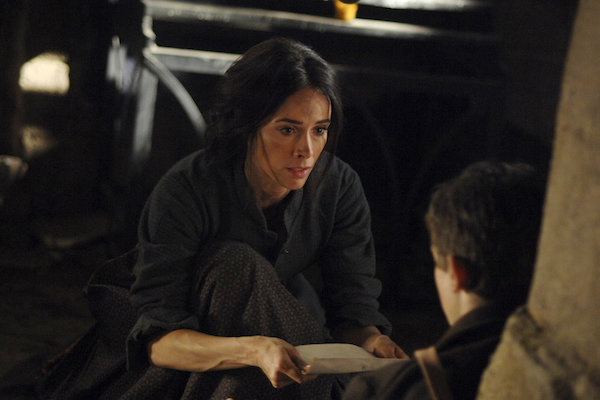 Please, take this letter out of here! 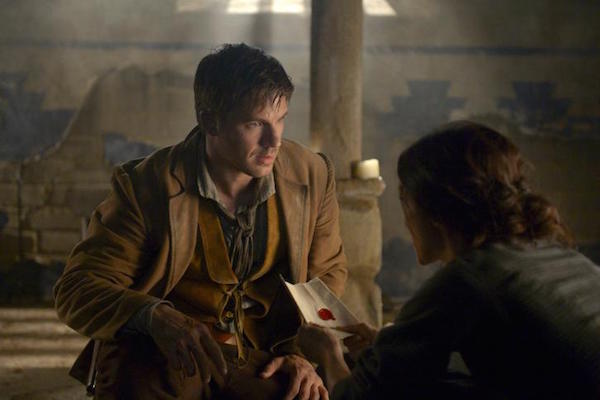 He won’t listen to me, you talk to him. 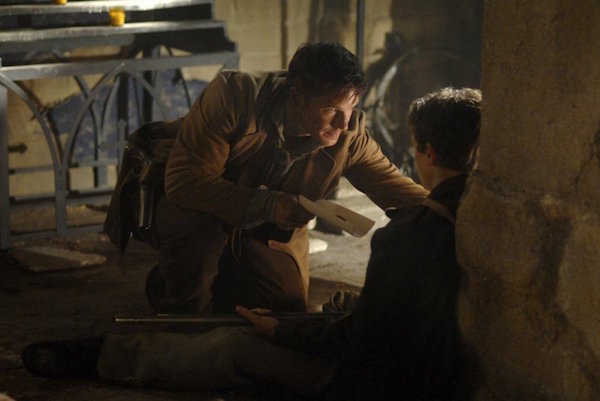 Kid, take this letter out of here…you know, instead of dying.

Back at time-travel HQ, Rufus and Lucy stick up for Logan, threatening not to participate in any more TT missions without him. It’s a nice moment, although I almost choked on my pork rinds when Lucy professes “he makes the right choice every time.” Are we thinking of the same Logan?

At home, Lucy’s mom has relented: she tells her daughter of her father, apparently a handsome and argumentative professor with an interest in a political career. And she gives Lucy his name.

Folks, I will be really disappointed if Lucy’s father is not somehow involved in either (a) recent American history in which Flynn has an interest, or (b) time-travel, or Rittenhouse, or Mason Industries, or NCTC, or something having to do with the rest of the show. Remember, I have rules for what makes time-travel stories work well. This falls under the “narrative” rule: red herrings are okay, but loose ends are not.

Thanks for the knife, Mr. Bowie. Good luck with dying, and all that.

TT Integrity: No major complaints this week. And we seem to have settled into an intriguing formula with respect to historic events: Our heroes seem to function best as triage medics, quickly determining which historic events are most critical and which are bleeding out the fastest. They know they can’t fix everything Flynn is screwing up, so they are left trying to minimize the damage. My only problem with this approach is the absence of much consideration (on the part of the show’s creators and writers) of any Butterfly Effect. Somehow only the Hindenburg events caused the disappearance of a notable character from the timeline?

Determination: 6.5 wormholes on my 10-wormhole scale.

TT Narrative: Maybe best narrative use of TT yet, and surprisingly, it’s because of what we learn about Logan: his experiences as a soldier, his survivor’s guilt, and ultimately his dedication to his new mission, and his new team. Also, it was fun to hear Davy Crockett dispel the myth about the time he wrestled a bear. I mean come on, folks. Nobody wrestles a bear and lives.

Adding a bonus of one-half a wormhole to the score for finally giving us an episode in which we don’t watch our heroes shake and shimmy in their seatbelts as the time machine cycles up. (I think showing it twice would have been plenty.)

It’s nice when bad guys can put aside their differences long enough to share an evil laugh.