TIMELESS and EMERALD CITY Have Been Cancelled After One Season 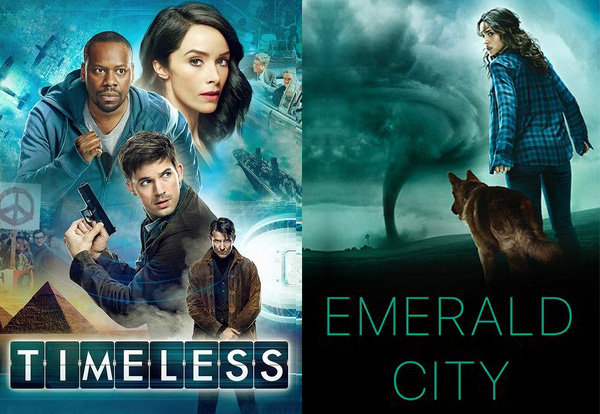 According to Variety, the NBC shows Timeless and Emerald City have been cancelled after one season. Just one season! The sci-fi adventure and Wizard of Oz retelling shows only made it to 10 episodes before NBC pulled the plug.

Emerald City‘s cancellation was announced a few days ago, citing lack of audience. Debuting in January, the show started with 4.5 million views but dipped to 2.9 million. The darker retelling followed character Dorothy Gale after a tornado sends her to the magical land of Oz. It was a long road for the show as well, slated to appear during 2014-2015. You can read our recaps of Emerald City here.

RELATED: You can read our Timeless recaps here

Timeless was cancelled today, also seemingly citing lack of audience, though it performed better than Emerald City. Averaging between 1.1 and 4.6 million viewers an episode, the sci-fi series wasn’t able to cut it on the network. The show followed 3 misfits – a soldier, a scientist and a historian as they followed a criminal to the past as he tried to destroy America as we know it.

It’s highly unfortunate that these shows were cancelled. They both had devoted fans and had appealed to many. NBC has been pulling a lot of shows lately so we can only wait to see what their next slate will contain. Now we wait to see if Powerless will also be pulled.

What do you think of the news? Were you a fan of either show? Let us know and be sure to come back to Geek Girl Authority for more TV news.