Thoughts on the Latest ‘Dark Tower’ Movie News and Rumors 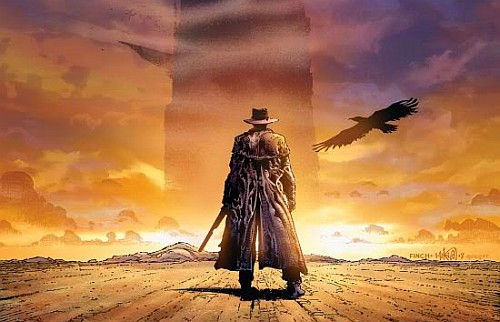 Rumors of casting for a movie adaptation of The Gunslinger, the first in Stephen King’s Dark Tower series of novels, have been swirling around for decades now. Yours truly spilled some ink in these pages last year, discussing possible casting for the novel’s main characters. But at least a few rumors have been officially put to bed, as official word went out today that the two main roles have been cast.

It’s official: The man in black fled across the desert and the gunslinger followed. #DarkTowerMovie @McConaughey @IdrisElba

King himself confirmed today via Twitter that what we had heard for several months now from various sources in the Intertubes is in fact true: Idris “Too Street to Play Bond” Elba will play the titular gunslinger Roland Deschain, and Matthew “AlrightAlrightAlright” McConaughey will play the chief antagonist, The Man in Black. (Not Johnny Cash: Roland’s adversary goes by Walter, or by Randall Flagg, or even Marten Broadcloak, depending on various circumstances.)

I can’t tell you how to feel about this. I can only tell you how I feel: confused, hopeful, aggravated, excited, nervous, nostalgic–with a little liberal white guilt mixed in for flavor. You see, Roland in the books is white. He’s frequently described by those in our world as resembling Clint Eastwood in his spaghetti-western prime. (Roland’s world is a nightmarish-beautiful post-apocalyptic world where gunslingers are like knights, where magic exists side by side with decaying futuristic technology, and where doors to our world can be found if you know where to look.) So as someone who thought that Elba would be AWESOME as James Bond, can I take issue at all with his being cast as Roland?

I would have thought so, originally. In the books, Roland draws three broken people from our world into his and trains them to be gunslingers, and one of these three is black: a beautiful, wealthy civil rights activist and double-amputee named Odetta Holmes. Odetta is seriously mentally fractured when we meet her, suffering from a split personality; the alter-ego that arises occasionally is Detta Walker, a cunning and spiteful creature with a hideous B-movie dialect that evokes the worst of the minstrel shows. Detta hates Roland–not least because he is white. The second book in the series, The Drawing of the Three, gives us Detta at her most dangerous, threatening Roland’s quest for the mythical Dark Tower and the life of Eddie Dean (also white) with whom Odetta has fallen in love.

In other words, issues of race percolate throughout the series of books. King tweeted back in December that “the color of the gunslinger doesn’t matter. What I care about is how fast he can draw…” Fair enough. Casting a black actor as Roland indicates at the very least that the screenwriter (Akiva Goldsman) will be adapting the story rather liberally. (Not in the political sense, of course.) The relationship between Odetta/Detta (later Susannah) and Roland will not be the same as it was in the books. So be it. These things happen in adaptations.

And frankly, Idris Elba will be totally sick as Roland. Awesome, badass, other synonyms for “great.” And McConaughey was the odds-on favorite to play The Man in Black for good reason: the actor’s appeal in loose charm lends itself well to playing the pseudo-immortal magician whose life’s work seems to be tormenting Roland.

So I’m feeling good about this casting. What worries me is the other rumors I’m hearing…

Apparently the movie will be subtitled “The Diamond City”…

They’ve cast Abbey Lee in the “female lead,” of Tirana…

Folks, I don’t know what’s going on exactly over there at Sony and Imagine, but this is looking less and less like a Dark Tower adaptation, and more and more like something new. Something loosely inspired by the books. First of all, Tirana is a character so minor that I (who have read these books multiple times) had to Google her–and it turns out she doesn’t even rate her own entry in the Dark Tower Wiki. Srsly.

As for the “Diamond City,” I’m pretty sure no such place was ever referenced in the books. The closest thing is the portion of the fourth book that takes place in a parallel-world Kansas and includes a fully materialized Emerald City, a la Oz. But Diamond City? Nope. Never heard of it.

So really, the cross-racial casting move is the least shocking thing about what I’m hearing. I’m radically adjusting my expectations for the film and assuming that it will be NOTHING like the books. And that might be okay. King himself seems to be on board, and I mostly trust him.

But then again, screenwriter Goldsman is responsible at least in part for the scripts of Batman & Robin, Lost in Space, I, Robot, and I Am Legend. So maybe “trust” isn’t the best option for Dark Tower fans…

Adam Sullivan is a marketing professional and a recovering actor. Find him on Twitter @adamsull. Be nice. He’s sensitive.