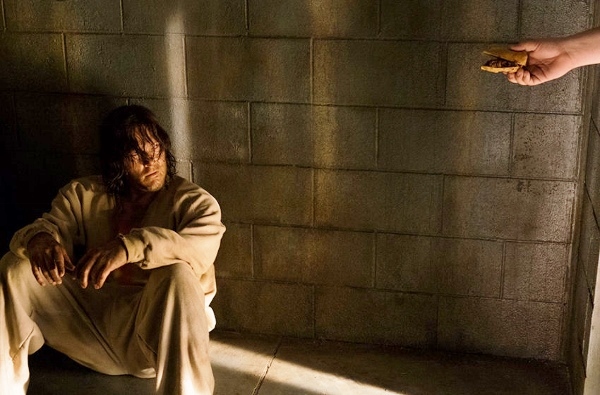 The Walking Dead continues with a look at the Sanctuary where Daryl is being held captive.  Negan has broken Rick to submission.  Can he break Daryl?

This was a hard one to watch and it moved pretty slow. This episode is a good introduction to Negan’s World.

Daryl met Dwight, Sherry and Tina in the burnt woods in Season 6.   Dwight stole Daryl’s crossbow and motorcycle after their encounter.  Dwight killed Denise in front of Daryl.  These two have a lot of history already. 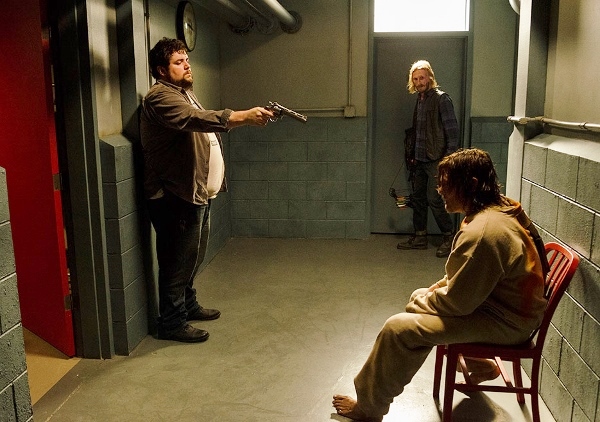 Daryl is being held in a concrete cell with no clothes.  He eats the sandwich that Dwight brings to him.  Dwight plays music for Daryl and it cause Daryl not to be able to sleep.

Daryl gets a jumpsuit.  He goes to see the doctor about his shoulder…remember that Dwight shot him in the shoulder.

Daryl meets Sherry (Christine Evangelista) again at the doctor’s office. She has just taken a pregnancy test that turned out negative.  Dwight is a little bothered by that. It turns out that Sherry used to be married to Dwight.

Daryl’s shoulder is healing well. The doctor tells Daryl that Negan will take care of him.

Sherry recognizes Daryl and tells him to do whatever he is told. Dwight stops her from talking to Daryl.

Sherry and Dwight are trying to make Daryl understand that the sooner he gives into Negan, the better his life will be. 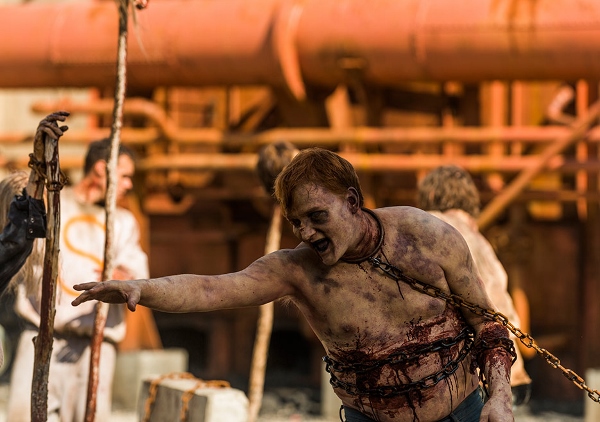 Daryl gets to go outside and see how men who defy Negan (Jeffrey Dean Morgan) live. They are wrangling walkers in the courtyard of the compound, or they are dead.

Negan is happy with the progress that Dwight has made with Daryl.  Negan offers to let Dwight see Sherry as a reward for his hard work. Dwight declines and says he doesn’t deserve it.

They get a call that someone has taken some stuff and ran.  Negan suggesting that someone else goes, saying it’s grunt work. Dwight insists on going after the deserter. 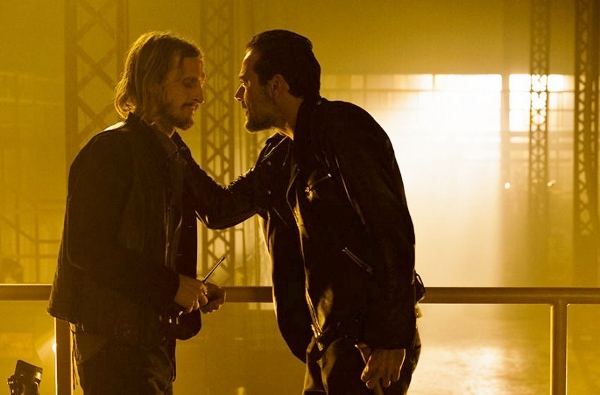 Dwight leaves and someone else is assigned to feed Daryl.  They leave the door open and Daryl escapes.  Sherry finds him and tells him to go back to his cell.  She tells him there is always something worse.  Daryl runs for the exit and Negan’s men are waiting for him. Negan walks up and shows Daryl that his men are loyal to him. He asks them who they are and they all answer “Negan.”  Negan tells Daryl that he is everywhere.  He gives Daryl three choices: die, live like he wants to die, or work for Negan and live well.   Negan takes a swing at Daryl with Lucille and stops at Daryl’s shoulder. Daryl never flinches.  Negan knows Daryl is strong and that’s what he likes about Daryl.  To teach him a lesson, Negan allows his men to beat up Daryl. 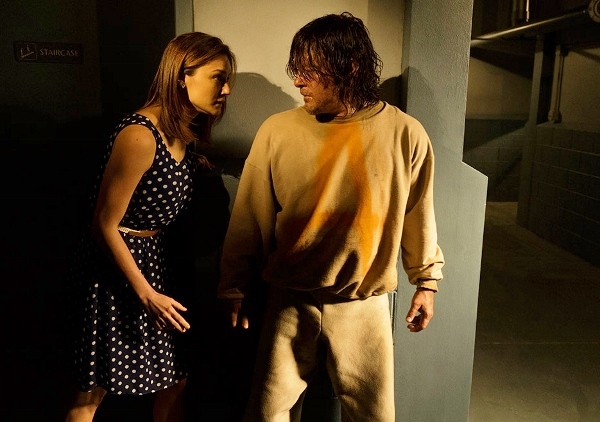 Dwight, wearing Daryl’s vest and driving Daryl’s motorcycle, finds walkers smashed on the road. The walkers are falling from the highway above.  Dwight falls and is almost bitten by walkers.  He escapes the walkers and continues to look for the deserter. 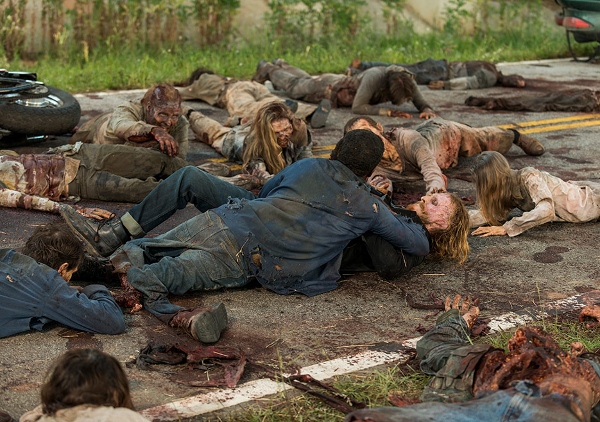 Dwight finds the runaway struggling with a walker.  The man tells Dwight that he doesn’t want to live under Negan’s rule anymore. He doesn’t understand why they allow Negan to rule them. There is only one Negan.  He asks why everyone else couldn’t overthrow Negan.  Dwight doesn’t want to hear what the man is telling him.  He is trying to make the man go back to the Sanctuary.  The man says he would rather die than go back to the Sanctuary. Dwight threatens to kill every one of his friends.  He even threatens to dig up his dead wife and feed her to the crows if the man doesn’t go back.  The man gives in and starts walking.  Dwight hesitates and shoots him. 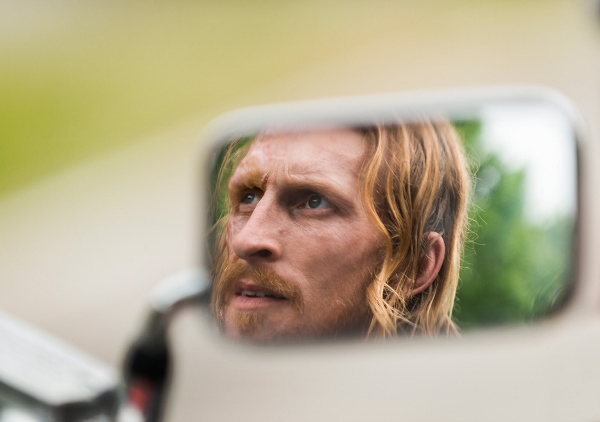 Later, Sherry visits Daryl in his cell. She tells him that she wishes she didn’t know the things she knows now.  Sherry apologizes for their first encounter.  She reminds Daryl that he told her that she would be sorry…she is.

The next day Dwight takes Daryl to see Negan.  Negan tells Daryl the story about his friendship with Dwight.  Dwight and Sherry were married.  Sherry had a sister, Tina who was diabetic.  Negan offered to marry Tina to take care of her. He got the medicine she needed to regular her diabetes.  Dwight took the medicine, Sherry and Tin and ran.  After Tina died, Sherry and Dwight went back to Negan.  They had to pay for the time spent to find them.  Dwight just asked that Negan not kill Sherry. Sherry offered to marry Negan if it saved them both.  To pay for running, Dwight was burned with an iron to his face.  Now Dwight is one of their top guys and he is totally cool with Negan.

Negan wants Daryl to be on of his top guys.  He likes Daryl. Negan offers Daryl a room with a window, a bed, a small kitchen, and clothes.  Daryl has to answer one question.  Who is he? 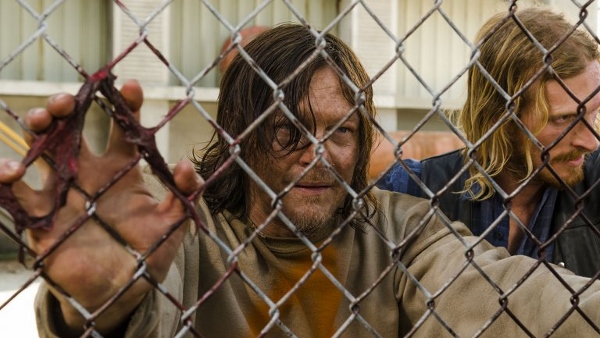 Dwight takes him back to his cell. He yells at Daryl that he will end up in that room or hanging on the fence.  Daryl says Dwight took Negan’s deal because he was thinking of someone else.  And that’s why Daryl can’t take Negan’s deal.

Dwight goes outside and sees the runaway hanging on the fence.

Like i said, the episode moved pretty slow.  Negan knows how to find people’s weaknesses and use those weaknesses to get what he wants.  It’s amazing to me that one man is able to control so many people with the talk of fear.  If you’ve read the comics, you know how far his power stretches.  Yet, I’m sure that Gordon is not the only person to think that the people can rise against Negan.  And I’m sure this is not the last that we hear of a plan to overthrow Negan. The question is, when?  Negan was obviously testing Dwight when he offered to let him spend some time with Sherry.  He’s a smart man  So it will take more than one equally smart man to stop Negan…right?

Since Daryl is not in the comics, his story at Negan’s sanctuary is new to everyone.  He is the cause of Glenn’s death and takes full responsibility for it.  His guilt is what is keeping him from giving in to Negan.  If Daryl were to give in, then Glenn’s death would mean nothing.  It would mean that Glenn meant nothing to Daryl.  And Daryl is enduring the torture because he believes he deserves it.  So it could be a while before we see Daryl released from Negan’s cell.

Next week’s episode will finally show how Rick and the gang are dealing with Glenn and Abraham’s deaths. And…Negan pays Alexandria a visit.