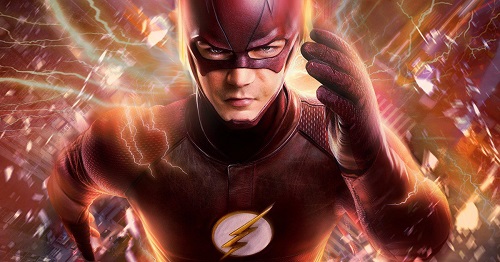 This week on The Flash! Jesse and Harrison “Harry” Wells return to Central City as the team discovers another metahuman from Flashpoint that has crossed over into their timeline.

But first….Barry (Grant Gustin) and Iris (Candice Patton) go on their first date.  And it’s awkward.  Barry is trying really hard to impress Iris with flowers and an expensive dinner, but he gets called away, not once, but twice.  The second time, he and Iris returned to Star Labs where a portal has opened up.  Dr. Harrison Wells (Tom Cavanagh) returns to Central City, but he’s not alone.  Jesse Wells (Violett Beane) enters immediately after him…and she’s a speedster.

The dark matter that she and Wally West (Keiynan Lonsdale) were exposed to gave Jesse super speed just like Barry.   Wally is a little upset because he didn’t get any super powers after the accident.  Joe consoles him, but all the attention that Jesse and Barry get for being speedsters is not helping. 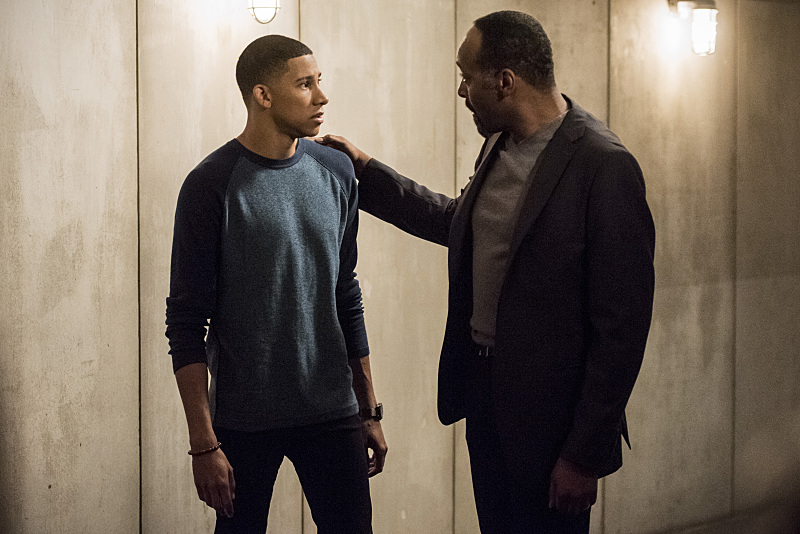 As soon as Harry arrives, he knows something is different.  He reprimands Barry for his time traveling adventures.  Since Harry and Jesse are from Earth 2, the timeline change didn’t affect them.  They remember the world the same as Barry does.

Frankie Kane (Joey King) is watching TV when her foster dad returns home from work.  He’s angry because his dinner’s not ready and he takes it out on Frankie.  Frankie gets nervous, but something in her clicks.  Her eyes turn a purplish-magenta color.  She says to herself that Frankie has left.  At that same moment, a streetlight falls into their apartment, knocking out her foster dad.

The next day, Cisco (Carlos Valdes) and Caitlin (Danielle Panabaker) assist in Jesse’s test, but Harry insists on running more tests. They figure out that he is stalling.  He is afraid because Jesse has super powers.  He asks Caitlin to talk to Jesse, but Caitlin insists she knows nothing about having powers and runs away. 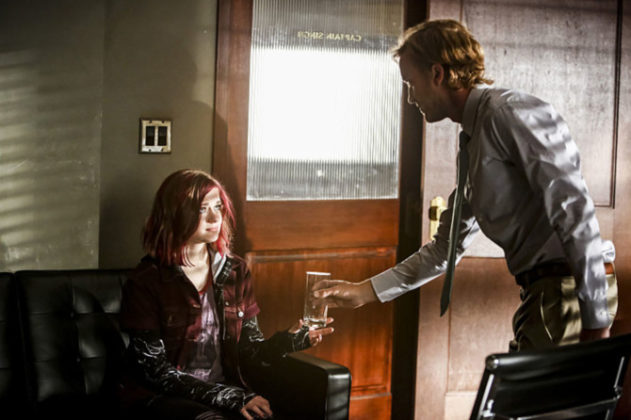 Joe is talking to Frankie about the accident that put her foster dad in the hospital.  She said she blacked out.   Barry stops in to tell Joe that he thinks the accident was caused by a meta-human.  Julian Albert sees Frankie sitting in Joe’s office and takes her glass of water.  He tests Frankie’s DNA off of the glass for an element that he found on the husks and on Edward Clariss.  Frankie’s DNA is positive for the unknown element.

Julian goes to confront Frankie about attempting to kill her foster dad.  Frankie gets nervous and the other girl takes over.  She is Magenta and she can control metal objects.  Magenta lifts a large metal mural on the wall and causes it to fall.

The Flash arrives just in time to save Julian and goes after Magenta.  He tries to talk to Frankie, but Magenta insists she is not there.  Barry mentions Alchemy, and Magenta recognizes the name.  He tells her he can help her, but she doesn’t want the Flash’s help.  She throws a car to distract The Flash and runs away.

Magenta tells Alchemy saying she can’t get rid of Frankie.  She went out to find Alchemy so that she could get her powers back and get rid of her foster dad. She didn’t want what happened to her in Flashpoint to happen to Frankie, but Magenta wants to get rid of Frankie too.  Frankie is weak and without her, no one will ever hurt either of them. 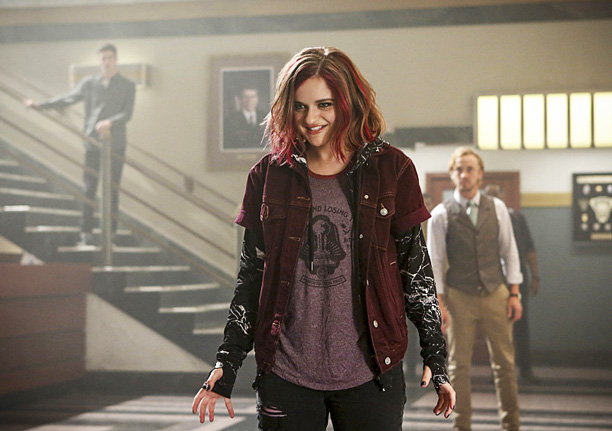 Back at Star Labs, the team reveals their research on Frankie and deduct that she is trying to kill her foster dad for being abusive.  Barry tells them that she recognized the name Alchemy, so chances are that she existed in Flashpoint.

Caitlin goes to talk to Jesse on behalf of Harry and it doesn’t go so well.  Jesse gets angry and leaves and Wally goes after her.  He asks her how she got her power.  She tells him she was trying to avoid getting hit by a car when her speed kicked in.  So Wally jumps into the street hoping the same thing will happen to him.  Jesse saves him just in time.

When Jesse and Wally get back to Star Labs, Barry yells at Wally for being careless…Jesse  and Caitlin both yell at Harry for holding back Jesse.  Caitlin tells Harry to be encouraging or risk pushing Jesse further away.

Harry and Barry talk about their cycle of mistakes. They relate to one another because they have good intentions, but their actions only hurt those they love.  (I thought we covered this last week???) 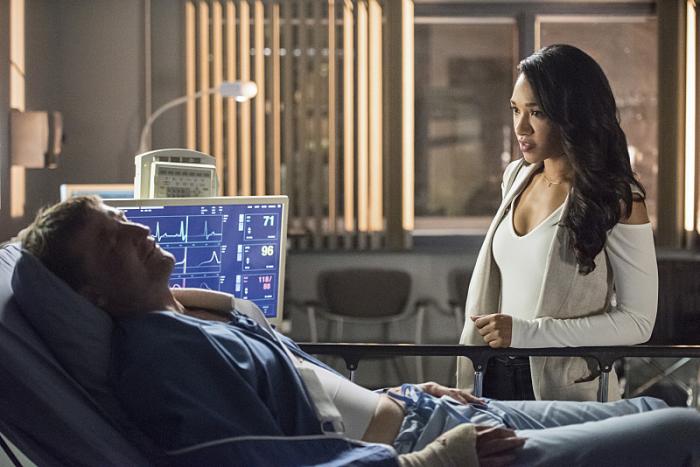 Iris, being the investigative reporter that she is, visits Frankie’s foster father in the hospital to talk about Frankie.  He threatens to make Frankie pay, causing Iris to realize that he is in danger.  Frankie is coming after him.  Just when she moves into action to protect him, Frankie is already moving a tanker to drop on the hospital.

Iris’ watch alarm goes off, warning the team of the danger she is in and Barry goes into action.  He uses his speed to keep the tanker from falling, but he can’t stop to talk to Magenta.  Harry gives Jesse his blessing and sends her to help Barry. 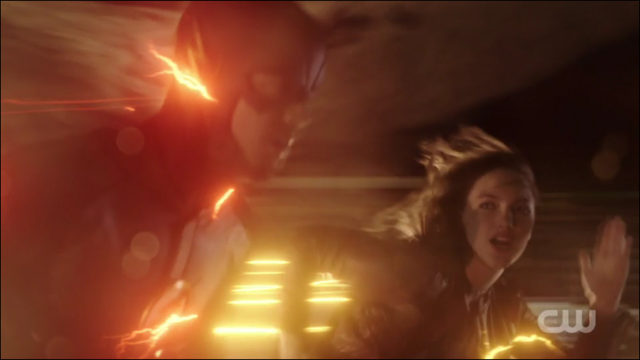 Barry tells her that her foster dad’s anger is not her fault…she’s a good person…don’t turn to the dark side…she’s stronger than she thinks….yada yada yada….and she moves the tanker away from the hospital.

Frankie is truly sorry for hurting people. the gang reassures her that it’s not her fault. Caitlin found a good home for Frankie and they send her on her way.  But not before asking her how she got her powers.

She said she had dreams of another life that were painful.  Then she started hearing a voice that told her he could make her powerful again.

Wally is bummed that he didn’t get powers, but he’s slowly accepting it. 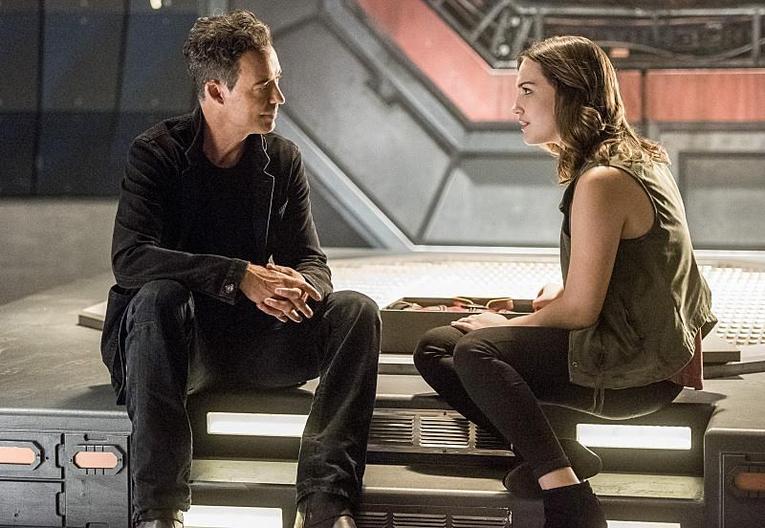 Harry gives Jesse her speedster name…Jesse Quick…and her custom made speedster suit. She says she was only able to help because she knew Harry believed in her.   Harry admits that his fear and guilt has held them back.  He’s always going to worry and always going to ask her to be cautious, but now it’s time for Jesse to be a hero.

Iris and Barry try their date again.  Barry says their first date was boring bc they were trying to be other people. They have to be who they really are for the date to be amazing.  Their date gets interupted again when  Joe calls Barry into the station.  Joe and Julian are looking at a security tape of Alchemy killing Edward Clariss.  Julian asks him if he believes in ghosts???? (Weirdo). 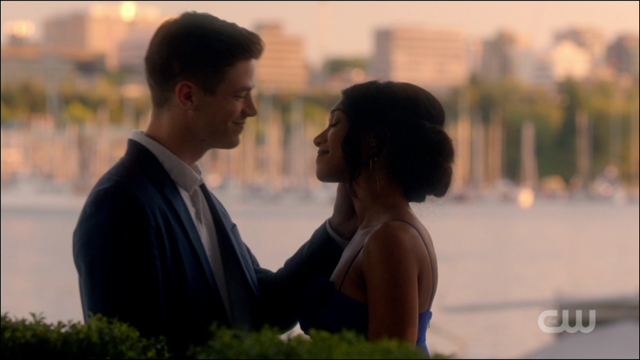 A bit of a slow down for the show, but it’s to be expected.  Magenta wasn’t as threatening as I thought she would be…she was actually kind of annoying.  And they basically swept her under the rug instead of putting her away like they would have with other bad metahumans.

It was great to see Harrison Wells and Jesse, but enough with the brooding Wally.  It’s time for him to discover his place on the team.  He’s always an outsider looking in, even with Iris and Joe. How long will it be before he turns on the group if he doesn’t have a place on the team?

And Julian!! I just know he’s a metahuman, maybe he’s alchemy.  He didn’t exist in the previous-regular timeline or in Flashpoint.  And he’s always in Barry’s business!  I’m excited to see who he really is.