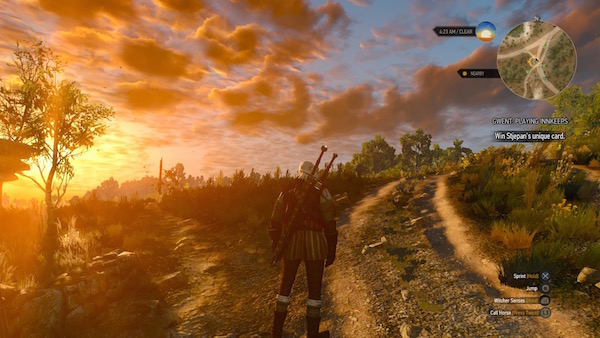 What a gorgeous game. The trees! The sky! The characters! I’m still so giddy about current-gen graphics. When I first started playing The Witcher 3, I was reveling in the beauty of the opening scenes, feeling really excited… until I harvested a plant and squinted at the loot window. Why is all the text so freaking small?!

Upon searching, I quickly learned I was not the only one annoyed by this tiny text issue and CDPR is has a fix in the works, so I’m anxiously awaiting that. We just won’t talk about how close my couch is to the TV.

[Update: I just installed patch 1.03 on my PS4 and the loot window is larger but all the other text remains small for now.]

So far, I love this game. A lot. It’s so huge I want to simultaneously take my time and savor everything but also race through and devour it. Fortunately, it seems to be in the player’s best interest to go slowly and relish the experience.

As I’ve now completed just about everything that can be completed in the Prologue and barely scratched the surface of Act 1, I wanted to pause and share my first impressions of The Witcher 3: Wild Hunt. Onward!

The Basics
If you are new to the series, you should know that the main character, Geralt, is a Witcher, The Witcher, a human who has been genetically mutated to be a superior monster slayer. He fights the foul creatures with swords, magic and various potions and bombs. There’s a ton of lore and backstory that explains so much more, but the game has some great animations explain it for you.

The World
Contrary to what I thought, because clearly I was paying attention in the last game, the Wild Hunt is not a safari in the wilderness to bring down impressive game but rather a squad of specters who appear in the sky as a bad omen or a harbinger of death. Still, there’s a fair bit of venturing off into the wilderness. And the wilds are… pretty wild. I do a lot of map checking because even with the mini-map I get all turned around and end up jogging in circles.

It’s open world! After being confined to small yet confusing areas in TW2, Wild Hunt is a huge breath of fresh (albeit sometimes stinky from rotting corpses) air. Not gonna lie, every time I hear a game is going to be open-world, I automatically think it’s going to be like Skyrim, where I can run non-stop from Solitude to Riften if I so desire. Skyrim was my first experience with open-world. Hey, I was a late bloomer. Sort of. But I’ll save that story for another time. Wild Hunt is more quasi open-world. You can’t run from Novigrad to White Orchard; each area is open and you can fast travel between and also within each area. However, you can’t just open the world map and pick a destination. You can only fast travel between signposts, even within one area, which means you first have to find the nearest post.

Geralt does have a horse to get around faster, and the auto-ride function when you’re on a road is handy. But I prefer being on foot, at least during the first few hours of play. (A sneak peek into Velen tells me I will change my tune very quickly.) Still, the horseback riding is smooth and being able to summon the horse from anywhere is convenient, even if it shares a name with my least favorite bug. Fine, I’ll say it: Roach. Ew.

Game Menus
The inventory screen: What a fustercluck. I can tell it’s probably a breeze for PC players who can mouse around and point-and-click, but those of us on consoles are stuck with left-sticking through an ever-expanding number of items in a grid layout that has no apparent organization. There’s a header category called Usable Items, which contains basically everything that’s not weapons or armor.

Alchemy has improved in that once you make a potion you need never make it again. As long as you have the ingredients, potions, bombs and oils will replenish automatically upon meditating. Less to keep track of: I approve.

The quest journal is divided into Main, Secondary and Contracts. Organization, yay! And of course you can choose which quest you want to track or sometimes even which objective you want to track if there are multiple objectives/options for a quest.

The Glossary and Meditation menus are simple enough, which brings us to the Character menu. The most important thing to know here is that spending an ability point to level something does not mean said ability is active. You first have to move it into the character tree. Even knowing this, I forgot to drop in my Axii power up so I missed a Delusion opportunity during a conversation. Hmm, that may have been in Act 1, but whatever the point still holds true. No pun intended.

Speaking of ability points, go and find ALL the Places of Power; you get an ability point just from drawing from one.

Fighting
Combat in Wild Hunt is super fun and challenging. It’s similar to TW2 (I think), but it feels much more satisfying – especially after I took some time to learn how to properly parry and counter-strike. (Hint: L2 when the enemy’s health bar flashes). Usually when I start a new game, I just go in guns, er, swords blazing and figure out the fighting as I go, but a little patience makes for a lot less dying

And, in typical Witcher fashion, just reference the Bestiary and queue up the best Sign, (other than the obvious Quen) and usable items to help you out with each monster.

Um, I haven’t yet figured out how to properly fight on horseback. Right now I just flail a bit, swiping at air until I get bucked off.

Witcher Senses
Geralt can use his badass witcher senses basically anytime – except during combat because then L2 becomes parry – and it’s very cool. The sounds change, the visuals change and there are visuals for distant sounds. How synethesiastic! Witcher senses can be used to find loot, track prints, know what sort of creatures are surrounding you in the distance and even to eavesdrop on Drowners, which kinda remind me of Clickers for some reason, but not as scary.

Bringing it to Life
The music is beautifully haunting and perfect. But… it just plays too constant and too often. I turned off the music after a few hours in White Orchard. While quite lovely, it just became a tiresome, repetitive loop and I got more out of hearing the sounds of nature than the same mournful melody.

The voice acting in Wild Hunt is so far superior to TW2 that it definitely warrants a shout out. Some of the line readings in TW2 made it feel dated and disconnected. The NPCs in Wild Hunt are much more believable and real and it’s not just their lustrous, swaying locks. With the exception of hearing the same dialogue trigger Every Single Time you pass certain peasants, it’s nice to hear more natural, conversational dialogue between Geralt and the NPCs, even if it’s just an innkeeper telling you to have a look at her inventory.

Better than swaying hair is the fact that time passes – as it should in an RPG, am I right? (Sorry, Dragon Age: Inquisition. I still love you tho.) The world is dynamic: the weather changes, the lighting changes, and you can still meditate as in the other game if you want to jump to a specific time of day or night. Oh and Geralt’s beard grows also to show the passing of time. Which reminds me I need to find where the nearest barber is.

Gwent
I wasn’t going to write about Gwent because I didn’t give it fair chance at first and usually I’m not a mini-game kind of player. But it is totally fun! Once you know what’s going on, that is. It makes me want to play nerdy card games IRL.

I won’t go into the mechanics; you should hit up that scholar in White Orchard who will teach you how to play. However, I will admit the dumbest, most embarrassing mistake I made at first was not realizing that the cards you draw are the only cards you have for ALL THREE ROUNDS. Sure, if you win a round you get an extra card and there are special cards that allow you to get a few more in your hand, but mostly, um, don’t use all your cards in the first round.

That’s it for now! I haven’t mentioned much about the story because, well, I’m not that far along yet. All I know is I am looking for Ciri. And I would love to eventually touch on a lot more (characters, lore, sex), but these are just some thinky-thoughts from the surface level. Now I’m going back to Velen! Damn that area is big.

Amy Mullins is a gamer, seeker and all around nerdy chick.